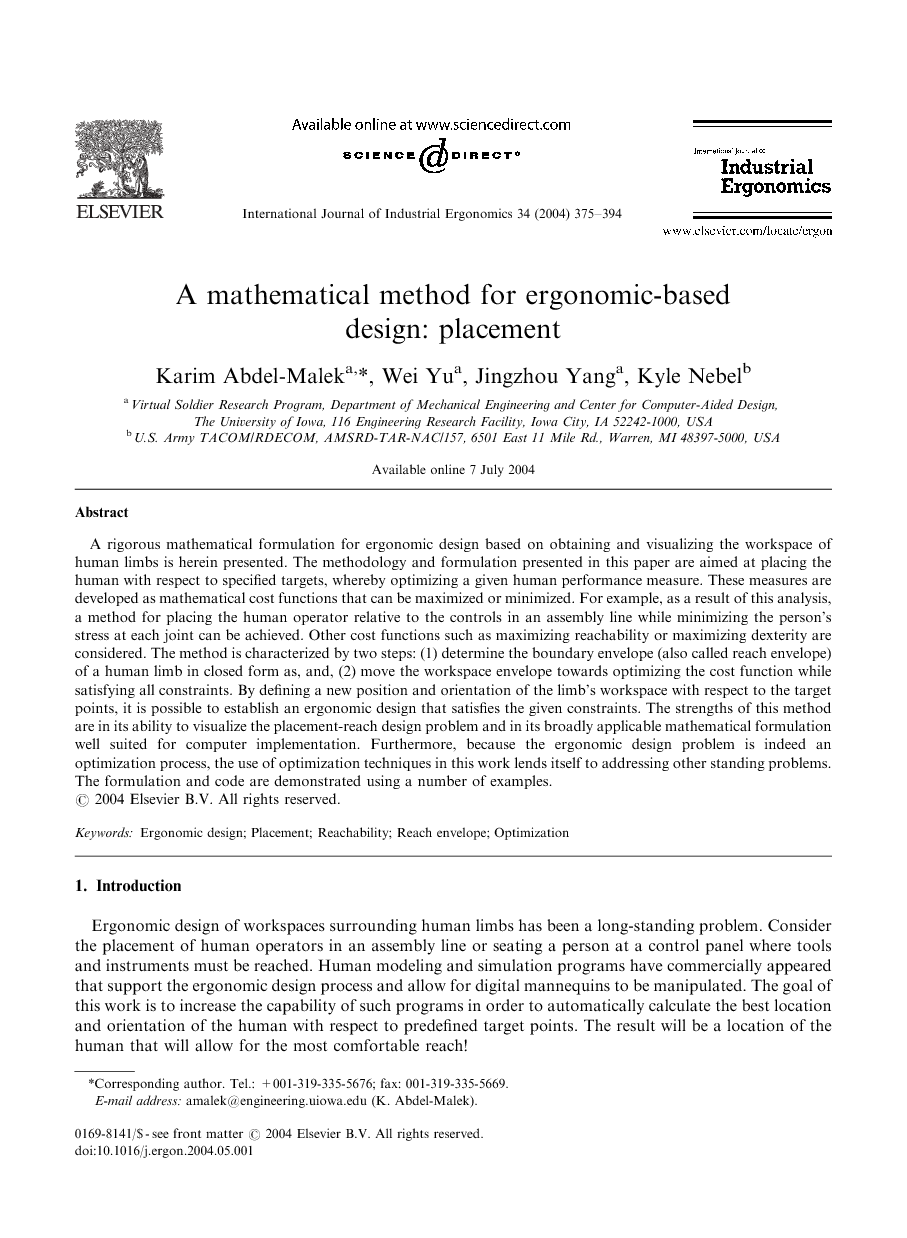 A rigorous mathematical formulation for ergonomic design based on obtaining and visualizing the workspace of human limbs is herein presented. The methodology and formulation presented in this paper are aimed at placing the human with respect to specified targets, whereby optimizing a given human performance measure. These measures are developed as mathematical cost functions that can be maximized or minimized. For example, as a result of this analysis, a method for placing the human operator relative to the controls in an assembly line while minimizing the person's stress at each joint can be achieved. Other cost functions such as maximizing reachability or maximizing dexterity are considered. The method is characterized by two steps: (1) determine the boundary envelope (also called reach envelope) of a human limb in closed form as, and, (2) move the workspace envelope towards optimizing the cost function while satisfying all constraints. By defining a new position and orientation of the limb's workspace with respect to the target points, it is possible to establish an ergonomic design that satisfies the given constraints. The strengths of this method are in its ability to visualize the placement-reach design problem and in its broadly applicable mathematical formulation well suited for computer implementation. Furthermore, because the ergonomic design problem is indeed an optimization process, the use of optimization techniques in this work lends itself to addressing other standing problems. The formulation and code are demonstrated using a number of examples.

Ergonomic design of workspaces surrounding human limbs has been a long-standing problem. Consider the placement of human operators in an assembly line or seating a person at a control panel where tools and instruments must be reached. Human modeling and simulation programs have commercially appeared that support the ergonomic design process and allow for digital mannequins to be manipulated. The goal of this work is to increase the capability of such programs in order to automatically calculate the best location and orientation of the human with respect to predefined target points. The result will be a location of the human that will allow for the most comfortable reach! We propose a general numerical approach for the design of an environment wherein a number of points to be reached (called target points) are specified and where a mathematical method is developed to position and orient the limb's origin (e.g., the torso if the arm is considered). Used iteratively, the method presents an effective mathematically based approach to ergonomic design. Because of its analytic nature, visualization of the limb's reach envelope and placement are readily made available to the designer and are well suited for computer implementation. Thus far, the idea of introducing a mathematical model for ergonomic modeling of human motion was unforeseeable. For example, a method for the determination of ergonomic parameters that relate people to objects in space was proposed by Costa et al. (1997). The authors state that mathematical models of human movements are complex to define and hard to solve and suggest the use of Artificial intelligence in Neural Systems (ANS) as an approach to the problem. Indeed, collection of data for simulation of human movement has been done by many researchers (Ciungradi et al., 1998), but there has never been a fundamental approach for optimizing the placement of a human operator. Furthermore, the study of human motion has led designers to produce ergonomic-based workstations, by addressing work postures, work height; adjustable chairs; foot/hand use; gravity; momentum within normal work area (Konz, 1990), all in an experimental manner, which is costly and is difficult to use in a design scenario (i.e., difficult to implement optimization methods for design). The proposed work will provide a viable venue to address such issues. The torso and upper extremities have been modeled as four-link systems consisting of trunk, upper arm, lower arm, and hand, being regarded as a redundant manipulator with a total of eight degrees of freedom (DOF) (Jung et al., 1992; Jung and Park, 1994; Jung and Kee, 1996). The authors stated that inverse kinematics were used for solving the system and that the joint range availability was used as a performance function in order to guarantee local optimality (Jung and Park, 1994). Inverse kinematics is an expression given to the mathematics used in calculating joint variables given the position and orientation of the end-link (e.g., hand). While inverse kinematics of an eight DOF system is not only difficult to obtain, but is also not reliable because of the many redundant solutions that may arise. Indeed, the concept of inverse kinematics in reachability analysis and ergonomic design should only be considered for non-redundant systems. Before defining the problem, we introduce terms that are necessary for this discussion. 1. Specified point (sp): a point embedded into the limb (e.g., the tip of a finger) whose motion will be tracked (Fig. 1a). Target points (pi): are points defined in space and are to be touched by the specified point on the human limb as shown in Fig. 1a. 3. Base coordinate system (BCS): is the first coordinate system in a series of consecutively numbered triads (Fig. 1a). The goal is to place the BCS such that the limb will satisfy the given constraints (e.g. reach all points, or maximize a given function). 4. World coordinate system (WCS): is a fixed invariant global coordinate system. 5. Workspace envelope: is an envelope that encloses the totality of points that can be touched by the specified point sp on the limb [also called the Reach Envelope (Molenbroek, 1998)]. 6. Drive the workspace: is an expression used to characterize impelling (causing a motion) of the workspace to minimize/maximize a cost function and will be used throughout this work to denote the repositioning and reorienting of the human. 7. Cost function: an objective function used in the optimization.

Ergonomic design has depended upon trial and error and vastly on empirical data, whereby experience and rules of thumb are used. Nevertheless, it is widely understood that ergonomic design is indeed an optimization problem with many parameters. This paper presents a mathematical approach to ergonomic design using well-established methods in optimization and workspace analysis. It was shown that the workspace envelope of any human limb is rigorously identified using criteria developed from the row rank deficiency of the Jacobian, while taking into consideration ranges of motion. These ranges are imposed in terms of inequality constraints that are converted into equality constraints. The boundary surfaces/curves are determined in closed form and readily visualized. Boundary surface patches (or curve segments) were delineated. Placement of a person in the environment is performed by driving the workspace towards the target points using the cost function and subject to a set of constraints. The result is an ability to visualize the limb's workspace envelope in 3D and to mathematically explore operations that can be conducted on this workspace. Because of the closed-form nature of these surfaces, it was shown that an ergonomic design is achieved based on a cost function and constraints defined by the user. For example, if the objective is to have the arm reach all points in the workspace, then the distance function to target points can be used. If the goal is to place the human such that he/she can reach a number of points while minimizing stress on each joint, a different cost function is imposed. The result is a placement of the workspace envelope (and hence the human) such that the cost function is optimized. The motivation for such work stems from a need for accurately designing furniture, workstations, assembly lines, vehicle interiors, and general ergonomic workspaces. Whether for the design of control rooms, the placement of instrumentation and gauges, or for the design of furniture, this method will yield accurate mathematically-based results. The potential for this work to play a key role in other fields is relevant. Future implementation of this work is aimed at designing the workspace to minimize repetitive motions that may over time lead to injuries, and to place humans while minimizing low back pain. This group is currently developing analytic models of such cost functions. The formulation developed herein was illustrated through examples of the upper and lower extremities with various cost functions.