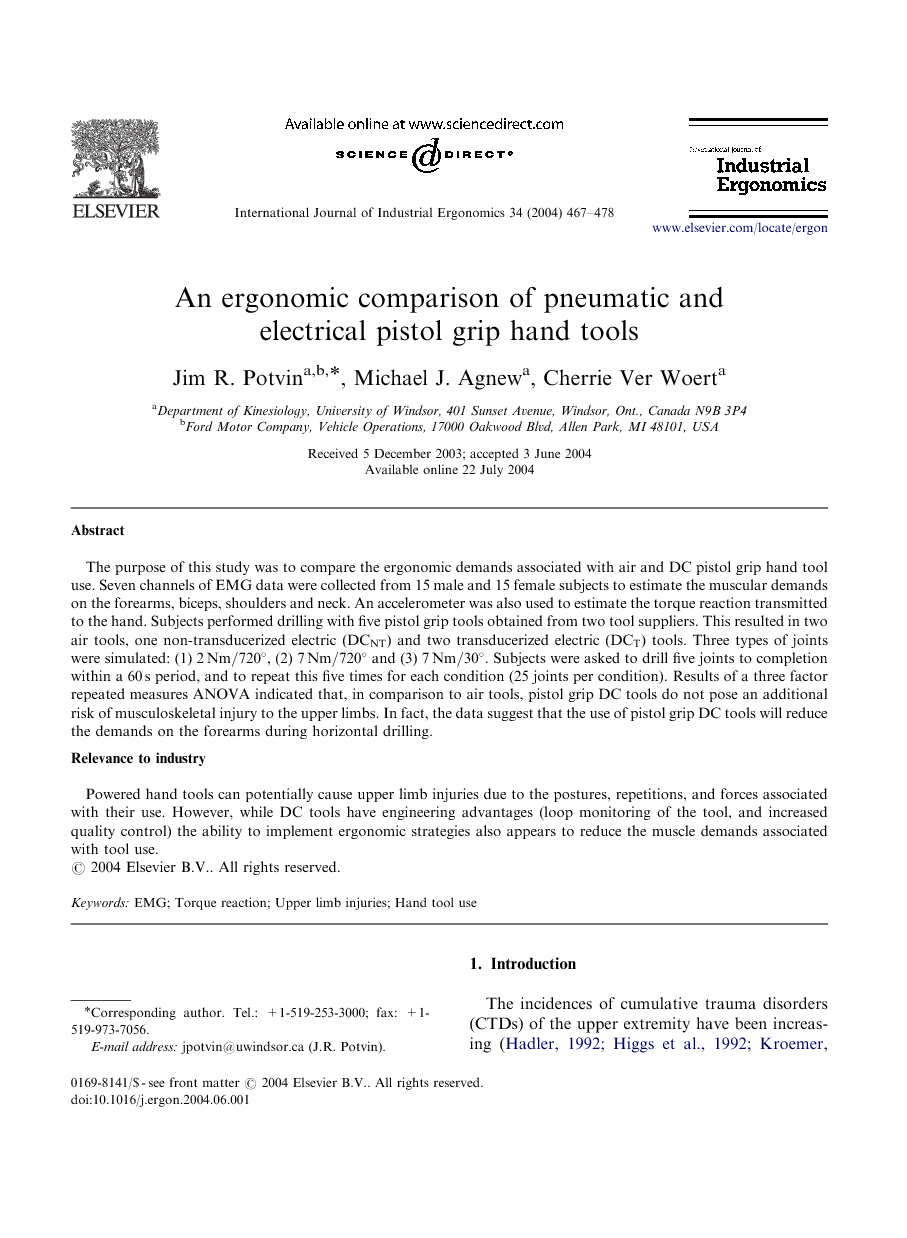 The purpose of this study was to compare the ergonomic demands associated with air and DC pistol grip hand tool use. Seven channels of EMG data were collected from 15 male and 15 female subjects to estimate the muscular demands on the forearms, biceps, shoulders and neck. An accelerometer was also used to estimate the torque reaction transmitted to the hand. Subjects performed drilling with five pistol grip tools obtained from two tool suppliers. This resulted in two air tools, one non-transducerized electric (DCNT)(DCNT) and two transducerized electric (DCT)(DCT) tools. Three types of joints were simulated: (1) View the MathML source2Nm/720∘, (2) View the MathML source7Nm/720∘ and (3) View the MathML source7Nm/30∘. Subjects were asked to drill five joints to completion within a View the MathML source60s period, and to repeat this five times for each condition (25 joints per condition). Results of a three factor repeated measures ANOVA indicated that, in comparison to air tools, pistol grip DC tools do not pose an additional risk of musculoskeletal injury to the upper limbs. In fact, the data suggest that the use of pistol grip DC tools will reduce the demands on the forearms during horizontal drilling. Relevance to industry Powered hand tools can potentially cause upper limb injuries due to the postures, repetitions, and forces associated with their use. However, while DC tools have engineering advantages (loop monitoring of the tool, and increased quality control) the ability to implement ergonomic strategies also appears to reduce the muscle demands associated with tool use.

The incidences of cumulative trauma disorders (CTDs) of the upper extremity have been increasing (Hadler, 1992, Higgs et al., 1992 and Kroemer, 1992), and have become a major problem facing industry (Flinn-Wagner et al., 1990 and Hadler, 1992). It has been reported that work-related upper extremity disorders were the cause of 13% of illness cases involving lost days from work and 69% of the total illness cases reported in 1994 (Lowe and Freivalds, 1999). Repetitive occupational tasks, such as a drilling, can result in acute or chronic tissue injuries. A number of factors related to these tasks have been identified as increasing the risk of sustaining CTDs, including: force, frequency, duration and posture (Armstrong et al., 1986; Putz Anderson, 1988; Moore et al., 1991). These factors can also interact to magnify the risk of injury (Silverstein et al., 1986 and Silverstein et al., 1987). Powered tools are very common in automotive manufacturing and, while they can increase a worker's capacity, they can also be associated with an increased risk of injury due to their heavier weight, increased vibration and increased work rate when compared to manual tools (Chang and Wang, 1997). Ford Motor Company currently has ample data on Pneumatic power tools due to the predominant usage in their assembly plants. Pistol grip tools, on average, comprise 40% of all hand held power tools in a plant. The average number of power tools in a plant is 960 (included are pistol grip, right angle, crows foot and tube nut tools) (Hagg et al., 2000). Van Bergeijk (1987) found that the average Ford Motor Company factory in the US required 55% of the workers to use powered hand tools, and that 75% of these tools were screwdrivers and nutrunners. Fennigkoh et al. (1999) note that, despite the prevalent use of power tools in industry, there is little data in the literature to indicate the ergonomic risks associated with their use. Pneumatic (air) systems have long been the most prevalent means of powering hand tools in automotive manufacturing. More recently, however, electrical tools are also starting to be integrated into these environments. While electric (DC) tools are a fairly modern technology, they possess several distinct characteristics that differentiate their usefulness from traditional pneumatic (air) tools. A pneumatic tool typically has a mechanical clutch that shuts the tool off once an approximate torque is reached. However, there is no assurance that the torque has been achieved with a pneumatic clutch type tool unless the tool is fitted with a transducer and monitor. Even if an air tool is fitted with a transducer and monitor, it still is not a closed loop system. The only way to have a closed loop system with an air tool is to fit it with a transducer, monitor/controller and a solenoid valve that shuts the air off to the tool when the desired torque is reached Lindqvist (1997). Conversely, DC tools can be transducerized to allow for the recording of tool angle and torque. These data can be used to refine the control of final joint angles and torques. In addition, recorded data can also be used as feedback in servo systems that can incorporate programmed strategies to reduce the ergonomic impact of the torque reaction at the end of a cycle. Thus, DC tools and their supporting hardware/software act as a “closed loop” system. However, a potential disadvantage of DC tool use is that they tend to be heavier than air tools. Thus, there is currently no clear answer regarding the ergonomic implications of switching from air to DC tools on the risk of upper limb musculoskeletal disorders. The purpose of this study was to determine if differences exist between the ergonomic demands associated with air and DC pistol grip hand tools during the run-down of horizontal joints.