عنوان انگلیسی
Trackball modification based on ergonomic evaluation: a case study in the sociology of ergonomics in Israel
دانلود فوری مقاله + سفارش ترجمه 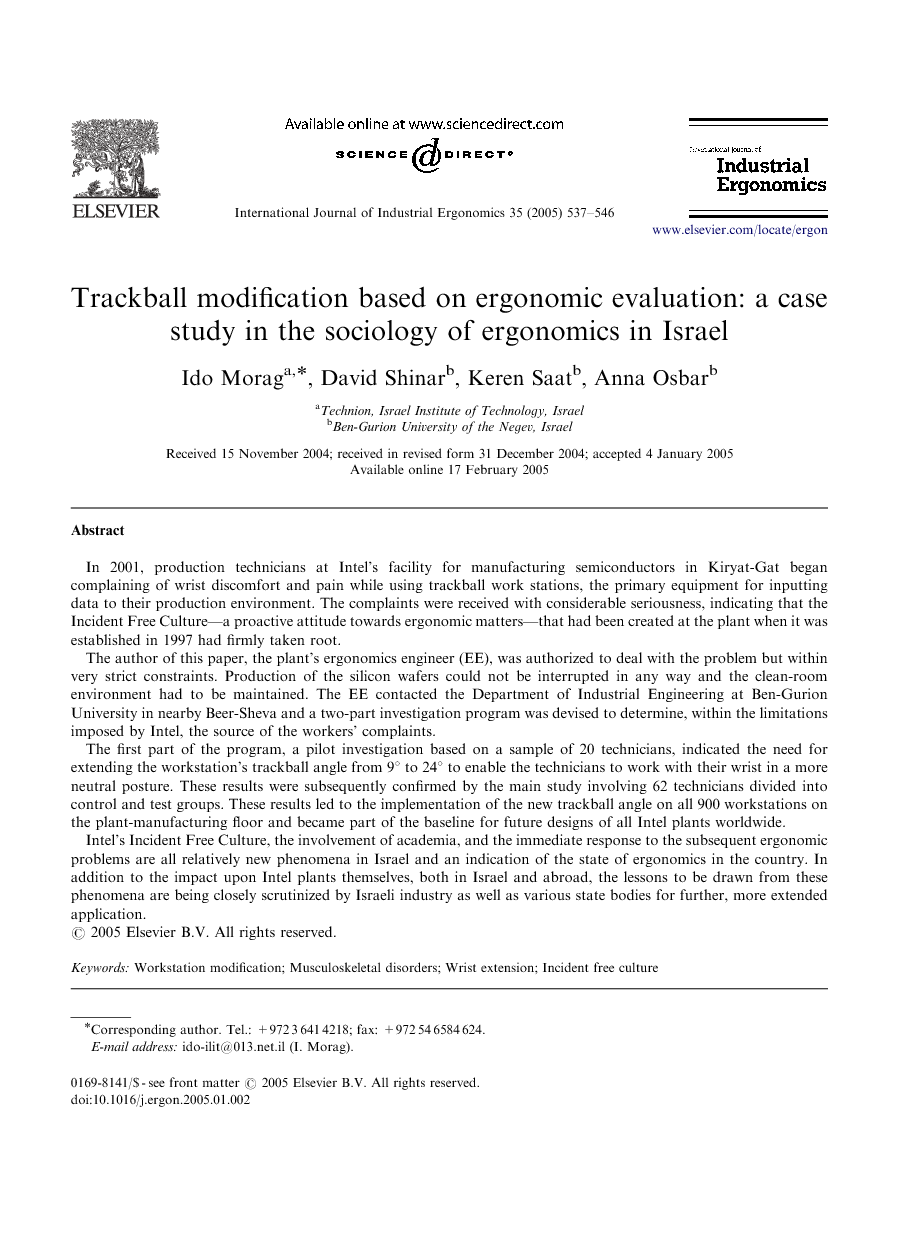 In 2001, production technicians at Intel's facility for manufacturing semiconductors in Kiryat-Gat began complaining of wrist discomfort and pain while using trackball work stations, the primary equipment for inputting data to their production environment. The complaints were received with considerable seriousness, indicating that the Incident Free Culture—a proactive attitude towards ergonomic matters—that had been created at the plant when it was established in 1997 had firmly taken root. The author of this paper, the plant's ergonomics engineer (EE), was authorized to deal with the problem but within very strict constraints. Production of the silicon wafers could not be interrupted in any way and the clean-room environment had to be maintained. The EE contacted the Department of Industrial Engineering at Ben-Gurion University in nearby Beer-Sheva and a two-part investigation program was devised to determine, within the limitations imposed by Intel, the source of the workers’ complaints. The first part of the program, a pilot investigation based on a sample of 20 technicians, indicated the need for extending the workstation's trackball angle from 9° to 24° to enable the technicians to work with their wrist in a more neutral posture. These results were subsequently confirmed by the main study involving 62 technicians divided into control and test groups. These results led to the implementation of the new trackball angle on all 900 workstations on the plant-manufacturing floor and became part of the baseline for future designs of all Intel plants worldwide. Intel's Incident Free Culture, the involvement of academia, and the immediate response to the subsequent ergonomic problems are all relatively new phenomena in Israel and an indication of the state of ergonomics in the country. In addition to the impact upon Intel plants themselves, both in Israel and abroad, the lessons to be drawn from these phenomena are being closely scrutinized by Israeli industry as well as various state bodies for further, more extended application.

At Intel's semiconductor manufacturing plant in Israel, an occupational ergonomic program was designed to create an ‘Incident Free Culture’ (IFC) on a plant-wide basis at the time of the plant's establishment in 1997. The IFC was a major ergonomic landmark for Israel at the time. Unlike many other programs that Intel and other Israeli firms have implemented through the years, this program was not established as a response to a high level of local injury rates, but was integrated into day-to-day work procedures. This ergonomics-based approach to developing a risk-free environment involved a radical change in the way employees and management regarded themselves in the context of their immediate work environment. The approach, which embraced the totality of the plant's social and cultural structure, led to the development of a mindset in which all employees became aware of the necessity for caring for their own and each other's health and well-being (Morag, 2005). A demonstration of the ergonomic mindset that had developed among workers and a major test of management's commitment to the IFC occurred in 2001 when the Occupational Health (OH) unit began receiving a number of complaints about wrist and hand pains. An initial survey conducted by the plant's ergonomic division indicated an increase in complaints, from, an average of, two to six a month, and the possibility that the discomfort and pain might be correlated with the use of the industrial workstation trackballs. Following the survey, several meetings were held with manufacturing management and OH. All were sympathetic to the discomfort the workers felt and the EE was given the green signal to launch a full-fledged study of the problem. However, it was stressed in the strongest possible terms that production could neither be interfered with, nor the clean-room environment compromised on. Silicon-wafer fabrication is conducted according to tight schedules and any disruptions would incur expensive penalties. The clean-room environment also imposed constraints upon the nature of the equipment that could be used. It was clear to all that any breach in the environment by the investigating team would also lead to unwelcome expenses. To cope with these issues, it was decided to consult the Department of Industrial Engineering at that nearby Ben-Gurion University. Consultations led to a decision to launch a two-phase project. The initial phase would focus on the industrial workstations and assess if they created a cumulative musculoskeletal physical load. If the indications suggested that the level of wrist discomfort was correlated to intense use of the workstation, a following study was to be performed to validate the pilot findings. 1.1. The workstation and the work task There are nearly 900 industrial workstations on the plant's production floor. Each includes a monitor, keyboard and trackball on its right-hand side (see Fig. 1). The workstation is the main interface between the technicians and technological environment and it is at the work station that the technician spends most of his or her time, operating the production process-flow, supervising the production machinery, monitoring the production quality, managing the inventory levels, etc. The trackball is an input device that is used to insert data through object pointing. At Intel plants worldwide, there has been a clear trend in recent years toward an increasing use of the trackball vs. the keyboard as an input device. The trackball lies at the heart of the work of some 1200 technicians at the plant. Their work routine consists of four 12-hour shifts—the first two being day shifts and the other two, night shifts. The technicians stand at their workstations for at least 9 out of 12 hours of each shift.