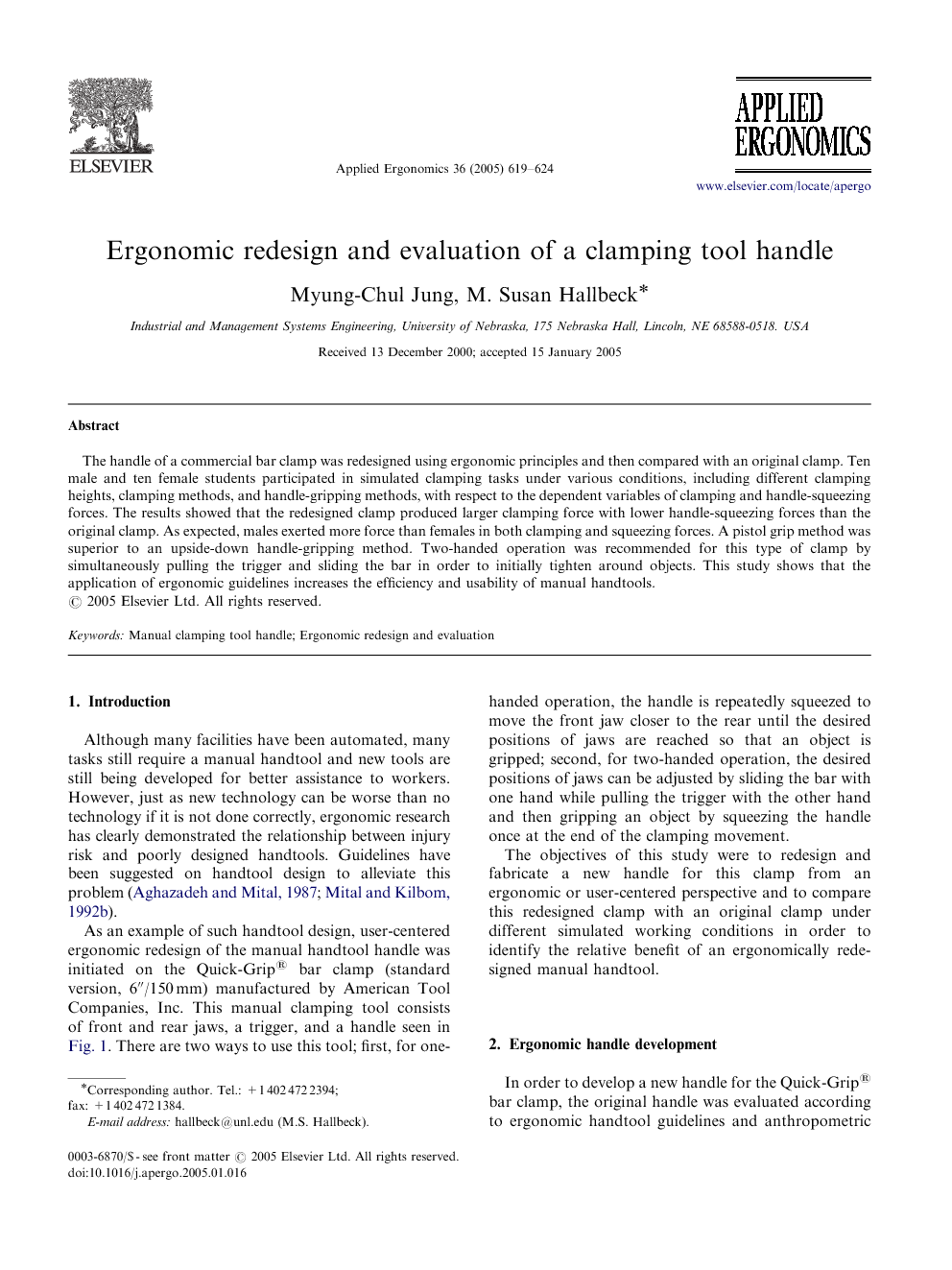 The handle of a commercial bar clamp was redesigned using ergonomic principles and then compared with an original clamp. Ten male and ten female students participated in simulated clamping tasks under various conditions, including different clamping heights, clamping methods, and handle-gripping methods, with respect to the dependent variables of clamping and handle-squeezing forces. The results showed that the redesigned clamp produced larger clamping force with lower handle-squeezing forces than the original clamp. As expected, males exerted more force than females in both clamping and squeezing forces. A pistol grip method was superior to an upside-down handle-gripping method. Two-handed operation was recommended for this type of clamp by simultaneously pulling the trigger and sliding the bar in order to initially tighten around objects. This study shows that the application of ergonomic guidelines increases the efficiency and usability of manual handtools.

Although many facilities have been automated, many tasks still require a manual handtool and new tools are still being developed for better assistance to workers. However, just as new technology can be worse than no technology if it is not done correctly, ergonomic research has clearly demonstrated the relationship between injury risk and poorly designed handtools. Guidelines have been suggested on handtool design to alleviate this problem (Aghazadeh and Mital, 1987; Mital and Kilbom, 1992b). As an example of such handtool design, user-centered ergonomic redesign of the manual handtool handle was initiated on the Quick-Grip® bar clamp (standard version, 6″/150 mm) manufactured by American Tool Companies, Inc. This manual clamping tool consists of front and rear jaws, a trigger, and a handle seen in Fig. 1. There are two ways to use this tool; first, for one-handed operation, the handle is repeatedly squeezed to move the front jaw closer to the rear until the desired positions of jaws are reached so that an object is gripped; second, for two-handed operation, the desired positions of jaws can be adjusted by sliding the bar with one hand while pulling the trigger with the other hand and then gripping an object by squeezing the handle once at the end of the clamping movement.