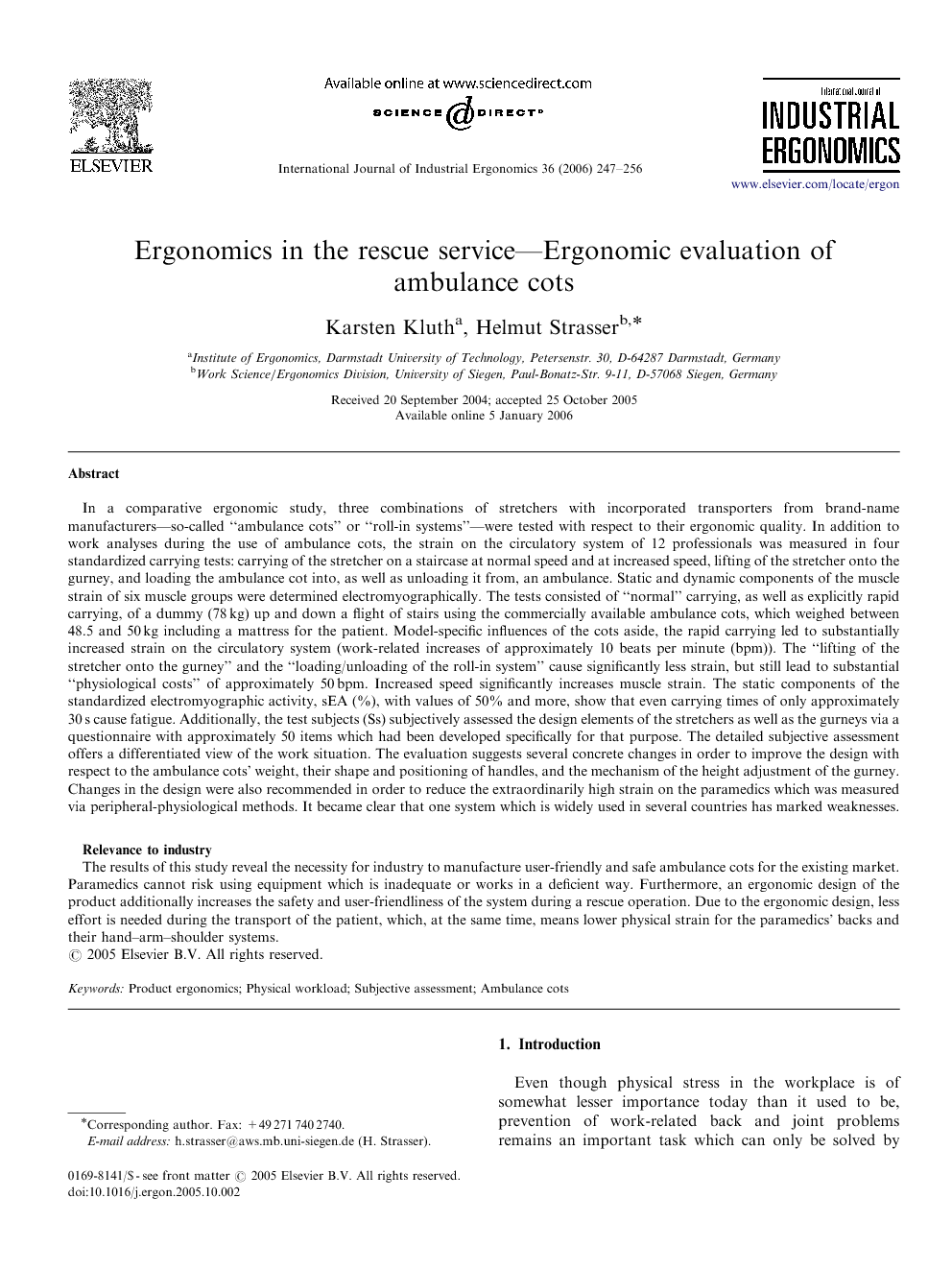 In a comparative ergonomic study, three combinations of stretchers with incorporated transporters from brand-name manufacturers—so-called “ambulance cots” or “roll-in systems”—were tested with respect to their ergonomic quality. In addition to work analyses during the use of ambulance cots, the strain on the circulatory system of 12 professionals was measured in four standardized carrying tests: carrying of the stretcher on a staircase at normal speed and at increased speed, lifting of the stretcher onto the gurney, and loading the ambulance cot into, as well as unloading it from, an ambulance. Static and dynamic components of the muscle strain of six muscle groups were determined electromyographically. The tests consisted of “normal” carrying, as well as explicitly rapid carrying, of a dummy (78 kg) up and down a flight of stairs using the commercially available ambulance cots, which weighed between 48.5 and 50 kg including a mattress for the patient. Model-specific influences of the cots aside, the rapid carrying led to substantially increased strain on the circulatory system (work-related increases of approximately 10 beats per minute (bpm)). The “lifting of the stretcher onto the gurney” and the “loading/unloading of the roll-in system” cause significantly less strain, but still lead to substantial “physiological costs” of approximately 50 bpm. Increased speed significantly increases muscle strain. The static components of the standardized electromyographic activity, sEA (%), with values of 50% and more, show that even carrying times of only approximately 30 s cause fatigue. Additionally, the test subjects (Ss) subjectively assessed the design elements of the stretchers as well as the gurneys via a questionnaire with approximately 50 items which had been developed specifically for that purpose. The detailed subjective assessment offers a differentiated view of the work situation. The evaluation suggests several concrete changes in order to improve the design with respect to the ambulance cots’ weight, their shape and positioning of handles, and the mechanism of the height adjustment of the gurney. Changes in the design were also recommended in order to reduce the extraordinarily high strain on the paramedics which was measured via peripheral-physiological methods. It became clear that one system which is widely used in several countries has marked weaknesses.

Even though physical stress in the workplace is of somewhat lesser importance today than it used to be, prevention of work-related back and joint problems remains an important task which can only be solved by occupational medicine and ergonomics together (cp. Hartmann, 2000). Although the lifting of heavy loads at work is limited and regulated, for example by the Lastenhandhabungsverordnung in Germany (1996)—a special “Ordinance on Safety and Occupational Health during Manual Material Handling—” it is not always possible to impose weight restrictions in the transportation of sick and injured people and for emergency medical services. Such heavy lifting can lead to long-term damage (see, e.g., Ayoub and Mital, 1989), which is currently recognized as an occupational disease. In the course of transporting sick and injured people, paramedics experience the “heavy loads” which are mentioned in “Occupational Disease no. 2108” in our country. This also applies to both male and female paramedics in the civilian as well as the military sectors in other countries (cp. Furber et al., 1997; Knapik et al., 1998 and Knapik et al., 2000; Restorff, 2000; Rice et al., 1996a and Rice et al., 1996b). The latter often operate under extreme time pressure combined with alarmingly bad overall conditions. The weight to be carried (the sum of the weight of stretcher and patient) frequently exceeds 100 kg. Thus, it appears necessary to make use of all possibilities to reduce strain. In order to increase risk prevention, ergonomically optimized stretchers and gurneys should be utilized. Design features of three common commercial ambulance cots (roll-in systems—as combination of stretcher and gurney) as well as their resulting stress and strain were determined in a comparative ergonomic study by objective measurements and subjective assessments in order to document the existing state and derive suggestions for improvements.