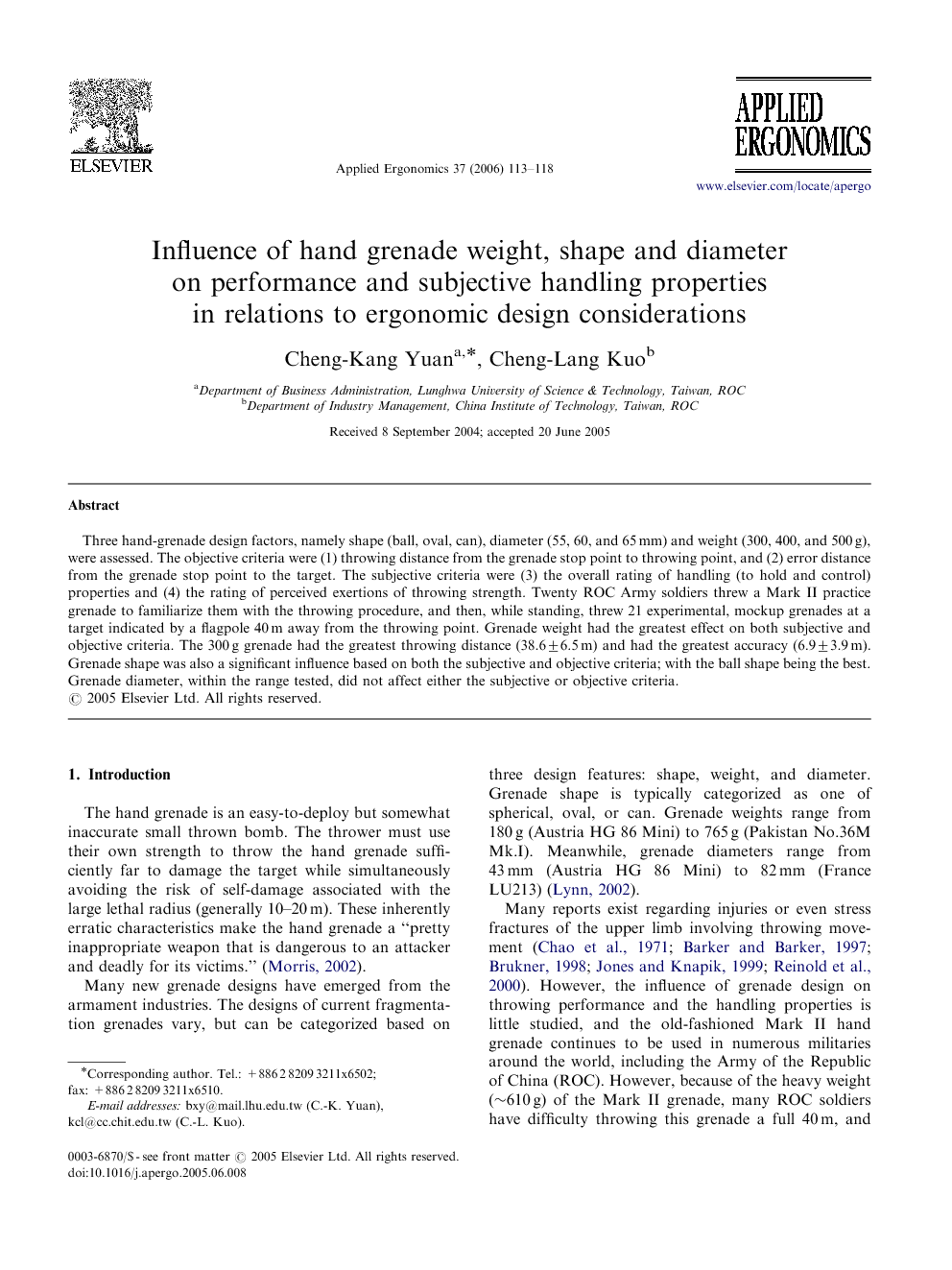 The hand grenade is an easy-to-deploy but somewhat inaccurate small thrown bomb. The thrower must use their own strength to throw the hand grenade sufficiently far to damage the target while simultaneously avoiding the risk of self-damage associated with the large lethal radius (generally 10–20 m). These inherently erratic characteristics make the hand grenade a “pretty inappropriate weapon that is dangerous to an attacker and deadly for its victims.” (Morris, 2002). Many new grenade designs have emerged from the armament industries. The designs of current fragmentation grenades vary, but can be categorized based on three design features: shape, weight, and diameter. Grenade shape is typically categorized as one of spherical, oval, or can. Grenade weights range from 180 g (Austria HG 86 Mini) to 765 g (Pakistan No.36M Mk.I). Meanwhile, grenade diameters range from 43 mm (Austria HG 86 Mini) to 82 mm (France LU213) (Lynn, 2002). Many reports exist regarding injuries or even stress fractures of the upper limb involving throwing movement (Chao et al., 1971; Barker and Barker, 1997; Brukner, 1998; Jones and Knapik, 1999; Reinold et al., 2000). However, the influence of grenade design on throwing performance and the handling properties is little studied, and the old-fashioned Mark II hand grenade continues to be used in numerous militaries around the world, including the Army of the Republic of China (ROC). However, because of the heavy weight (∼610 g) of the Mark II grenade, many ROC soldiers have difficulty throwing this grenade a full 40 m, and some have even suffered serious upper limb stress fractures during throw training (Kao, 1999). Based on the main functional requirements of hand grenades, military training doctrines generally require 30–50 m throwing distance and 1–5 m throwing precision (Kao, 1999). The article of “The theory and practice of hand grenades” (MILTECH, 2002) clearly stated “In general, a well-trained soldier is expected to throw a standard fragmentation grenade to a range of 30 m, with 40 m being close to the limit.” The Millennium's End Rulebook (2005) devised some simple rules for throwing grenades and other lobbed objects, which stating: • An average soldier can throw an M-67 grenade weighing 250 g to a distance of 40 m. • An average soldier can throw a 250 g grenade sized object a distance in meters equal to their strength (not specified what and how to measure). • For every 250 g above the base 250 g, the maximum throwing distance is reduced by 5 m. Clearly, these generalizations regarding grenade throwing distance focus primarily on grenade weight and thrower strength. In addition to throwing distance, throwing precision (accuracy) is also an important but frequently overlooked feature of grenade design. Owing to the rounded shape and thrown delivery of a hand grenade, it will usually not explode upon hitting the ground (except when an impact fuse is used). Instead, the grenade will roll away from the impact point—unless it falls into a confined area like a foxhole, window, or trench. For open ground targets, a throwing precision of 1–5 m is adequate, since the 10–15 m damage radius of general fragmentation hand grenades will exceed the loss of accuracy associated with roll-away. Concerns regarding the design, training doctrine and safety of the Mark II grenade inspired this investigation. This work was sponsored by the National Science Council of ROC to assess the ergonomic issues related to hand grenade designs and to understand the influence of grenade design on handling properties and throwing performance, and determining the appropriate weight range for hand throwing grenades.

This investigation confirmed that grenade designs considerably influence grenade handling properties and throwing performance. Regarding the three design factors tested in this investigation, the weight factor exerted the greatest influence on every variable rated or measured. Shape designs primarily influenced the handling properties. However, the diameter settings tested in this investigation did not appear to affect any of the rated or measured variables. Because all experimental settings were balanced across subjects, negating possible learning or fatigue effects, the differences in subjective ratings and throwing performance between settings are based on ergonomic differences in the experimental settings of grenade mockups. The three weight levels assessed in this investigation demonstrated that the lightest 300 g level was most preferred in terms of handling properties. The lightest 300 g grenades required less throwing exertion, could be thrown the farthest, and had the lowest throwing precision error. All the variables rated or measured in this investigation displayed a consistent tendency, namely that the results improved with reducing grenade weight. The average throwing distance (TD) for 500 g grenades was approximately 35.0 m, and was improved by reduced the grenade weight to 400 g (TD=36.9 m) and 300 g (TD=38.6 m) grenades. If the grenade throwing distance is expected to reach 40 m for an average ROC soldier, then, the grenade weight should be further reduced. These inferences closely match the rules from the Millennium End Rulebook (2005). However, further investigation is required to reduce the grenade weight that was not investigated by this experiment. On the other hand, the subject strength data measured in this investigation was not correlated with throwing distance. This phenomenon probably occurs because the grip force and arm lifting force were not good enough to represent the kinetic model of the grenade throwing task, or because the performance data is confounded by the types of mockup tested in this investigation. The shapes tested in this investigation were only found to influence the rating of handling properties. Ball shaped grenades were rated as having better handling properties than oval shape grenades, while the can shaped grenades had the most negative rating for handling properties. This result is not surprising, because people are naturally familiar with the techniques involved in handling sports-ball type shapes (i.e. balls and ovals). The comparison of miss vs. hit rate of grenade design revealed that even the most preferred and lightest grenades (300 g, ball shape) has approximately 20% chance of missing the target (error distance >10 m), again indicating the inaccurate nature of hand grenades, or possibly the fact that the soldiers recruited in this investigation had poor grenade throwing skills. Nevertheless, reducing grenade weight and ball-shaping the grenade body to improve handling and throwing performances should help improve accuracy. This study attempted to develop a physical model for how throwing distance can be forecast based on the grenade weight, but the correlation of distance with weight (R2=0.03R2=0.03) is insufficient to enable for reliable prediction. The inexplicable model demonstrated that it might not be appropriate to forecast throwing distance based only on the grenade mass and without isolating other factors like thrower skill, trajectory, weather, and so on. Furthermore, the specific focus in this study on a distance of 40 m must also limit the ability of this study to improve understanding of how far the throwers can throw. A further trial involving more realistic grenade mockups, throw by skillful throwers, and with more controllable experimental conditions is planned for the next stage of study.