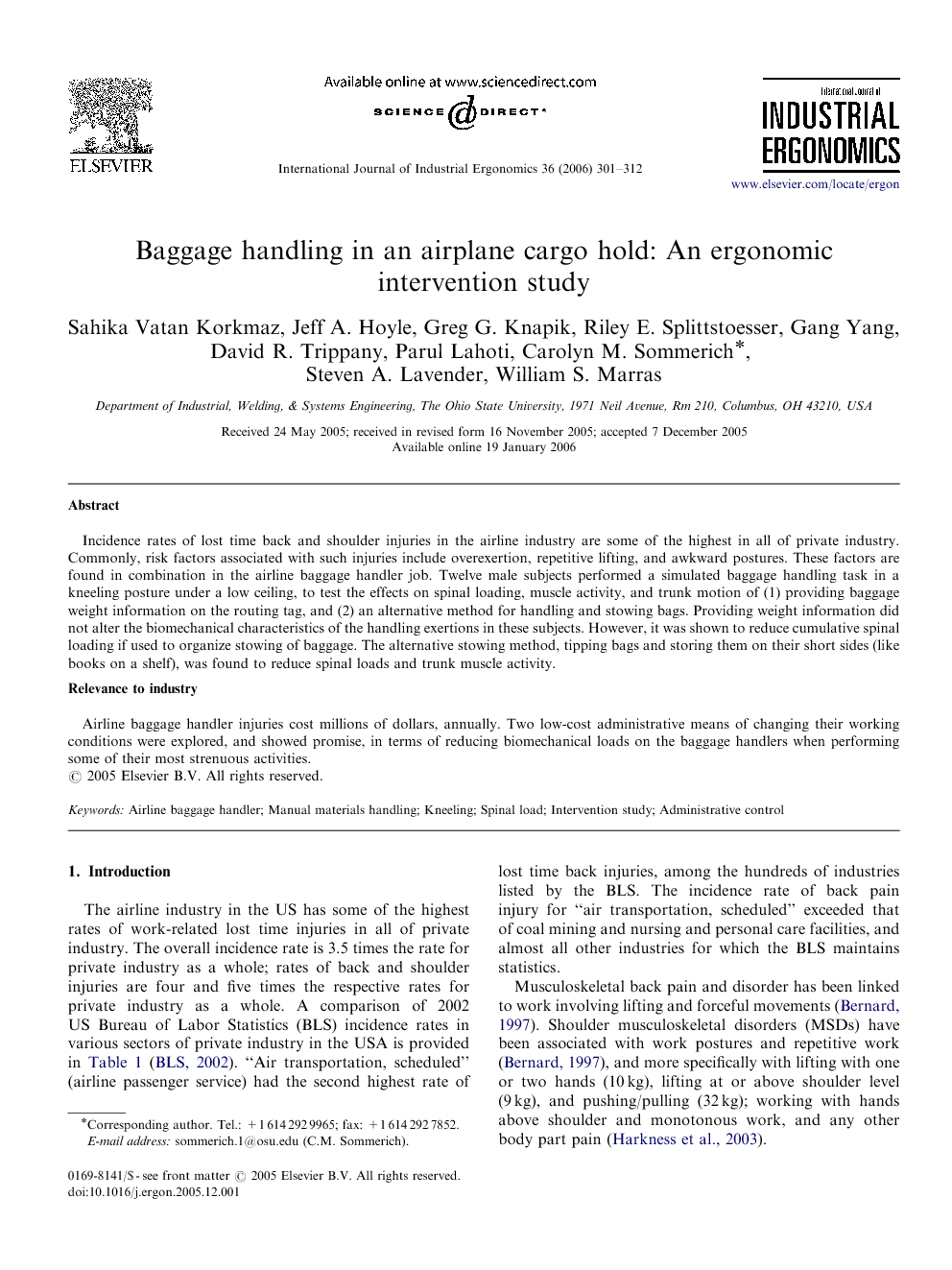 Incidence rates of lost time back and shoulder injuries in the airline industry are some of the highest in all of private industry. Commonly, risk factors associated with such injuries include overexertion, repetitive lifting, and awkward postures. These factors are found in combination in the airline baggage handler job. Twelve male subjects performed a simulated baggage handling task in a kneeling posture under a low ceiling, to test the effects on spinal loading, muscle activity, and trunk motion of (1) providing baggage weight information on the routing tag, and (2) an alternative method for handling and stowing bags. Providing weight information did not alter the biomechanical characteristics of the handling exertions in these subjects. However, it was shown to reduce cumulative spinal loading if used to organize stowing of baggage. The alternative stowing method, tipping bags and storing them on their short sides (like books on a shelf), was found to reduce spinal loads and trunk muscle activity. Relevance to industry Airline baggage handler injuries cost millions of dollars, annually. Two low-cost administrative means of changing their working conditions were explored, and showed promise, in terms of reducing biomechanical loads on the baggage handlers when performing some of their most strenuous activities.

The airline industry in the US has some of the highest rates of work-related lost time injuries in all of private industry. The overall incidence rate is 3.5 times the rate for private industry as a whole; rates of back and shoulder injuries are four and five times the respective rates for private industry as a whole. A comparison of 2002 US Bureau of Labor Statistics (BLS) incidence rates in various sectors of private industry in the USA is provided in Table 1 (BLS, 2002). “Air transportation, scheduled” (airline passenger service) had the second highest rate of lost time back injuries, among the hundreds of industries listed by the BLS. The incidence rate of back pain injury for “air transportation, scheduled” exceeded that of coal mining and nursing and personal care facilities, and almost all other industries for which the BLS maintains statistics.

Musculoskeletal back pain and disorder has been linked to work involving lifting and forceful movements (Bernard, 1997). Shoulder musculoskeletal disorders (MSDs) have been associated with work postures and repetitive work (Bernard, 1997), and more specifically with lifting with one or two hands (10 kg), lifting at or above shoulder level (9 kg), and pushing/pulling (32 kg); working with hands above shoulder and monotonous work, and any other body part pain (Harkness et al., 2003). One airline industry job that requires repetitive manual handling of heavy materials is that of airline baggage handler. Dell's surveys of airline safety professionals and baggage handlers revealed that one in 12 baggage handlers suffers a back injury each year (Dell, 1998 and de Looze et al., 2001). On average, in the time period 1992–1994, baggage handler back injuries cost each of the surveyed companies $1.25 million annually. Both sampled groups identified working inside narrow-body aircraft as the top work location likely to cause back injuries. The top two tasks identified by both groups as most likely to cause injury were “pushing baggage from the doorway into the baggage compartment of narrow body aircraft” and “stacking baggage inside the baggage compartment of narrow body aircraft”. Narrow-body aircraft include airplanes such as the Boeing B737 and Fokker F100. Ceiling height for the Boeing 737 cargo hold is 112 cm, which forces baggage handlers to work in squat, stooped, kneeling, or seated postures and often handle luggage at or above shoulder level. On average, a piece of luggage weighs 15 kg (de Looze et al., 2001); however, baggage handlers are typically required to handle bags weighing more than 32 kg (the notional industry weight limit) (Dell, 1997). This load exceeds the National Institute for Occupational Safety and Health (NIOSH) lifting equation limit for working in optimum working postures and conditions (Waters et al., 1993). Stålhammara et al. (1986) performed a laboratory simulation of baggage handling in a DC-9 (100 cm ceiling height) to study effects of different working postures. Participants were professional aircraft loaders. Bags weighed 9–19 kg. Based on their biomechanical assessment, no one posture was better or worse across all of their measures. There was somewhat of a tradeoff between muscle activities, in that postures with higher erector spinae activity tended to have somewhat lower trapezius activity and vice versa. Additionally, luggage-handling times were significantly shorter (by 10%) when kneeling than when sitting or squatting. When adverse work conditions exist, engineering and/or administrative means of changing the conditions should be explored. One engineering solution that is being used in over 2500 narrow-body aircraft at this point is the Sliding Carpet System (Telair). The system still requires manual handling and stacking of baggage, but it eliminates much of the manual movement of baggage along the length of the plane. Johansen (1995), cited in Dell (1997), reported reductions in sick rates, damage to luggage and luggage compartment lining, and numbers of baggage handlers required to load a plane, as well as $2 million in savings in the first 3 years of operation of 17 B737s with the systems. The baggage handlers surveyed by Dell were also favorably inclined toward “in-plane” baggage systems (Dell, 1998). The baggage handlers also identified a number of administrative solutions that might be useful. At the top of the list was adding warning tags to heavy bags and improving baggage handling training. Dell (1997) also examined the option of enforcing the weight limit, but unless this was adopted by all countries and airlines simultaneously, those that adopted the rule would be at a commercial disadvantage. Currently, luggage is not routinely weighed, so bags exceeding 32 kg are only tagged if they are spotted by check-in personnel. Lighter bags may also be problematic if their weight is disproportional to their size. A study by Butler et al. (1993) showed spinal moments are elevated for unexpectedly small loads. The purpose of the current study was to evaluate two administrative interventions for their capacity to reduce some of the risk factors to which baggage handlers are exposed. The interventions were based on consideration of worker biomechanics and acceptance, as well as cost to employers. Both interventions could be used in conjunction with a Sliding Carpet System. The first intervention is the addition of weight information on the existing routing tag of all luggages. This would ensure that all heavy bags are so identified, and would help workers to avoid unexpected loading situations when a bag weighs more or less than anticipated. The second intervention is an alternative to the current methods of stowing bags. Some carriers now lay bags flat and stack them into several layers, from floor to ceiling of the cargo hold, while others place bags on their long sides in fewer layers. The proposed alternative stowing method requires bags to be stored upright on their short sides, in order to further reduce the number of layers (and consequently the number of lifts a baggage handler must perform). This strategy could be implemented with minimal training required for the workers, and at minimal cost to airlines. Fig. 1 shows both stowing methods. A key element of the new storage method is that most bags are slid into place and then tipped upright, as opposed to being lifted into place. These interventions are intended to reduce the forces exerted by the back and shoulder muscles in baggage handling scenarios, and reduce the amount of the spinal loading to which baggage handlers are exposed. The following two hypotheses were tested: 1. Providing categorical information on bag weight will significantly reduce muscle activity and spinal loading, when compared to the current condition of providing no weight information. 2. Tipping bags upright will significantly reduce muscle activity and spinal loading, when compared to stacking horizontal bags.