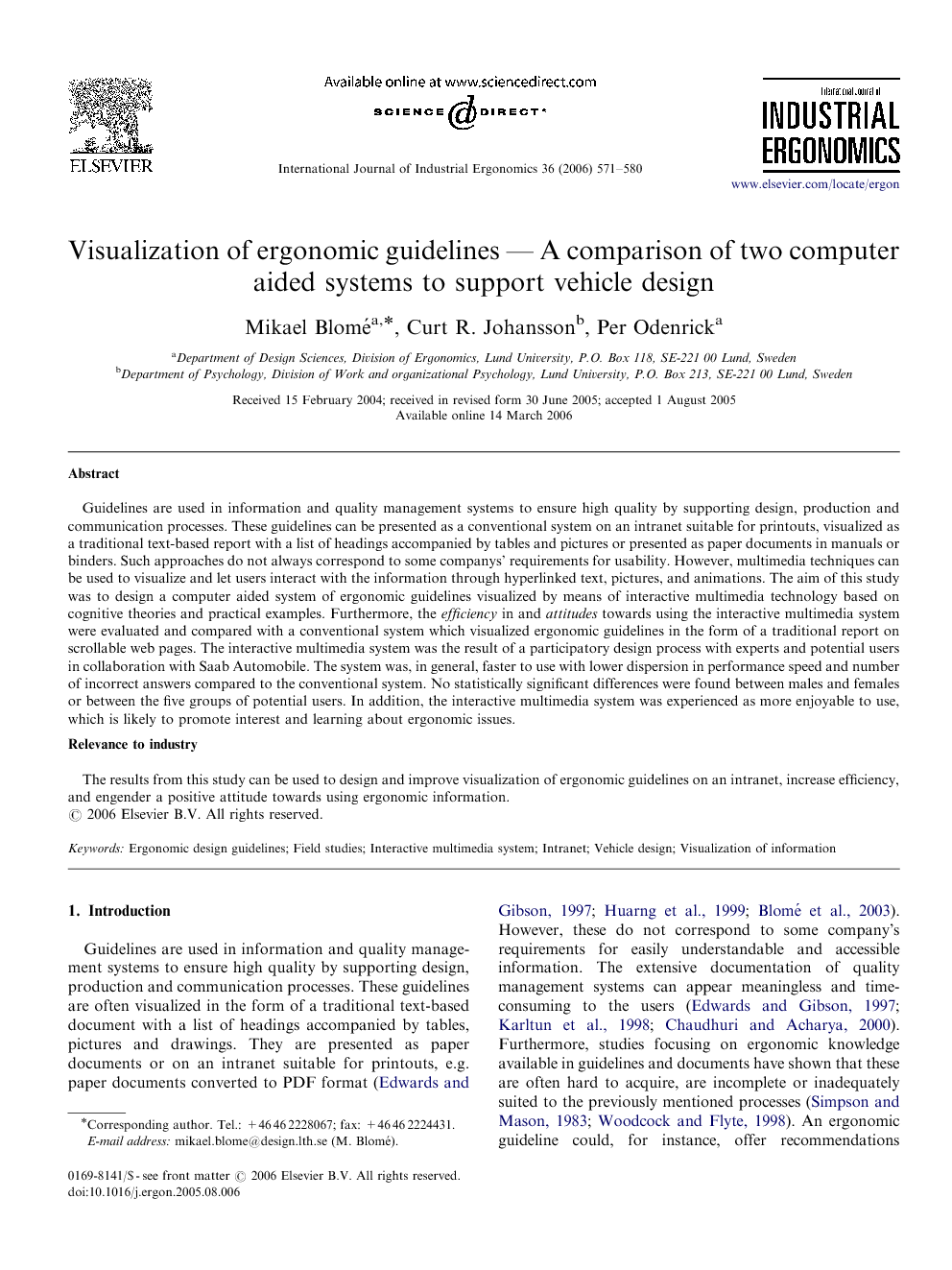 Guidelines are used in information and quality management systems to ensure high quality by supporting design, production and communication processes. These guidelines can be presented as a conventional system on an intranet suitable for printouts, visualized as a traditional text-based report with a list of headings accompanied by tables and pictures or presented as paper documents in manuals or binders. Such approaches do not always correspond to some companys’ requirements for usability. However, multimedia techniques can be used to visualize and let users interact with the information through hyperlinked text, pictures, and animations. The aim of this study was to design a computer aided system of ergonomic guidelines visualized by means of interactive multimedia technology based on cognitive theories and practical examples. Furthermore, the efficiency in and attitudes towards using the interactive multimedia system were evaluated and compared with a conventional system which visualized ergonomic guidelines in the form of a traditional report on scrollable web pages. The interactive multimedia system was the result of a participatory design process with experts and potential users in collaboration with Saab Automobile. The system was, in general, faster to use with lower dispersion in performance speed and number of incorrect answers compared to the conventional system. No statistically significant differences were found between males and females or between the five groups of potential users. In addition, the interactive multimedia system was experienced as more enjoyable to use, which is likely to promote interest and learning about ergonomic issues. Relevance to industry The results from this study can be used to design and improve visualization of ergonomic guidelines on an intranet, increase efficiency, and engender a positive attitude towards using ergonomic information.

Summing up the discussion with respect to the purpose of this paper, it can be concluded that: • A system of ergonomic guidelines based on interactive drawings, pictures, and animations supported by text is generally faster and more enjoyable to use than a conventional system based on text supported by drawings. • It is preferable to visualize ergonomic guidelines with pictures of different views of a car with groups of guidelines and specific guidelines connected to hyperlinked zones. Furthermore, a specific ergonomic guideline should focus on drawings where dimensions and body parts are integrated with physical details showing dimensional relations and how the details are to be used. An animation makes it easier to understand the use of details and dimensional relations and also makes the presentations more enjoyable to use. • It is a successful approach to visualize an interactive multimedia system of ergonomic guidelines based on findings in web design and educational multimedia with a participative design process. By visualizing ergonomic guidelines according to the principles presented in this case study, users with different backgrounds will probably find the information more interesting, easy to locate and interpret than a traditional visualization of ergonomic guidelines with a list of headings and text-based documents in a report form. An interesting question for future research is to explore how a system of guidelines according to recommended principles should be maintained to continuously develop and document knowledge of ergonomic issues.