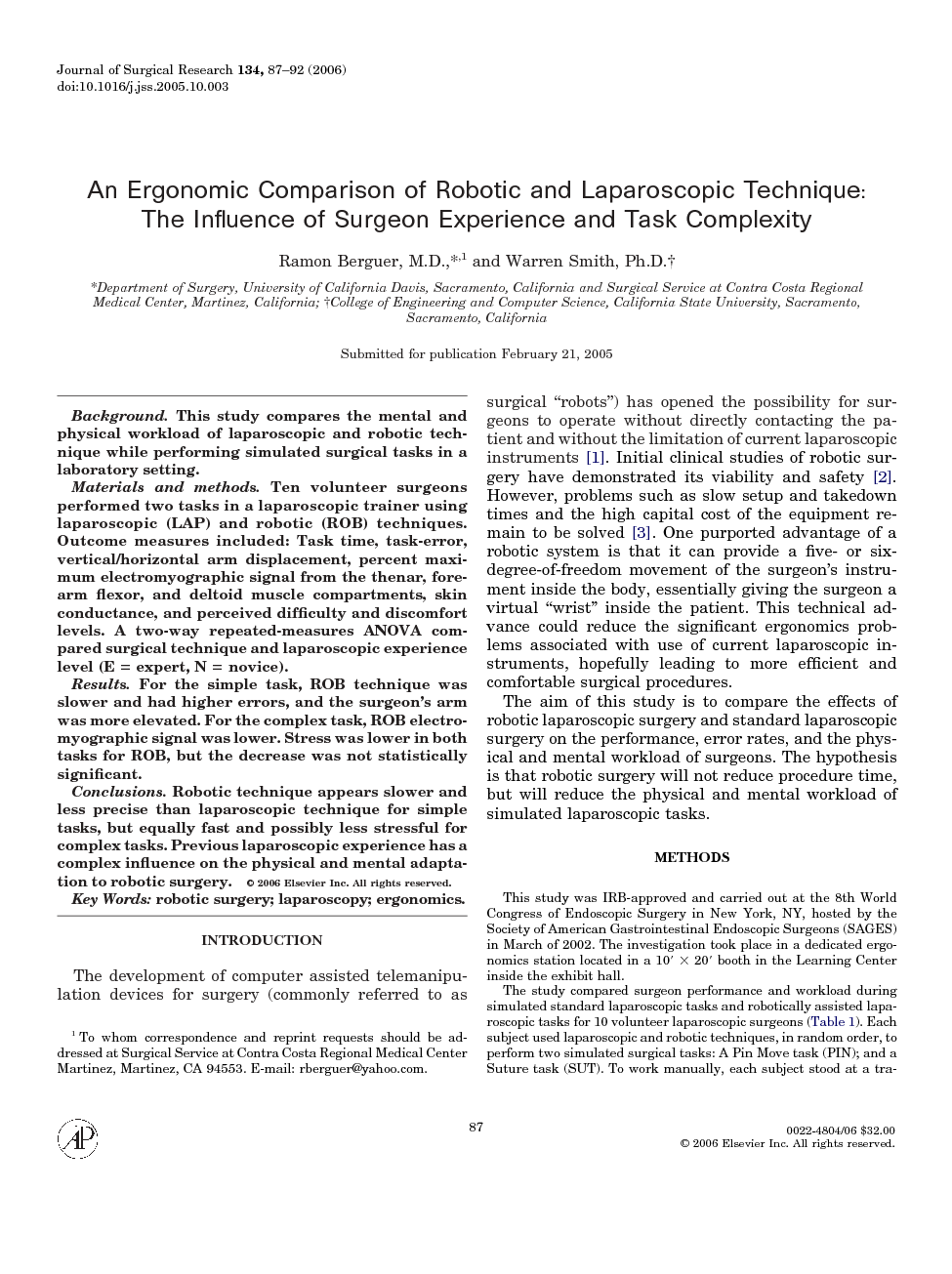 The development of computer assisted telemanipulation devices for surgery (commonly referred to as surgical “robots”) has opened the possibility for surgeons to operate without directly contacting the patient and without the limitation of current laparoscopic instruments [1]. Initial clinical studies of robotic surgery have demonstrated its viability and safety [2]. However, problems such as slow setup and takedown times and the high capital cost of the equipment remain to be solved [3]. One purported advantage of a robotic system is that it can provide a five- or six-degree-of-freedom movement of the surgeon’s instrument inside the body, essentially giving the surgeon a virtual “wrist” inside the patient. This technical advance could reduce the significant ergonomics problems associated with use of current laparoscopic instruments, hopefully leading to more efficient and comfortable surgical procedures. The aim of this study is to compare the effects of robotic laparoscopic surgery and standard laparoscopic surgery on the performance, error rates, and the physical and mental workload of surgeons. The hypothesis is that robotic surgery will not reduce procedure time, but will reduce the physical and mental workload of simulated laparoscopic tasks.

Robotic technique appears slower and less precise than laparoscopic technique for simple tasks, but equally fast and possibly less stressful for complex tasks. Previous laparoscopic experience has a complex influence on the physical and mental adaptation to robotic surgery.The clinical use of computer-enhanced (“robotic”) surgery has evolved rapidly from its early descriptions [6] to its present use in various surgical fields. The potential advantages of robotic surgery include 1) providing a stable camera platform, 2) replacing two-dimensional with three-dimensional imaging, 3) simulating the fluid motions of a surgeon’s wrist to overcome the motion limitations of straight laparoscopic instruments, and 4) offering the surgeon a comfortable, ergonomically optimal operating position [7 and 8]. Comparative studies of robotic versus laparoscopic technique have generally shown robotic systems to be slower to perform basic simulated surgical tasks [ 8, 9, 10 and 11], yet equally fast or faster in performing more complex tasks such as suturing and knot-tying [ 8, 11, 12 and 13]. Animal studies have demonstrated the superiority of robotic technique for precision tasks such as aortic replacement [ 12 and 14] and pig coronary artery anastomoses [15]. A number of clinical studies have shown robotic systems to be safe and capable, but hampered by slower setup and turnover times [ 10, 16 and 17]. One limiting factor that the above-referenced studies have in common is the exclusive use of performance times and errors as study endpoints. The purpose of the present study was to investigate surgeons’ physical and mental workload using robotic laparoscopic systems in addition to their performance. Our results are consistent with the published literature in demonstrating longer robotic task times for a simple task yet no difference in performance for a complex task compared to laparoscopic technique. In our study, the Zeus robotic system suffered from increased control errors (dropping the pin before placing it inside marked circle) compared to laparoscopic instruments. This may have been caused by the robotic inexperience of the subjects, the effect of the lack of force-feedback for this delicate maneuver, and by the 5-DOF Zeus manipulator. For example, Ruurda [12] reported increased suture breaks in sutured pig bowel anastomoses with the DaVinci robotic system (Intuitive Surgical, Sunnyvale, CA) that also lacks force-feedback. It should be noted that while the pin move in our study is challenging, it does not depict a realistic surgical task. In regards to physical workload, we measured a significantly higher arm abduction angle while performing the PIN task with the Zeus system compared to laparoscopic technique, despite the seated position of the subjects at the robotic console. Because this finding was not accompanied by higher Deltoid muscle activation, we reviewed the video tapes of the procedures and conclude that it resulted from the placement of surgeons’ arms on the padded armrest of the Zeuz system. Because the arm rests and seat are adjustable and provide support to the arm, this condition should not present a problem during clinical use. Our study found that use of the Zeus system for suturing and knot-tying required less activation of the Thenar muscle compartment (thumb) compared to laparoscopic technique. This finding has not been reported before and suggests that the enhancement of the surgeons’ grasp through the robotic system might eliminate the frequently reported thumb fatigue experienced during the use of laparoscopic instruments [18 and 19]. This decrease in thumb workload with the robotic system was significant despite the fact that the axial laparoscopic needle driver incorporated a ratchet mechanism designed to reduce thumb fatigue during suturing. We also found a trend toward less Forearm flexor activation with the Zeus system compared to laparoscopic technique, but the results were not statistically significant. It is notable that the subjects demonstrated a decrease in average skin conductance values with the use of the robotic system versus standard laparoscopy that was almost statistically significant. We have previously shown that laparoscopic surgery results in higher mental stress than open surgery [20] using similar measurements. Our present data suggest that robotic technique might be less mentally stressful than laparoscopic surgery- a welcome reversal of a concerning trend. The lack of clear statistical significance of this finding in the present study may be a result of the small sample size, the short duration of the tasks, and the relative inexperience with robotic technique of most subjects. In summary, we conclude that use of robotic technique results in equal performance as laparoscopic surgery for complex tasks, decreased thumb muscle forces, and possibly decrease mental stress compared to standard laparoscopic technique. Further studies of surgeons’ workload during robotic surgery are needed to confirm and elaborate these findings.