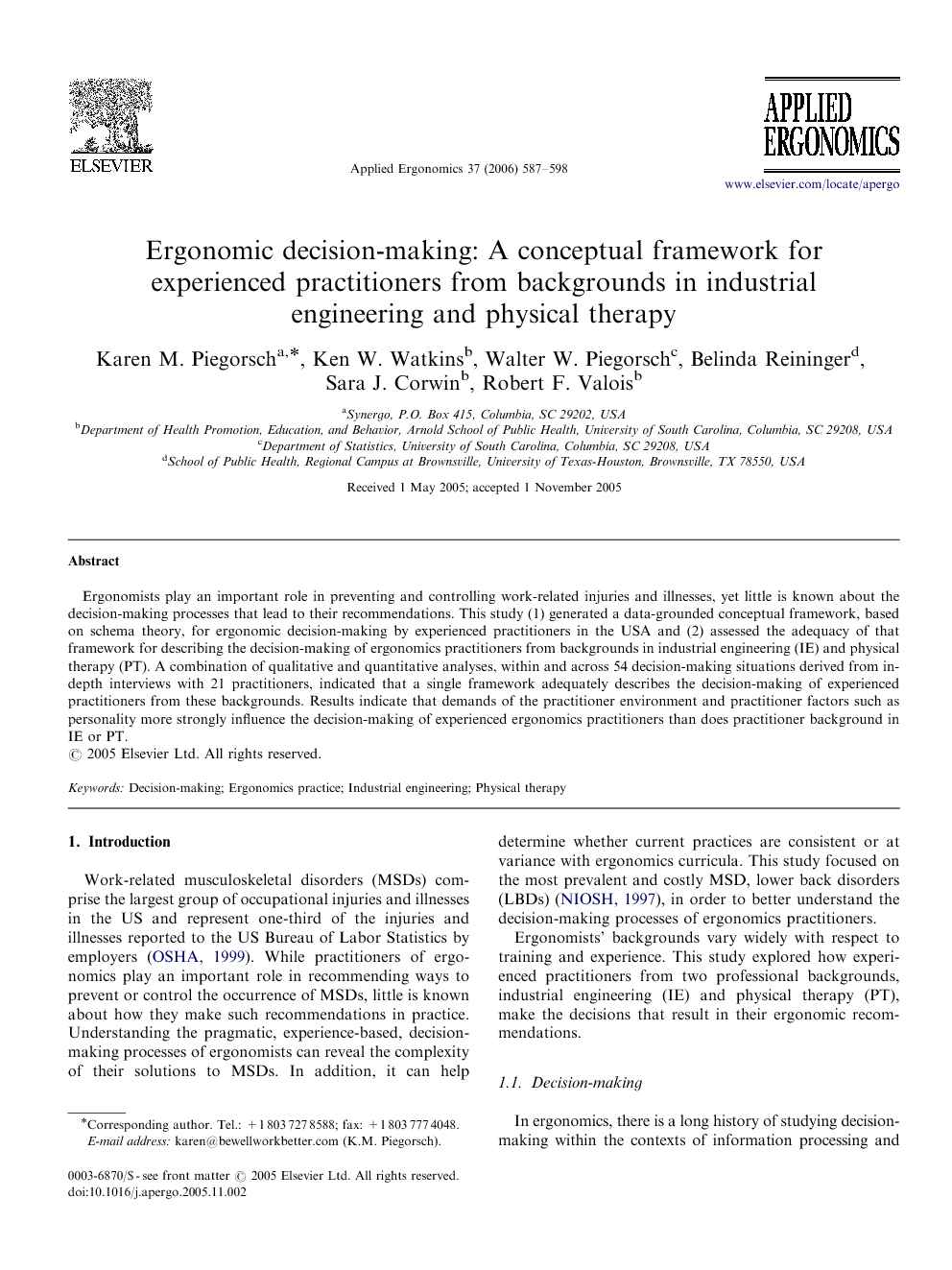 Work-related musculoskeletal disorders (MSDs) comprise the largest group of occupational injuries and illnesses in the US and represent one-third of the injuries and illnesses reported to the US Bureau of Labor Statistics by employers (OSHA, 1999). While practitioners of ergonomics play an important role in recommending ways to prevent or control the occurrence of MSDs, little is known about how they make such recommendations in practice. Understanding the pragmatic, experience-based, decision-making processes of ergonomists can reveal the complexity of their solutions to MSDs. In addition, it can help determine whether current practices are consistent or at variance with ergonomics curricula. This study focused on the most prevalent and costly MSD, lower back disorders (LBDs) (NIOSH, 1997), in order to better understand the decision-making processes of ergonomics practitioners. Ergonomists’ backgrounds vary widely with respect to training and experience. This study explored how experienced practitioners from two professional backgrounds, industrial engineering (IE) and physical therapy (PT), make the decisions that result in their ergonomic recommendations. 1.1. Decision-making In ergonomics, there is a long history of studying decision-making within the contexts of information processing and problem-solving (Lehto, 1997). However, this literature includes few studies on how ergonomists themselves make decisions that result in their recommendations. A seminal study by Whysall et al. (2004) emphasizes the ergonomics consultancy process, highlighting the effectiveness with which recommendations are implemented. By applying qualitative methodology to the problem of preventing MSDs, they open up a new strategy for studying ergonomic decision-making in this area. However, decision-making research has focused primarily on models for choosing among decision alternatives (Lehto, 1997), and a need remains for studies that can illuminate the process by which alternatives are generated (Klein, 1993). The decision-making literature often separates into two main approaches: classical/traditional, in which the emphasis is on descriptive and prescriptive models (Orasanu and Connolly, 1993), and naturalistic, through which there has been an increasing emphasis over the past three decades on performance in real-world settings (Lipshitz, 1993). Studies on naturalistic decision-making suggest that the experience of the practitioner is an important factor (Connolly and Wagner, 1988; Zsambok, 1997), particularly in determining the decision-making strategy and schemata that a decision-maker brings to bear on a situation (Beach and Mitchell, 1987; Fiske and Taylor, 1984). 1.2. Schema theory This investigation was guided by the principles of schema theory, which states that people unconsciously organize and store information from previous experiences in an abstract form—called a “schema”—and later use their schemata to interpret and decide how to respond to input from new situations (Fiske and Linville, 1980). According to this theory, schemata enable the decision-maker to efficiently categorize a situation as a whole pattern (Federico, 1995). The activation of a generic schema is an automatic process that occurs as a person is exposed to a new situation (Rumelhart, 1984). Interaction with the situation leads to creation of an “instantiated schema” (i.e., a concrete, conscious pattern of concepts specific to the current situation) (Brewer and Nakamura, 1984). Researchers in the field of naturalistic decision-making generally conclude that real-world decision-making is strongly schema-driven (Klein, 1993; Marshall, 1995; Smith and Marshall, 1997). When members of a cultural group share experiences they form similar schemata, which in turn lead to similarities in their responses to future inputs (Strauss and Quinn, 1997). Conversely, people from different cultures may form contrasting perspectives that lead to differences in their schemata and responses to similar situations (Bostrom et al., 1994; Svenson, 1999). The different professional–cultural backgrounds (e.g., PT and IE) of ergonomists provide different sets of experiences which influence schemata for addressing workplace MSDs. These different schemata may, in turn, effect differences in practitioners’ decision-making processes. 1.3. Specific aims Our specific aims were to: (1) identify decision-making processes through which ergonomists arrive at recommendations for preventing and controlling LBDs in the workplace, and the conditions under which they carry out those processes; (2) identify elements of schemata that guide practitioners’ decision-making in this domain; (3) develop a conceptual framework for how schemata influence this decision-making; and (4) determine if a single conceptual framework adequately describes decision-making regardless of practitioner background in IE or PT.