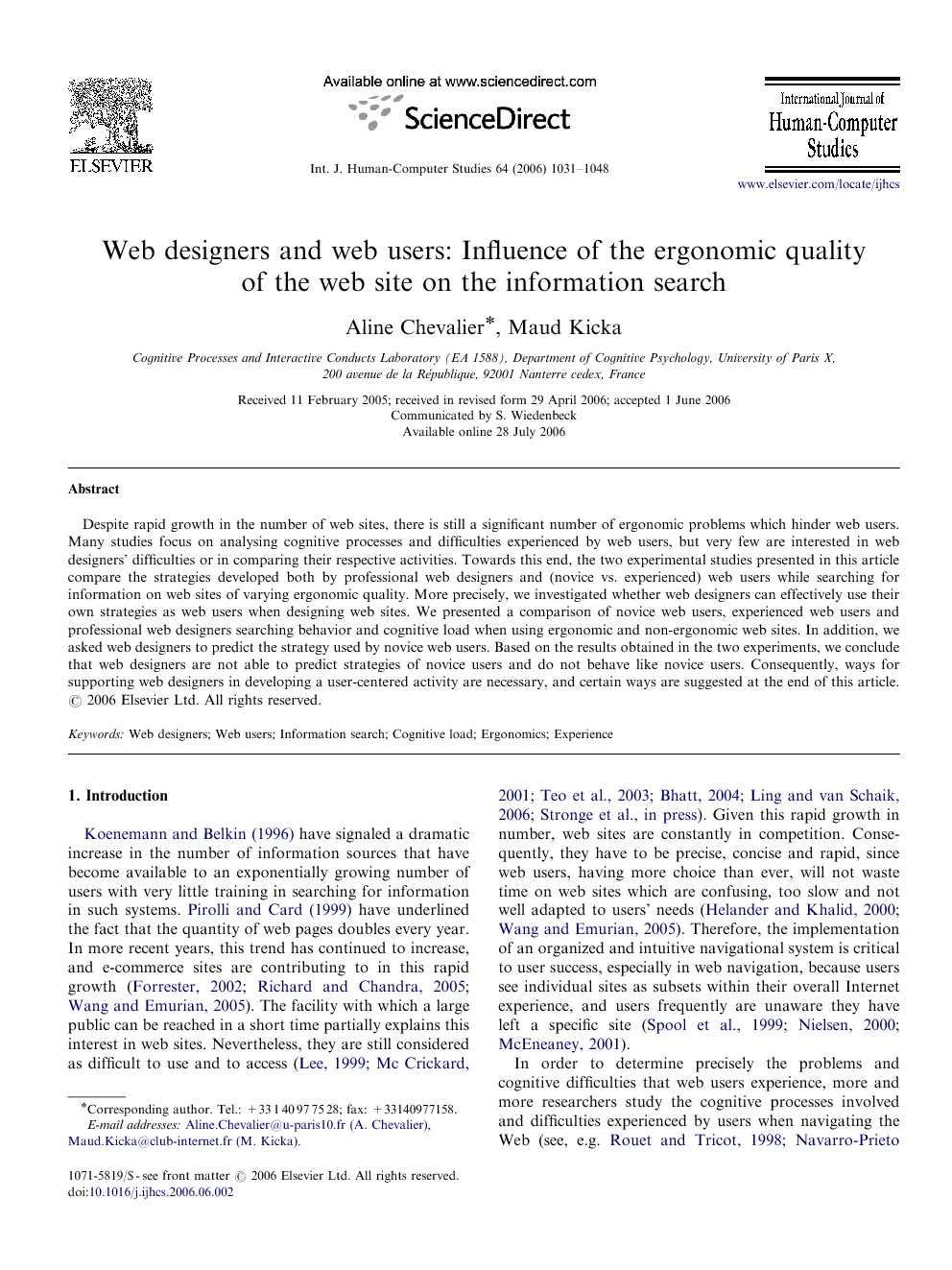 Despite rapid growth in the number of web sites, there is still a significant number of ergonomic problems which hinder web users. Many studies focus on analysing cognitive processes and difficulties experienced by web users, but very few are interested in web designers’ difficulties or in comparing their respective activities. Towards this end, the two experimental studies presented in this article compare the strategies developed both by professional web designers and (novice vs. experienced) web users while searching for information on web sites of varying ergonomic quality. More precisely, we investigated whether web designers can effectively use their own strategies as web users when designing web sites. We presented a comparison of novice web users, experienced web users and professional web designers searching behavior and cognitive load when using ergonomic and non-ergonomic web sites. In addition, we asked web designers to predict the strategy used by novice web users. Based on the results obtained in the two experiments, we conclude that web designers are not able to predict strategies of novice users and do not behave like novice users. Consequently, ways for supporting web designers in developing a user-centered activity are necessary, and certain ways are suggested at the end of this article.

Koenemann and Belkin (1996) have signaled a dramatic increase in the number of information sources that have become available to an exponentially growing number of users with very little training in searching for information in such systems. Pirolli and Card (1999) have underlined the fact that the quantity of web pages doubles every year. In more recent years, this trend has continued to increase, and e-commerce sites are contributing to in this rapid growth (Forrester, 2002; Richard and Chandra, 2005; Wang and Emurian, 2005). The facility with which a large public can be reached in a short time partially explains this interest in web sites. Nevertheless, they are still considered as difficult to use and to access (Lee, 1999; Mc Crickard, 2001; Teo et al., 2003; Bhatt, 2004; Ling and van Schaik, 2006; Stronge et al., in press). Given this rapid growth in number, web sites are constantly in competition. Consequently, they have to be precise, concise and rapid, since web users, having more choice than ever, will not waste time on web sites which are confusing, too slow and not well adapted to users’ needs (Helander and Khalid, 2000; Wang and Emurian, 2005). Therefore, the implementation of an organized and intuitive navigational system is critical to user success, especially in web navigation, because users see individual sites as subsets within their overall Internet experience, and users frequently are unaware they have left a specific site (Spool et al., 1999; Nielsen, 2000; McEneaney, 2001). In order to determine precisely the problems and cognitive difficulties that web users experience, more and more researchers study the cognitive processes involved and difficulties experienced by users when navigating the Web (see, e.g. Rouet and Tricot, 1998; Navarro-Prieto et al., 1999; Pearson and van Schaik, 2003; Rouet, 2003; Pratt et al., 2004). Findings about users’ cognitive functioning have ergonomic implications for designers (see, e.g., Hong et al., 2004; Oulasvirta, 2004) and for the creation of guidelines and checklists (see, e.g., Bastien et al., 1999; Spool et al., 1999; van Duyne et al., 2002; Ozok and Salvendy, 2004). Nevertheless, we also assert that understanding designers’ activities and identifying the difficulties that designers experience are essential to improving the ergonomic quality of web sites. More precisely, research on users’ and designers’ cognitive activities must be conducted jointly to help designers concretely and efficiently consider future users’ needs when designing web sites. In this paper, we assert that determining differences between designers and users while navigating will clarify the reasons why designers cannot sufficiently take into account users’ needs when creating web sites. The question of designers’ and users’ differences have been largely ignored, except one recent article by Park et al. (2004) has examined users’ esthetical preferences. In order to address the research needs in this area, we present in this article two experiments conducted with novice web users, experienced web users and professional web designers involved in information search tasks. These experiments aim to compare the search strategies and cognitive resources that (novice vs. experienced) users and professional designers employ while searching for information according to the ergonomic quality of the site (a site with ergonomic problems vs. a site incorporating ergonomic recommendations). The following section provides an overview of information search activity and cognitive load. 3 and 4 present the two experimental studies. The results obtained are discussed in Section 5. Suggestions to help web designers’ activities are presented in Section 6.