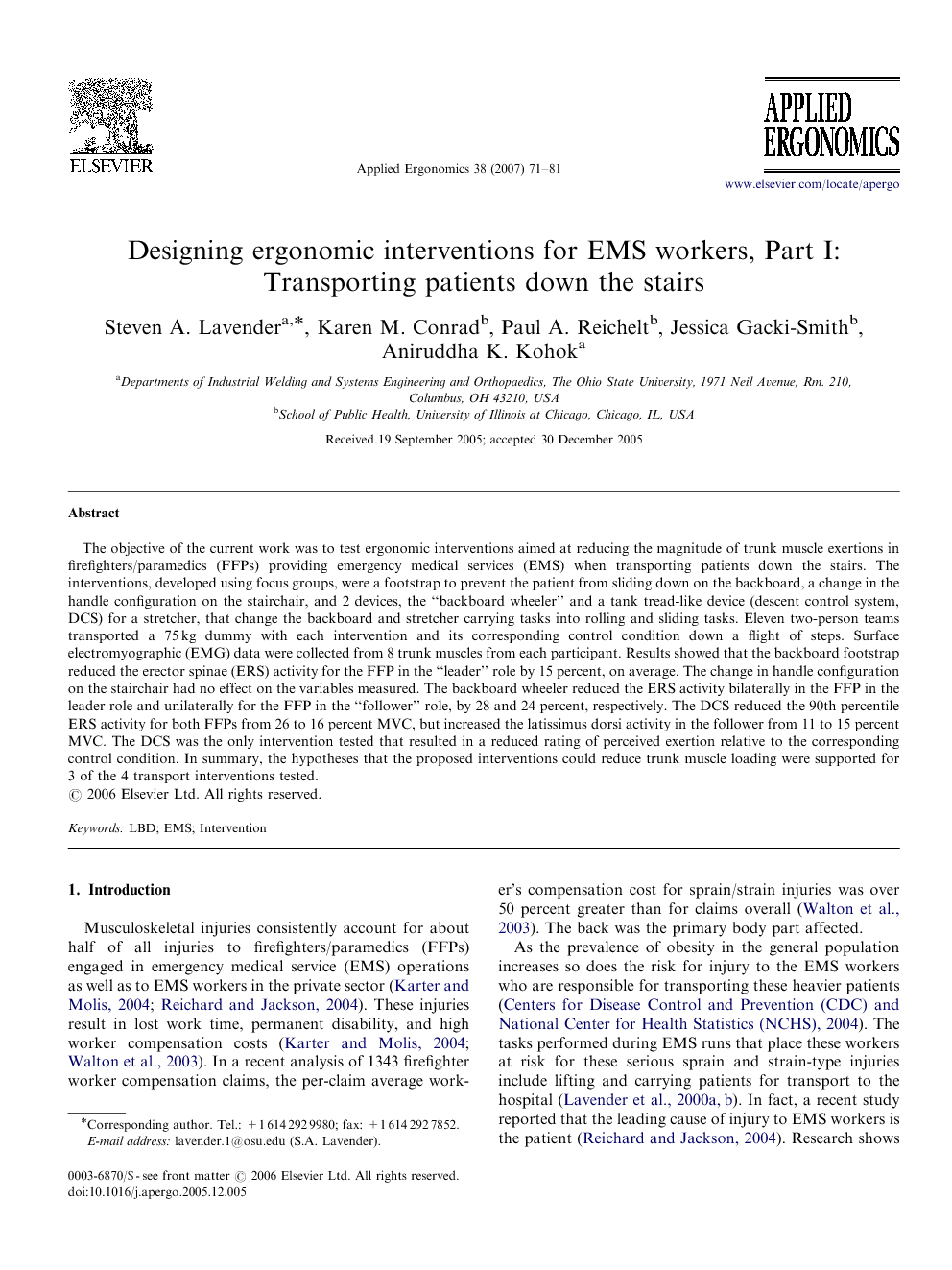 The objective of the current work was to test ergonomic interventions aimed at reducing the magnitude of trunk muscle exertions in firefighters/paramedics (FFPs) providing emergency medical services (EMS) when transporting patients down the stairs. The interventions, developed using focus groups, were a footstrap to prevent the patient from sliding down on the backboard, a change in the handle configuration on the stairchair, and 2 devices, the “backboard wheeler” and a tank tread-like device (descent control system, DCS) for a stretcher, that change the backboard and stretcher carrying tasks into rolling and sliding tasks. Eleven two-person teams transported a 75 kg dummy with each intervention and its corresponding control condition down a flight of steps. Surface electromyographic (EMG) data were collected from 8 trunk muscles from each participant. Results showed that the backboard footstrap reduced the erector spinae (ERS) activity for the FFP in the “leader” role by 15 percent, on average. The change in handle configuration on the stairchair had no effect on the variables measured. The backboard wheeler reduced the ERS activity bilaterally in the FFP in the leader role and unilaterally for the FFP in the “follower” role, by 28 and 24 percent, respectively. The DCS reduced the 90th percentile ERS activity for both FFPs from 26 to 16 percent MVC, but increased the latissimus dorsi activity in the follower from 11 to 15 percent MVC. The DCS was the only intervention tested that resulted in a reduced rating of perceived exertion relative to the corresponding control condition. In summary, the hypotheses that the proposed interventions could reduce trunk muscle loading were supported for 3 of the 4 transport interventions tested.

Musculoskeletal injuries consistently account for about half of all injuries to firefighters/paramedics (FFPs) engaged in emergency medical service (EMS) operations as well as to EMS workers in the private sector (Karter and Molis, 2004; Reichard and Jackson, 2004). These injuries result in lost work time, permanent disability, and high worker compensation costs (Karter and Molis, 2004; Walton et al., 2003). In a recent analysis of 1343 firefighter worker compensation claims, the per-claim average worker's compensation cost for sprain/strain injuries was over 50 percent greater than for claims overall (Walton et al., 2003). The back was the primary body part affected. As the prevalence of obesity in the general population increases so does the risk for injury to the EMS workers who are responsible for transporting these heavier patients (Centers for Disease Control and Prevention (CDC) and National Center for Health Statistics (NCHS), 2004). The tasks performed during EMS runs that place these workers at risk for these serious sprain and strain-type injuries include lifting and carrying patients for transport to the hospital (Lavender et al., 2000a and Lavender et al., 2000b). In fact, a recent study reported that the leading cause of injury to EMS workers is the patient (Reichard and Jackson, 2004). Research shows that current methods for transporting patients need improvement in order to better protect the EMS workers from injury (Lavender et al., 2000b). The purpose of this work was to evaluate ergonomic interventions aimed at reducing biomechanical loads on the back as patients are transported down the stairs during EMS operations. Our previous findings, based on interviews and surveys with FFPs, indicated that stair decent tasks are both strenuous and frequently performed (Conrad et al., 2000). This was confirmed in biomechanical studies for both members of the two-person team that routinely perform this task (Lavender et al., 2000a and Lavender et al., 2000b). FFPs participating in our focus groups reported that they frequently transport patients from upstairs bedrooms to street level using a stairchair, a backboard, or a stretcher. The selection of the specific piece of equipment is based upon the health status of the patient, space constraints, equipment weight, and individual preferences. Stairchairs, for example, are frequently used where there are tight corners, although relative to a backboard or the stretcher, require an additional transfer prior to being placed in the ambulance. Backboards are used for individuals who cannot be transported in a seated posture, and while they can be placed directly on the stretcher in the ambulance, may be difficult to maneuver through a 90° or 180° turn on a staircase. The same limitation applies to transporting patients directly on a stretcher; however, there is also the increased weight of the stretcher to consider which often exceeds 36 kg. Several ergonomic interventions were developed through a series of focus group discussions with FFPs. Three groups, each with between 8 and 10 FFPs met twice to brainstorm and refine intervention ideas. An industrial designer sketched drawings of the concepts suggested by the participants. During these discussions, the ergonomic challenges of using existing equipment were discussed and potential solutions to the ergonomic problems were identified. These included modifications to existing equipment and the development of new approaches. This paper describes a series of interventions aimed at reducing the trunk muscle exertions during stair-transport tasks. Each of the interventions focused on assisting a two-person team. Within each team we identified 2 roles. The FFP descending the stairs first, usually walking backwards, we refer to as being in the “leader” role. The “follower” role was played by the FFP trailing behind the patient and the transport apparatus. The first intervention was a footstrap that attached to the backboard to prevent the patient from sliding toward the leader. When a patient slides so that his/her feet extend beyond the backboard, the leader ends up holding the backboard further from the body thus increasing the biomechanical load on the leader (Fig. 1a). The second intervention for the stair descent tasks was a device that allowed the backboard to be rolled down the stairs on a handtruck-type device, thereby changing the carrying task into a push and pull task (Fig. 1b). The third intervention was a set of “tank treads” that allow a stretcher to be rolled down the stairs by bridging the steps, thus changing the task from a lift and carrying task to a push and pull task, for the leader and follower, respectively (Fig. 1c). The fourth intervention was a change in the handle configuration of the stairchair (Fig. 1d). Many of the FFPs had indicated in the focus groups that the handles available on their stair chair resulted in their hands being held further from the body to eliminate contact with the patient's head, thus increasing the moment arm between the hand positions and the spine. In each case the hypothesis being tested is that the intervention results in lower electromyographic (EMG) activity than that found with the current equipment. EMG was selected as the primary dependent measure as it provides an objective measure of the exertion magnitude. The aim of the interventions developed through this process was to reduce the magnitude of the exertions required by the major trunk muscles that support, move, and stabilize the spine.

The hypotheses that the proposed interventions could reduce muscle recruitments were supported for 3 of the transport interventions tested. Only the extended handle on the stairchair failed to reduce back muscle recruitment. While the analyses presented in this paper stopped short of computing spine loads, we believe that the reduced muscle exertions, as evidenced by the observed changes in the EMG data, support the use of these interventions in that they have the potential to reduce over-exertion-type injuries. The footstrap is easily implemented with materials most EMS crews have on hand and will add little time to the patient preparation. Preventing the patient from sliding down the board, in addition to helping out the FFP in the leader role will likely make the transfer less uncomfortable for the patient. The DCS and potentially the backboard wheeler, in transforming the carrying task to a push pull task, will likely be the most beneficial approaches to preventing back injuries associated with the transport of patients.