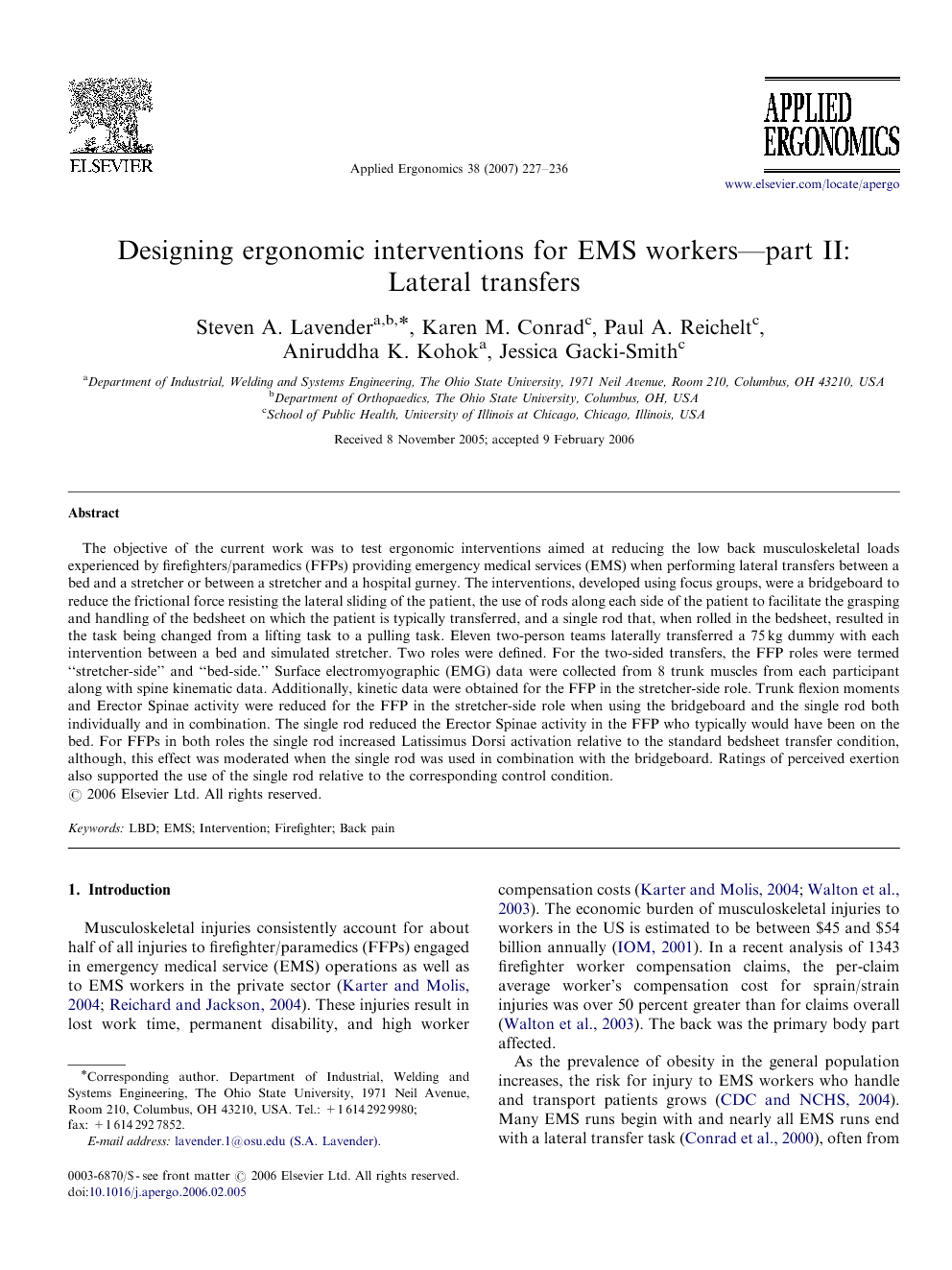 The objective of the current work was to test ergonomic interventions aimed at reducing the low back musculoskeletal loads experienced by firefighters/paramedics (FFPs) providing emergency medical services (EMS) when performing lateral transfers between a bed and a stretcher or between a stretcher and a hospital gurney. The interventions, developed using focus groups, were a bridgeboard to reduce the frictional force resisting the lateral sliding of the patient, the use of rods along each side of the patient to facilitate the grasping and handling of the bedsheet on which the patient is typically transferred, and a single rod that, when rolled in the bedsheet, resulted in the task being changed from a lifting task to a pulling task. Eleven two-person teams laterally transferred a 75 kg dummy with each intervention between a bed and simulated stretcher. Two roles were defined. For the two-sided transfers, the FFP roles were termed “stretcher-side” and “bed-side.” Surface electromyographic (EMG) data were collected from 8 trunk muscles from each participant along with spine kinematic data. Additionally, kinetic data were obtained for the FFP in the stretcher-side role. Trunk flexion moments and Erector Spinae activity were reduced for the FFP in the stretcher-side role when using the bridgeboard and the single rod both individually and in combination. The single rod reduced the Erector Spinae activity in the FFP who typically would have been on the bed. For FFPs in both roles the single rod increased Latissimus Dorsi activation relative to the standard bedsheet transfer condition, although, this effect was moderated when the single rod was used in combination with the bridgeboard. Ratings of perceived exertion also supported the use of the single rod relative to the corresponding control condition.

Musculoskeletal injuries consistently account for about half of all injuries to firefighter/paramedics (FFPs) engaged in emergency medical service (EMS) operations as well as to EMS workers in the private sector (Karter and Molis, 2004; Reichard and Jackson, 2004). These injuries result in lost work time, permanent disability, and high worker compensation costs (Karter and Molis, 2004; Walton et al., 2003). The economic burden of musculoskeletal injuries to workers in the US is estimated to be between $45 and $54 billion annually (IOM, 2001). In a recent analysis of 1343 firefighter worker compensation claims, the per-claim average worker's compensation cost for sprain/strain injuries was over 50 percent greater than for claims overall (Walton et al., 2003). The back was the primary body part affected. As the prevalence of obesity in the general population increases, the risk for injury to EMS workers who handle and transport patients grows (CDC and NCHS, 2004). Many EMS runs begin with and nearly all EMS runs end with a lateral transfer task (Conrad et al., 2000), often from a bed to a stretcher at the patient's home and from the stretcher to the gurney at the hospital. Our previous research studying lateral transfer methods for transporting patients indicated that these are physically demanding tasks that result in large biomechanical loads while in awkward postures (Lavender et al., 2000a and Lavender et al., 2000b). The purpose of this work was to evaluate ergonomic interventions aimed at reducing biomechanical loads on the back as patients are laterally transferred during EMS operations. FFPs frequently laterally transfer supine patients from the bed to a stretcher positioned alongside the bed and or from a stretcher to a hospital gurney. Typically, FFPs perform these lateral transfers, while positioned on each side of the patient, by lifting the patient with the existing bedsheet (Fig. 1a). The ergonomic interventions described in this paper have been developed to facilitate sliding the patient, as opposed to lifting, by making it easier to grasp the sheet or reduce the friction between the bedsheet and the surface below. It should be noted that the proposed interventions, if deemed successful in these evaluations, have the potential to be address the broader population of lateral patient transfer tasks that are performed in more traditional healthcare settings.The specific ergonomic interventions were developed through a series of focus group discussions with FFPs (Conrad et al., in preparation). An industrial designer sketched drawings of the concepts suggested by the participants. During these discussions, the ergonomic challenges of using existing approaches and equipment were discussed and potential interventions were proposed for the ergonomic issues identified. Each of the interventions focused on assisting a two-person team. Within each team we identified two roles. Typically one FFP would kneel or stand on the bed (see Fig. 1). We termed this the “bed-side” role. The other FFP would usually stand in a stooped position on the far side of the stretcher in what we termed the “stretcher-side” role. While both FFPs lift, much of the horizontal movement of the patient is generated by the bedside FFP. The first intervention was a pair of collapsible rods that were designed to facilitate the grasp of the bedsheet (Fig. 1b). By rolling the rods in the bedsheet, the sheet could be grasped such that patient can be wholly lifted from head to toe. The rods had a square cross-section (2.5 cm on a side) to prevent the sheet from slipping. The second intervention was a plastic bridgeboard that was designed to facilitate the sliding of the patient between the bed and the stretcher (Fig. 1c). The intent was that the bridgeboard be placed under the bedsheet adjacent to the patient and would provide a smooth transition between the bed and stretcher. The width of the bridgeboard was equal to the width of the stretcher mattress so that it could be easily transported and stored. The third intervention was a variation of the first intervention in which only one rod was used (Fig. 1d). With this intervention both FFPs worked from the stretcher-side and dragged the patient from the bed to the stretcher. By rolling the bedsheet around the rod, the patient was transported evenly. Most importantly, this third intervention removed the FFP from the bed, which necessitated the task change from a lifting task to a pulling task. For each intervention the hypothesis tested was that the intervention reduced the muscle activity and trunk moments relative to the conventional bedsheet lateral transfer. A secondary research question asked whether it was better for the FFP on the bed to be standing or kneeling?

Relative to the conventional bedsheet transfer, the bridgeboard and single rod interventions were shown to be biomechanically advantageous. The bridgeboard's effect was focused on the FFP located on the stretcher-side of the transfer. The single rod significantly reduced the Erector Spinae recruitment for both FFPs. Combining the single rod with a bridgeboard reduced the increased Latissimus Dorsi activity found with the single rod by itself. FFPs in both roles rated the single rod conditions as the easiest exertions. While the FFPs in the bedside role tended to report lower perceived exertion ratings while standing, the objective data showed that it makes little difference in the muscle recruitment if the FFP who is on the bed stands or kneels. However, there is considerably more trunk flexion associated with the standing posture that could possibly increase the risk to the passive tissues supporting the spine.