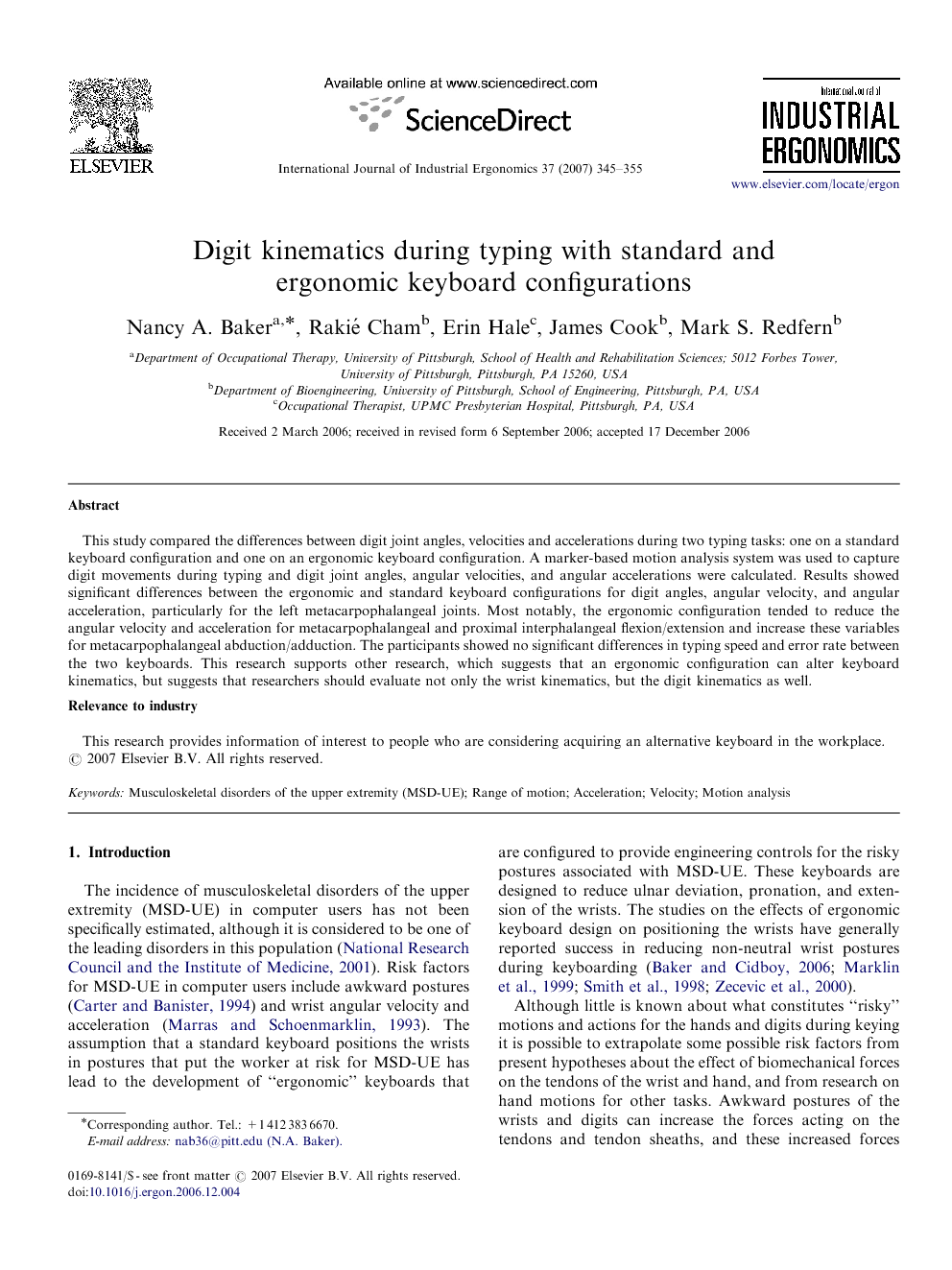 This study compared the differences between digit joint angles, velocities and accelerations during two typing tasks: one on a standard keyboard configuration and one on an ergonomic keyboard configuration. A marker-based motion analysis system was used to capture digit movements during typing and digit joint angles, angular velocities, and angular accelerations were calculated. Results showed significant differences between the ergonomic and standard keyboard configurations for digit angles, angular velocity, and angular acceleration, particularly for the left metacarpophalangeal joints. Most notably, the ergonomic configuration tended to reduce the angular velocity and acceleration for metacarpophalangeal and proximal interphalangeal flexion/extension and increase these variables for metacarpophalangeal abduction/adduction. The participants showed no significant differences in typing speed and error rate between the two keyboards. This research supports other research, which suggests that an ergonomic configuration can alter keyboard kinematics, but suggests that researchers should evaluate not only the wrist kinematics, but the digit kinematics as well. Relevance to Industry This research provides information of interest to people who are considering acquiring an alternative keyboard in the workplace.

The incidence of musculoskeletal disorders of the upper extremity (MSD-UE) in computer users has not been specifically estimated, although it is considered to be one of the leading disorders in this population (National Research Council and the Institute of Medicine, 2001). Risk factors for MSD-UE in computer users include awkward postures (Carter and Banister, 1994) and wrist angular velocity and acceleration (Marras and Schoenmarklin, 1993). The assumption that a standard keyboard positions the wrists in postures that put the worker at risk for MSD-UE has lead to the development of “ergonomic” keyboards that are configured to provide engineering controls for the risky postures associated with MSD-UE. These keyboards are designed to reduce ulnar deviation, pronation, and extension of the wrists. The studies on the effects of ergonomic keyboard design on positioning the wrists have generally reported success in reducing non-neutral wrist postures during keyboarding (Baker and Cidboy, 2006; Marklin et al., 1999; Smith et al., 1998; Zecevic et al., 2000). Although little is known about what constitutes “risky” motions and actions for the hands and digits during keying it is possible to extrapolate some possible risk factors from present hypotheses about the effect of biomechanical forces on the tendons of the wrist and hand, and from research on hand motions for other tasks. Awkward postures of the wrists and digits can increase the forces acting on the tendons and tendon sheaths, and these increased forces may be associated with the development of MSD-UE (Goldstein et al., 1987; Pascarelli and Kella, 1993; Tanzer, 1999; Volz et al., 1980). In addition, higher levels of angular velocity and acceleration of the digit joints may be risk factors associated with digit movement. While there have been numerous studies examining the biomechanics of typing for body postures, head postures, arm postures, and wrist postures, there have been only three studies (Baker et al., 2007; Sommerich et al., 1998 and Sommerich et al., 1996) that have looked at the postures and actions of hands and digits during standard keyboard use. No studies have examined the effect of an ergonomic keyboard configuration on these postures. Hand displacement, defined as the overall translational movements of the hand during computer keyboarding also is potentially a risk factor for MSD-UE. Previous studies (Baker et al., 2007), as well as clinical observations, have suggested that computer keyboard users either continually move their hands to position the digits for keystrike or keep their hands still and reach out with the digits to strike the keys. Keyboard users who reach with their digits rather than move their wrist/forearms may increase non-neutral posture, such as wrist extension, ulnar deviation, and pronation which are believed to be important risk factors for MSD-UE (Goldstein et al., 1987; Marklin et al., 1999; Rempel et al., 1992 and Rempel et al., 1997; Schuind et al., 1990; Sommerich et al., 1998; Tanzer, 1999; Werner et al., 1997). This study compared the kinematics of the digits during typing on a standard keyboard configuration and an ergonomic keyboard configuration to determine if an ergonomic keyboard configuration reduced the digit postures and motions that are hypothesized to be risk factors for MSD-UE. The following two hypotheses were examined: (1) Participants using the ergonomic configuration would demonstrate significantly more neutral joint angles, slower joint angle velocities and reduced joint angle accelerations at the metacarpophalangeal (MCP) joint (flexion/extension and abduction/adduction) and proximal interphalangeal (PIP) joint (flexion/extension) compared to using the standard configuration; (2) Participants using the ergonomic configuration would demonstrate greater hand displacements compared to using the standard keyboard. In addition, this study examined the effect of keyboard configuration on productivity measurements (i.e. typing speed and error rates), and also described the keyboard users responses to using an ergonomic keyboard.

This study suggests that computer keyboard users adapt their kinematic performance to the environmental requirements suggested by the overall configuration of the keyboard: what they change in one plane of movement, they compensate for in another. This result raises an important question regarding the development of MSD-UE in computer users. Are movements in flexion/extension associated with MSD-UE in computer users more often than movements in abduction/adduction, or is it more risky to have increased abduction/adduction movements. Ergonomically configured keyboards appear to reduce the kinematics of the digits in one plane, only to increase them in another, a finding generally replicated in the literature on wrist postures during computer keyboard use (Baker and Cidboy, 2006). Therefore, to better understand if ergonomic configuration keyboards should be prescribed to reduce MSD-UE researchers must identify which of these kinematic variables, posture, velocity, and acceleration, in what planes constitute the greatest risk to computer users. Further research is needed to examine the association between digit postures and MSD-UE, as well as to examine the effect of different keyboard configurations on keyboard, wrist, and forearm kinematics as well as complaints of musculoskeletal discomfort. This study also needs to be expanded to look at the effect of different configurations on pronation of the forearm, and keystrike force. Additional information on alternate input devices, such as mouse use and trackball interaction would also be useful for understanding the effect of computer on the upper extremity during keyboard use. As the use of computers continues to increase, environmental controls, such as keyboard design, will become increasingly important in preventing MSD in a computer using population.