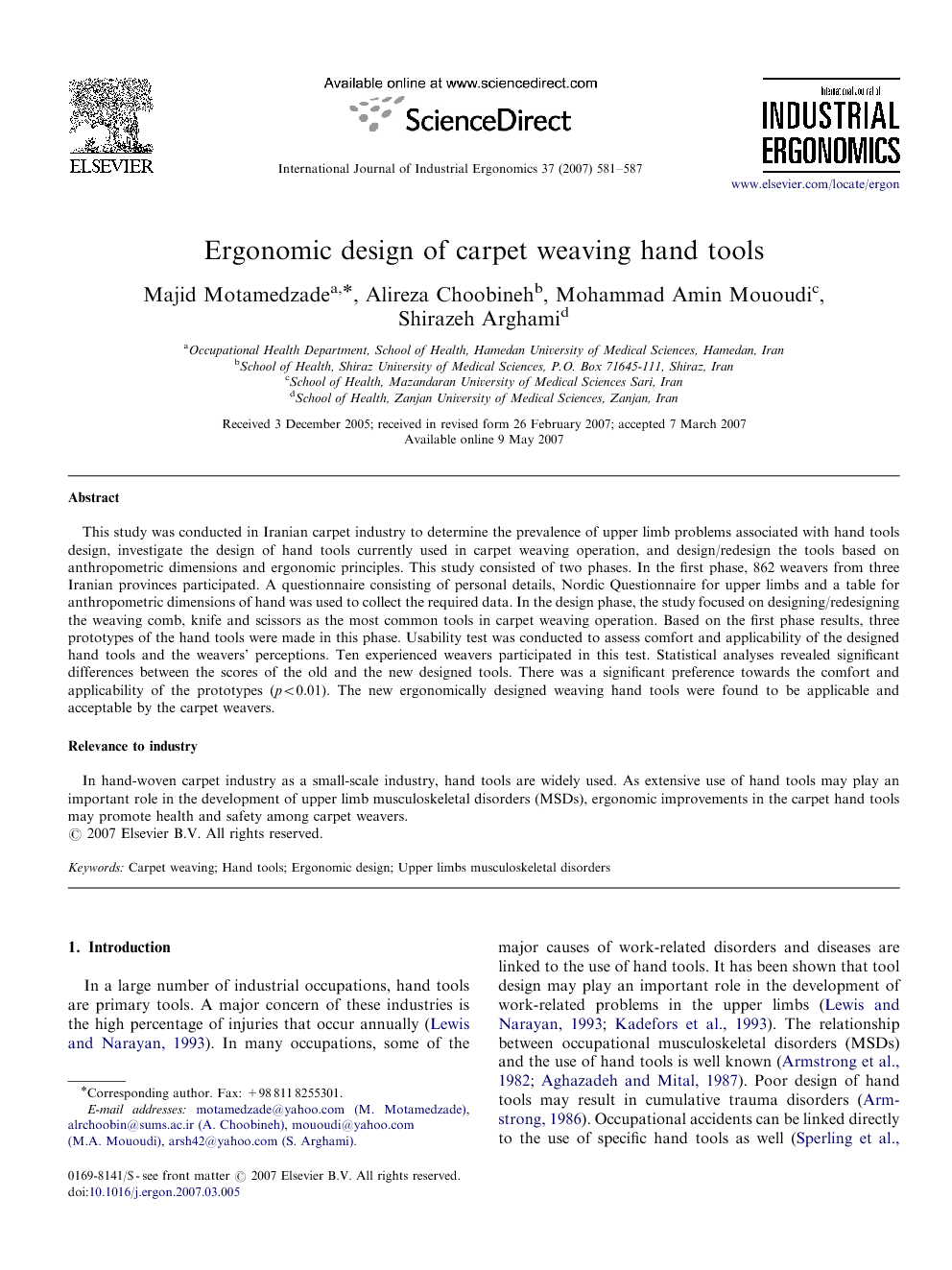 This study was conducted in Iranian carpet industry to determine the prevalence of upper limb problems associated with hand tools design, investigate the design of hand tools currently used in carpet weaving operation, and design/redesign the tools based on anthropometric dimensions and ergonomic principles. This study consisted of two phases. In the first phase, 862 weavers from three Iranian provinces participated. A questionnaire consisting of personal details, Nordic Questionnaire for upper limbs and a table for anthropometric dimensions of hand was used to collect the required data. In the design phase, the study focused on designing/redesigning the weaving comb, knife and scissors as the most common tools in carpet weaving operation. Based on the first phase results, three prototypes of the hand tools were made in this phase. Usability test was conducted to assess comfort and applicability of the designed hand tools and the weavers’ perceptions. Ten experienced weavers participated in this test. Statistical analyses revealed significant differences between the scores of the old and the new designed tools. There was a significant preference towards the comfort and applicability of the prototypes (p<0.01). The new ergonomically designed weaving hand tools were found to be applicable and acceptable by the carpet weavers. Relevance to industry In hand-woven carpet industry as a small-scale industry, hand tools are widely used. As extensive use of hand tools may play an important role in the development of upper limb musculoskeletal disorders (MSDs), ergonomic improvements in the carpet hand tools may promote health and safety among carpet weavers.

In a large number of industrial occupations, hand tools are primary tools. A major concern of these industries is the high percentage of injuries that occur annually (Lewis and Narayan, 1993). In many occupations, some of the major causes of work-related disorders and diseases are linked to the use of hand tools. It has been shown that tool design may play an important role in the development of work-related problems in the upper limbs (Lewis and Narayan, 1993; Kadefors et al., 1993). The relationship between occupational musculoskeletal disorders (MSDs) and the use of hand tools is well known (Armstrong et al., 1982; Aghazadeh and Mital, 1987). Poor design of hand tools may result in cumulative trauma disorders (Armstrong, 1986). Occupational accidents can be linked directly to the use of specific hand tools as well (Sperling et al., 1993). Ergonomically well-designed hand tools may reduce the risk of occupational injuries of the upper limbs. They also provide comfortable work for the users and give high product quality to the consumers (Sperling et al., 1993). Carpet hand weaving is a common practice in different countries such as Iran, China, Turkey, India, Pakistan, Russia, Egypt, Nepal and Afghanistan where intense use of hand tools is observed (Choobineh et al., 2004a). Upper limbs problems are prevalent as work-related MSDs among weavers. Kutluhan et al. (2001) believed that hand-made carpet weavers were exposed to varying degrees of repetitive and forceful hand and wrist motions with non-ergonomic hand tools and they seemed to be at increased risk of developing upper limbs musculoskeletal symptoms and carpal tunnel syndrome (CTS). They concluded that weaving was a high-risk profession for upper extremity repetitive strain and CTS. Radjabi declared that constant tying of knots with non-ergonomic hand tools might result in swollen finger joints, arthritis and neuralgia, causing permanent deformation of the fingers (Radjabi, 1983). Researches have proved that in weaving operation because of continuous use of wrists, fingers and repetitive movements, the risk of wrist and hand soft tissue, particularly median nerve, injuries are high (Senveli et al., 1987; Tan and Tan, 1998; Budak et al., 2001). In carpet weaving operation, more than 10 different kinds of hand tools are applied among them weaving comb, knife and scissors are the most commonly used. Basically, these are cheap tools made by blacksmiths using traditional and primitive technology from unsuitable materials and workmanship that noticeably contribute to accidents. They are traditionally designed and no ergonomics principle is applied in their structures (Choobineh et al., 2004b). As the use of hand tools may play an important role in the development of disorders and accidents, it is obvious that improvements in the design of hand tools are essential for promoting professional users’ health, particularly where there is intensive exposure. As given above, the present study was conducted in Iranian carpet industry to determine the prevalence of upper limb problems associated with hand tools design, investigate the design of hand tools currently used in carpet weaving operation and, if necessary, redesign the tools based on anthropometric characteristics of weavers’ hands and ergonomics principles.

This study showed that upper limbs MSDs occurred at a high rate among carpet weavers. From the usability test, it could be concluded that, new hand tools caused the concentration of contact stress on the palm of hand to be eliminated. The designed handles were perceived more comfortable than conventional ones. The new ergonomically designed weaving hand tools were found to be applicable and acceptable for the carpet weavers. However, further study is needed to make appropriate revisions to the ergonomically designed tools based on quantitative measures of musculoskeletal loading. In this study, no attempt was made to measure the effects of the new weaving hand tools on weavers’ performance. Further field trials will be needed to test efficiency under real production conditions.