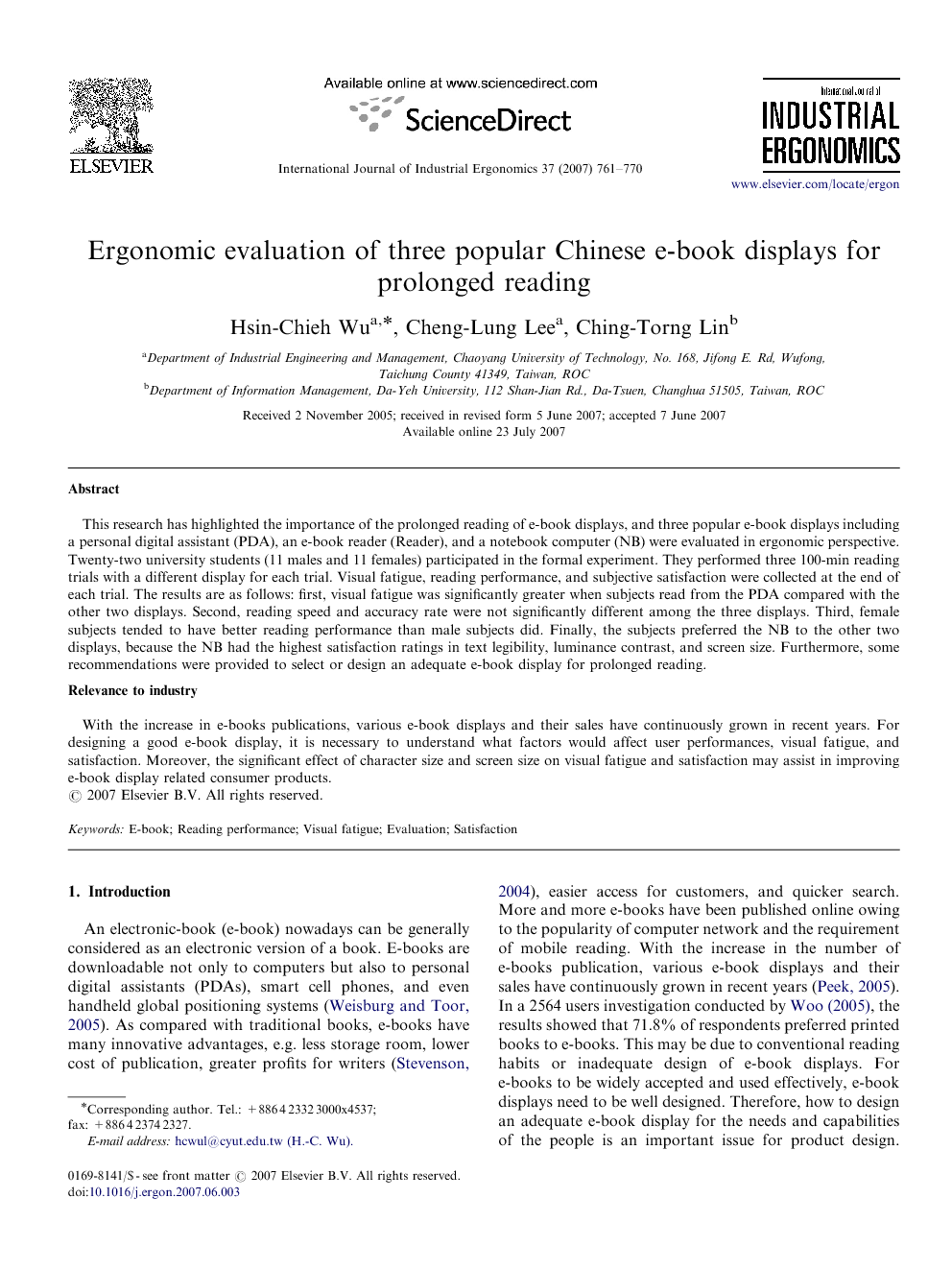 This research has highlighted the importance of the prolonged reading of e-book displays, and three popular e-book displays including a personal digital assistant (PDA), an e-book reader (Reader), and a notebook computer (NB) were evaluated in ergonomic perspective. Twenty-two university students (11 males and 11 females) participated in the formal experiment. They performed three 100-min reading trials with a different display for each trial. Visual fatigue, reading performance, and subjective satisfaction were collected at the end of each trial. The results are as follows: first, visual fatigue was significantly greater when subjects read from the PDA compared with the other two displays. Second, reading speed and accuracy rate were not significantly different among the three displays. Third, female subjects tended to have better reading performance than male subjects did. Finally, the subjects preferred the NB to the other two displays, because the NB had the highest satisfaction ratings in text legibility, luminance contrast, and screen size. Furthermore, some recommendations were provided to select or design an adequate e-book display for prolonged reading. Relevance to industry With the increase in e-books publications, various e-book displays and their sales have continuously grown in recent years. For designing a good e-book display, it is necessary to understand what factors would affect user performances, visual fatigue, and satisfaction. Moreover, the significant effect of character size and screen size on visual fatigue and satisfaction may assist in improving e-book display related consumer products.

An electronic-book (e-book) nowadays can be generally considered as an electronic version of a book. E-books are downloadable not only to computers but also to personal digital assistants (PDAs), smart cell phones, and even handheld global positioning systems (Weisburg and Toor, 2005). As compared with traditional books, e-books have many innovative advantages, e.g. less storage room, lower cost of publication, greater profits for writers (Stevenson, 2004), easier access for customers, and quicker search. More and more e-books have been published online owing to the popularity of computer network and the requirement of mobile reading. With the increase in the number of e-books publication, various e-book displays and their sales have continuously grown in recent years (Peek, 2005). In a 2564 users investigation conducted by Woo (2005), the results showed that 71.8% of respondents preferred printed books to e-books. This may be due to conventional reading habits or inadequate design of e-book displays. For e-books to be widely accepted and used effectively, e-book displays need to be well designed. Therefore, how to design an adequate e-book display for the needs and capabilities of the people is an important issue for product design. Besides, the question of which kind of the e-book display nowadays is more suitable for certain reading task may be a major problem for the users. This study was tried to resolve these problems mentioned above. For providing the suitability of different display to the users, numerous evaluations have been conducted in prior research. Early in 1980s, some researchers had found that reading speed on the cathode-ray tube (CRT) displays was about 20–30% slower than on a paper version of the same material (Gould and Grischkowsky, 1984; Gould et al., 1987). They concluded that some combination of variables such as experience of using CRT displays, character size, font type, and polarity might explain the differences. Wilkinson and Robinshaw (1987) also suggested that using a video display terminal (VDT) for proofreading tasks will lead to greater fatigue and lower performance. Besides, it was indicated that the noticeable flicker (Ostberg, 1989) and the screen resolution (Harpster et al., 1989) could affect recognition or search performance while using VDTs. All of the studies mentioned above were performed using CRT displays. Some results of these studies may not be generalizable to the thin film transistor liquid crystal display (TFT-LCD) because the TFT-LCD and CRT have different optical characteristics. Lessin (1992) indicated that the TFT-LCD was equivalent or superior to the CRT in many areas, such as cell brightness, viewability, color gamut, response time, weight, and power consumption. It was also shown that better visual identification performance and greater preference were obtained for the TFT-LCD than for the CRT (Shieh and Lin, 2000). This result evidenced the suggestion of Sanders and McCormick (1993)—reading from newer, higher-resolution VDTs should be as easy as reading from hardcopies. Mayes et al. (2001) conducted two experiments and revealed that people can, in fact, read information from a VDT as quickly as people can read the same information from a piece of paper. Therefore, it may not be necessary nowadays for arguing which medium would have better performance between e-books and paper books; it is more important to know how to choose an adequate display for reading e-books and how to design a proper text layout on the screen page. However, all of the previous studies focused on the performance and user preference evaluations of using desktop computers with 12- to 17-in monitors, but similar evaluations of portable e-book displays are relatively few. The popular portable e-book displays in Taiwan could be considered as a notebook computer (NB), an e-book reader (Reader), and a PDA (Ho and Chang, 2005). Because portable e-book displays have a completely different screen size and mechanism, the reading performance and subjective satisfaction for using e-book displays may not be the same as for using desktop computers. Chan et al. (2004) pointed out the participants took significantly more time (12 s) for reading 400 Chinese characters on the 3.8-in PDA than on the 17-in desktop computer. Contrarily, Ho and Chang (2005) studied 30 university students reading 200 Chinese characters on the 3.5-in PDA, 6.5-in Reader, and 14.1-in NB. Their results showed that no significant differences in time to completion among the three tested displays. One reason for the inconsistent results obtained by these researchers may be that the used character size and screen size differed between these two studies. The other reason may be that the text used by Ho and Chang (2005) was too short (200 characters) to have significant difference in time to completion among the three tested displays. Actually, people who are engaged in tasks such as lengthy novels, theses, patents, technical reports, etc. usually have great motivation and aspiration to continue reading for a long period over 1 or 2 h. The reason is that frequent rest breaks may disrupt a train of thought with high cognitive demand. According to Nishiyama's Study (1990), visual fatigue was observed in the VDT tasks, especially the tasks lasting for 90 min. From this review, the results obtained from short reading tasks (200–400 characters) may not be applied in prolonged reading tasks (over 10 000 characters). For satisfying the requirement of prolonged e-book reading, it is very important to design e-book displays free of causing visual fatigue for a long period over 90 min. Consequently, there is also a need to empirically evaluate visual fatigue and user satisfaction for prolonged usage of potable e-book displays. This study conducted an experiment to evaluate three popular e-book displays, i.e. NB, PDA, and Reader for prolonged reading. The main purpose of this experiment was to understand the differences in reading performance, visual fatigue, and subjective satisfaction among the three tested displays while reading a general novel for 100 min. Hopefully, some critical considerations for designing or selecting a good e-book display could be provided based on the findings of this study.

This study used an ergonomic perspective to evaluate different e-book displays in terms of visual fatigue, reading performance, and satisfaction. Notably, although the PDA had the advantages of being handy and multifunctional, greater visual fatigue resulted from its smaller screen size (3.5 in) and preset size of character (2.22×2.22 mm). This finding suggests that a small size of screen is a key limitation in applying the PDA to prolonged reading tasks. This study found that the subjects could continuously read from the Reader or the NB for 100 min without increasing visual fatigue as the character size was set to be 4.75×4.75 mm and the characters on each screen page were arranged in 15 lines, with 15 characters per line. Based on the consideration of usage purposes, we suggested that a NB and an Reader was the first choice for reading a prolonged e-book indoors and outdoors, respectively. For the performance measures, there were no significant differences in reading speed and accuracy rate among the three tested displays. This meant that the subjects were able to maintain the same level of reading performance by devoting more resources (e.g. reducing viewing distance) to the inferior displays and then they tired more rapidly. The e-book display designers are therefore recommended to create a display free of causing visual fatigue by setting sufficient large character size and luminance contrast ratio. Besides, the satisfaction evaluation results of this study can provide useful information for designing an e-book display to be favored by the users. This study tried to make the tested Chinese text attributes, workplace factors, and environmental factors as similar as possible for all conditions. But, it is still hard to avoid some variables being confounded because of the fundamental differences among the three tested displays, such as the screen size, resolution, and luminance contrast ratio. In order to fully understand the effect of single variable on performance or fatigue, some sequential researches should be conducted to manipulate each variable in the identical display. Since the current empirical data were obtained from healthy young adults, these results may not be applied to design an adequate e-book display for the children or older adults. Further studies are necessary to investigate whether these findings should be adjusted according to different age groups.