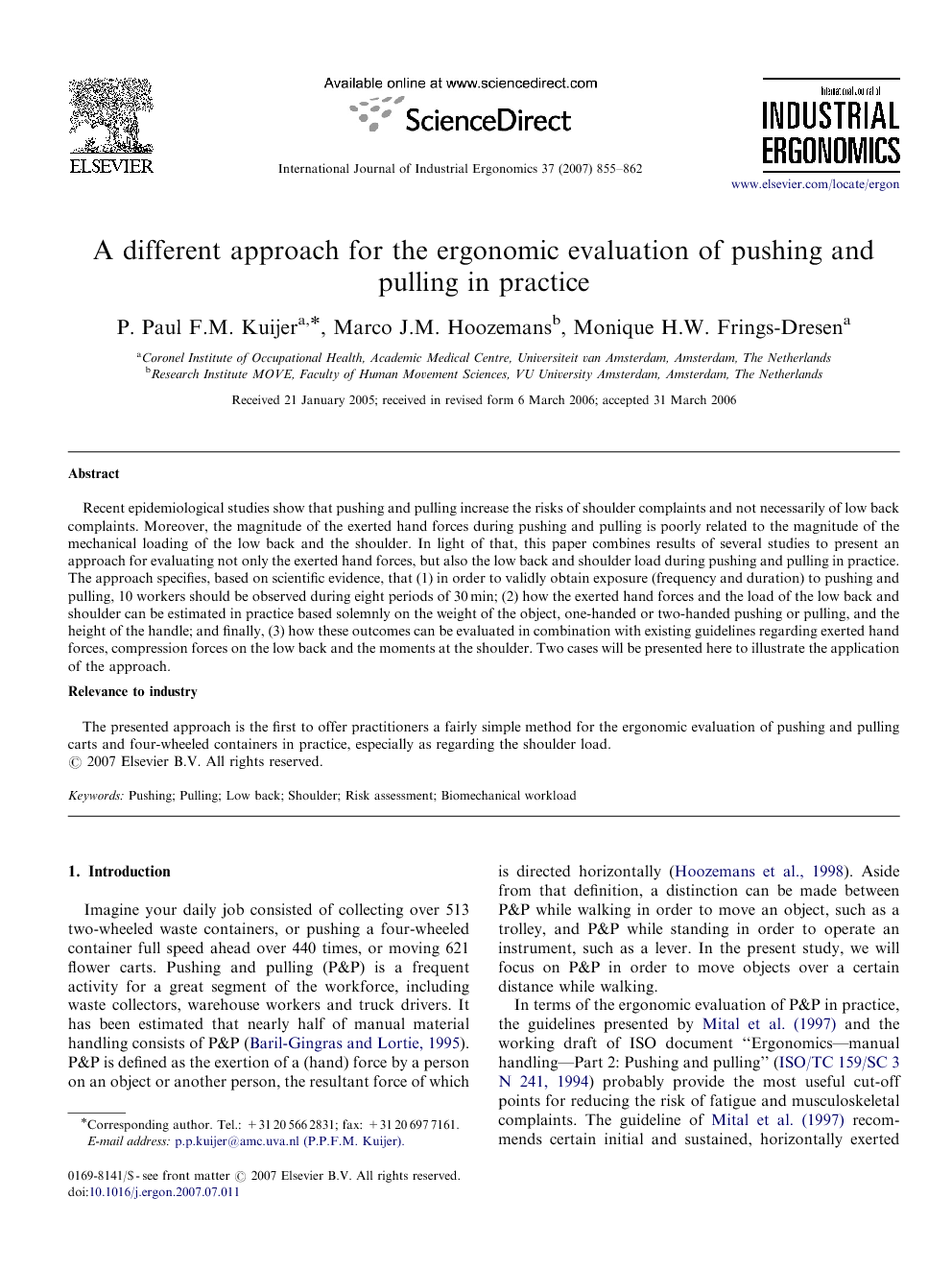 Imagine your daily job consisted of collecting over 513 two-wheeled waste containers, or pushing a four-wheeled container full speed ahead over 440 times, or moving 621 flower carts. Pushing and pulling (P&P) is a frequent activity for a great segment of the workforce, including waste collectors, warehouse workers and truck drivers. It has been estimated that nearly half of manual material handling consists of P&P (Baril-Gingras and Lortie, 1995). P&P is defined as the exertion of a (hand) force by a person on an object or another person, the resultant force of which is directed horizontally (Hoozemans et al., 1998). Aside from that definition, a distinction can be made between P&P while walking in order to move an object, such as a trolley, and P&P while standing in order to operate an instrument, such as a lever. In the present study, we will focus on P&P in order to move objects over a certain distance while walking. In terms of the ergonomic evaluation of P&P in practice, the guidelines presented by Mital et al. (1997) and the working draft of ISO document “Ergonomics—manual handling—Part 2: Pushing and pulling” (ISO/TC 159/SC 3 N 241, 1994) probably provide the most useful cut-off points for reducing the risk of fatigue and musculoskeletal complaints. The guideline of Mital et al. (1997) recommends certain initial and sustained, horizontally exerted hand forces for different percentiles of male and female industrial workers in one and two-handed P&P. They specify a maximum acceptable force, which depends on the handle height, frequency of P&P, and the P&P distance. The ISO working draft uses a risk assessment model consisting of three steps in total: (1) hazard identification (yes/no); (2) if identified, a risk assessment should follow based on the guidelines of Mital et al. (1997) (acceptable/not acceptable); and (3) if that risk assessment is not addressable, a so-called whole-body P&P force limit should be determined based on muscle strength and compressive lumbar strength (acceptable/conditionally acceptable/not acceptable). Thus, existing guidelines are based on perceived exertion, energetic workload, and partly on lumbar loading. However, epidemiological studies show that P&P appear to be a more significant risk factor for shoulder complaints than for low back complaints (Hoozemans et al., 2002; Harkness et al., 2003; Van Nieuwenhuyse et al., 2004). A 1-year prospective cohort study of several occupational groups found a significant relationship between P&P and shoulder complaints, but not low back complaints (Hoozemans et al., 2002). For the self-reported exposure, the prevalence ratio of reporting shoulder complaints was 2.9 (95% confidence interval (CI) 1.2–7.2) for the medium exposure group and 4.9 (95% CI 1.9–12.8) for the high exposure group as compared to a reference group. For low back complaints, no significant risk was observed. In a 2-year prospective cohort study of newly employed workers, P&P⩾31 kg (70 lbs) was associated with the highest risk estimate (1.9, 95% CI 1.1–3.3) for shoulder complaints, among several other mechanical and psychosocial factors (Harkness et al., 2003). In a cross sectional study on first-ever low back pain among workers in their first job, P&P activities were not associated with low back pain (1.01, 95% CI 0.6–1.8) (Van Nieuwenhuyse et al., 2004). Although P&P have been found to be related to shoulder complaints, existing guidelines do not account for shoulder load. In addition, the guidelines focus on the maximum acceptable push or pull forces. This may suggest that the magnitude of force exertion is directly related to mechanical loading. However, Hoozemans et al. (2004) could not confirm the assumption that higher magnitudes of initial and sustained exerted forces were related to higher magnitudes of the mechanical loading of the low back and shoulder. One explanation is that the direction of the P&P force has a large effect on the mechanical load (De Looze et al., 2000). Another consideration that guidelines should take into account as regarding force exertion is that it is often difficult in practice to make valid assessments of these forces. Preferably, forces should be measured in three directions simultaneously (Annex D, working draft of ISO document “Ergonomics—manual handling—Part 2: Pushing and pulling” (ISO/TC 159/SC 3 N 241, 1994). Moreover, contrary to the approach proposed in the working draft, it appears that five repeated force measures are necessary per worker in order to obtain a reliable estimate of exerted P&P forces at the individual level. To make a clear distinction between two groups of workers, at least seven workers must be assessed, as within-worker variance is considerably smaller than between-worker variance (Van der Beek et al., 1999; Hoozemans et al., 2001). The present paper introduces a different approach for the ergonomic evaluation of P&P that is complementary to the guidelines described above. This approach enables the practitioner to estimate the exerted hand forces based on P&P characteristics: (1) weight of the object; (2) the number of hands used; (3) the handle height; and (4) the specific activity, i.e., pushing or pulling. The biomechanical load of the shoulder and low back are estimated based on the same P&P characteristics. Despite the results of the epidemiological studies, working conditions that pose an increased risk of low back complaints may still be present. The outcomes can be compared to guidelines for exerted hand forces and low back and shoulder load, aimed at reducing the risk of fatigue complaints and musculoskeletal complaints. In addition, this approach specifies how a task analysis should be performed in order to obtain reliable estimates for the duration and frequency of P&P. This paper seeks to introduce a different approach and illustrates its use by presenting two cases.

4.1. Pros and cons This paper presents a different approach for evaluating the risks associated with P&P in practice. The approach specifies, based on scientific evidence, that (1) in order to validly obtain exposure (frequency and duration) to P&P, 10 workers should be observed during eight periods of 30 min; (2) how the exerted hand forces and the load of the low back and shoulder can be estimated in practice based solemnly on the weight of the object, one-handed or two-handed pushing or pulling, and the height of the handle; and finally, (3) how these outcomes can be evaluated in combination with existing guidelines regarding exerted hand forces, compression forces on the low back and the moments at the shoulder. We feel that this approach does more justice to recent findings that the magnitude of the force exerted is not strongly related to the magnitude of the mechanical loading of the low back and the shoulder, and that P&P increases the risk of shoulder complaints. The model used to quantify the effect on the forces exerted and the mechanical load of the low back and shoulders is specifically tailored for the cart and surface used in the study of Hoozemans et al. (2004). Thus, the absolute magnitude of the forces exerted and mechanical load may be different for other carts and surfaces. Jung et al. (2005) present an overview of design factors, task factors, environmental factors and operator factors that influence the workload during P&P. In the study of Hoozemans et al. (2004), the wheels of the cart were well maintained, the castor wheels were placed perpendicular to the P&P direction, the floor was even and clean, the cart's rolling resistance was comparable to that of an asphalt surface, and no obstacles were present. In light of the above, we expect our approach, when used in practice, to yield results that offer a good estimate of the forces exerted and actual workload. The approach uses psychophysical, physiological, and biomechanical guidelines with a view to preventing both fatigue and musculoskeletal complaints. In this respect, the present approach is similar to the third step in the working draft of ISO document “Ergonomics—manual handling—Part 2: Pushing and pulling” (ISO/TC 159/SC 3 N 241, 1994). Aside from drawing on the guidelines in the working draft, the present approach uses an evidence-based method of obtaining a precise estimate of the frequency and duration of P&P in practice. Moreover, it is the only practical tool that estimates the shoulder load. Naturally, epidemiological evaluations of whether the estimated force exertion and mechanical workload, and the cut-off points for acceptable and unacceptable workloads, are related to an increased risk for low back and shoulder complaints should confirm the validity of this approach. 4.2. Utility For practitioners, the approach presented here offers a cookbook strategy for obtaining a precise estimate of the frequency and duration of P&P. Exposure assessments based solely on job descriptions or expert opinions will most likely lead to misclassification (Van der Beek and Frings-Dresen, 1998). In most cases, therefore, a more time-consuming task analysis should be performed. The advantage of the present approach is that it is more effective in determining actual variation between workers. In our experience, most clients value this increase in precision because of the economic consequences they would face if the working conditions they offer employees failed to meet the standards for approval. In contrast to the guidelines presented by Mital et al. (1997) and the working draft of ISO document “Ergonomics—manual handling—Part 2: Pushing and pulling,” hand force exertion does not need to be measured in practice, but can be estimated using this approach. Therefore, the measurement strategy of performing five repeated force measures for seven workers to obtain a reliable estimate of the P&P forces exerted (Van der Beek et al., 1999; Hoozemans et al., 2001), which is more time consuming than the approach proposed in the ISO working draft, does not have to be performed. Moreover, the presented approach in this paper can be used to estimate the effect of different working techniques, or ergonomic interventions, on workloads with a view to reducing the risk of fatigue and musculoskeletal complaints. With regard to the working techniques in the distribution centre mentioned earlier, it was established that pushing with two hands at shoulder height, instead of pulling at hip height, considerably reduces force exertion and mechanical loading of the low back and shoulder. This brings us now to the issue of ergonomic interventions. In the case of the waste collection company, it was possible to calculate beforehand whether a weight reduction in the four-wheeled waste container or in the contents of the container could significantly reduce the mechanical load of the shoulder during waste collection, and whether this preventive measure might be a promising intervention to follow up on.