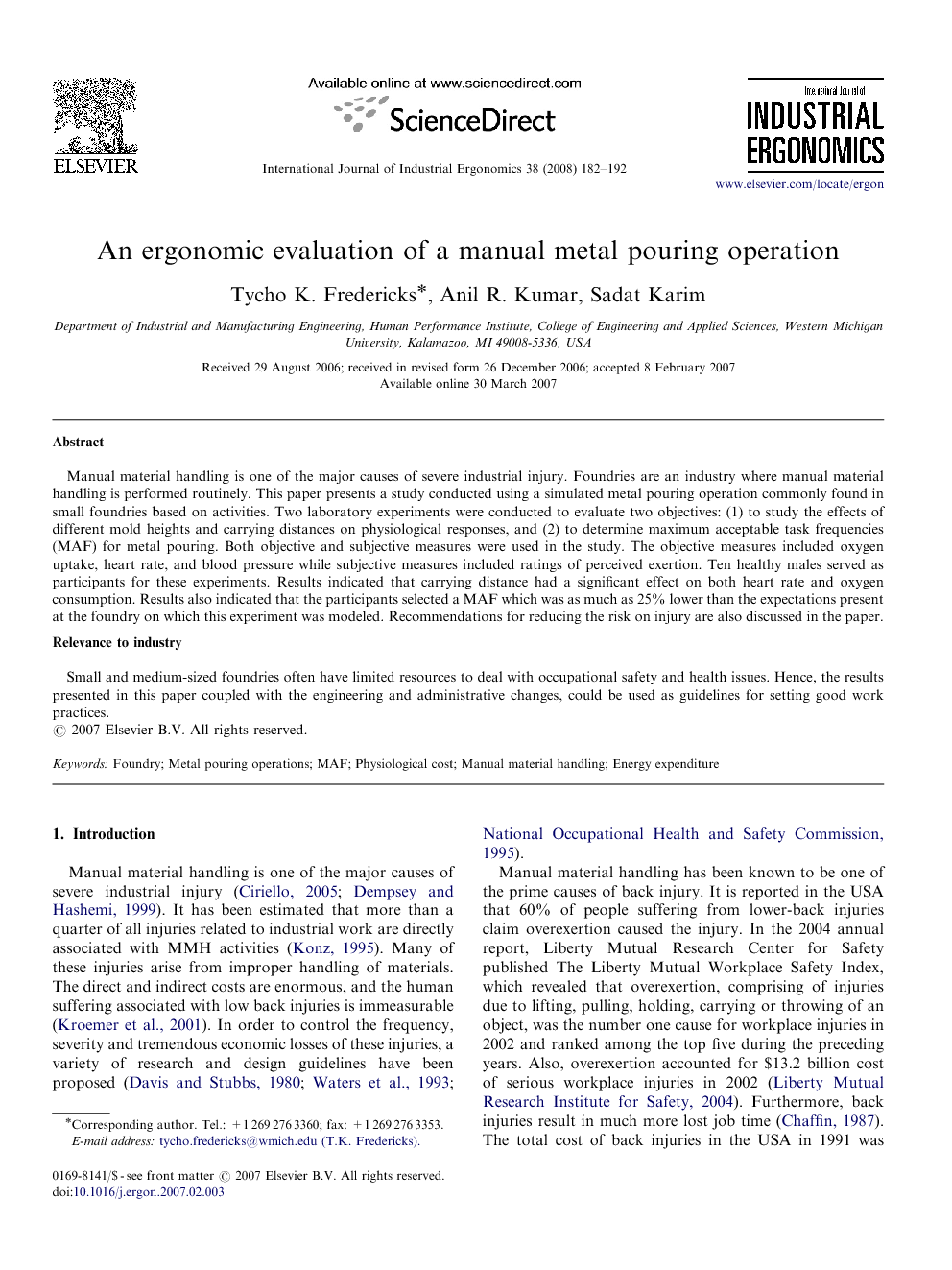 Manual material handling is one of the major causes of severe industrial injury. Foundries are an industry where manual material handling is performed routinely. This paper presents a study conducted using a simulated metal pouring operation commonly found in small foundries based on activities. Two laboratory experiments were conducted to evaluate two objectives: (1) to study the effects of different mold heights and carrying distances on physiological responses, and (2) to determine maximum acceptable task frequencies (MAF) for metal pouring. Both objective and subjective measures were used in the study. The objective measures included oxygen uptake, heart rate, and blood pressure while subjective measures included ratings of perceived exertion. Ten healthy males served as participants for these experiments. Results indicated that carrying distance had a significant effect on both heart rate and oxygen consumption. Results also indicated that the participants selected a MAF which was as much as 25% lower than the expectations present at the foundry on which this experiment was modeled. Recommendations for reducing the risk on injury are also discussed in the paper. Relevance to industry Small and medium-sized foundries often have limited resources to deal with occupational safety and health issues. Hence, the results presented in this paper coupled with the engineering and administrative changes, could be used as guidelines for setting good work practices.

Manual material handling is one of the major causes of severe industrial injury (Ciriello, 2005; Dempsey and Hashemi, 1999). It has been estimated that more than a quarter of all injuries related to industrial work are directly associated with MMH activities (Konz, 1995). Many of these injuries arise from improper handling of materials. The direct and indirect costs are enormous, and the human suffering associated with low back injuries is immeasurable (Kroemer et al., 2001). In order to control the frequency, severity and tremendous economic losses of these injuries, a variety of research and design guidelines have been proposed (Davis and Stubbs, 1980; Waters et al., 1993; National Occupational Health and Safety Commission, 1995). Manual material handling has been known to be one of the prime causes of back injury. It is reported in the USA that 60% of people suffering from lower-back injuries claim overexertion caused the injury. In the 2004 annual report, Liberty Mutual Research Center for Safety published The Liberty Mutual Workplace Safety Index, which revealed that overexertion, comprising of injuries due to lifting, pulling, holding, carrying or throwing of an object, was the number one cause for workplace injuries in 2002 and ranked among the top five during the preceding years. Also, overexertion accounted for $13.2 billion cost of serious workplace injuries in 2002 (Liberty Mutual Research Institute for Safety, 2004). Furthermore, back injuries result in much more lost job time (Chaffin, 1987). The total cost of back injuries in the USA in 1991 was reported to be between 50 and 100 billion dollars (National Institute for Occupational Safety and Health, 1997). For several decades the elimination, or at least a reduction in the risk of injury due to lifting tasks has been a topic of interest in many fields of research. Researchers have utilized various approaches/techniques such as epidemiological approach (Chaffin et al., 1976 and Chaffin et al., 1978; Arad and Ryan, 1985), postural analyses (Genaidy et al., 1994; Kuorinka et al., 1994), biomechanical approach (Andersson, 1985; Freivalds et al., 1984; Hsiang and Ayoub, 1994), physiological approach (Kumar, 1984; Damlund et al., 1986), and the psychophysical approach (Ayoub et al., 1978; Mital and Okolie, 1982; Snook et al., 1970; Snook and Ciriello, 1974) to evaluate and quantify the relationships between imposed stresses and the resulting strain, and thereby, control the pervasive overexertion injury and back problem. A hazardous task observed in the foundry, which could contribute to low back injuries involves pouring molten metal. Automation has been exercised as an option in large scale foundries. However, due to the high cost of automating metal pouring operations, many small scale foundries in the Southwest Michigan still utilize the manual method for pouring metal. Karim et al. (1998) conducted a study in a foundry to document energy expenditure while pouring metal at different combinations of mold heights and carrying distances. The study, which was conducted in early spring (mid March) in Michigan, provided insight about task requirements. This study builds upon that endeavor by creating two experiments which replicate the task demands in a laboratory environment. The objectives of the experiments were to: (1) study the effects of different mold heights and carrying distances on physiological indices, and (2) determine maximum acceptable task frequencies (MAF).

Installation of mechanical aids such as pneumatic lifts, conveyors, and/or automated material handling equipment will undoubtedly decrease the risk of back injuries for workers employed by foundries. Unfortunately small to mid-size foundries will generally find this cost prohibitive and search for other risk reduction solutions. Although manual metal pouring is an inherently hazardous operation, this study demonstrates that by reducing the line speed and carrying distance, the amount of energy to complete the task can be significantly reduced. Further investigations are necessary to identify the distance at which the carrying distance and mold height becomes significant, as well as the effect of heat stress on MAF. With this type of information available, appropriate work-rest cycles could be designed and incorporated into many small to mid-size foundry processes. The recommendations highlighted here, coupled with appropriate training could reduce worker's compensation claims for those who are involved in manual metal pouring.