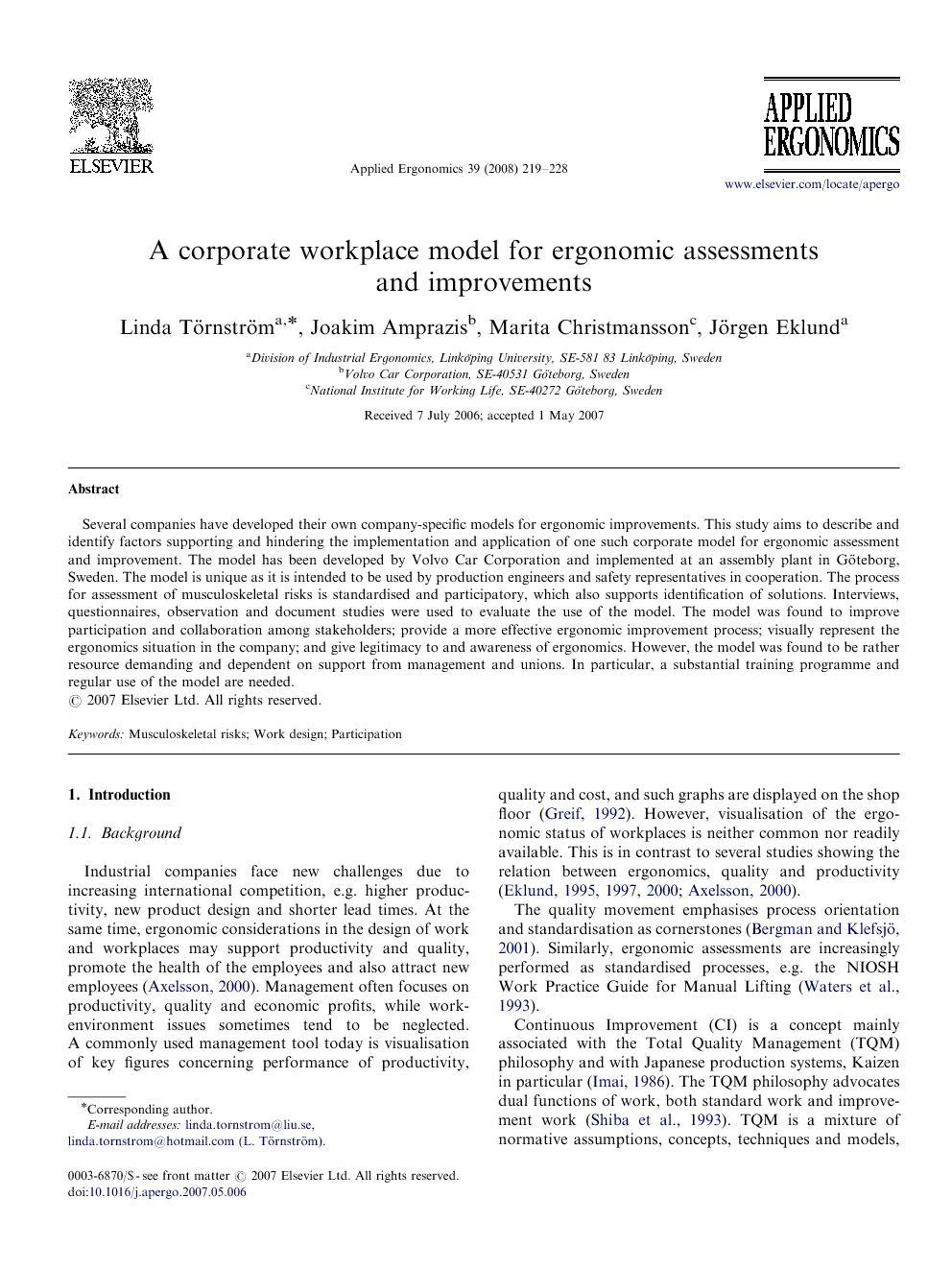 Several companies have developed their own company-specific models for ergonomic improvements. This study aims to describe and identify factors supporting and hindering the implementation and application of one such corporate model for ergonomic assessment and improvement. The model has been developed by Volvo Car Corporation and implemented at an assembly plant in Göteborg, Sweden. The model is unique as it is intended to be used by production engineers and safety representatives in cooperation. The process for assessment of musculoskeletal risks is standardised and participatory, which also supports identification of solutions. Interviews, questionnaires, observation and document studies were used to evaluate the use of the model. The model was found to improve participation and collaboration among stakeholders; provide a more effective ergonomic improvement process; visually represent the ergonomics situation in the company; and give legitimacy to and awareness of ergonomics. However, the model was found to be rather resource demanding and dependent on support from management and unions. In particular, a substantial training programme and regular use of the model are needed.

1.1. Background Industrial companies face new challenges due to increasing international competition, e.g. higher productivity, new product design and shorter lead times. At the same time, ergonomic considerations in the design of work and workplaces may support productivity and quality, promote the health of the employees and also attract new employees (Axelsson, 2000). Management often focuses on productivity, quality and economic profits, while work-environment issues sometimes tend to be neglected. A commonly used management tool today is visualisation of key figures concerning performance of productivity, quality and cost, and such graphs are displayed on the shop floor (Greif, 1992). However, visualisation of the ergonomic status of workplaces is neither common nor readily available. This is in contrast to several studies showing the relation between ergonomics, quality and productivity (Eklund, 1995, Eklund, 1997 and Eklund, 2000; Axelsson, 2000). The quality movement emphasises process orientation and standardisation as cornerstones (Bergman and Klefsjö, 2001). Similarly, ergonomic assessments are increasingly performed as standardised processes, e.g. the NIOSH Work Practice Guide for Manual Lifting (Waters et al., 1993). Continuous Improvement (CI) is a concept mainly associated with the Total Quality Management (TQM) philosophy and with Japanese production systems, Kaizen in particular (Imai, 1986). The TQM philosophy advocates dual functions of work, both standard work and improvement work (Shiba et al., 1993). TQM is a mixture of normative assumptions, concepts, techniques and models, including CI (see e.g. Deming, 1986; Hackman and Wageman, 1995; Glover, 2000; Bergman and Klefsjö, 2001). From an organisational design perspective CI has been defined as “a purposeful and explicit set of principles, mechanisms, and activities within an organisation adopted to generate ongoing, systematic and cumulative improvement in deliverables, operating procedures and systems” (Lillrank et al., 2001). The development activities may, e.g., be directed towards the way production work itself is carried out, or towards improving the processes employed for development (Eklund, 2000). Participation is an important cornerstone of TQM (Bergman and Klefsjö, 2001; Imai, 1986). Participation of employees on all levels in the development of work and work environments is similarly an important concept in modern ergonomics, and as many persons as possible should be involved in the process of improvement (Noro and Imada, 1991). Participatory ergonomics is described as “the involvement of people in planning and controlling a significant amount of their own work activities, with sufficient knowledge and power to influence both processes and outcomes in order to achieve desirable goals” by Haines and Wilson (1998). Cutton et al. (1988) point out that it is vitally important to have workers develop ideas for improvement in collaboration with managers. The improvement process differs depending on the approach or strategy a company uses. One way of developing the participatory approach is to provide the operators with simple methods for self-assessment of working conditions (Hägg, 2003). In Sweden, the legislation on working conditions is rather detailed and enforces a participatory approach by means of, e.g., health and safety committees. One regulation (AFS, 1998:1) contains recommendations for postures, reach, lifting, etc. The trade unions in Sweden have a tradition of cooperation with companies on these issues and make sure that the legislation is followed. Current work with work environmental issues and musculoskeletal load are based on the PDCA cycle, CI and participation from the quality concept through “systematic work environment improvement” (AFS, 2001:1), which companies in Sweden are required to follow. Many companies develop their own model to deal with these issues. Work with ergonomics is still often seen as solely a matter of health and safety. Only a few companies have reached the state where ergonomics constitutes an integrated part of the overall strategy of the enterprise (Hägg, 2003). 1.2. The case company The case company, Volvo Car Corporation, Göteborg, Sweden is a car manufacturing company, owned by Ford Motor Company since 1999. In 2005, Volvo Cars manufactured approximately 444,000 cars in their plants at Torslanda, Göteborg and Ghent, Belgium. Of these, 193,000 cars were produced in the Torslanda plant of the S80, V70, XC70 and XC90 models. About 5500 people are employed at the Torslanda plant. The plant was built in 1964 and consists of press, body, paint and assembly shops. Design and production planning are also situated in Göteborg. The final assembly plant consists of thirty manufacturing departments, divided into five areas. In addition, there is a manufacturing engineering department. Volvo Cars has a tradition of attention to the work environment and over the years has developed a working environment management system, an organisational strategy for the participation of everyone, a working environment policy, standards and methods for efficient practical performance (Munck-Ulfsfält et al., 2003). During 2002 and 2003 a corporate ergonomic model called BME was developed by Volvo Car Corp. BME, in free translation is ‘Ergonomic Assessment Model’. The BME Model contains both criteria and limits for posture, force, and frequency, and has an integrated organisational position in Volvo's Safety and Health System. The model is intended to be used by a team consisting of a production engineer and a safety representative. Therefore this model is unique, as most models are developed as expert methods. The trade union and management negotiated an agreement for the implementation of the BME model. The main reason for company management to implement BME was that available models were not specifically adapted to their type of production. Also, there are too few ergonomists, and therefore, capacity to evaluate the large number of existing jobs is lacking. Furthermore, ergonomics experts often come to different conclusions, which emphasises the need for a standardised assessment model, easily used by the workers themselves. The decision was also based on economic reasons, as the relationship between quality and ergonomics was well known by several decision makers and ergonomic experts at the plant. 1.3. Aim The aim of this article is to describe and identify factors which support and hinder the use, implementation and application of the BME corporate model for ergonomic assessment and improvement.

The Volvo BME model was developed and implemented in order to improve cooperation between engineers and safety representatives, to obtain standardised processes for ergonomic assessments, and to obtain more effective improvements and a better working environment.