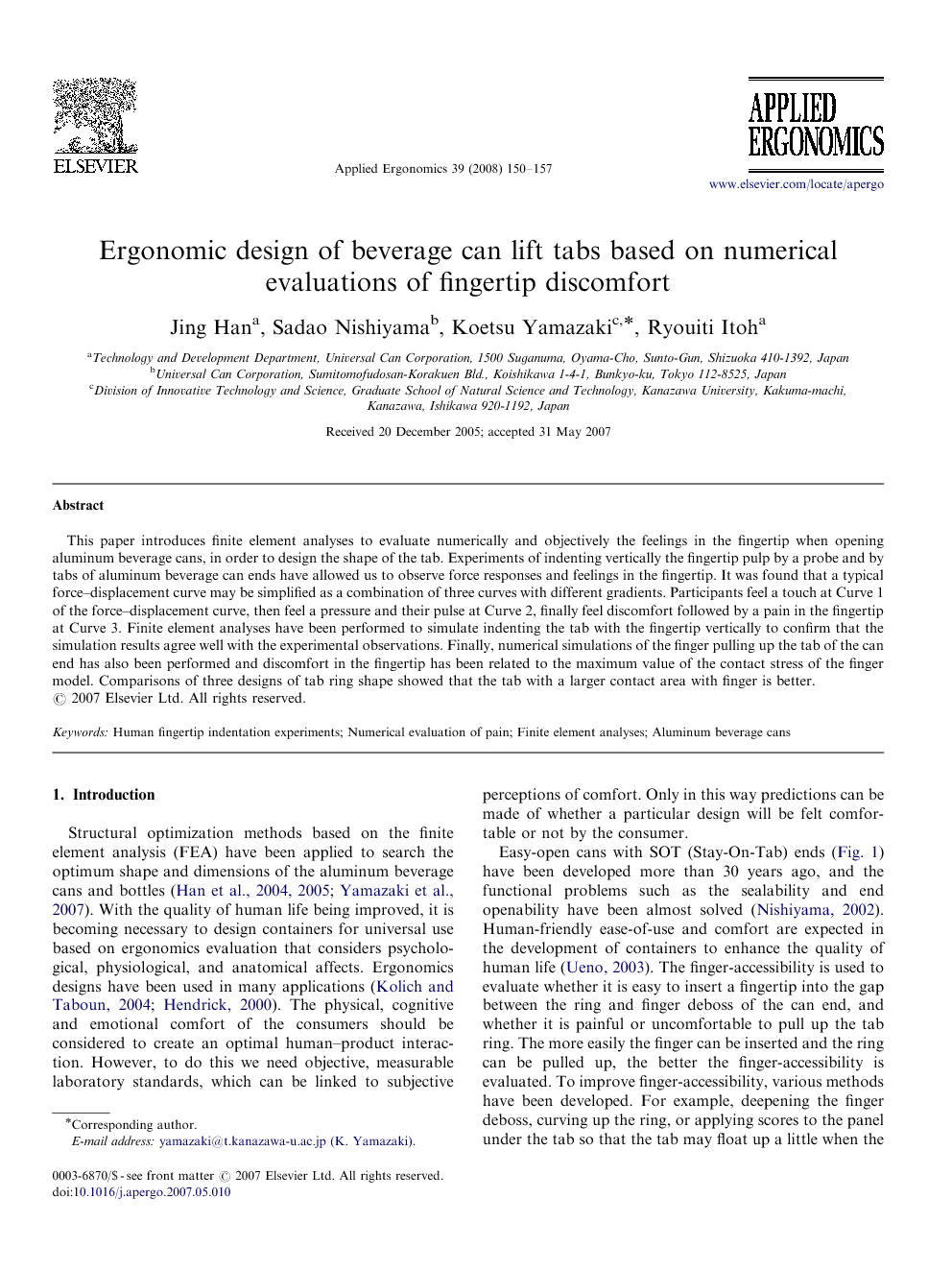 This paper introduces finite element analyses to evaluate numerically and objectively the feelings in the fingertip when opening aluminum beverage cans, in order to design the shape of the tab. Experiments of indenting vertically the fingertip pulp by a probe and by tabs of aluminum beverage can ends have allowed us to observe force responses and feelings in the fingertip. It was found that a typical force–displacement curve may be simplified as a combination of three curves with different gradients. Participants feel a touch at Curve 1 of the force–displacement curve, then feel a pressure and their pulse at Curve 2, finally feel discomfort followed by a pain in the fingertip at Curve 3. Finite element analyses have been performed to simulate indenting the tab with the fingertip vertically to confirm that the simulation results agree well with the experimental observations. Finally, numerical simulations of the finger pulling up the tab of the can end has also been performed and discomfort in the fingertip has been related to the maximum value of the contact stress of the finger model. Comparisons of three designs of tab ring shape showed that the tab with a larger contact area with finger is better.

Structural optimization methods based on the finite element analysis (FEA) have been applied to search the optimum shape and dimensions of the aluminum beverage cans and bottles (Han et al., 2005 and Han et al., 2004; Yamazaki et al., 2007). With the quality of human life being improved, it is becoming necessary to design containers for universal use based on ergonomics evaluation that considers psychological, physiological, and anatomical affects. Ergonomics designs have been used in many applications (Kolich and Taboun, 2004; Hendrick, 2000). The physical, cognitive and emotional comfort of the consumers should be considered to create an optimal human–product interaction. However, to do this we need objective, measurable laboratory standards, which can be linked to subjective perceptions of comfort. Only in this way predictions can be made of whether a particular design will be felt comfortable or not by the consumer. Easy-open cans with SOT (Stay-On-Tab) ends (Fig. 1) have been developed more than 30 years ago, and the functional problems such as the sealability and end openability have been almost solved (Nishiyama, 2002). Human-friendly ease-of-use and comfort are expected in the development of containers to enhance the quality of human life (Ueno, 2003). The finger-accessibility is used to evaluate whether it is easy to insert a fingertip into the gap between the ring and finger deboss of the can end, and whether it is painful or uncomfortable to pull up the tab ring. The more easily the finger can be inserted and the ring can be pulled up, the better the finger-accessibility is evaluated. To improve finger-accessibility, various methods have been developed. For example, deepening the finger deboss, curving up the ring, or applying scores to the panel under the tab so that the tab may float up a little when the can is filled with beverages and pressured (Yoshida and Yoshizawa, 1996). All of these methods are trying to enlarge the gap between the ring and the finger deboss to allow a fingertip to go into the gap easily and consequently to improve finger-accessibility. Since there are limitations of these methods, such as a clearance restriction between the tab and the top edge of the seaming wall, the geometrical shapes of the tab ring need to be investigated.On the other hand, the fingertip is a most sensitive and important part of the human body for obtaining information by touching an objective and controlling manipulation. Experimental results show that the fingertip is almost incompressible for a point indentor, with the highest change in volume occurring at the largest depth of indentation (Srinivasan et al., 1992). A study of Serina et al. (1997) has reported that few statistically significant Pearson correlations were found among the relationships of pulp parameters (such as, pulp displacement and stiffness) with fingertip dimensions, gender, and subject age. FEAs have been performed to predict surface deformations of the fingertip (Srinivasan and Dandekar, 1996), and geometric and structural models of the fingertip pulps supported by experimental data, have been developed to predict the force–displacement and force–contact area responses of the human fingertip during contact with a flat, rigid surface (Serina et al., 1998). Experiments that present stimuli with spherically curved surfaces to the fingertip pulps of human subjects have been performed, and it is observed that an increase in curvature (with no change in contact force) results in a sharper and higher response profile as well as an increase in perceived contact force (Goodwin and Wheat, 1992). Perception of surface pressure applied to the fingers has been investigated experimentally, and the pressure level at which human subjects perceive a pain has been measured as the pain pressure threshold (Brennum et al., 1989; Fransson-Hall and Kilbom, 1993; Johansson et al., 1999). Statistical analysis showed that the average pain pressure threshold of males is higher than that of females. Moreover, the finite element method was applied to simulate the configuration change of the human fingertip when grasping an aluminum beverage bottle for hot vending and then to evaluate the tactile sensation of heat numerically (Han et al., 2006). However, no studies have been found on the relationship between the pain and the force–displacement curves when a load is applied to the fingertip pulp. This paper introduces FEA into the ergonomics design of the ends of aluminum beverage cans to evaluate numerically perceptions of discomfort. First, using a tension–compression tester, experiments with a probe and tabs of beverage can ends indenting the finger pulp vertically were performed. The deformation of the configuration of the fingertip and the pain experienced were measured. Simulations of tabs indenting the fingertip vertically were then performed using the finite element code, and compared to the experimental observations. The process of the index finger pulling up the tab of SOT ends was also simulated by the nonlinear FEAs, and the sensation of discomfort in the fingertip was evaluated numerically by the maximum value of the contact normal stress. Three kinds of tab models with different ring designs were analyzed numerically and thus finger-accessibility was compared.