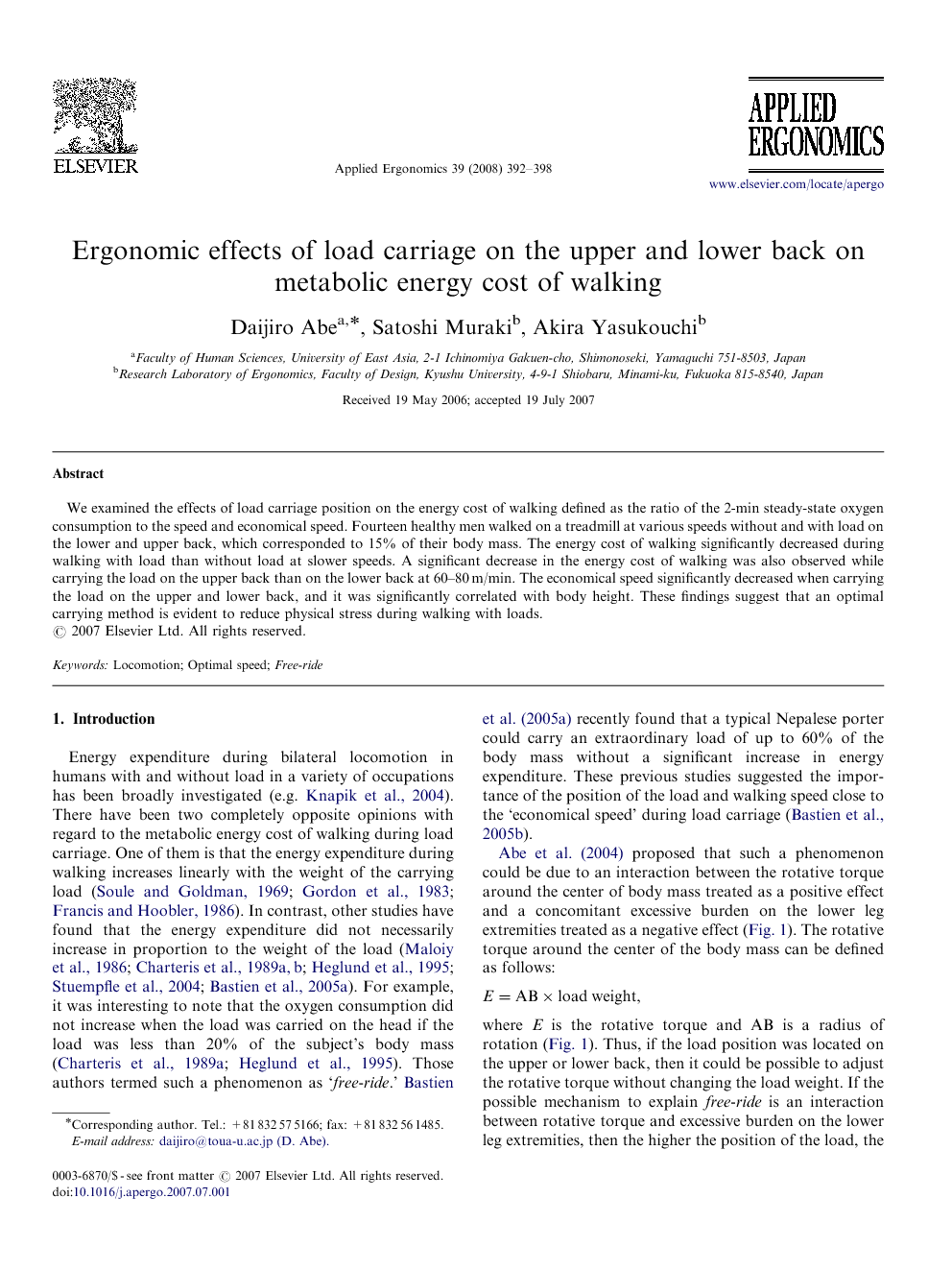 We examined the effects of load carriage position on the energy cost of walking defined as the ratio of the 2-min steady-state oxygen consumption to the speed and economical speed. Fourteen healthy men walked on a treadmill at various speeds without and with load on the lower and upper back, which corresponded to 15% of their body mass. The energy cost of walking significantly decreased during walking with load than without load at slower speeds. A significant decrease in the energy cost of walking was also observed while carrying the load on the upper back than on the lower back at 60–80 m/min. The economical speed significantly decreased when carrying the load on the upper and lower back, and it was significantly correlated with body height. These findings suggest that an optimal carrying method is evident to reduce physical stress during walking with loads.

Energy expenditure during bilateral locomotion in humans with and without load in a variety of occupations has been broadly investigated (e.g. Knapik et al., 2004). There have been two completely opposite opinions with regard to the metabolic energy cost of walking during load carriage. One of them is that the energy expenditure during walking increases linearly with the weight of the carrying load (Soule and Goldman, 1969; Gordon et al., 1983; Francis and Hoobler, 1986). In contrast, other studies have found that the energy expenditure did not necessarily increase in proportion to the weight of the load (Maloiy et al., 1986; Charteris et al., 1989a and Charteris et al., 1989b; Heglund et al., 1995; Stuempfle et al., 2004; Bastien et al., 2005a). For example, it was interesting to note that the oxygen consumption did not increase when the load was carried on the head if the load was less than 20% of the subject's body mass (Charteris et al., 1989a; Heglund et al., 1995). Those authors termed such a phenomenon as ‘free-ride.’ Bastien et al. (2005a) recently found that a typical Nepalese porter could carry an extraordinary load of up to 60% of the body mass without a significant increase in energy expenditure. These previous studies suggested the importance of the position of the load and walking speed close to the ‘economical speed’ during load carriage (Bastien et al., 2005b). Abe et al. (2004) proposed that such a phenomenon could be due to an interaction between the rotative torque around the center of body mass treated as a positive effect and a concomitant excessive burden on the lower leg extremities treated as a negative effect (Fig. 1). The rotative torque around the center of the body mass can be defined as follows: View the MathML sourceE=AB×loadweight, Turn MathJax on where E is the rotative torque and AB is a radius of rotation (Fig. 1). Thus, if the load position was located on the upper or lower back, then it could be possible to adjust the rotative torque without changing the load weight. If the possible mechanism to explain free-ride is an interaction between rotative torque and excessive burden on the lower leg extremities, then the higher the position of the load, the lower the energy expenditure, because the rotative torque, represented as E in Fig. 1, will contribute to the forward propulsion (defined as horizontal acceleration of the body) during walking. To test such a mechanism, the first purpose of this study was to examine the effects of load carriage on the lower and upper back at various speeds on the metabolic energy cost of walking. It was hypothesized that the metabolic energy cost of walking was lesser when the load was carried on the upper back of the subjects.The most important factor of the energy-conserving mechanism during walking has been explained by the transfer efficiency between kinetic energy (Ek) and gravitational potential energy (Ep) (Cavagna et al., 1963). Minetti et al. (1995) reported that the transfer efficiency between Ek and Ep became maximal at around 70–80 m/min during walking, and it decreased gradually when walking at slower and/or faster than that speed. Thus, it is expected that there exists a specific speed that can minimize the metabolic energy cost of walking. The walking speed corresponding to the minimum energy cost per unit distance has been called the economical speed or optimal speed (Falola et al., 2000; Bastien et al., 2005b). Factors affecting economical speed seemed to be dependent on the leg length and gravity (Griffin et al., 1999), however, as Bastien et al. (2005b) discussed, little has been unveiled in the relationship between load carriage and the economical speed. If the rotative torque contributes to the forward propulsion during walking, then the economical speed will also increase during walking with load, in particular, on the upper back. Thus, the second purpose of this study was to examine the effects of load carriage on the economical speed. It was hypothesized that the economical speed would be greater during walking with load on the upper back than carrying on the lower back and/or without load. The economical speed may be estimated by the physical characteristics using the ‘Froude number’ system (Donelan and Kram, 1997). The Froude number system is calculated with leg length, and it is expected that leg length and body height be correlated, suggesting that the body height is expected to correlate to the economical speed. The third purpose of this study was to examine how to estimate the economical speed when the load was carried, on a hypothesis that the body height will be the factor for estimating the economical speed.