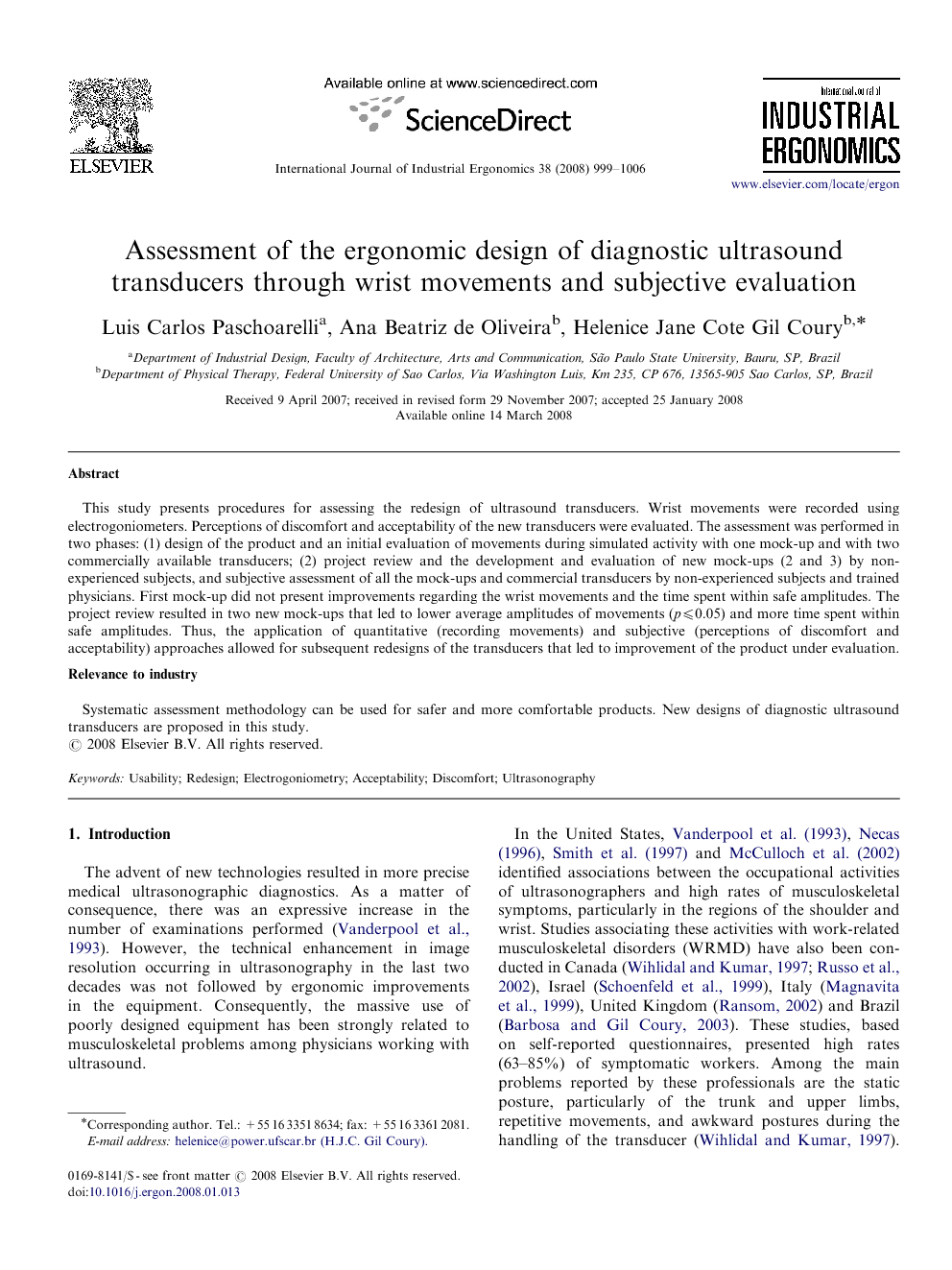 This study presents procedures for assessing the redesign of ultrasound transducers. Wrist movements were recorded using electrogoniometers. Perceptions of discomfort and acceptability of the new transducers were evaluated. The assessment was performed in two phases: (1) design of the product and an initial evaluation of movements during simulated activity with one mock-up and with two commercially available transducers; (2) project review and the development and evaluation of new mock-ups (2 and 3) by non-experienced subjects, and subjective assessment of all the mock-ups and commercial transducers by non-experienced subjects and trained physicians. First mock-up did not present improvements regarding the wrist movements and the time spent within safe amplitudes. The project review resulted in two new mock-ups that led to lower average amplitudes of movements (p⩽0.05) and more time spent within safe amplitudes. Thus, the application of quantitative (recording movements) and subjective (perceptions of discomfort and acceptability) approaches allowed for subsequent redesigns of the transducers that led to improvement of the product under evaluation. Relevance to Industry Systematic assessment methodology can be used for safer and more comfortable products. New designs of diagnostic ultrasound transducers are proposed in this study.

The advent of new technologies resulted in more precise medical ultrasonographic diagnostics. As a matter of consequence, there was an expressive increase in the number of examinations performed (Vanderpool et al., 1993). However, the technical enhancement in image resolution occurring in ultrasonography in the last two decades was not followed by ergonomic improvements in the equipment. Consequently, the massive use of poorly designed equipment has been strongly related to musculoskeletal problems among physicians working with ultrasound. In the United States, Vanderpool et al. (1993), Necas (1996), Smith et al. (1997) and McCulloch et al. (2002) identified associations between the occupational activities of ultrasonographers and high rates of musculoskeletal symptoms, particularly in the regions of the shoulder and wrist. Studies associating these activities with work-related musculoskeletal disorders (WRMD) have also been conducted in Canada (Wihlidal and Kumar, 1997; Russo et al., 2002), Israel (Schoenfeld et al., 1999), Italy (Magnavita et al., 1999), United Kingdom (Ransom, 2002) and Brazil (Barbosa and Gil Coury, 2003). These studies, based on self-reported questionnaires, presented high rates (63–85%) of symptomatic workers. Among the main problems reported by these professionals are the static posture, particularly of the trunk and upper limbs, repetitive movements, and awkward postures during the handling of the transducer (Wihlidal and Kumar, 1997). High average amplitudes of wrist movements (27° of extension) and high repetition rates (22–53 movements/min) have also been measured in ultrasound examinations (Barbosa and Gil Coury, 2004). According to Hedge (1998), better design of manual instruments can minimize extreme postures and maximize neutral postures. According to this author, neutral extension and flexion movements of the wrist are those kept below 15°. For ulnar and radial deviation movements, Palmer et al. (1985) suggested that the functional amplitudes should be 15° and 10°, respectively. For pronation and supination movements, McAtameny and Corlett (1993) proposed ranges up to 45°, i.e. half of the total amplitude (90°). Therefore, wrist movements within these limits might be considered safe and, beyond these limits, they should be considered critical. The ergonomic evaluation of products can also benefit from the analysis of perception parameters (Borg, 1998). Through perception scales, the positive attributes (for example, comfort and acceptability) or negative attributes (for example, discomfort and unacceptability), can be satisfactorily evaluated. The redesign of hand tools aiming at comfort and efficiency has been evaluated through different methods. Objective measurements, such as force (Pävinen and Heinimaa, 2003) and myoelectric activity recordings (Li, 2002) have been successfully used to improve the design of hand tools. Also, subjective measurements as usability tests (Motamedzade et al., 2007) and subjective responses (Li, 2002) have been applied to evaluate redesign interventions. Considering that objective and subjective measurements can provide complementary aspects to maximize the evaluation, the aim of this study was to assess the ergonomic design of ultrasound transducers, by means of electrogoniometric recordings of wrist movements and the perceptions of acceptability and discomfort during simulated breast ultrasound examinations.

The redesigning of a product may require successive stages in order to obtain progressively better results. The present study has shown that the systematic application of methodological procedures for recording and analyzing movements and perceptions during the development phase of a product may provide an important feedback for more effective improvement of the products under development.