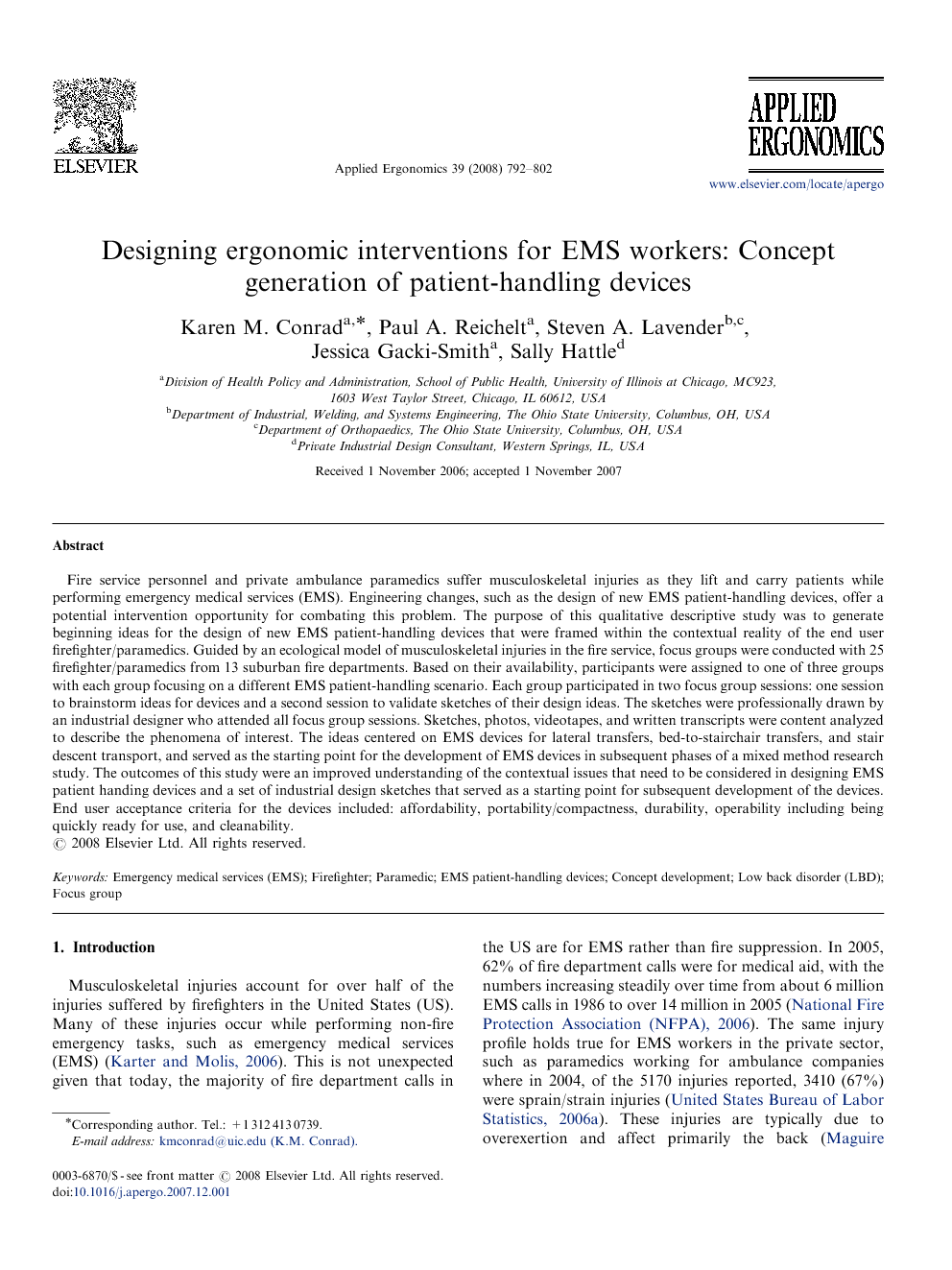 Fire service personnel and private ambulance paramedics suffer musculoskeletal injuries as they lift and carry patients while performing emergency medical services (EMS). Engineering changes, such as the design of new EMS patient-handling devices, offer a potential intervention opportunity for combating this problem. The purpose of this qualitative descriptive study was to generate beginning ideas for the design of new EMS patient-handling devices that were framed within the contextual reality of the end user firefighter/paramedics. Guided by an ecological model of musculoskeletal injuries in the fire service, focus groups were conducted with 25 firefighter/paramedics from 13 suburban fire departments. Based on their availability, participants were assigned to one of three groups with each group focusing on a different EMS patient-handling scenario. Each group participated in two focus group sessions: one session to brainstorm ideas for devices and a second session to validate sketches of their design ideas. The sketches were professionally drawn by an industrial designer who attended all focus group sessions. Sketches, photos, videotapes, and written transcripts were content analyzed to describe the phenomena of interest. The ideas centered on EMS devices for lateral transfers, bed-to-stairchair transfers, and stair descent transport, and served as the starting point for the development of EMS devices in subsequent phases of a mixed method research study. The outcomes of this study were an improved understanding of the contextual issues that need to be considered in designing EMS patient handing devices and a set of industrial design sketches that served as a starting point for subsequent development of the devices. End user acceptance criteria for the devices included: affordability, portability/compactness, durability, operability including being quickly ready for use, and cleanability.

Musculoskeletal injuries account for over half of the injuries suffered by firefighters in the United States (US). Many of these injuries occur while performing non-fire emergency tasks, such as emergency medical services (EMS) (Karter and Molis, 2006). This is not unexpected given that today, the majority of fire department calls in the US are for EMS rather than fire suppression. In 2005, 62% of fire department calls were for medical aid, with the numbers increasing steadily over time from about 6 million EMS calls in 1986 to over 14 million in 2005 (National Fire Protection Association (NFPA), 2006). The same injury profile holds true for EMS workers in the private sector, such as paramedics working for ambulance companies where in 2004, of the 5170 injuries reported, 3410 (67%) were sprain/strain injuries (United States Bureau of Labor Statistics, 2006a). These injuries are typically due to overexertion and affect primarily the back (Maguire et al., 2005; United States Bureau of Labor Statistics, 2006b; Walton et al., 2003). The consequence of these injuries is high worker compensation costs (Theberge et al., 2006; Walton et al., 2003), permanent disability, and premature retirement (Conrad et al., 1994). Although EMS workers do a variety of tasks, the most frequently performed strenuous job tasks entail either lifting and carrying patients down the stairs or performing lateral transfers of patients at the emergency scene and at the hospital (Conrad et al., 2000). Very few researchers have described the physical demands associated specifically with EMS worker job tasks (Doormaal et al., 1995; Furber et al., 1997; Lavender et al., 2000a and Lavender et al., 2000b; Massad et al., 2000). In contrast, there is a large body of research addressing the ergonomic risks associated with patient handling among health care workers, almost all of which has been conducted on nursing personnel (see reviews by Bos et al., 2006; Hignett, 2003; Waters et al., 2006). Like EMS workers, nursing personnel in settings such as hospitals, nursing homes, and home health care perform patient transfers from a bed to a stretcher or gurney and seated transfers, such as from a bed to a chair (Lloyd and Baptiste, 2006; McGill and Kavcic, 2005; Nelson et al., 2003a; Parsons et al., 2006). Unlike other healthcare workers, EMS workers must often transport patients down the stairs. Further, mechanical lifts or hoists (Evanoff et al., 2003; Parsons et al., 2006), patient lift teams, or adjustable beds (Trinkoff et al., 2003) used in institutional healthcare settings are not options for EMS workers. There are several unique aspects of patient handling during the provision of EMS that preclude a ready, direct application of these types of devices or administrative controls used in more controlled environments. EMS workers must function with a limited number of personnel in uncontrolled conditions such as tight, confined spaces and in inclement weather. They require portable patient-handling devices of a size and weight that can easily and quickly be brought to the emergency scene. Affordability is an issue, especially in volunteer fire departments with limited equipment budgets. Given these considerations, compact and affordable patient-handling devices, such as transfer boards and gait belts used in the healthcare setting, are two options that could conceivably be adapted for EMS use. 1.1. Theoretical model This study was guided by a theoretical framework that we developed a number of years ago using focus groups of firefighter/paramedics to elicit their perceptions about the factors that they thought contributed to their musculoskeletal injuries (Conrad et al., 1994). The model posits that situational factors (e.g., the EMS scene such as a confined space, presence of stairs, the patient's medical condition and physical characteristics, the EMS job task), worker factors (e.g., firefighter/paramedic EMS experience and the number of personnel available), and workplace factors (e.g., the EMS patient-handling devices) influence risk of musculoskeletal injury to firefighter/paramedics. 1.2. Purpose The purpose of this qualitative study was to generate initial design ideas for EMS patient-handling devices that were framed within the contextual reality of the end user firefighter/paramedics. This study was the initial phase of a multi-phase mixed methods (Creswell, 2003) research study aimed at creating ergonomic solutions for EMS patient-handling tasks that reduce biomechanical loads and that are viewed by the end users as worthy alternatives to current approaches. More specifically, the information collected in this study was subsequently applied in the following research phases where lab prototype devices were built and biomechanically tested (Lavender et al., 2007a, Lavender et al., 2007b and Lavender et al., 2007c). This study builds upon our earlier research that defined and quantified the postural and biomechanical risks related to EMS patient-handling tasks (Conrad et al., 2000; Lavender et al., 2000a and Lavender et al., 2000b).

Together, firefighter/paramedics, an industrial designer, and university researchers developed a worthy set of initial design ideas for EMS patient-handling devices. The participants articulated clear end user acceptance criteria that should be considered when designing devices if we are to increase the likelihood of their future adoption. The design ideas generated in this focus group study were further developed in subsequent phases of a mixed methods research study.