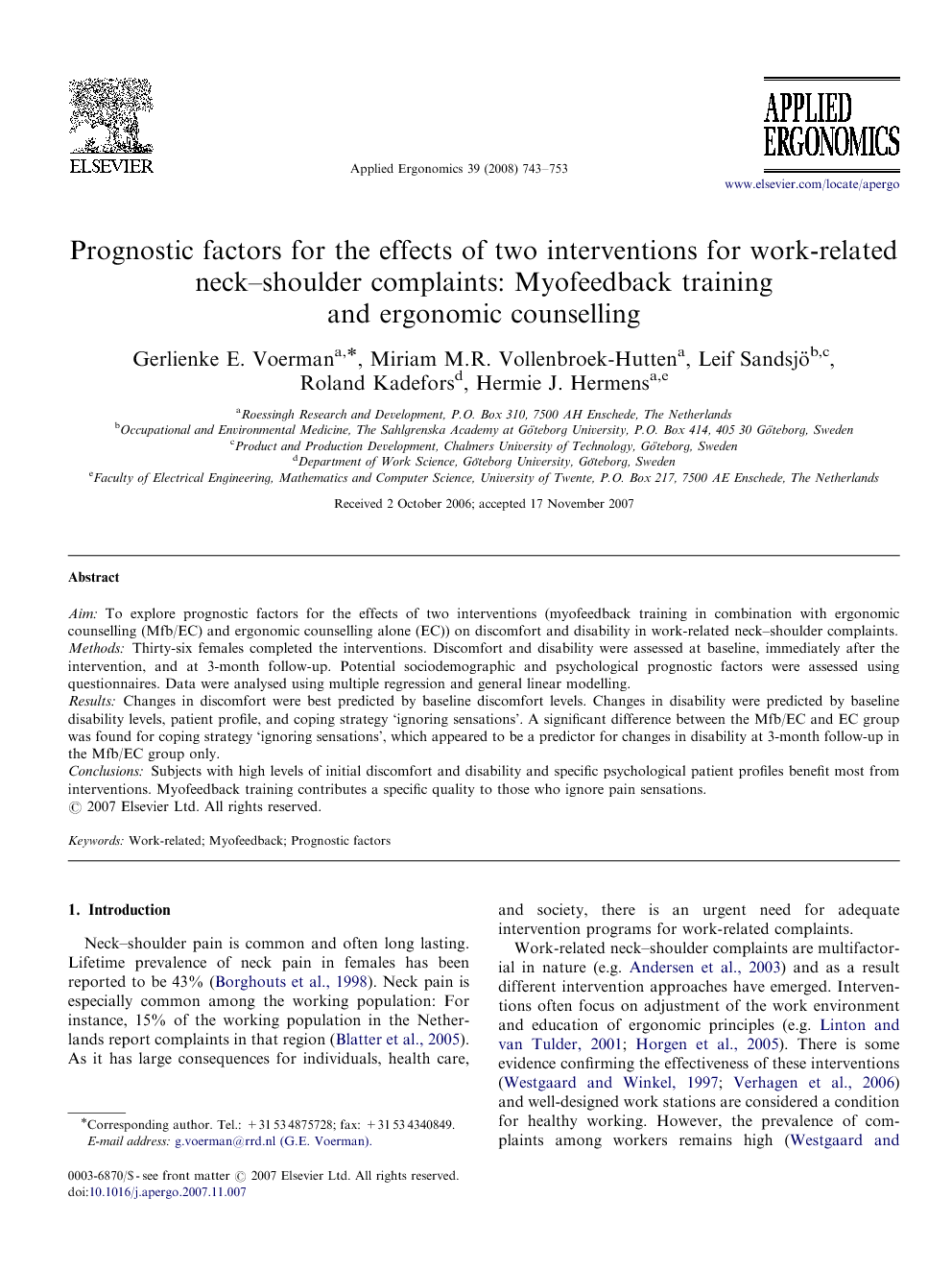 Aim To explore prognostic factors for the effects of two interventions (myofeedback training in combination with ergonomic counselling (Mfb/EC) and ergonomic counselling alone (EC)) on discomfort and disability in work-related neck–shoulder complaints. Methods Thirty-six females completed the interventions. Discomfort and disability were assessed at baseline, immediately after the intervention, and at 3-month follow-up. Potential sociodemographic and psychological prognostic factors were assessed using questionnaires. Data were analysed using multiple regression and general linear modelling. Results Changes in discomfort were best predicted by baseline discomfort levels. Changes in disability were predicted by baseline disability levels, patient profile, and coping strategy ‘ignoring sensations’. A significant difference between the Mfb/EC and EC group was found for coping strategy ‘ignoring sensations’, which appeared to be a predictor for changes in disability at 3-month follow-up in the Mfb/EC group only. Conclusions Subjects with high levels of initial discomfort and disability and specific psychological patient profiles benefit most from interventions. Myofeedback training contributes a specific quality to those who ignore pain sensations.

Neck–shoulder pain is common and often long lasting. Lifetime prevalence of neck pain in females has been reported to be 43% (Borghouts et al., 1998). Neck pain is especially common among the working population: For instance, 15% of the working population in the Netherlands report complaints in that region (Blatter et al., 2005). As it has large consequences for individuals, health care, and society, there is an urgent need for adequate intervention programs for work-related complaints. Work-related neck–shoulder complaints are multifactorial in nature (e.g. Andersen et al., 2003) and as a result different intervention approaches have emerged. Interventions often focus on adjustment of the work environment and education of ergonomic principles (e.g. Linton and van Tulder, 2001; Horgen et al., 2005). There is some evidence confirming the effectiveness of these interventions (Westgaard and Winkel, 1997; Verhagen et al., 2006) and well-designed work stations are considered a condition for healthy working. However, the prevalence of complaints among workers remains high (Westgaard and Winkel, 1997), so there is a need for developing new interventions. A relatively new intervention approach is the myofeedback training based on the Cinderella hypothesis of Hägg (1991). During this intervention (Hermens and Hutten, 2002), subjects wear a garment enabling continuous recording of upper trapezius muscle activation patterns. In contrast to classical feedback during which subjects receive feedback when muscle activation is too high, Cinderella-based myofeedback provides feedback when relaxation is insufficient. The feedback can make subjects aware of this insufficient relaxation and contribute to improve time spent in relaxation, which might result in a reduction of complaints. As interventions focusing on multiple factors have shown to be related to a decreased incidence of complaints (Lincoln et al., 2000), 4 weeks of Cinderella-based myofeedback training was combined with ergonomic counselling and showed clinically relevant improvements in about 50% of the subjects (Hermens and Hutten, 2002; Voerman et al., 2007). This suggests the presence of subgroups in which the intervention is beneficial, a common finding when evaluating the effectiveness of pain programs. Identification of prognostic factors, factors that have predictive value regarding outcome of specific therapies, facilitates clinical decisions concerning the choice of interventions and the referral of subjects to appropriate intervention programs. The search for prognostic factors has mainly focused on low back pain programs. The factors appear to cover the whole spectrum of the biopsychosocial model of pain and disability of Waddell (1998) (e.g. Elkayam et al., 1996; Hasenbring et al., 1994; Bot et al., 2005). van der Hulst et al. (2005) classified the factors into either sociodemographic, physical, or psychological and concluded that the prognostic value of the physical factors is superimposed by the sociodemographic and psychological factors when considering the effect of multidisciplinary treatment in chronic low back pain (van der Hulst et al., 2005). In only a few studies prognostic factors for neck and/or shoulder pain have been investigated, showing that discomfort, duration and history of symptoms, disability, age, and well-being are related to outcome, (Croft et al., 1996; Hoving et al., 2004). The relation between these factors and outcome, however, appeared to be inconsistent (Borghouts et al., 1998) and the studies predominantly focused on prognostic factors for the clinical course of neck pain rather than for interventions. This information would however be useful for optimizing clinical decisions regarding the allocation of interventions. The present study is an attempt to explore prognostic factors for the effect of interventions for work-related neck–shoulder complaints. Two interventions are considered in this perspective, i.e. Cinderella-based ambulant myofeedback training combined with ergonomic counselling (Mfb/EC) and ergonomic counselling only (EC). Outcome is defined in terms of discomfort and disability immediately after the interventions and at 3-month follow-up and prognostic factors for outcome were compared between the two interventions. As literature has shown that the physical factors have less predictive value, only sociodemographic and psychological factors were evaluated.

Subjects with high levels of initial discomfort and disability and specific psychological patient profiles benefit most from interventions. Myofeedback training contributes a specific quality to those who ignore pain sensations. This study explored prognostic factors for the effect of interventions for work-related neck–shoulder complaints in terms of discomfort and disability immediately after the intervention and at 3-month follow-up. In addition, a comparison was made between prognostic factors for two interventions.