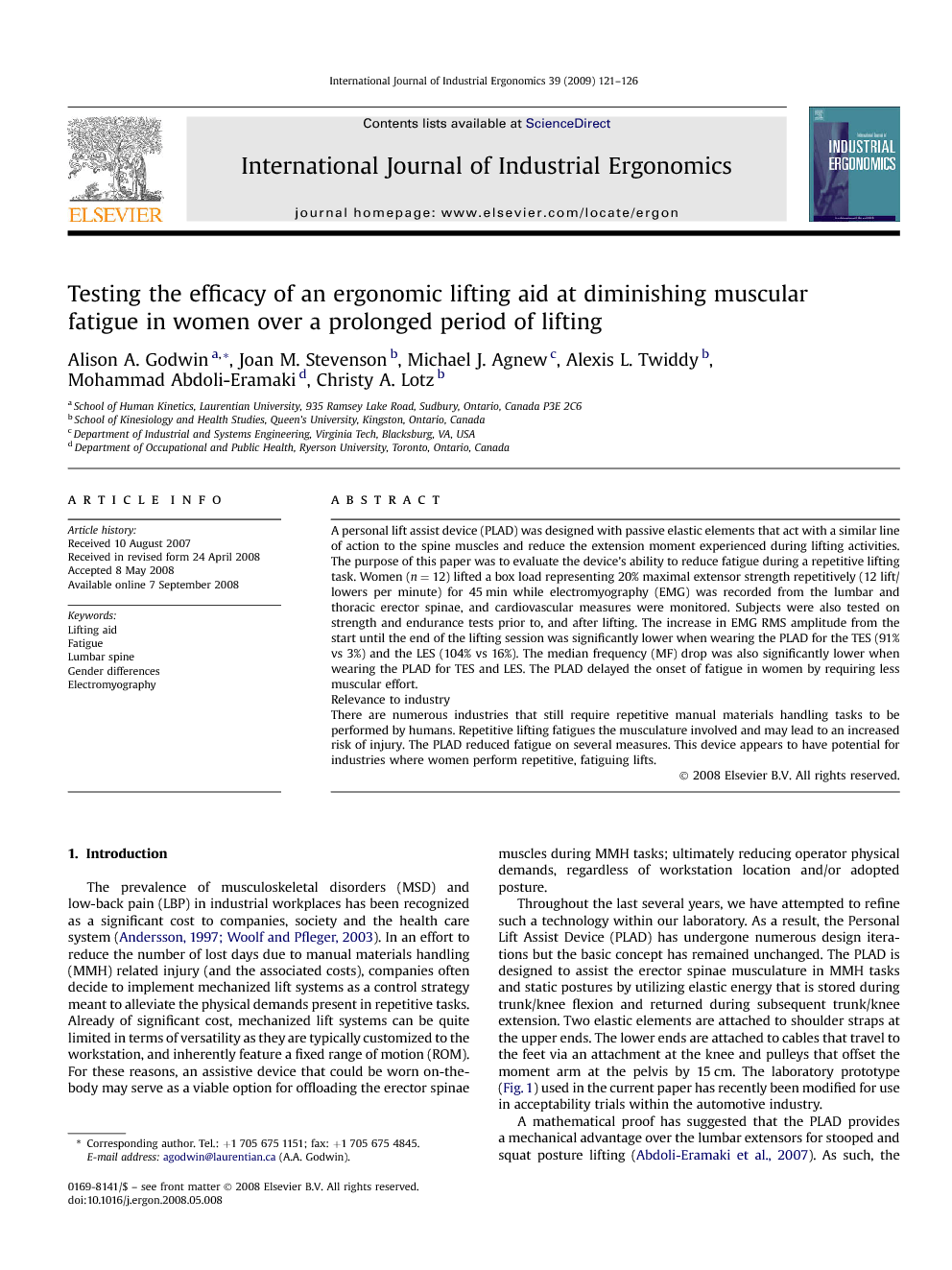 A personal lift assist device (PLAD) was designed with passive elastic elements that act with a similar line of action to the spine muscles and reduce the extension moment experienced during lifting activities. The purpose of this paper was to evaluate the device's ability to reduce fatigue during a repetitive lifting task. Women (n = 12) lifted a box load representing 20% maximal extensor strength repetitively (12 lift/lowers per minute) for 45 min while electromyography (EMG) was recorded from the lumbar and thoracic erector spinae, and cardiovascular measures were monitored. Subjects were also tested on strength and endurance tests prior to, and after lifting. The increase in EMG RMS amplitude from the start until the end of the lifting session was significantly lower when wearing the PLAD for the TES (91% vs 3%) and the LES (104% vs 16%). The median frequency (MF) drop was also significantly lower when wearing the PLAD for TES and LES. The PLAD delayed the onset of fatigue in women by requiring less muscular effort. Relevance to industry There are numerous industries that still require repetitive manual materials handling tasks to be performed by humans. Repetitive lifting fatigues the musculature involved and may lead to an increased risk of injury. The PLAD reduced fatigue on several measures. This device appears to have potential for industries where women perform repetitive, fatiguing lifts.

The prevalence of musculoskeletal disorders (MSD) and low-back pain (LBP) in industrial workplaces has been recognized as a significant cost to companies, society and the health care system (Andersson, 1997 and Woolf and Pfleger, 2003). In an effort to reduce the number of lost days due to manual materials handling (MMH) related injury (and the associated costs), companies often decide to implement mechanized lift systems as a control strategy meant to alleviate the physical demands present in repetitive tasks. Already of significant cost, mechanized lift systems can be quite limited in terms of versatility as they are typically customized to the workstation, and inherently feature a fixed range of motion (ROM). For these reasons, an assistive device that could be worn on-the-body may serve as a viable option for offloading the erector spinae muscles during MMH tasks; ultimately reducing operator physical demands, regardless of workstation location and/or adopted posture. Throughout the last several years, we have attempted to refine such a technology within our laboratory. As a result, the Personal Lift Assist Device (PLAD) has undergone numerous design iterations but the basic concept has remained unchanged. The PLAD is designed to assist the erector spinae musculature in MMH tasks and static postures by utilizing elastic energy that is stored during trunk/knee flexion and returned during subsequent trunk/knee extension. Two elastic elements are attached to shoulder straps at the upper ends. The lower ends are attached to cables that travel to the feet via an attachment at the knee and pulleys that offset the moment arm at the pelvis by 15 cm. The laboratory prototype (Fig. 1) used in the current paper has recently been modified for use in acceptability trials within the automotive industry.