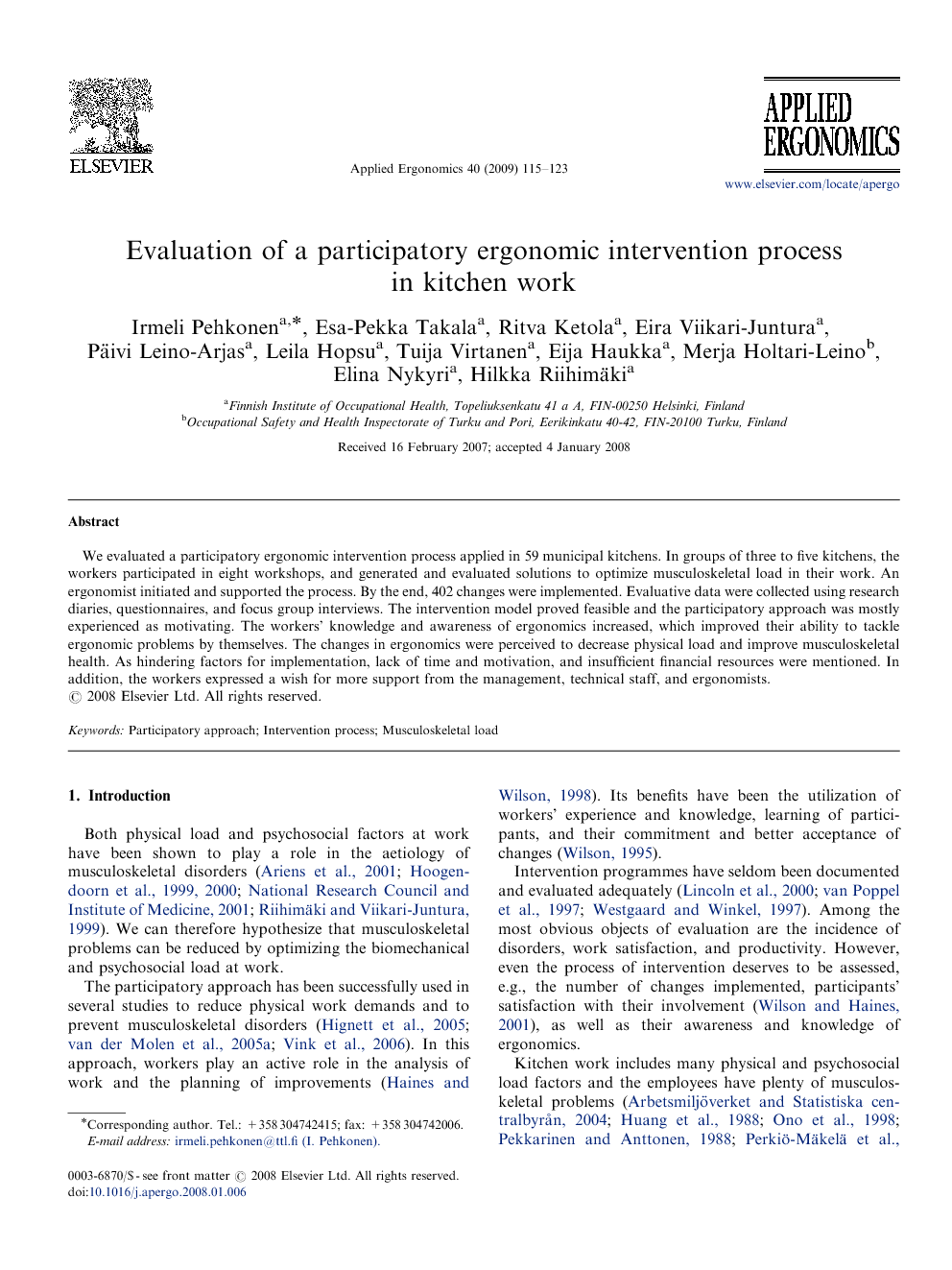 We evaluated a participatory ergonomic intervention process applied in 59 municipal kitchens. In groups of three to five kitchens, the workers participated in eight workshops, and generated and evaluated solutions to optimize musculoskeletal load in their work. An ergonomist initiated and supported the process. By the end, 402 changes were implemented. Evaluative data were collected using research diaries, questionnaires, and focus group interviews. The intervention model proved feasible and the participatory approach was mostly experienced as motivating. The workers’ knowledge and awareness of ergonomics increased, which improved their ability to tackle ergonomic problems by themselves. The changes in ergonomics were perceived to decrease physical load and improve musculoskeletal health. As hindering factors for implementation, lack of time and motivation, and insufficient financial resources were mentioned. In addition, the workers expressed a wish for more support from the management, technical staff, and ergonomists.

Both physical load and psychosocial factors at work have been shown to play a role in the aetiology of musculoskeletal disorders (Ariens et al., 2001; Hoogendoorn et al., 1999 and Hoogendoorn et al., 2000; National Research Council and Institute of Medicine, 2001; Riihimäki and Viikari-Juntura, 1999). We can therefore hypothesize that musculoskeletal problems can be reduced by optimizing the biomechanical and psychosocial load at work. The participatory approach has been successfully used in several studies to reduce physical work demands and to prevent musculoskeletal disorders (Hignett et al., 2005; van der Molen et al., 2005a; Vink et al., 2006). In this approach, workers play an active role in the analysis of work and the planning of improvements (Haines and Wilson, 1998). Its benefits have been the utilization of workers’ experience and knowledge, learning of participants, and their commitment and better acceptance of changes (Wilson, 1995). Intervention programmes have seldom been documented and evaluated adequately (Lincoln et al., 2000; van Poppel et al., 1997; Westgaard and Winkel, 1997). Among the most obvious objects of evaluation are the incidence of disorders, work satisfaction, and productivity. However, even the process of intervention deserves to be assessed, e.g., the number of changes implemented, participants’ satisfaction with their involvement (Wilson and Haines, 2001), as well as their awareness and knowledge of ergonomics. Kitchen work includes many physical and psychosocial load factors and the employees have plenty of musculoskeletal problems (Arbetsmiljöverket and Statistiska centralbyrån, 2004; Huang et al., 1988; Ono et al., 1998; Pekkarinen and Anttonen, 1988; Perkiö-Mäkelä et al., 2006; Shibata et al., 1991). This study is part of a randomized controlled trial aimed at reducing the occurrence of musculoskeletal disorders. The aims of the intervention were to increase workers’ knowledge and awareness regarding ergonomics of their work, to encourage workers to be active participants in developing ergonomics, and to implement improvements in kitchen ergonomics. This article describes the intervention process and evaluates its feasibility with regard to the elements of the intervention process, and available resources and support. We also report the effects of the intervention on ergonomic knowledge and awareness, and the workers’ expectations and perceived effects of the intervention on workload and musculoskeletal health. The efficacy of the intervention will be reported elsewhere.