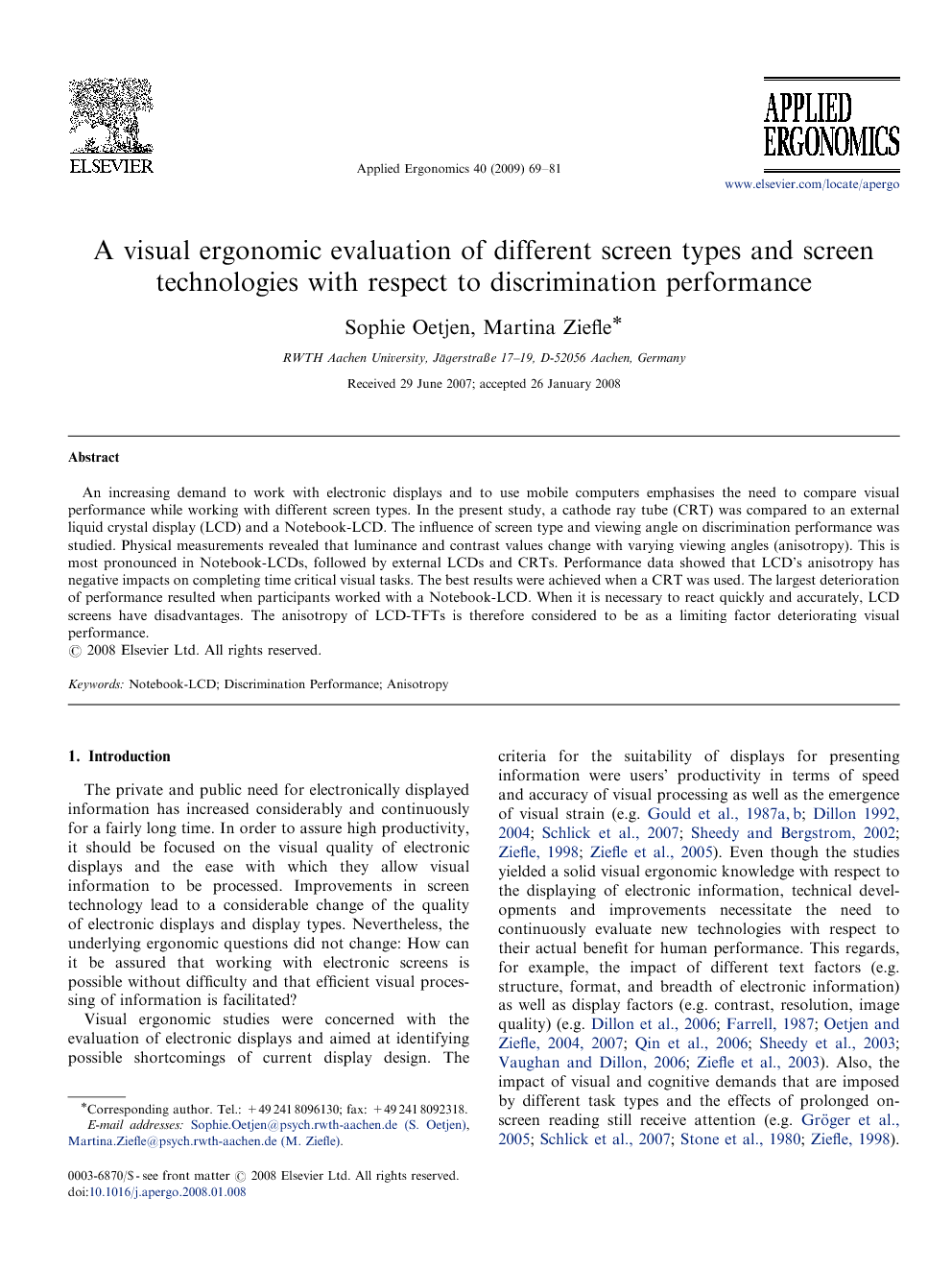 An increasing demand to work with electronic displays and to use mobile computers emphasises the need to compare visual performance while working with different screen types. In the present study, a cathode ray tube (CRT) was compared to an external liquid crystal display (LCD) and a Notebook-LCD. The influence of screen type and viewing angle on discrimination performance was studied. Physical measurements revealed that luminance and contrast values change with varying viewing angles (anisotropy). This is most pronounced in Notebook-LCDs, followed by external LCDs and CRTs. Performance data showed that LCD's anisotropy has negative impacts on completing time critical visual tasks. The best results were achieved when a CRT was used. The largest deterioration of performance resulted when participants worked with a Notebook-LCD. When it is necessary to react quickly and accurately, LCD screens have disadvantages. The anisotropy of LCD-TFTs is therefore considered to be as a limiting factor deteriorating visual performance.

The private and public need for electronically displayed information has increased considerably and continuously for a fairly long time. In order to assure high productivity, it should be focused on the visual quality of electronic displays and the ease with which they allow visual information to be processed. Improvements in screen technology lead to a considerable change of the quality of electronic displays and display types. Nevertheless, the underlying ergonomic questions did not change: How can it be assured that working with electronic screens is possible without difficulty and that efficient visual processing of information is facilitated? Visual ergonomic studies were concerned with the evaluation of electronic displays and aimed at identifying possible shortcomings of current display design. The criteria for the suitability of displays for presenting information were users’ productivity in terms of speed and accuracy of visual processing as well as the emergence of visual strain (e.g. Gould et al., 1987a and Gould et al., 1987b; Dillon, 1992 and Dillon, 2004; Schlick et al., 2007; Sheedy and Bergstrom, 2002; Ziefle, 1998; Ziefle et al., 2005). Even though the studies yielded a solid visual ergonomic knowledge with respect to the displaying of electronic information, technical developments and improvements necessitate the need to continuously evaluate new technologies with respect to their actual benefit for human performance. This regards, for example, the impact of different text factors (e.g. structure, format, and breadth of electronic information) as well as display factors (e.g. contrast, resolution, image quality) (e.g. Dillon et al., 2006; Farrell, 1987; Oetjen and Ziefle, 2004 and Oetjen and Ziefle, 2007; Qin et al., 2006; Sheedy et al., 2003; Vaughan and Dillon, 2006; Ziefle et al., 2003). Also, the impact of visual and cognitive demands that are imposed by different task types and the effects of prolonged on-screen reading still receive attention (e.g. Gröger et al., 2005; Schlick et al., 2007; Stone et al., 1980; Ziefle, 1998). Another prominent research issue refers to the question, which screen type benefits or disadvantages visual performance. The comparison of different display types received special attention lately as screen technology changed. While a few years ago, the cathode ray tube (CRT) was the state-of-the-art technology and was excessively studied (Schlick et al., 2007), the liquid crystal displays (LCDs) are replacing CRTs more and more. LCDs with thin film transistor technique (LCD-TFTs) seem to overcome many disadvantages of the CRTs. Beyond others, the most significant advantage is their suitability for mobile devices. For this reason, they are not only used in small screen devices like digital cameras and mobile phones, but also play an important role in computer notebooks. Notebook computers are continuously replacing stationary desktop computers and should be focused in the ergonomic evaluation of electronic displays (Kirsch, 2004). Although distribution and purchase rates of notebook computers are increasing (BITKOM, 2007), to our knowledge no visual ergonomic study was concerned with the visual quality of Notebook-LCDs so far. Whenever notebooks are considered in ergonomic studies, mostly the specificity of hardware components (e.g. input devices, Sutter and Ziefle 2005; Armbrüster et al., 2007) or the specificity of users’ sitting posture and characteristics of work places received attention (e.g. Harbison and Forrester, 1995; Saito et al., 2000). As the trend is heading towards a steady increase in mobility, there is a considerable need to learn about the suitability of the visual conditions that are present in Notebook-LCDs. This is the topic of the present study. To achieve valuable results, a two-step procedure was realised: the first step was to physically measure the visual quality of different screen types and screen technologies. To do so, a standardised measurement procedure was applied that allows the objective, replicable and reliable comparison of the physical features of different screen types. The second step in the analysis of the suitability of Notebook-LCDs was to determine the visual discrimination performance of normal screen users. Here three screen types were compared: the screen of a Notebook-PC, an external LCD and a CRT.