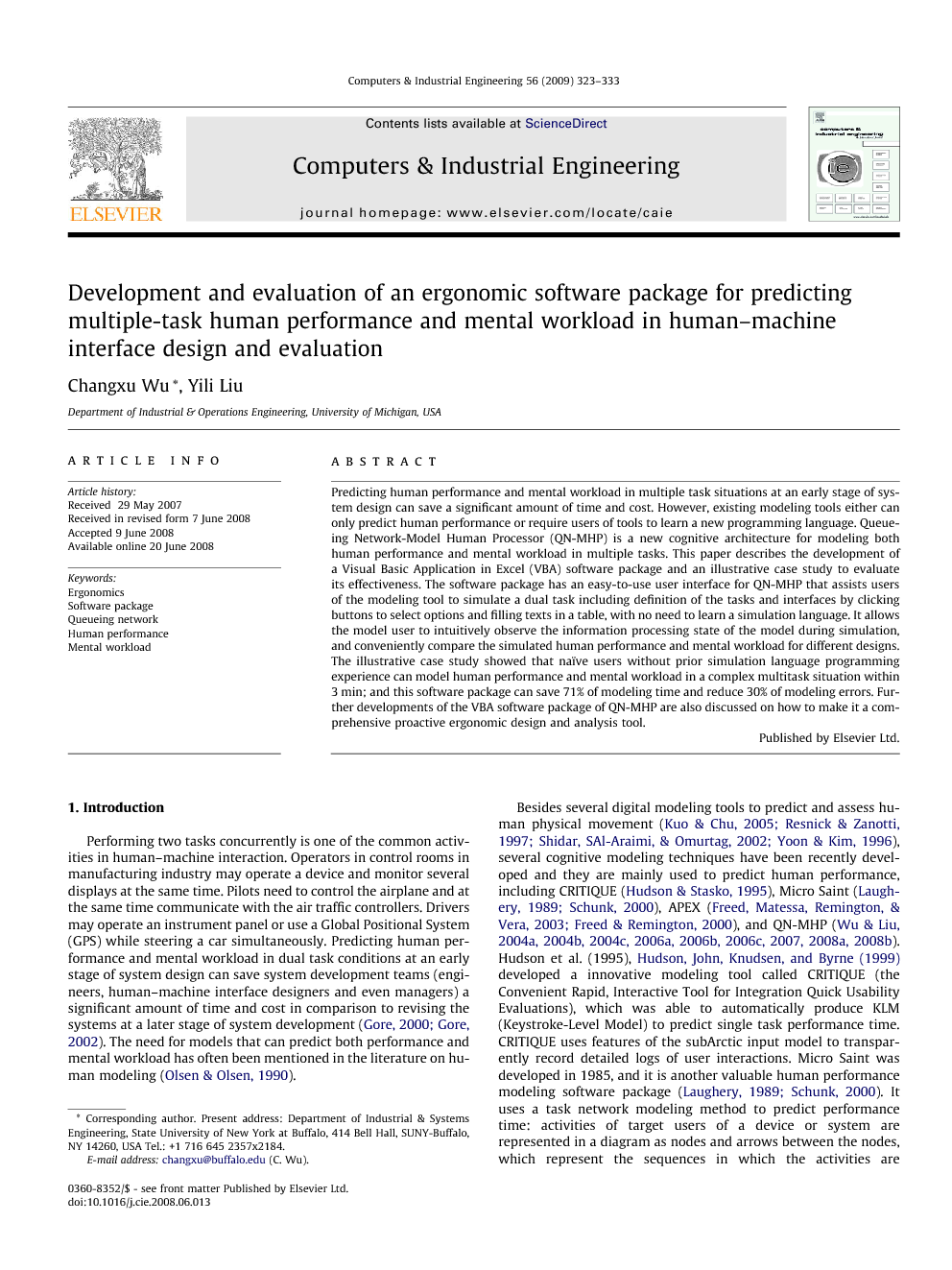 Predicting human performance and mental workload in multiple task situations at an early stage of system design can save a significant amount of time and cost. However, existing modeling tools either can only predict human performance or require users of tools to learn a new programming language. Queueing Network-Model Human Processor (QN-MHP) is a new cognitive architecture for modeling both human performance and mental workload in multiple tasks. This paper describes the development of a Visual Basic Application in Excel (VBA) software package and an illustrative case study to evaluate its effectiveness. The software package has an easy-to-use user interface for QN-MHP that assists users of the modeling tool to simulate a dual task including definition of the tasks and interfaces by clicking buttons to select options and filling texts in a table, with no need to learn a simulation language. It allows the model user to intuitively observe the information processing state of the model during simulation, and conveniently compare the simulated human performance and mental workload for different designs. The illustrative case study showed that naïve users without prior simulation language programming experience can model human performance and mental workload in a complex multitask situation within 3 min; and this software package can save 71% of modeling time and reduce 30% of modeling errors. Further developments of the VBA software package of QN-MHP are also discussed on how to make it a comprehensive proactive ergonomic design and analysis tool.

Performing two tasks concurrently is one of the common activities in human–machine interaction. Operators in control rooms in manufacturing industry may operate a device and monitor several displays at the same time. Pilots need to control the airplane and at the same time communicate with the air traffic controllers. Drivers may operate an instrument panel or use a Global Positional System (GPS) while steering a car simultaneously. Predicting human performance and mental workload in dual task conditions at an early stage of system design can save system development teams (engineers, human–machine interface designers and even managers) a significant amount of time and cost in comparison to revising the systems at a later stage of system development (Gore, 2000 and Gore, 2002). The need for models that can predict both performance and mental workload has often been mentioned in the literature on human modeling (Olsen & Olsen, 1990). Besides several digital modeling tools to predict and assess human physical movement (Kuo and Chu, 2005, Resnick and Zanotti, 1997, Shidar et al., 2002 and Yoon and Kim, 1996), several cognitive modeling techniques have been recently developed and they are mainly used to predict human performance, including CRITIQUE (Hudson & Stasko, 1995), Micro Saint (Laughery, 1989 and Schunk, 2000), APEX (Freed et al., 2003 and Freed and Remington, 2000), and QN-MHP (Wu and Liu, 2004a, Wu and Liu, 2004b, Wu and Liu, 2004c, Wu and Liu, 2006a, Wu and Liu, 2006b, Wu and Liu, 2006c, Wu and Liu, 2007, Wu and Liu, 2008a and Wu and Liu, 2008b). Hudson et al. (1995), Hudson, John, Knudsen, and Byrne (1999) developed a innovative modeling tool called CRITIQUE (the Convenient Rapid, Interactive Tool for Integration Quick Usability Evaluations), which was able to automatically produce KLM (Keystroke-Level Model) to predict single task performance time. CRITIQUE uses features of the subArctic input model to transparently record detailed logs of user interactions. Micro Saint was developed in 1985, and it is another valuable human performance modeling software package (Laughery, 1989 and Schunk, 2000). It uses a task network modeling method to predict performance time: activities of target users of a device or system are represented in a diagram as nodes and arrows between the nodes, which represent the sequences in which the activities are performed. Researchers in the NASA Ames Research Center (e.g., Freed & Remington, 2000) developed a useful modeling tool called APEX – a GOMS (Goal-Operator Methods-Selection)-like framework that incorporates mechanisms and methodologies for predicting certain forms of human error. Queueing network modeling approach has been established both as a psychological theory and a human performance modeling technique in human–computer interaction. In modeling human performance, computational models based on queueing networks have successfully integrated a large number of mathematical models in response time (Liu, 1996) and in multitask performance (Liu, 1997) as special cases of queueing networks. A simulation model of a queueing network mental architecture, called the Queueing Network-Model Human Processor (QN-MHP), has been developed to represent information processing in the mental system as a queueing network on the basis of neuroscience and psychological findings. Ample research evidence has shown that major brain areas with certain information processing functions are localized and connected with each other via neural pathways (Bear et al., 2001, Faw, 2003, Roland, 1993 and Smith and Jonides, 1998), which is highly similar to a queueing network of servers that can process entities traveling through the routes serially or/and in parallel depending on specific network arrangements. Therefore, brain regions with similar functions can be regarded as servers and neural pathways connecting them are treated as routes in the queueing network (see Fig. 1 and Fig. 2). Information being processed in the network is represented by entities traveling network.QN-MHP has been successfully used to generate human behavior in real time, including simple and choice reaction time (Feyen, 2002), transcription typing (Wu and Liu, 2004a, Wu and Liu, 2004b and Wu and Liu, 2008a), psychological refractory period (Wu and Liu, 2004c and Wu and Liu, 2008b), physiological index of mental workload in visual-manual tracking (Wu and Liu, 2006a and Wu et al., 2008), subjective index of mental workload in driving (Wu and Liu, 2006b, Wu and Liu, 2006c, Wu and Liu, 2007 and Wu et al., in press), and driver performance (Liu, Feyen, & Tsimhoni, 2006). One of the most important advantages of QN-MHP in modeling multiple tasks is that: multitask performance emerges as the behavior of multiple streams of information (represented by entities in the queueing network) flowing through a network, with no need to devise complex, task specific procedures to either interleave production rules into a serial program or for an executive process to interactively control task processes (Liu et al., 2006). Similar to the other modeling tools, however, users of the current version of QN-MHP (called QN-MHP 2.0) need to learn a manufacturing simulation language – Promodel, with which QN-MHP is currently implemented. Table 1 summarizes the functions and ease of use of the existing modeling tools introduced above. This review of the major existing tools clearly indicates that there is a need to develop an easy-to-use software tool for modeling human performance and mental workload in multitask situations, especially for users (engineers, interface designers and even managers) who do not have prior programming experience. In the following sections of this article, we describe the VBA software package of QN-MHP 2.0 as a new modeling tool for users who do not have prior simulation programming language experience, including its detailed software architecture as well as information transmission between the tool and the original Promodel file. In addition, we also describe a case study to illustrate the effectiveness of the software package in reducing the amount of time and errors in task modeling and in enhancing users’ subjective evaluation.

This paper describes the development of VBA software package with an easy-to-use user interface for QN-MHP 2.0 which is able to help users of the modeling tool define the tasks and interfaces in multitask systems easily by clicking and typing rather than learning a new programming language to code this information. The experimental results in the case study indicate that using this software package significantly reduced the modeling time and errors of the users in simulating human performance and mental workload in multitask situations. Users of the new software package do not need to learn any new programming language to model multiple tasks. They only need to design the UI mock-ups in a graphic format, store them as images in the computer, and then choose the corresponding actions/operators to demonstrate the task in the VBA software package by clicking and typing, decreasing their working memory load in translating the operators/actions into numerical codes and reducing their errors in manually inputting the codes in Excel file as well as in coding the Promodel file. The current experimental study found that after a 10-min brief introduction of the software, the naïve users who have never used this modeling tool before can model human performance and mental workload in a complex multitask situation within 3 min. The efficiency and ease of use in modeling the task via this new software package is also confirmed by high subjective evaluation scores after usage (We also checked the order effect – subjects who used the VBA package first vs. subjects who used the original package without the VBA package first, and found no significant difference in performance and subjective evaluation between these two groups). In addition, the new software package of QN-MHP is developed using VBA – a widespread UI rapid design tool which makes further development of the interface easier and more compatible with other commonly used software development tools. The current work demonstrates the value of the easy-to-use modeling tool of QN-MHP, and we are exploring several important further developments for the current modeling tool. It is promising to connect the Visual Basic Application with other Microsoft Office software and web design tools. Most of the commonly used software developed by Microsoft® Cooperation is able to use Visual Basic as well as its applications including Microsoft Visual Studio Family (Visual Basic.net, Visual C++.net, Visual J#.net, Visual C#.net), Microsoft Word, PowerPoint, Excel, Access, Outlook and more importantly FrontPage. For example, once users of the modeling tool create their web pages in FrontPage, a VBA program can automatically transfer the users’ behavior and web pages into VBA user interface of QN-MHP so that users of the modeling tool can directly demonstrate the task in the FrontPage. Another important aspect of the software currently being developed is the state-transition diagram, where the state of objects on the user interface is a node and the actions defined by users are the transitions between the nodes. In addition, we are adding additional features on the VBA software package so that users of the tool are able to conveniently define the properties of target users of the UI mock-ups (e.g., age, perceptual motor speed, mental operation speed, handedness) as well as the conditions of the target environment where the UI mock-ups are used (e.g., lighting condition, noise level, vibration level etc.). Finally, a related research work is being conducted to connect the QN-MHP with the human motion models including JACK and 3DSSPP/AutoCAD (Feyen et al., 2000 and Reed and Tsimhoni, 2006). These developments will further enhance the capabilities of the combined models to make comprehensive predictions of human performance, human movement, mental and physical workload. We are developing the modeling tool to make the human performance and mental workload modeling easier for engineers, user interface designers and even managers, so that they can efficiently compare and improve system prototypes at an early stage of system development. Our comprehensive computational model of human performance – QN-MHP, offers not only theoretical insights to human performance and mental workload, but is a step toward a comprehensive proactive ergonomic design and analysis tool for user interface design.