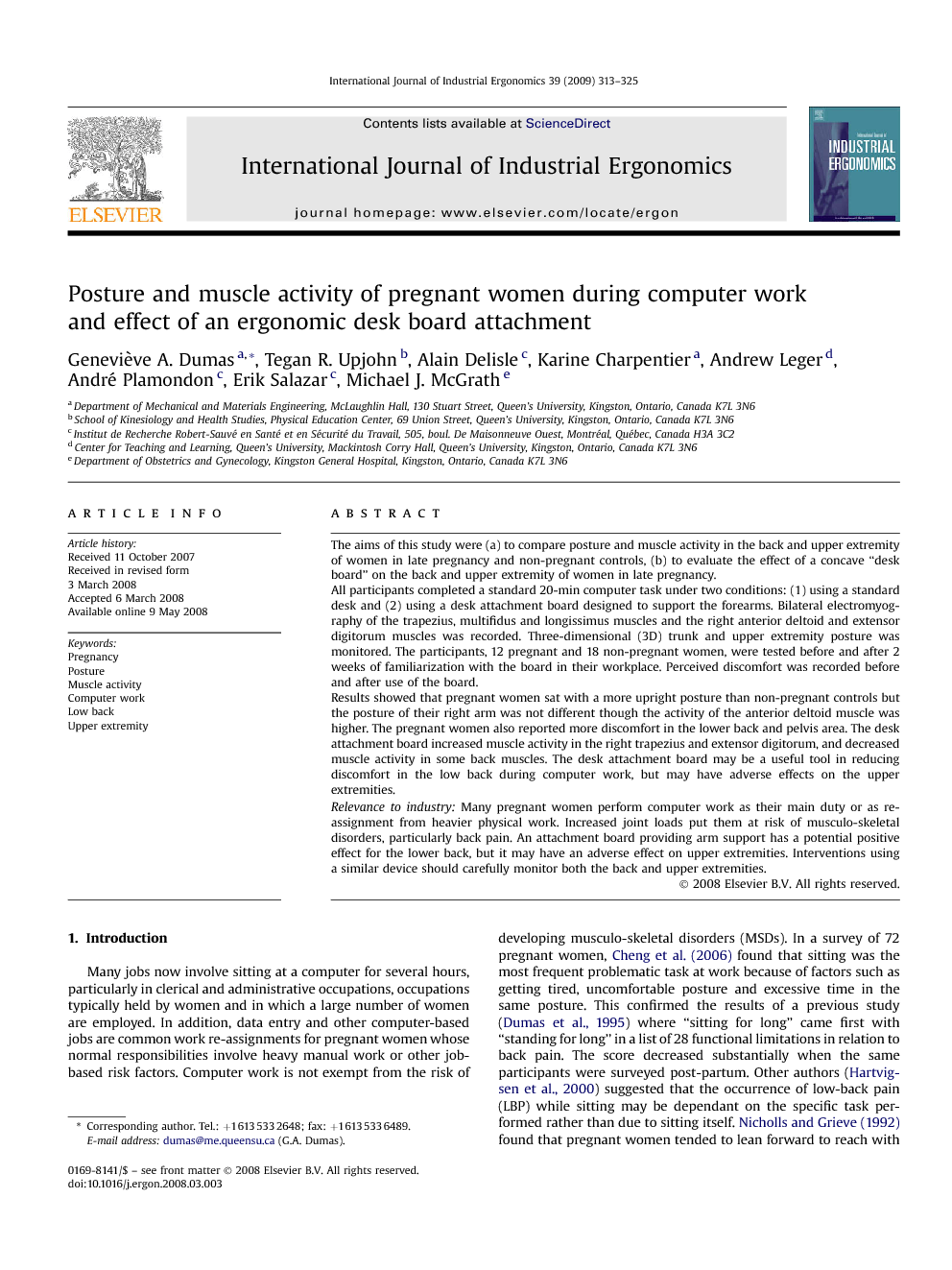 The aims of this study were (a) to compare posture and muscle activity in the back and upper extremity of women in late pregnancy and non-pregnant controls, (b) to evaluate the effect of a concave “desk board” on the back and upper extremity of women in late pregnancy. All participants completed a standard 20-min computer task under two conditions: (1) using a standard desk and (2) using a desk attachment board designed to support the forearms. Bilateral electromyography of the trapezius, multifidus and longissimus muscles and the right anterior deltoid and extensor digitorum muscles was recorded. Three-dimensional (3D) trunk and upper extremity posture was monitored. The participants, 12 pregnant and 18 non-pregnant women, were tested before and after 2 weeks of familiarization with the board in their workplace. Perceived discomfort was recorded before and after use of the board. Results showed that pregnant women sat with a more upright posture than non-pregnant controls but the posture of their right arm was not different though the activity of the anterior deltoid muscle was higher. The pregnant women also reported more discomfort in the lower back and pelvis area. The desk attachment board increased muscle activity in the right trapezius and extensor digitorum, and decreased muscle activity in some back muscles. The desk attachment board may be a useful tool in reducing discomfort in the low back during computer work, but may have adverse effects on the upper extremities. Relevance to industry Many pregnant women perform computer work as their main duty or as re-assignment from heavier physical work. Increased joint loads put them at risk of musculo-skeletal disorders, particularly back pain. An attachment board providing arm support has a potential positive effect for the lower back, but it may have an adverse effect on upper extremities. Interventions using a similar device should carefully monitor both the back and upper extremities.

In this study it was found that during computer work, pregnant women sat with a more upright posture than non-pregnant controls but the posture of their right arm was not different, an unexpected result that is not supported by the literature. The muscle activity of the anterior deltoid muscle was higher for the pregnant group than for the control group. The pregnant women also reported more discomfort in the lower back and pelvis area. The ergonomic board tested in the study did not affect trunk or neck posture, but decreased muscle activity in some back muscles. However, its effect on the upper extremity was less desirable as it caused an increase in wrist extension, elbow flexion and shoulder abduction, and also required increased muscle activity in the extensor digitorum and right trapezius muscles.