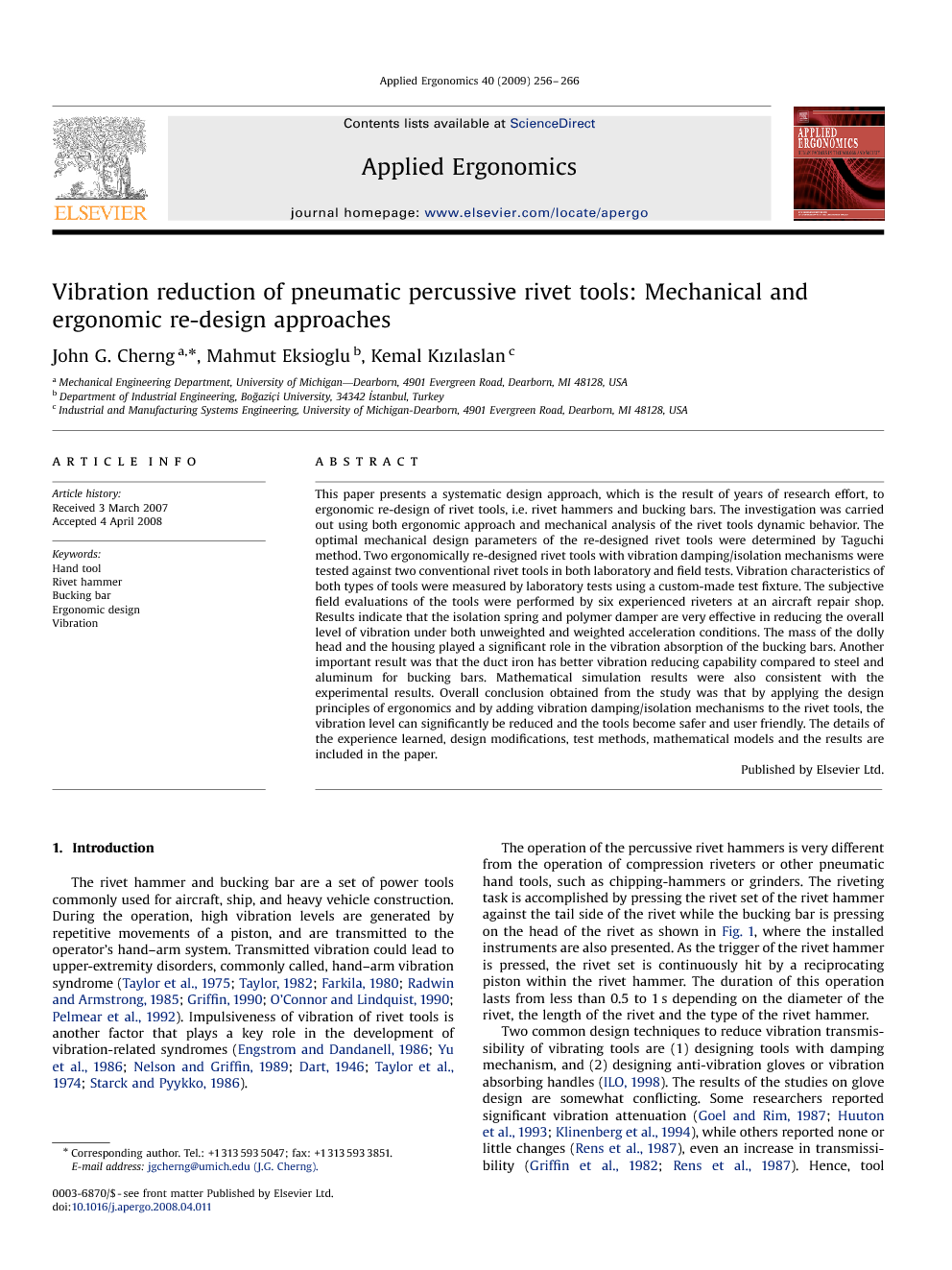 This paper presents a systematic design approach, which is the result of years of research effort, to ergonomic re-design of rivet tools, i.e. rivet hammers and bucking bars. The investigation was carried out using both ergonomic approach and mechanical analysis of the rivet tools dynamic behavior. The optimal mechanical design parameters of the re-designed rivet tools were determined by Taguchi method. Two ergonomically re-designed rivet tools with vibration damping/isolation mechanisms were tested against two conventional rivet tools in both laboratory and field tests. Vibration characteristics of both types of tools were measured by laboratory tests using a custom-made test fixture. The subjective field evaluations of the tools were performed by six experienced riveters at an aircraft repair shop. Results indicate that the isolation spring and polymer damper are very effective in reducing the overall level of vibration under both unweighted and weighted acceleration conditions. The mass of the dolly head and the housing played a significant role in the vibration absorption of the bucking bars. Another important result was that the duct iron has better vibration reducing capability compared to steel and aluminum for bucking bars. Mathematical simulation results were also consistent with the experimental results. Overall conclusion obtained from the study was that by applying the design principles of ergonomics and by adding vibration damping/isolation mechanisms to the rivet tools, the vibration level can significantly be reduced and the tools become safer and user friendly. The details of the experience learned, design modifications, test methods, mathematical models and the results are included in the paper.

The rivet hammer and bucking bar are a set of power tools commonly used for aircraft, ship, and heavy vehicle construction. During the operation, high vibration levels are generated by repetitive movements of a piston, and are transmitted to the operator's hand–arm system. Transmitted vibration could lead to upper-extremity disorders, commonly called, hand–arm vibration syndrome (Taylor et al., 1975; Taylor, 1982; Farkila, 1980; Radwin and Armstrong, 1985; Griffin, 1990; O’Connor and Lindquist, 1990; Pelmear et al., 1992). Impulsiveness of vibration of rivet tools is another factor that plays a key role in the development of vibration-related syndromes (Engstrom and Dandanell, 1986; Yu et al., 1986; Nelson and Griffin, 1989; Dart, 1946; Taylor et al., 1974; Starck and Pyykko, 1986). The operation of the percussive rivet hammers is very different from the operation of compression riveters or other pneumatic hand tools, such as chipping-hammers or grinders. The riveting task is accomplished by pressing the rivet set of the rivet hammer against the tail side of the rivet while the bucking bar is pressing on the head of the rivet as shown in Fig. 1, where the installed instruments are also presented. As the trigger of the rivet hammer is pressed, the rivet set is continuously hit by a reciprocating piston within the rivet hammer. The duration of this operation lasts from less than 0.5 to 1 s depending on the diameter of the rivet, the length of the rivet and the type of the rivet hammer.Two common design techniques to reduce vibration transmissibility of vibrating tools are (1) designing tools with damping mechanism, and (2) designing anti-vibration gloves or vibration absorbing handles (ILO, 1998). The results of the studies on glove design are somewhat conflicting. Some researchers reported significant vibration attenuation (Goel and Rim, 1987; Huuton et al., 1993; Klinenberg et al., 1994), while others reported none or little changes (Rens et al., 1987), even an increase in transmissibility (Griffin et al., 1982; Rens et al., 1987). Hence, tool manufacturers recently intensified their efforts on designing ‘vibration-damped’ rivet hammers and bucking bars.

A systematic study of rivet tools, i.e. rivet hammers and bucking bars, was conducted. Both analytical and experimental analyses of rivet tools are presented. From the results of this study, the following conclusions can be stated: 1. The isolation spring and polymer damper are very effective in reducing the overall level of vibration under both unweighted and weighted conditions. 2. The mass of the dolly head and the housing play a significant role in the vibration absorption of the bucking bars and they should not be replaced by light-weight material such as aluminum. 3. The duct iron with 2.72 kg (6.0 lb) is the optimum material for bucking bars. 4. The mathematical models of the hammer hitting force and the bucking bar were developed and had good agreement with experimental results. 5. Based on the results of the considered experimental design, the optimum design parameters for a rivet hammer were identified. 6. From the field testing, both subjective and objective evaluations have been consistent that the re-designed rivet hammers and bucking bars are better rated and ranked than conventional tools, except on the handle position. 7. Both subjective and objective evaluation results obtained from the laboratory and field tests were consistent indicating that the re-designed rivet hammers and bucking bars are better than the conventional rivet tools, except on the (initial) handle position rating. In order to reduce vibration-induced upper-extremity disorders and increase workers’ performance while operating high vibration power tools, the manufacturers should consider applying the vibration isolation and damping principles to the design of the tools as well as the ergonomic design principles as demonstrated in this study.