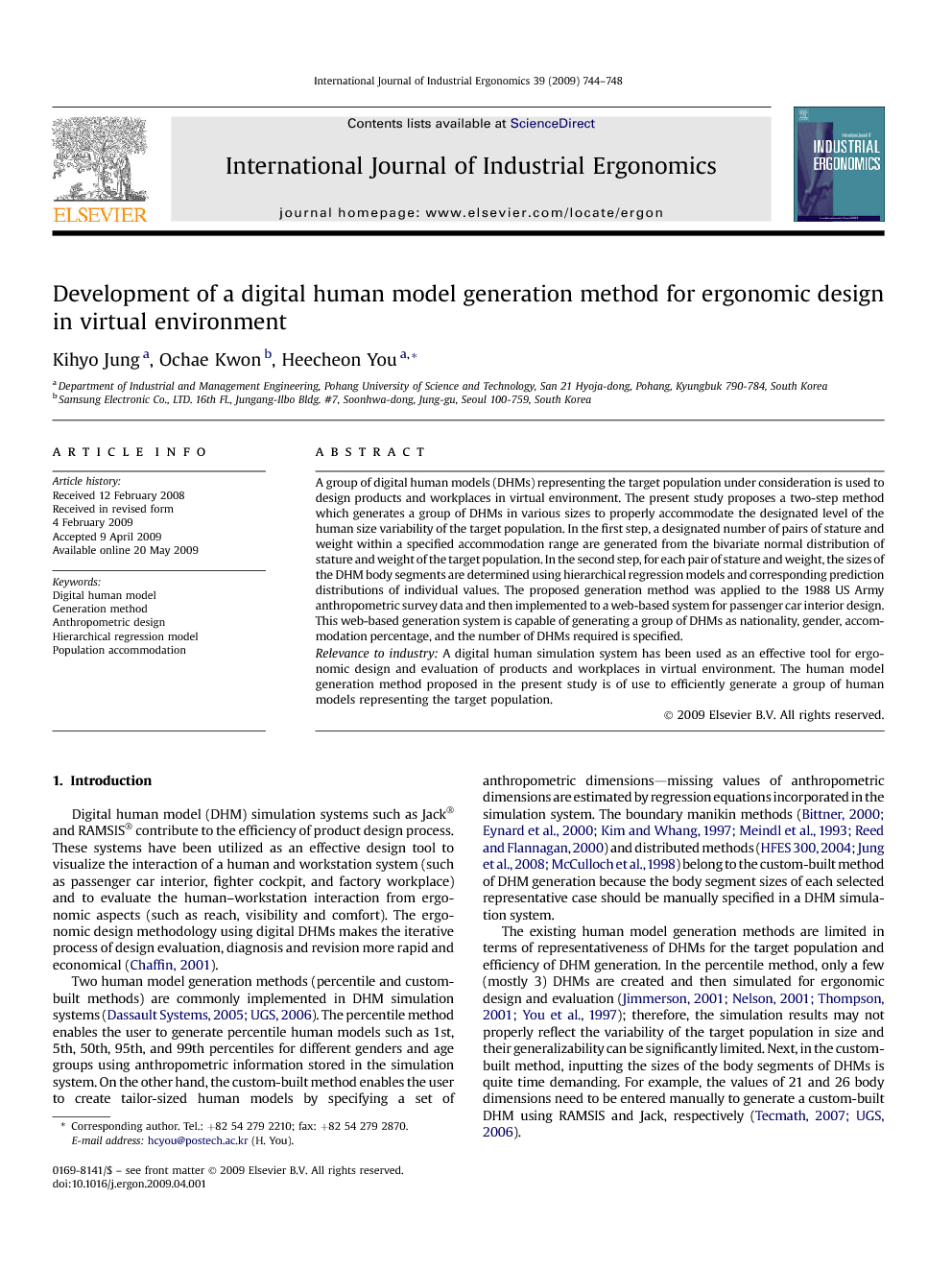 A group of digital human models (DHMs) representing the target population under consideration is used to design products and workplaces in virtual environment. The present study proposes a two-step method which generates a group of DHMs in various sizes to properly accommodate the designated level of the human size variability of the target population. In the first step, a designated number of pairs of stature and weight within a specified accommodation range are generated from the bivariate normal distribution of stature and weight of the target population. In the second step, for each pair of stature and weight, the sizes of the DHM body segments are determined using hierarchical regression models and corresponding prediction distributions of individual values. The proposed generation method was applied to the 1988 US Army anthropometric survey data and then implemented to a web-based system for passenger car interior design. This web-based generation system is capable of generating a group of DHMs as nationality, gender, accommodation percentage, and the number of DHMs required is specified. Relevance to industry A digital human simulation system has been used as an effective tool for ergonomic design and evaluation of products and workplaces in virtual environment. The human model generation method proposed in the present study is of use to efficiently generate a group of human models representing the target population.

Digital human model (DHM) simulation systems such as Jack® and RAMSIS® contribute to the efficiency of product design process. These systems have been utilized as an effective design tool to visualize the interaction of a human and workstation system (such as passenger car interior, fighter cockpit, and factory workplace) and to evaluate the human–workstation interaction from ergonomic aspects (such as reach, visibility and comfort). The ergonomic design methodology using digital DHMs makes the iterative process of design evaluation, diagnosis and revision more rapid and economical (Chaffin, 2001). Two human model generation methods (percentile and custom-built methods) are commonly implemented in DHM simulation systems (Dassault Systems, 2005 and UGS, 2006). The percentile method enables the user to generate percentile human models such as 1st, 5th, 50th, 95th, and 99th percentiles for different genders and age groups using anthropometric information stored in the simulation system. On the other hand, the custom-built method enables the user to create tailor-sized human models by specifying a set of anthropometric dimensions—missing values of anthropometric dimensions are estimated by regression equations incorporated in the simulation system. The boundary manikin methods (Bittner, 2000, Eynard et al., 2000, Kim and Whang, 1997, Meindl et al., 1993 and Reed and Flannagan, 2000) and distributed methods (HFES 300, 2004, Jung et al., 2008 and McCulloch et al., 1998) belong to the custom-built method of DHM generation because the body segment sizes of each selected representative case should be manually specified in a DHM simulation system. The existing human model generation methods are limited in terms of representativeness of DHMs for the target population and efficiency of DHM generation. In the percentile method, only a few (mostly 3) DHMs are created and then simulated for ergonomic design and evaluation (Jimmerson, 2001, Nelson, 2001, Thompson, 2001 and You et al., 1997); therefore, the simulation results may not properly reflect the variability of the target population in size and their generalizability can be significantly limited. Next, in the custom-built method, inputting the sizes of the body segments of DHMs is quite time demanding. For example, the values of 21 and 26 body dimensions need to be entered manually to generate a custom-built DHM using RAMSIS and Jack, respectively (Tecmath, 2007 and UGS, 2006). The present study proposed a novel method to generate a group of human models with various sizes which statistically represent the target population under consideration. Then, for efficient human model generation, this study implemented the proposed method into a web-based system, which automatically generates a group of human models as nationality, gender, accommodation range (the range of percentiles accommodated by a particular design) of the target population, and the number of human models required are specified.