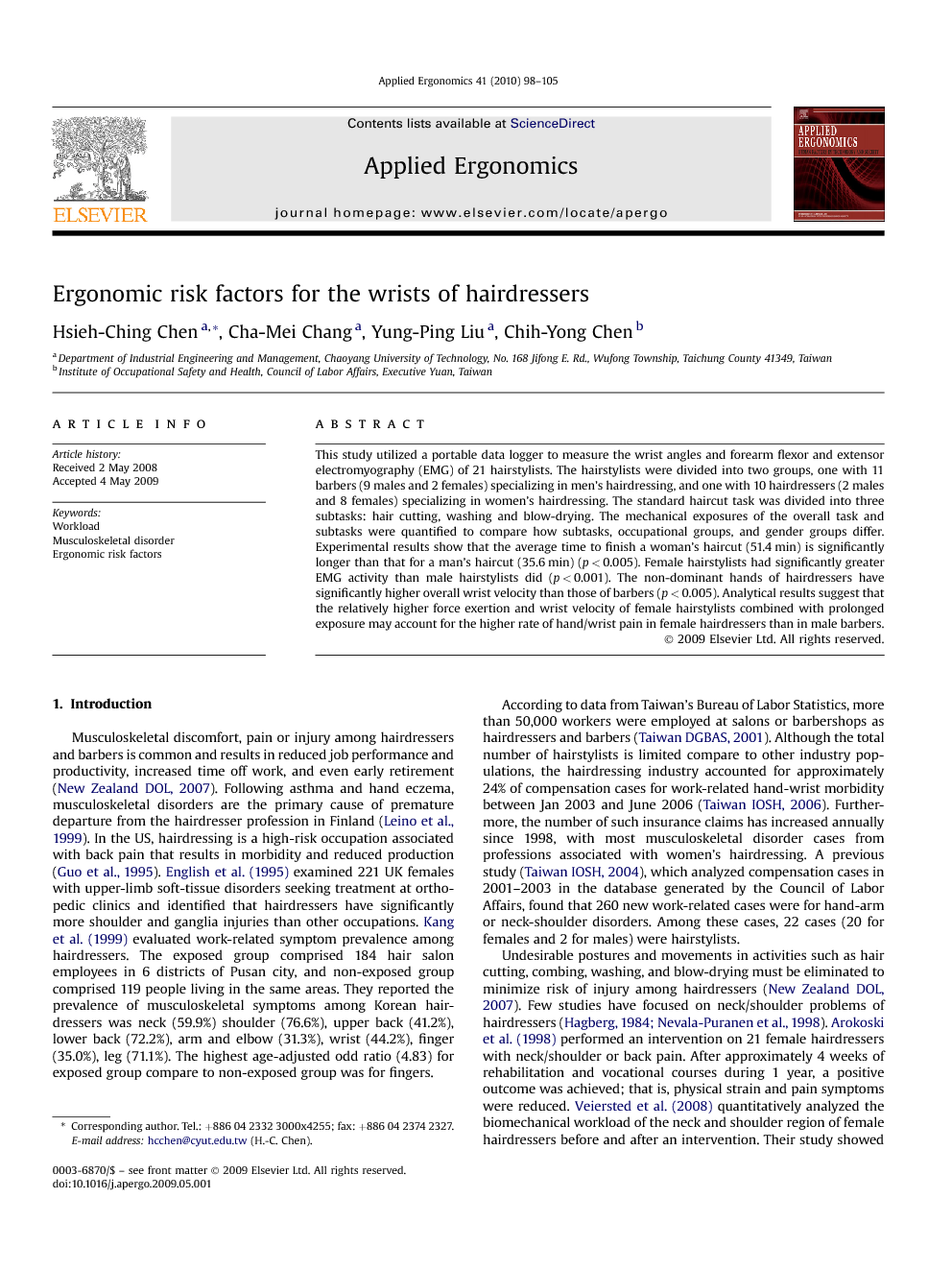 This study utilized a portable data logger to measure the wrist angles and forearm flexor and extensor electromyography (EMG) of 21 hairstylists. The hairstylists were divided into two groups, one with 11 barbers (9 males and 2 females) specializing in men's hairdressing, and one with 10 hairdressers (2 males and 8 females) specializing in women's hairdressing. The standard haircut task was divided into three subtasks: hair cutting, washing and blow-drying. The mechanical exposures of the overall task and subtasks were quantified to compare how subtasks, occupational groups, and gender groups differ. Experimental results show that the average time to finish a woman's haircut (51.4 min) is significantly longer than that for a man's haircut (35.6 min) (p < 0.005). Female hairstylists had significantly greater EMG activity than male hairstylists did (p < 0.001). The non-dominant hands of hairdressers have significantly higher overall wrist velocity than those of barbers (p < 0.005). Analytical results suggest that the relatively higher force exertion and wrist velocity of female hairstylists combined with prolonged exposure may account for the higher rate of hand/wrist pain in female hairdressers than in male barbers.

Musculoskeletal discomfort, pain or injury among hairdressers and barbers is common and results in reduced job performance and productivity, increased time off work, and even early retirement (New Zealand DOL, 2007). Following asthma and hand eczema, musculoskeletal disorders are the primary cause of premature departure from the hairdresser profession in Finland (Leino et al., 1999). In the US, hairdressing is a high-risk occupation associated with back pain that results in morbidity and reduced production (Guo et al., 1995). English et al. (1995) examined 221 UK females with upper-limb soft-tissue disorders seeking treatment at orthopedic clinics and identified that hairdressers have significantly more shoulder and ganglia injuries than other occupations. Kang et al. (1999) evaluated work-related symptom prevalence among hairdressers. The exposed group comprised 184 hair salon employees in 6 districts of Pusan city, and non-exposed group comprised 119 people living in the same areas. They reported the prevalence of musculoskeletal symptoms among Korean hairdressers was neck (59.9%) shoulder (76.6%), upper back (41.2%), lower back (72.2%), arm and elbow (31.3%), wrist (44.2%), finger (35.0%), leg (71.1%). The highest age-adjusted odd ratio (4.83) for exposed group compare to non-exposed group was for fingers. According to data from Taiwan's Bureau of Labor Statistics, more than 50,000 workers were employed at salons or barbershops as hairdressers and barbers (Taiwan DGBAS, 2001). Although the total number of hairstylists is limited compare to other industry populations, the hairdressing industry accounted for approximately 24% of compensation cases for work-related hand-wrist morbidity between Jan 2003 and June 2006 (Taiwan IOSH, 2006). Furthermore, the number of such insurance claims has increased annually since 1998, with most musculoskeletal disorder cases from professions associated with women's hairdressing. A previous study (Taiwan IOSH, 2004), which analyzed compensation cases in 2001–2003 in the database generated by the Council of Labor Affairs, found that 260 new work-related cases were for hand-arm or neck-shoulder disorders. Among these cases, 22 cases (20 for females and 2 for males) were hairstylists. Undesirable postures and movements in activities such as hair cutting, combing, washing, and blow-drying must be eliminated to minimize risk of injury among hairdressers (New Zealand DOL, 2007). Few studies have focused on neck/shoulder problems of hairdressers (Hagberg, 1984 and Nevala-Puranen et al., 1998). Arokoski et al. (1998) performed an intervention on 21 female hairdressers with neck/shoulder or back pain. After approximately 4 weeks of rehabilitation and vocational courses during 1 year, a positive outcome was achieved; that is, physical strain and pain symptoms were reduced. Veiersted et al. (2008) quantitatively analyzed the biomechanical workload of the neck and shoulder region of female hairdressers before and after an intervention. Their study showed that hairdressers typically worked with their arms elevated at ≥60° for approximately 13% of total work time. Although strain injuries to wrists or elbows are major reasons why hairdressers leave the profession (Leino et al., 1999), knowledge regarding the mechanical exposures of hairdressers' remains limited. This study assesses and compares the mechanical exposure of the wrists of barbers and hairdresser while performing regular haircutting tasks.

Musculoskeletal symptoms are more prevalent among female than male hairstylists in Taiwan (Taiwan IOSH, 2004). This outcome may reflect the fact that more females worked as hairdressers than as barbers in Taiwan and due to differences between barber and hairdresser tasks. This study demonstrates that female subjects had significantly higher EMG activity in all statistical tests, and significantly faster overall extension–flexion velocity in their non-dominant hands than male subjects. In addition to significant gender differences in EMG activity, significant side × occupation and side × subtask × occupation interactive effects existed in angle position, and a significant subtask × occupation effect was identified for extension–flexion velocity. These significant interactive effects associated with occupational factor are indicative of the task differences between barbers and hairdressers. According to onsite observations, barbers and hairdressers used their non-dominant hands to comb, hold hair with their fingers and wave/curl hair while cutting and/or blow-drying. Handling the long hair of female customers typically required higher exertion and possibly faster hand movement of the non-dominant hand than that experienced by barbers handling short hair. Comparatively, barbers had fewer fast movements while combing hair, holding hair with their fingers, and blow-drying men's hair than hairdressers for the same tasks. Since elevated dynamic EMGs result from increased exertion and fast muscle contraction, the slow movements of barbers may account for the significantly lower EMGs in the non-dominant hands of barbers than those of hairdressers. This observation may explain the higher overall extensor EMG (Table 3) and faster overall flexion velocity (Table 5) demonstrated by non-dominant hands of hairdressers than barbers. Another possible cause of higher complaint rate among hairdressers than barbers may be their longer continual exposure, although both occupation groups exhibited relatively similar working postures and EMG activity in their dominant hands. The average duration of a woman's haircut was 15 min longer than a man's haircut—haircutting was 5 min longer and blow-drying was 10 min longer. During the haircutting and blow-drying subtasks, hairdressers generally applied more force and higher velocity with their non-dominant hands than did barbers. Hairdressers are therefore less likely to share the workload with their dominant hands by using non-dominant hands when performing auxiliary tasks during rest periods. Additionally, the muscles, tendons and joints of hairdressers require longer time to recover from rapid movement than do those of barbers. Thus, the combination of fast movement and prolonged exposure may account for hairdressers having a greater complaint rate than barbers. Table 6 lists the wrist exposure of workers' right or dominant hand in several industrial studies. According to previous studies, numerous guidelines for work methods focus on exposure level. Reducing the level of internal biomechanical exposure is recommended when exposure exceeds a threshold level of 30–50%MVC (dynamic/occasional contraction) (Westgaard and Winkel, 1996). In this study, the 90th percentile of overall muscular loads measured in dominant flexors (19–24%MVC) and extensors (21–27%MVC) of barbers and hairdressers were <30%MVC, and less than those values for machine-milking (Stål et al., 2000) and poultry-deboning tasks (Juul-Kristensen et al., 2002). Nevertheless, when only female hairstylists were considered, their mean dominant flexor EMG (29.4%MVC) and extensor EMG (34%MVC) were higher than those values for poultry-deboning tasks (Juul-Kristensen et al., 2002). According to Kilbom (1994) and Malchaire et al. (1997), 15% MVC is the mean acceptable contraction intensity when working over prolonged periods. Comparing this limit and that for several industrial tasks (Table 6), this study identified low muscular loading in male subjects and moderate muscular loading in female subjects during haircutting tasks.