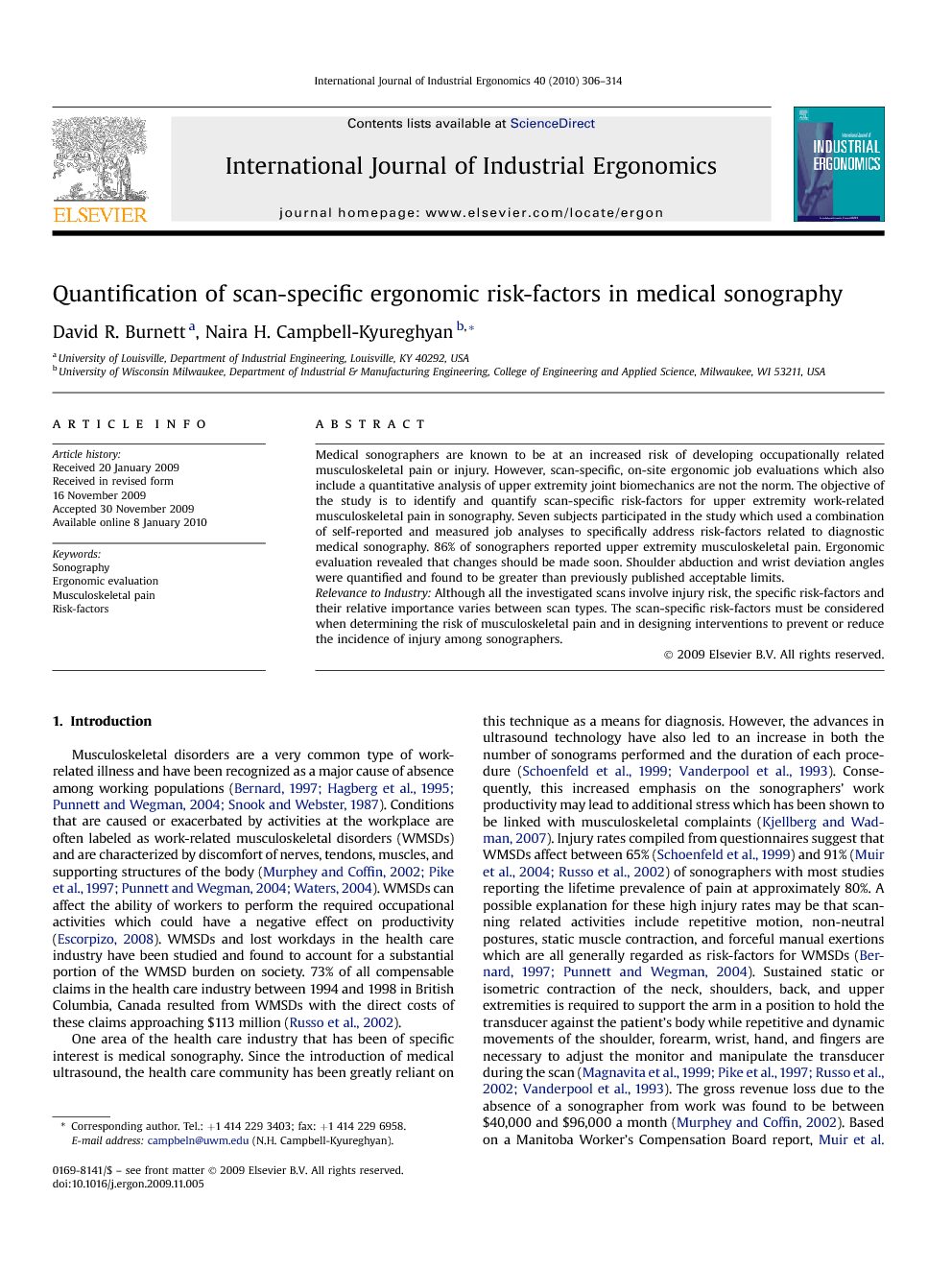 Medical sonographers are known to be at an increased risk of developing occupationally related musculoskeletal pain or injury. However, scan-specific, on-site ergonomic job evaluations which also include a quantitative analysis of upper extremity joint biomechanics are not the norm. The objective of the study is to identify and quantify scan-specific risk-factors for upper extremity work-related musculoskeletal pain in sonography. Seven subjects participated in the study which used a combination of self-reported and measured job analyses to specifically address risk-factors related to diagnostic medical sonography. 86% of sonographers reported upper extremity musculoskeletal pain. Ergonomic evaluation revealed that changes should be made soon. Shoulder abduction and wrist deviation angles were quantified and found to be greater than previously published acceptable limits. Relevance to Industry Although all the investigated scans involve injury risk, the specific risk-factors and their relative importance varies between scan types. The scan-specific risk-factors must be considered when determining the risk of musculoskeletal pain and in designing interventions to prevent or reduce the incidence of injury among sonographers.

Musculoskeletal disorders are a very common type of work-related illness and have been recognized as a major cause of absence among working populations (Bernard, 1997, Hagberg et al., 1995, Punnett and Wegman, 2004 and Snook and Webster, 1987). Conditions that are caused or exacerbated by activities at the workplace are often labeled as work-related musculoskeletal disorders (WMSDs) and are characterized by discomfort of nerves, tendons, muscles, and supporting structures of the body (Murphey and Coffin, 2002, Pike et al., 1997, Punnett and Wegman, 2004 and Waters, 2004). WMSDs can affect the ability of workers to perform the required occupational activities which could have a negative effect on productivity (Escorpizo, 2008). WMSDs and lost workdays in the health care industry have been studied and found to account for a substantial portion of the WMSD burden on society. 73% of all compensable claims in the health care industry between 1994 and 1998 in British Columbia, Canada resulted from WMSDs with the direct costs of these claims approaching $113 million (Russo et al., 2002). One area of the health care industry that has been of specific interest is medical sonography. Since the introduction of medical ultrasound, the health care community has been greatly reliant on this technique as a means for diagnosis. However, the advances in ultrasound technology have also led to an increase in both the number of sonograms performed and the duration of each procedure (Schoenfeld et al., 1999 and Vanderpool et al., 1993). Consequently, this increased emphasis on the sonographers' work productivity may lead to additional stress which has been shown to be linked with musculoskeletal complaints (Kjellberg and Wadman, 2007). Injury rates compiled from questionnaires suggest that WMSDs affect between 65% (Schoenfeld et al., 1999) and 91% (Muir et al., 2004 and Russo et al., 2002) of sonographers with most studies reporting the lifetime prevalence of pain at approximately 80%. A possible explanation for these high injury rates may be that scanning related activities include repetitive motion, non-neutral postures, static muscle contraction, and forceful manual exertions which are all generally regarded as risk-factors for WMSDs (Bernard, 1997 and Punnett and Wegman, 2004). Sustained static or isometric contraction of the neck, shoulders, back, and upper extremities is required to support the arm in a position to hold the transducer against the patient's body while repetitive and dynamic movements of the shoulder, forearm, wrist, hand, and fingers are necessary to adjust the monitor and manipulate the transducer during the scan (Magnavita et al., 1999, Pike et al., 1997, Russo et al., 2002 and Vanderpool et al., 1993). The gross revenue loss due to the absence of a sonographer from work was found to be between $40,000 and $96,000 a month (Murphey and Coffin, 2002). Based on a Manitoba Worker's Compensation Board report, Muir et al. (2004) reported increasing trends in both direct costs and workdays lost per year. Specifically, direct costs and lost workdays per year were $4839 and 97, respectively, in 1996. In 2002 however, direct costs were estimated at $120,038 with approximately 1144 lost workdays. Moreover, these costs were associated with injuries among less than 3% of all sonographers who filed work-related injury claims during the year (Friesen et al., 2006). Numerous studies utilized self-administered questionnaires to determine the existence of perceived risk-factors for injury in medical sonographers. The subjects surveyed in previous studies included general ultrasound sonographers (Friesen et al., 2006, Gregory, 1998, Habes and Baron, 2000, Muir et al., 2004, Pike et al., 1997, Russo et al., 2002 and Wihlidal and Kumar, 1997), cardiac sonographers (Horkey and King, 2004, McCulloch et al., 2002, Smith et al., 1997 and Vanderpool et al., 1993) obstetrical and gynecological sonographers (Schoenfeld et al., 1999), and physicians (Magnavita et al., 1999). Possible work-related risk-factors that are commonly reported include frequency of scans, duration of individual scanning procedures, entire time spent scanning per day, non-neutral postures, inadequate equipment and tools, limited number of breaks, overall ergonomic design of workstations or work facility, twisting and bending, manual handling of patients, and scanning obese patients. The prevalence of work-related musculoskeletal pain in sonographers has been established through self-reported questionnaires. Accordingly, almost 75% of survey respondents reported that ergonomic interventions were necessary (Horkey and King, 2004), and Jakes (2001) recommended that employers have their site evaluated by an ergonomic expert who can suggest necessary adjustments and offer education regarding safe working habits. However, studies that included an actual ergonomic assessment of an ultrasound facility to more accurately determine the possible causes of work-related injury are limited. Russo et al. (2002) surveyed over 200 sonographers and found that less than half of the respondents indicated that a person trained in ergonomics had analyzed their facility. Friesen et al. (2006) completed a biomechanical assessment which allowed for the quantification of joint angles, limb position, and joint torque measurements of sonographers' working postures by performing video-taped analysis of on-site evaluations. The results were of limited use since the measurements were based on a single frame of videotape which was set in the sagittal plane and their software analysis system was unable to evaluate multiple planes of movement. Habes and Baron (2000) performed an ergonomic analysis of video-taped ultrasound procedures in order to quantitatively measure upper extremity postures found during scanning. However, this study evaluated only 2 different scanning techniques, and did not report wrist postures. Recently, Village and Trask (2007) utilized video-based postural analysis and electromyography of three shoulder muscles to further assess the potential occupational risk-factors associated with sonography. A more recent study by Paschoarelli et al. (2008) measured wrist movement with electrogoniometers to determine the effectiveness of redesigned transducers. The subjects participating in the study were not full-time sonographers and had no previous experience performing ultrasound examinations. From this review, it is evident that scan-specific, on-site ergonomic job evaluations which also include a quantitative analysis of upper extremity joint biomechanics are not the norm. It is necessary to fill these gaps and gain a greater understanding of the occupational hazards related to medical sonography and thus, focus proper intervention techniques to reduce this risk of work-related injury.

Medical sonographers are known to be at an increased risk of developing occupationally related musculoskeletal pain or injury. The current study utilized self-reporting, ergonomic evaluation, and biomechanical analysis to determine the risk-factors for specific scans. The results indicate that, although all the investigated scans involve injury risk, the specific risk-factors and their relative importance varies between scan types. The scan-specific risk-factors must be considered when determining the risk of musculoskeletal pain and in designing interventions to prevent or reduce the incidence of injury among sonographers.