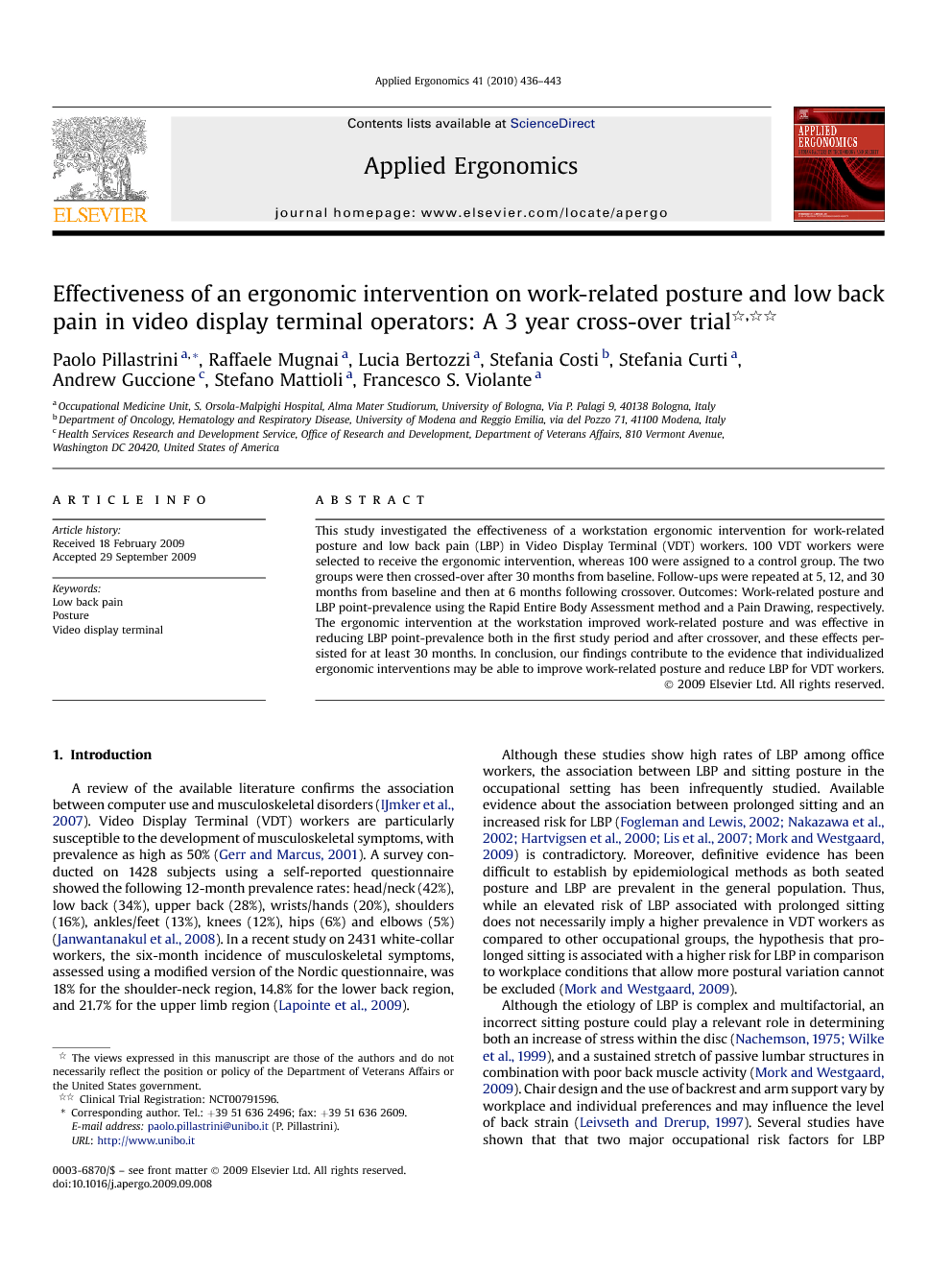 A review of the available literature confirms the association between computer use and musculoskeletal disorders (IJmker et al., 2007). Video Display Terminal (VDT) workers are particularly susceptible to the development of musculoskeletal symptoms, with prevalence as high as 50% (Gerr and Marcus, 2001). A survey conducted on 1428 subjects using a self-reported questionnaire showed the following 12-month prevalence rates: head/neck (42%), low back (34%), upper back (28%), wrists/hands (20%), shoulders (16%), ankles/feet (13%), knees (12%), hips (6%) and elbows (5%) (Janwantanakul et al., 2008). In a recent study on 2431 white-collar workers, the six-month incidence of musculoskeletal symptoms, assessed using a modified version of the Nordic questionnaire, was 18% for the shoulder-neck region, 14.8% for the lower back region, and 21.7% for the upper limb region (Lapointe et al., 2009). Although these studies show high rates of LBP among office workers, the association between LBP and sitting posture in the occupational setting has been infrequently studied. Available evidence about the association between prolonged sitting and an increased risk for LBP (Fogleman and Lewis, 2002, Nakazawa et al., 2002, Hartvigsen et al., 2000, Lis et al., 2007 and Mork and Westgaard, 2009) is contradictory. Moreover, definitive evidence has been difficult to establish by epidemiological methods as both seated posture and LBP are prevalent in the general population. Thus, while an elevated risk of LBP associated with prolonged sitting does not necessarily imply a higher prevalence in VDT workers as compared to other occupational groups, the hypothesis that prolonged sitting is associated with a higher risk for LBP in comparison to workplace conditions that allow more postural variation cannot be excluded (Mork and Westgaard, 2009). Although the etiology of LBP is complex and multifactorial, an incorrect sitting posture could play a relevant role in determining both an increase of stress within the disc (Nachemson, 1975 and Wilke et al., 1999), and a sustained stretch of passive lumbar structures in combination with poor back muscle activity (Mork and Westgaard, 2009). Chair design and the use of backrest and arm support vary by workplace and individual preferences and may influence the level of back strain (Leivseth and Drerup, 1997). Several studies have shown that that two major occupational risk factors for LBP symptoms are static muscle load (Bernard, 1997 and Hedman and Fernie, 1997) and flexed curvature of the lumbar spine, both of which are involved in seated work tasks (Wilder et al., 1988, Chaffin and Andersson, 1990 and Bernard, 1997). Biomechanical studies have shown that an incorrect sitting posture can affect a posterior rotation of the pelvis, resulting in decreased sacral inclination and lumbar lordosis (Andersson et al., 1979 and Lord et al., 1997) and increased forces at the discs (Lord et al., 1997 and Andersson and Ortengren, 1974). For these reasons, lumbar supports have been proposed as a possible option in therapeutic and preventive strategies for LBP. However, the literature to date provides conflicting evidence on the effectiveness of lumbar supports for primary and secondary prevention of LBP. The first reviews published on this subject concluded that there was no evidence on the effectiveness of primary prevention of LBP in the workplace (Van Tulder et al., 2000 and van Poppel et al., 2004). van Duijvenbode et al. (2008), in their review, concluded that there is moderate evidence that lumbar supports are not more effective than either no intervention at all or training in preventing low back pain and that there is conflicting evidence whether they are effective supplements to other preventive interventions. However, more recent studies and reviews are lending support toward belief in their efficacy (Roelofs et al., 2007 and Calmels et al., 2009). One persistent methodological issue in many studies that may have contributed to a lack of consensus on the basis of the available evidence is that the terminology employed in the literature is inconsistent, with the term “lumbar support” often used interchangeably with “lumbar belt”, thus decreasing the interpretability of results across studies.

This study provides evidence supporting recommendations for workstation ergonomic adjustments in order to improve work-related posture and thereby reduce low back complaints among VDT operators. Limited ergonomic education (i.e., informational brochures) appears to be insufficient intervention to improve work-related posture and reduce LBP point-prevalence. Further studies are required to investigate the effectiveness of an ergonomic intervention in diminishing LBP intensity and subsequent functional disability as well as musculoskeletal disorders in the other anatomical regions.