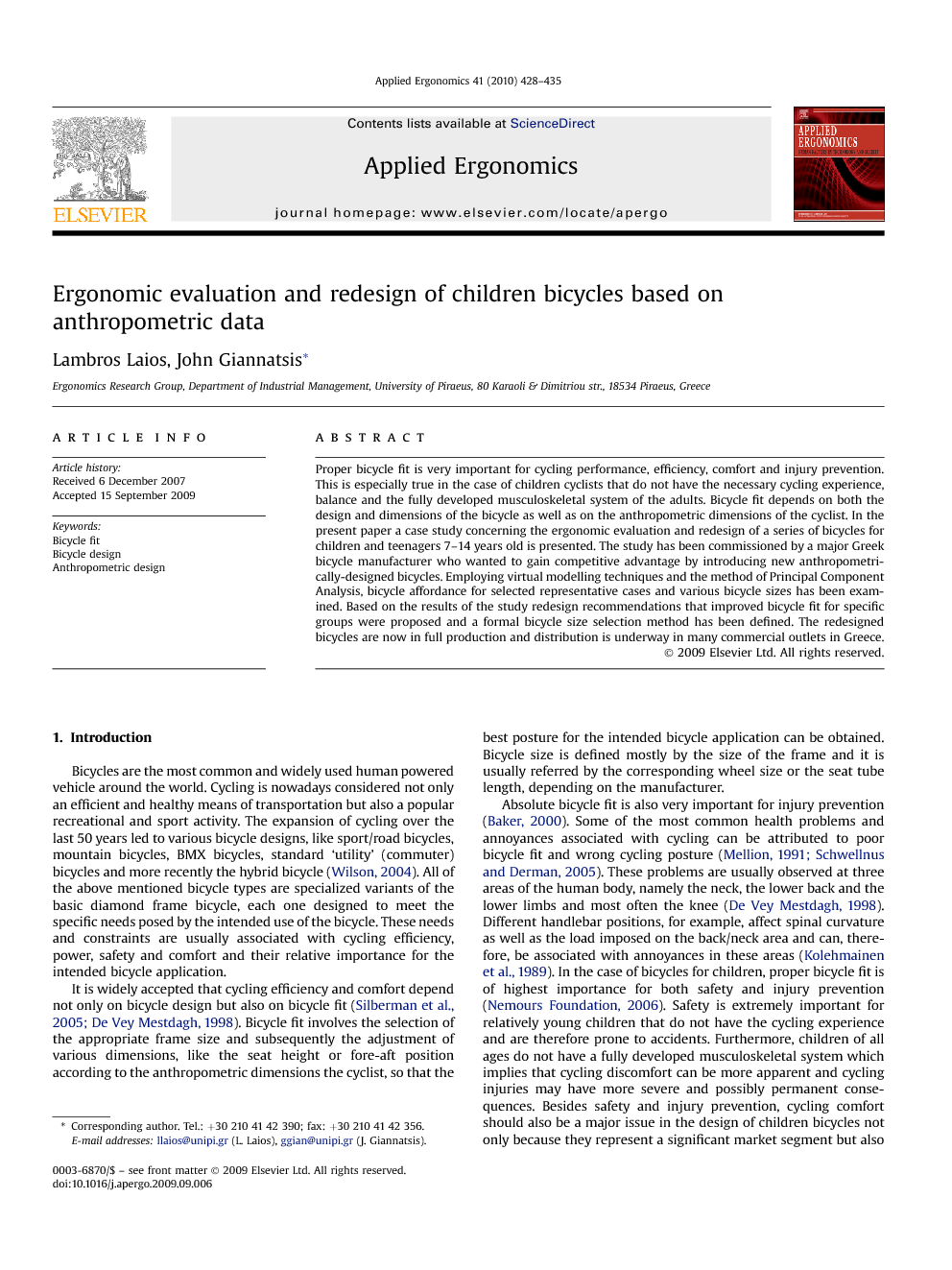 Proper bicycle fit is very important for cycling performance, efficiency, comfort and injury prevention. This is especially true in the case of children cyclists that do not have the necessary cycling experience, balance and the fully developed musculoskeletal system of the adults. Bicycle fit depends on both the design and dimensions of the bicycle as well as on the anthropometric dimensions of the cyclist. In the present paper a case study concerning the ergonomic evaluation and redesign of a series of bicycles for children and teenagers 7–14 years old is presented. The study has been commissioned by a major Greek bicycle manufacturer who wanted to gain competitive advantage by introducing new anthropometrically-designed bicycles. Employing virtual modelling techniques and the method of Principal Component Analysis, bicycle affordance for selected representative cases and various bicycle sizes has been examined. Based on the results of the study redesign recommendations that improved bicycle fit for specific groups were proposed and a formal bicycle size selection method has been defined. The redesigned bicycles are now in full production and distribution is underway in many commercial outlets in Greece.

Bicycles are the most common and widely used human powered vehicle around the world. Cycling is nowadays considered not only an efficient and healthy means of transportation but also a popular recreational and sport activity. The expansion of cycling over the last 50 years led to various bicycle designs, like sport/road bicycles, mountain bicycles, BMX bicycles, standard ‘utility’ (commuter) bicycles and more recently the hybrid bicycle (Wilson, 2004). All of the above mentioned bicycle types are specialized variants of the basic diamond frame bicycle, each one designed to meet the specific needs posed by the intended use of the bicycle. These needs and constraints are usually associated with cycling efficiency, power, safety and comfort and their relative importance for the intended bicycle application. It is widely accepted that cycling efficiency and comfort depend not only on bicycle design but also on bicycle fit (Silberman et al., 2005 and De Vey Mestdagh, 1998). Bicycle fit involves the selection of the appropriate frame size and subsequently the adjustment of various dimensions, like the seat height or fore-aft position according to the anthropometric dimensions the cyclist, so that the best posture for the intended bicycle application can be obtained. Bicycle size is defined mostly by the size of the frame and it is usually referred by the corresponding wheel size or the seat tube length, depending on the manufacturer. Absolute bicycle fit is also very important for injury prevention (Baker, 2000). Some of the most common health problems and annoyances associated with cycling can be attributed to poor bicycle fit and wrong cycling posture (Mellion, 1991 and Schwellnus and Derman, 2005). These problems are usually observed at three areas of the human body, namely the neck, the lower back and the lower limbs and most often the knee (De Vey Mestdagh, 1998). Different handlebar positions, for example, affect spinal curvature as well as the load imposed on the back/neck area and can, therefore, be associated with annoyances in these areas (Kolehmainen et al., 1989). In the case of bicycles for children, proper bicycle fit is of highest importance for both safety and injury prevention (Nemours Foundation, 2006). Safety is extremely important for relatively young children that do not have the cycling experience and are therefore prone to accidents. Furthermore, children of all ages do not have a fully developed musculoskeletal system which implies that cycling discomfort can be more apparent and cycling injuries may have more severe and possibly permanent consequences. Besides safety and injury prevention, cycling comfort should also be a major issue in the design of children bicycles not only because they represent a significant market segment but also because of their future potential as customers of the bicycle industry. It can be reasonably argued that the feeling of discomfort during cycling prevents the frequent use of bicycles (Christiaans and Bremner, 1998). Since cycling habit is usually acquired in the younger ages, from childhood to puberty, it is obvious that the corresponding bicycles should provide maximum accommodation and comfort to encourage the use of bicycles and cycling in general. Because of the wide variance in anthropometric dimensions between children, even of the same age, bicycle manufacturers offer a series of bicycles of various sizes. The design of these bicycles involves the definition of frames of different size and dimensions as well as the definition of the corresponding adjustment ranges for the seat and the handlebar. In order to fully accommodate the majority of possible users, the design of the bicycles should be based on data that take into account the distribution of anthropometric dimensions among the children. It is not uncommon among bicycle manufacturers to define the frame dimensions of the children' bicycles, as well as the allowable adjustment range for the various components, according to assumptions regarding the dimensions of the children. According to the designers of the examined bicycles, these assumptions were mostly based on prior experience and data from other non-Greek bicycle manufacturers. This practice, obviously, does not take into account the vast individual differences in the anthropometric dimensions of the Greek children. In the present study the ergonomic evaluation of the design of a series of child bicycles, produced by a major Greek bicycle manufacturer, based on Greek children anthropometric data is presented. This evaluation involved the control of the geometry and dimension of the bicycles' frames as well as the control of the permissible adjustment range for the saddle and the handlebar, with respect to the specific population. The objective of the study was to investigate the affordance of the present bicycle design for the investigated population and if necessary to redesign the bicycles so that the best possible fit could be obtained, thereby increasing cycling safety and comfort for the young cyclists.

The main objective of the study presented in this paper was to investigate and possibly to improve the fitness of commercial children bicycles for the Greek market. The investigation focused on five critical bicycle dimensions; the saddle-handlebar horizontal distance, the saddle height and its adjustment range, the handlebar height and its adjustment range, the handlebar width and the vertical distance from the saddle to the ground. Nine basic anthropometric dimensions of children for the assessment of the limbs length and the torso height were examined. Since the range of these anthropometric dimensions in the target group of the study, namely children age 7–14, is quite large, three bicycles with variable size were examined. Each bicycle size is targeted to a specific children subgroup defined by their height. Bicycle investigation involved the examination of nine cases-children representative of the anthropometric dimensions of the corresponding height subgroup. Since there were multiple relevant anthropometric dimensions the method of Principal Component Analysis was applied to reduce the problem to two dimensions and hence make possible the graphical representation of data and the selection of cases. For the assessment of fit of each bicycle size to the corresponding children subgroup the method of virtual modelling and analysis was employed. Virtual modelling method was selected because it offers the advantage of cost-effective and fast examination of multiple cases, assuming that the virtual mannequins accurately represent the actual human dimensions. In the present study NexGen Ergonomics – Mannequin software was used. An initial examination of the mannequin representation showed that mannequins reflected with sufficient, for the purposes of the study, accuracy the nominal dimensions of the children. Virtual analysis involved the placement of static mannequins in an ‘optimum’ posture on 3D CAD bicycle models and the measurement of the associated deviations. The mannequins' posture was defined according to recommendations for maximum safety and comfort of previous studies on adult and children cyclists. Based on the evaluation results adjustments in the dimensions of the frames and the saddle/handlebar height ranges were proposed. In addition to the proposed adjustments, a formal guide for the selection of bicycle size was also proposed. Purpose of the guide was to help the selection of bicycle size based on actual anthropometric dimensions of the child, namely its height and inseam length. This guide is aimed of course to the investigated population and the specific bicycle series and should not be considered as a definite selection guide of bicycle size for other manufacturers and/or user groups. Experience gained through the present study indicates that virtual modelling and analysis, based on a representative range of selected anthropometric data, could be a valuable tool for the bicycle design process. According to the designers involved, virtual modelling provides valuable insight in the initial design stages, where the main dimensions of the frame and the adjustment ranges for saddle and handlebar are defined. However, due to representation accuracy issues and its relatively static nature, virtual modelling results should be subsequently confirmed and supported by actual testing with human subjects representing the full range of the indented users. This can be a topic of a subsequent research that poses some problems because the researchers must identify a number of “boundary and internal cases” each defined from various individual anthropometric dimensions. For the purposes of the present first study this would prolong the duration of the assignment, something not desirable by the bicycle manufacturer. Regarding the main problem of bicycle fit, it was observed that most of the relevant literature was focused on adult populations and mainly on sport cycling, where efficiency is the main issue. Further investigation is, therefore, required for the verification of the proposed ‘optimum’, in terms of safety and comfort, posture for cycling in urban areas, as well as for the identification of possible differences in cycling style and habits between children and adults.