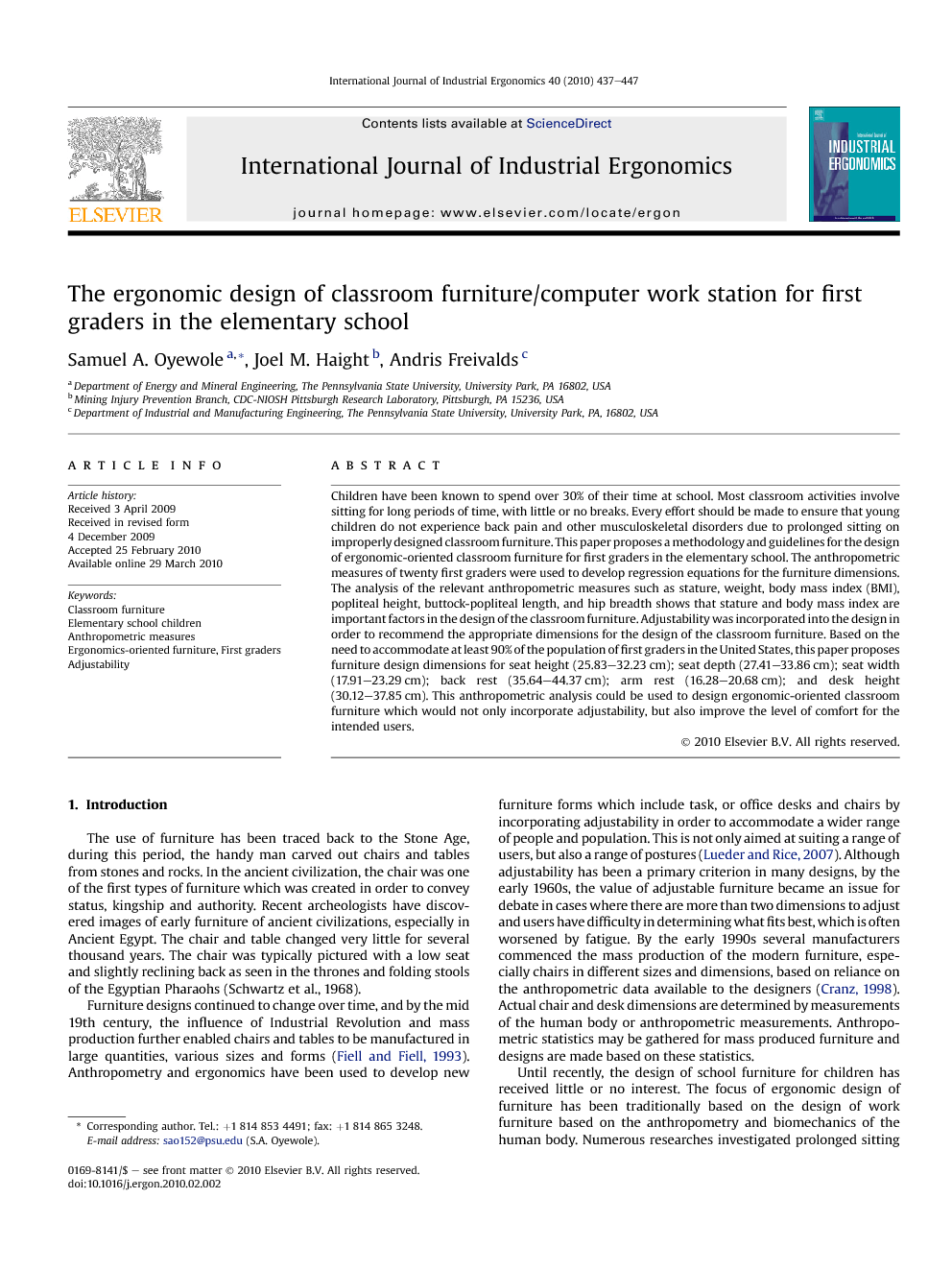 Children have been known to spend over 30% of their time at school. Most classroom activities involve sitting for long periods of time, with little or no breaks. Every effort should be made to ensure that young children do not experience back pain and other musculoskeletal disorders due to prolonged sitting on improperly designed classroom furniture. This paper proposes a methodology and guidelines for the design of ergonomic-oriented classroom furniture for first graders in the elementary school. The anthropometric measures of twenty first graders were used to develop regression equations for the furniture dimensions. The analysis of the relevant anthropometric measures such as stature, weight, body mass index (BMI), popliteal height, buttock-popliteal length, and hip breadth shows that stature and body mass index are important factors in the design of the classroom furniture. Adjustability was incorporated into the design in order to recommend the appropriate dimensions for the design of the classroom furniture. Based on the need to accommodate at least 90% of the population of first graders in the United States, this paper proposes furniture design dimensions for seat height (25.83–32.23 cm); seat depth (27.41–33.86 cm); seat width (17.91–23.29 cm); back rest (35.64–44.37 cm); arm rest (16.28–20.68 cm); and desk height (30.12–37.85 cm). This anthropometric analysis could be used to design ergonomic-oriented classroom furniture which would not only incorporate adjustability, but also improve the level of comfort for the intended users.

The results of the analysis indicate that appropriate ergonomics-oriented classroom furniture could be designed based on the data obtained from the intended users. In most cases, improper desk – chair combination are often the major reasons why children experience some level of discomfort while in the classroom. Initial examination of the existing furniture indicated several anomalies in the design of the classroom benches and desks such as lack of cushion on the hardwood benches, and lack of backrests. Based on several complain of body aches and pains from the children, a survey was conducted to obtain additional information which could be helpful for the research analysis. Findings from the questionnaire showed that a large majority of the 126 first graders surveyed (95%) attended classes more than three times a week and were seated in the classroom for more than four hours daily (93%). Also, 58% of the children acknowledged they had been absent from school at least once in a month due to aches and pains often associated with their sitting postures while in the classroom. In summary, this paper analyzed anthropometric information obtained from the subjects to provide adequate guidelines for the design of adjustable classroom furniture. This was based on the need to reduce the level of mismatch between the first graders and the type of furniture provided for their use. One of the major objectives of this research was to propose ergonomic design guideline for classroom furniture that would accommodate at least 90% of the entire population of elementary school first graders in the United States. Values from relevant growth charts which comprises of stature-for-age and weight-for-age percentiles limits for boys and girls of ages 2 to 20 years old was obtained and incorporated into anthropometric equations (see Equations (5), (6), (7), (8), (9) and (10)) in the quest of obtaining adjustability ranges for the classroom furniture. In order to accommodate at least 90% of the population of first graders, the following dimensions obtained from Table 4, Table 5, Table 6, Table 7, Table 8 and Table 9 are recommended (based on a recommended clearance of ±1 to 2 cm): For seat height (25.83–32.23 cm); seat depth (27.41–33.86 cm); seat width (17.91–23.29 cm); back rest (35.64–44.37 cm); arm rest (16.28–20.68 cm); and desk height (30.12–37.85 cm). Based on the recommended dimensions of the elementary school furniture design for first graders, it will be easier to produce adjustable ergonomics-oriented classroom furniture within the recommended design limits. Even though adjustability could increase the cost of production, a major benefit of incorporating adjustability into the furniture design is the opportunity to increase the accommodation limits. Based on the variability in the body sizes and dimensions of the students, individual classroom furniture for the children is recommended, as this would provide the opportunity for each of the children to adjust their desk/workstation based on their preference or comfort level. This will ultimately enable the reduction of the severity rate of pains and aches experienced by the children. 5.1. Future work and limitations of the study Further evaluations would incorporate additional anthropometric data from other age groups of young elementary school students, from different parts of the world, with more gender mix in the experimental design. More gender mix and other individual differences such as race, age, and more data from multiple elementary schools would have also improved the quality of the experiment. In the future, a comparison of the results obtained in this analysis and the data obtained from ISO 5970 – 1979 and the New British and European Educational Furniture Standard (EN 1729). Although the results of this experimental study show that stature is a good predictor of a number of other body dimensions such as popliteal height, elbow height, etc, efforts could be made to determine other possible predictors such as weight or BMI. In terms of the hip breath, the body weight could have also been analyzed as a possible predictor and the relationship obtained could have been used to compare to that obtained when the BMI was used. Although this study proposed classroom furniture design guidelines to accommodate approximately 90% of the population of first graders in the United States, significant increase in the overall accommodation could have been obtained if further analysis was conducted to investigate the possibility of increasing the height adjustability limits. This would have further provided accommodation for extreme individuals within the population. This design recommended adjustability for all the dimensions of the classroom furniture. Incorporating too much adjustability could be extremely costly which could lead to a difficulty in affordability. The accuracy of the experiment would have also been improved if the number of experimental subjects had been increased.