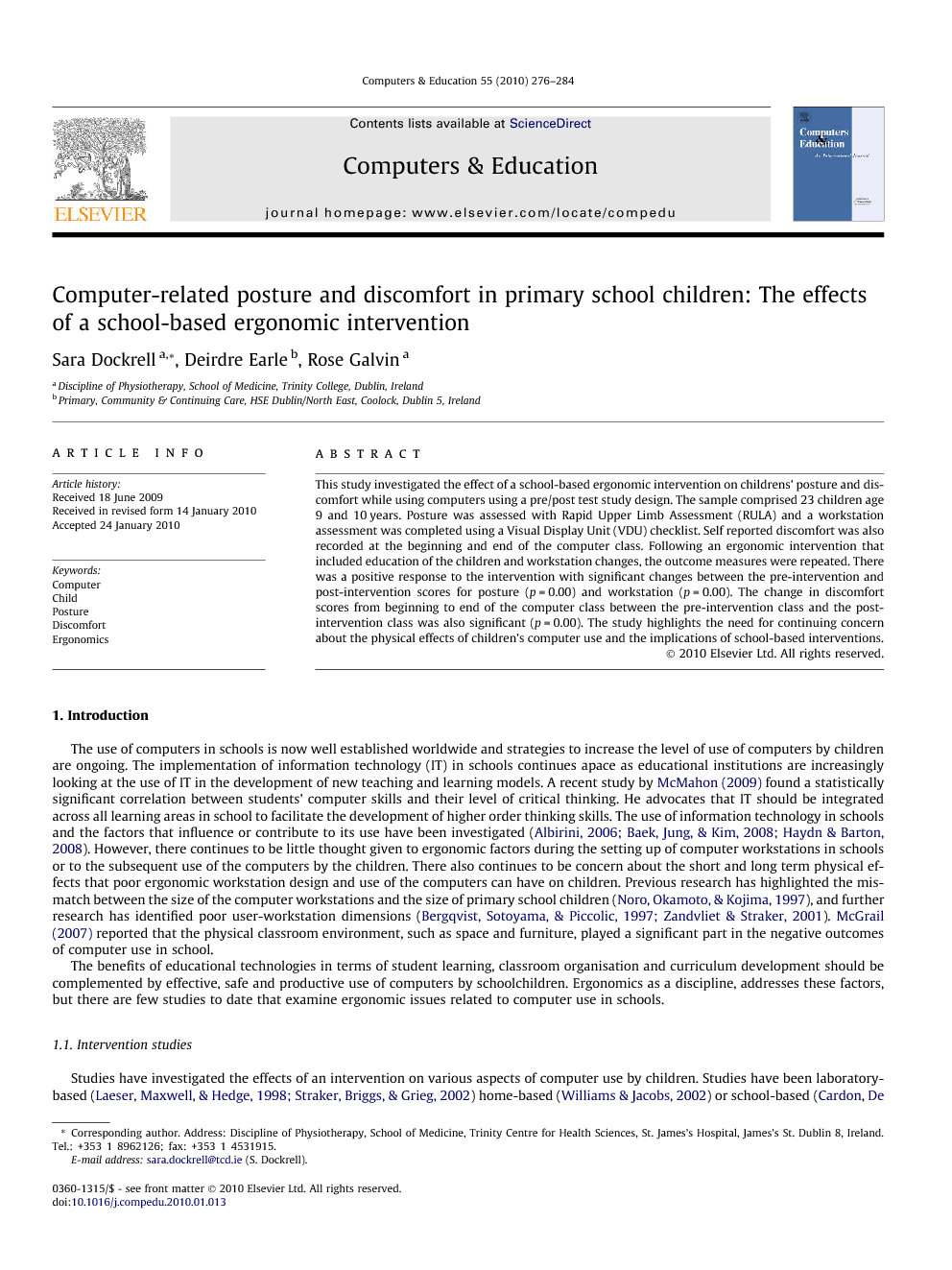 This study investigated the effect of a school-based ergonomic intervention on childrens’ posture and discomfort while using computers using a pre/post test study design. The sample comprised 23 children age 9 and 10 years. Posture was assessed with Rapid Upper Limb Assessment (RULA) and a workstation assessment was completed using a Visual Display Unit (VDU) checklist. Self reported discomfort was also recorded at the beginning and end of the computer class. Following an ergonomic intervention that included education of the children and workstation changes, the outcome measures were repeated. There was a positive response to the intervention with significant changes between the pre-intervention and post-intervention scores for posture (p = 0.00) and workstation (p = 0.00). The change in discomfort scores from beginning to end of the computer class between the pre-intervention class and the post-intervention class was also significant (p = 0.00). The study highlights the need for continuing concern about the physical effects of children’s computer use and the implications of school-based interventions.

The use of computers in schools is now well established worldwide and strategies to increase the level of use of computers by children are ongoing. The implementation of information technology (IT) in schools continues apace as educational institutions are increasingly looking at the use of IT in the development of new teaching and learning models. A recent study by McMahon (2009) found a statistically significant correlation between students’ computer skills and their level of critical thinking. He advocates that IT should be integrated across all learning areas in school to facilitate the development of higher order thinking skills. The use of information technology in schools and the factors that influence or contribute to its use have been investigated (Albirini, 2006, Baek et al., 2008 and Haydn and Barton, 2008). However, there continues to be little thought given to ergonomic factors during the setting up of computer workstations in schools or to the subsequent use of the computers by the children. There also continues to be concern about the short and long term physical effects that poor ergonomic workstation design and use of the computers can have on children. Previous research has highlighted the mismatch between the size of the computer workstations and the size of primary school children (Noro, Okamoto, & Kojima, 1997), and further research has identified poor user-workstation dimensions (Bergqvist et al., 1997 and Zandvliet and Straker, 2001). McGrail (2007) reported that the physical classroom environment, such as space and furniture, played a significant part in the negative outcomes of computer use in school. The benefits of educational technologies in terms of student learning, classroom organisation and curriculum development should be complemented by effective, safe and productive use of computers by schoolchildren. Ergonomics as a discipline, addresses these factors, but there are few studies to date that examine ergonomic issues related to computer use in schools. 1.1. Intervention studies Studies have investigated the effects of an intervention on various aspects of computer use by children. Studies have been laboratory-based (Laeser et al., 1998 and Straker et al., 2002) home-based (Williams & Jacobs, 2002) or school-based (Cardon et al., 2000, Geldhof et al., 2006 and Rowe and Jacobs, 2002). Some positive outcomes of ergonomic interventions in children have been demonstrated. The outcome measures included knowledge (Cardon et al., 2000, Geldhof et al., 2006, Rowe and Jacobs, 2002, Shinn et al., 2002 and Williams and Jacobs, 2002) and behaviour (Geldhof et al., 2006 and Williams and Jacobs, 2002). Interventions have comprised a single session of verbal instruction and demonstration (Williams & Jacobs, 2002), a 12-min education session (Rowe & Jacobs, 2002), a 6-week back care education programme (Cardon et al., 2000), and a 2-year multifactorial intervention (Geldhof et al., 2006). Williams and Jacobs (2002) carried out a home-based education intervention and investigated its effects on knowledge and sitting posture of six children (mean age 12.7) and their parents. They concluded that knowledge of ergonomically correct computer use improved but that sitting posture did not improve following the intervention. Rowe and Jacobs (2002) in a school-based 12-min intervention programme with 19 children (mean age 11.6) reported that the intervention improved knowledge of correct computing habits. Similarly, Shinn et al. (2002) found that ergonomic knowledge can increase as a result of a school-based education intervention. They mention that the environment should also improve to allow the children to put what they have learned in the education session into practice. Geldhof et al. (2006) investigated the effects of a school-based back education programme on 193 children who were 9–11 years old. The study also included 172 controls. They reported that the childrens’ back posture knowledge and observed postural behaviour improved as a result of the intervention, but there was no effect on back and neck pain in girls, although there was a trend for decreased pain among the boys. They concluded that back posture education as part of the school curriculum was an effective way to teach back care to children. With these issues in mind, the current study set out to investigate the effect of an ergonomic intervention on the posture and discomfort of school children. Some aspects of the intervention were similar to other studies in that it was educational in nature and was school-based, as this has been recommended by previous authors (Geldhof et al., 2006). In addition to the educational intervention, the current study included the assessment of the changes implemented to the workstations that were used by the children in school so that they could put their new knowledge into practice. 1.2. Aims and objectives The main aim of the study was to assess the effect of an ergonomic intervention on the posture and discomfort of primary school children while working at computers in school. The objectives were to: (1) assess primary school childrens’ posture at a computer; (2) record discomfort levels before and after computer use; (3) assess computer workstations; (4) plan and implement an intervention programme; (5) compare posture pre and post-intervention; (6) compare the levels of discomfort pre and post-intervention; and (7) compare computer workstations pre and post-intervention.

The study highlights the need for continuing concern about the physical effects of children’s computer use and the implications of school-based interventions. Computer use is becoming a routine part of everyday school life. As it is still a relatively new phenomenon, it is important that children gain a rounded education in the use of computers. While it is widely acknowledged that there are numerous advantages to the user in terms of the accessibility of information, there are also ergonomic factors that need to be considered. Care must be taken to marry the benefits of computer use in schools with the optimal environment for physical and psychological comfort. Children in primary school tend to work at computers in school for relatively short periods of time yet there is evidence that even this can cause discomfort. More importantly is the fact that children are learning work practices and habits that will carry through to home computer use and through to adulthood when they will be spending considerably longer periods of time at computers. This is one of the first studies that has conducted a school-based intervention aimed at improving posture and decreasing musculoskeletal discomfort while using computers and the results indicate that the response was quite positive. While the psychological impact of postural discomfort was not examined in this study, implementation of a programme such as the one described in this paper may contribute to increased educational productivity and satisfaction among schoolchildren. This concept needs to be examined in future research. While lack of funding limits some ergonomic adjustments, it is important to educate both teachers and children on methods to maximise the space and resources available to them. Further larger RCT’s, including collaborations from both ergonomists and educational researchers, examining schoolchildren of different ages are warranted to further explore the impact of computer use on childrens’ posture and discomfort.