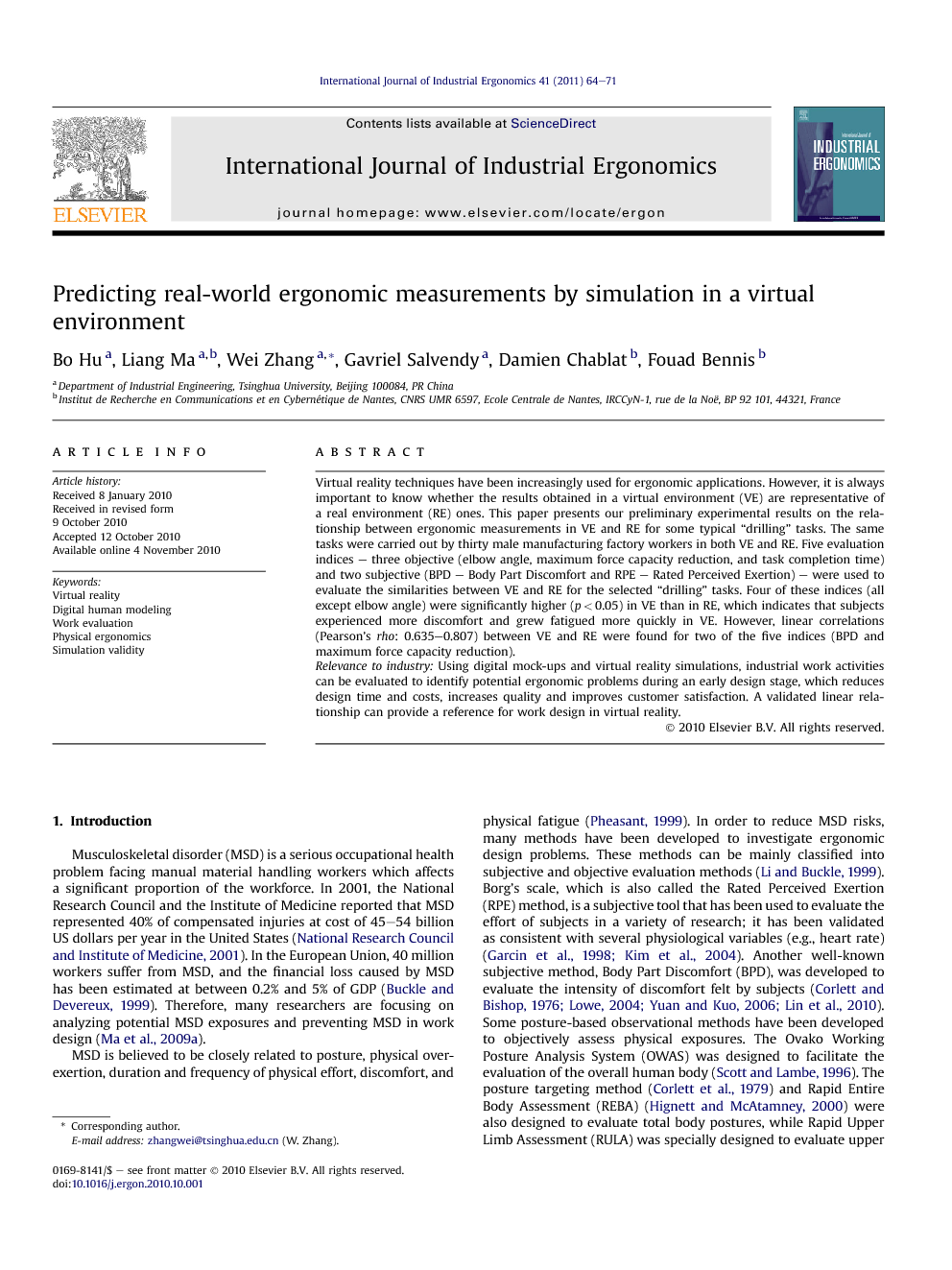 Virtual reality techniques have been increasingly used for ergonomic applications. However, it is always important to know whether the results obtained in a virtual environment (VE) are representative of a real environment (RE) ones. This paper presents our preliminary experimental results on the relationship between ergonomic measurements in VE and RE for some typical “drilling” tasks. The same tasks were carried out by thirty male manufacturing factory workers in both VE and RE. Five evaluation indices – three objective (elbow angle, maximum force capacity reduction, and task completion time) and two subjective (BPD – Body Part Discomfort and RPE – Rated Perceived Exertion) – were used to evaluate the similarities between VE and RE for the selected “drilling” tasks. Four of these indices (all except elbow angle) were significantly higher (p < 0.05) in VE than in RE, which indicates that subjects experienced more discomfort and grew fatigued more quickly in VE. However, linear correlations (Pearson’s rho: 0.635–0.807) between VE and RE were found for two of the five indices (BPD and maximum force capacity reduction). Relevance to industry Using digital mock-ups and virtual reality simulations, industrial work activities can be evaluated to identify potential ergonomic problems during an early design stage, which reduces design time and costs, increases quality and improves customer satisfaction. A validated linear relationship can provide a reference for work design in virtual reality.

Musculoskeletal disorder (MSD) is a serious occupational health problem facing manual material handling workers which affects a significant proportion of the workforce. In 2001, the National Research Council and the Institute of Medicine reported that MSD represented 40% of compensated injuries at cost of 45–54 billion US dollars per year in the United States (National Research Council and Institute of Medicine, 2001). In the European Union, 40 million workers suffer from MSD, and the financial loss caused by MSD has been estimated at between 0.2% and 5% of GDP (Buckle and Devereux, 1999). Therefore, many researchers are focusing on analyzing potential MSD exposures and preventing MSD in work design (Ma et al., 2009a). MSD is believed to be closely related to posture, physical overexertion, duration and frequency of physical effort, discomfort, and physical fatigue (Pheasant, 1999). In order to reduce MSD risks, many methods have been developed to investigate ergonomic design problems. These methods can be mainly classified into subjective and objective evaluation methods (Li and Buckle, 1999). Borg’s scale, which is also called the Rated Perceived Exertion (RPE) method, is a subjective tool that has been used to evaluate the effort of subjects in a variety of research; it has been validated as consistent with several physiological variables (e.g., heart rate) (Garcin et al., 1998 and Kim et al., 2004). Another well-known subjective method, Body Part Discomfort (BPD), was developed to evaluate the intensity of discomfort felt by subjects (Corlett and Bishop, 1976, Lowe, 2004, Yuan and Kuo, 2006 and Lin et al., 2010). Some posture-based observational methods have been developed to objectively assess physical exposures. The Ovako Working Posture Analysis System (OWAS) was designed to facilitate the evaluation of the overall human body (Scott and Lambe, 1996). The posture targeting method (Corlett et al., 1979) and Rapid Entire Body Assessment (REBA) (Hignett and McAtamney, 2000) were also designed to evaluate total body postures, while Rapid Upper Limb Assessment (RULA) was specially designed to evaluate upper body postures (McAtamney and Corlett, 1993 and Bao et al., 2007). However, in these conventional methods, evaluation must be conducted in the field, which requires a great deal of effort and an expensive physical mock-up. Digital human modeling (DHM) and virtual human simulation (e.g., 3DSSPP™, EAI Jack®, RAMSIS) have been created to facilitate ergonomic evaluations (Ma et al., 2009a). Using these tools, the visual scope and reach envelope of users representing specific populations can be analyzed (e.g., EAI Jack®) (Chaffin et al., 2001). Some DHM tools can calculate the biomechanical attributes of manual handling operations (e.g., Anybody® Modeling System, 3DSSPP™) and predict physical fatigue and potential disorder risk. These analytical tools can be used to identify and mitigate ergonomic problems of a designed product, workstation, or job in order to promote human considerations and protect the users, during an early stage of design. Virtual human simulation provides a quick, virtual representation of human beings in a simulated working environment. Physical mock-up is no longer necessary, and multiple aspects can be assessed with rapid computational efficiency. One of the main issues with using virtual human simulation in some applications is that the movement or motion is obtained through inverse kinematics, which gives the virtual human robot-like, unnatural behavior (Chaffin and Erig, 1991). Virtual reality (VR) technology is able to provide an immersive working environment. Several peripheral devices such as motion tracking systems and haptic interfaces have been invented to provide different ways for the user and the VR system to interact. Buck (1998) used VR technology and DHM tools to enable human participation in industrial system design evaluation. VR has also been used in ergonomics applications to assess different aspects of manual handling operations (Whitman et al., 2004, Jayaram et al., 2006 and Wang et al., 2007). The aim of integrating ergonomic evaluation methods into VR is to facilitate the work design process, enhance design efficiency, and lower the design cost. Hypothetically, if a virtual environment could provide 100% fidelity (meaning that a user would feel exactly the same as in the real world, but not possible due to technical constraints), then the workload and performance in VE should be the same as in a real environment. Practically, however, the main concern is whether the indices in VE, which have a limited level of fidelity due to economic and technical constraints, are consistent with the indices in RE. To address this question, we designed and conducted experiments on a VR system with only stereo visual feedback (head-mounted display) and motion control input (motion tracking device). Our setup was equivalent to a typical system for entry-level VR users. Higher-end VR systems with more immersive audio/video displays and more feedback channels (such as tactic and haptic) are believed to yield results that are more consistent with RE than this entry-level setup. In this experimental study, three objective indices (elbow angle, maximum force reduction rate, task completion time) and two subjective evaluation indices (BPD, RPE) were used to evaluate different aspects of task performance in both virtual and reality environments (VE and RE).

Objective and subjective indices were measured in RE and VE during a specific task and compared. Elbow angle was found to differ significantly between VE and RE, but the difference was small in terms of traditional ergonomic posture analysis. Significant differences were found for MFCR, TCT, BPD, and RPE. All of the differences were consistent with the fact that task performance in VE yields a larger force reduction rate, longer performing time, greater level of discomfort, and higher perceived exertion. On the other hand, the measurements of BPD and MFCR in VE were fairly well correlated with their corresponding measurements in RE. It is not currently known how VR fidelity affects these differences and correlations, and this influence should be further explored.