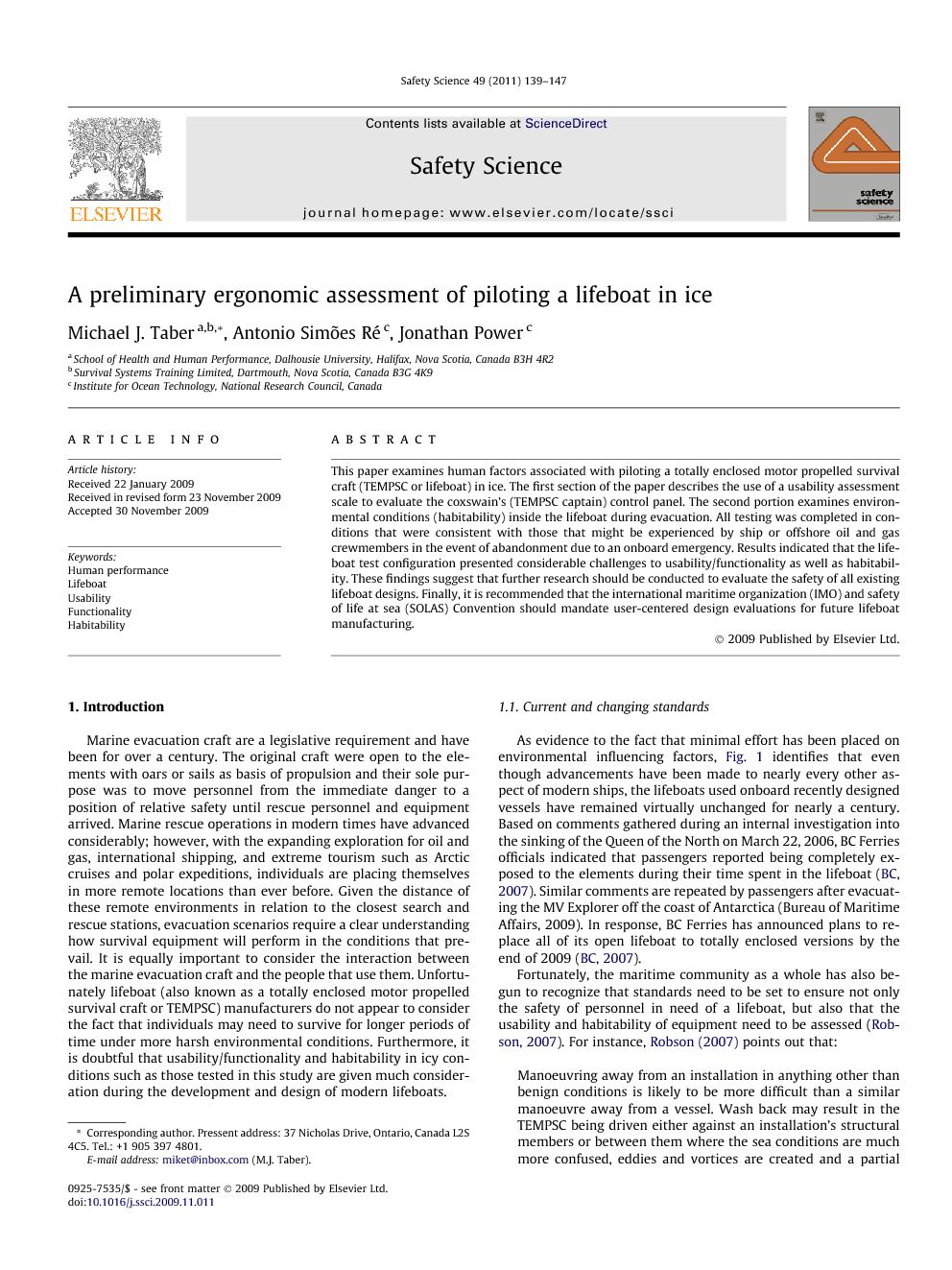 This paper examines human factors associated with piloting a totally enclosed motor propelled survival craft (TEMPSC or lifeboat) in ice. The first section of the paper describes the use of a usability assessment scale to evaluate the coxswain’s (TEMPSC captain) control panel. The second portion examines environmental conditions (habitability) inside the lifeboat during evacuation. All testing was completed in conditions that were consistent with those that might be experienced by ship or offshore oil and gas crewmembers in the event of abandonment due to an onboard emergency. Results indicated that the lifeboat test configuration presented considerable challenges to usability/functionality as well as habitability. These findings suggest that further research should be conducted to evaluate the safety of all existing lifeboat designs. Finally, it is recommended that the international maritime organization (IMO) and safety of life at sea (SOLAS) Convention should mandate user-centered design evaluations for future lifeboat manufacturing.

Marine evacuation craft are a legislative requirement and have been for over a century. The original craft were open to the elements with oars or sails as basis of propulsion and their sole purpose was to move personnel from the immediate danger to a position of relative safety until rescue personnel and equipment arrived. Marine rescue operations in modern times have advanced considerably; however, with the expanding exploration for oil and gas, international shipping, and extreme tourism such as Arctic cruises and polar expeditions, individuals are placing themselves in more remote locations than ever before. Given the distance of these remote environments in relation to the closest search and rescue stations, evacuation scenarios require a clear understanding how survival equipment will perform in the conditions that prevail. It is equally important to consider the interaction between the marine evacuation craft and the people that use them. Unfortunately lifeboat (also known as a totally enclosed motor propelled survival craft or TEMPSC) manufacturers do not appear to consider the fact that individuals may need to survive for longer periods of time under more harsh environmental conditions. Furthermore, it is doubtful that usability/functionality and habitability in icy conditions such as those tested in this study are given much consideration during the development and design of modern lifeboats. 1.1. Current and changing standards As evidence to the fact that minimal effort has been placed on environmental influencing factors, Fig. 1 identifies that even though advancements have been made to nearly every other aspect of modern ships, the lifeboats used onboard recently designed vessels have remained virtually unchanged for nearly a century. Based on comments gathered during an internal investigation into the sinking of the Queen of the North on March 22, 2006, BC Ferries officials indicated that passengers reported being completely exposed to the elements during their time spent in the lifeboat (BC, 2007). Similar comments are repeated by passengers after evacuating the MV Explorer off the coast of Antarctica (Bureau of Maritime Affairs, 2009). In response, BC Ferries has announced plans to replace all of its open lifeboat to totally enclosed versions by the end of 2009 (BC, 2007).Fortunately, the maritime community as a whole has also begun to recognize that standards need to be set to ensure not only the safety of personnel in need of a lifeboat, but also that the usability and habitability of equipment need to be assessed (Robson, 2007). For instance, Robson (2007) points out that: Manoeuvring away from an installation in anything other than benign conditions is likely to be more difficult than a similar manoeuvre away from a vessel. Wash back may result in the TEMPSC being driven either against an installation’s structural members or between them where the sea conditions are much more confused, eddies and vortices are created and a partial loss of buoyancy may occur. Extricating a battened down TEMPSC from such a situation will place great demands on the coxswain, possibly over and above those in which he has been trained (p. 14). However compelling Robson’s statement might be, the greatest cry for change has been focused primarily on lifeboat release mechanisms, self-righting capabilities and personnel size limitations (Kozey et al., 2005, Peachey and Pollard, 2006 and Reilly et al., 2005). Unfortunately, reports addressing the conditions inside the lifeboat as well as performance in icy environments are virtually none existent. The technology of the shipping industry has traditionally been governed by specification-based regulations (i.e. safety of life at sea – SOLAS), which for marine related matters was inherited by the offshore petroleum industry. As a consequence, both the shipping and offshore petroleum industries are governed, at least in many jurisdictions, by prescriptive specification-based conventions and regulations in matters of marine evacuation. Much of the inherited regulatory apparatus and corresponding evacuation technology is inadequate in terms of its coverage of and utility for northern regions and Arctic. In these circumstances, compliance with regulations and off-the-shelf solutions are inadequate. As the shipping and offshore petroleum industries increase activities in the Arctic and other ice-covered regions, they will have to deal with a host of issues that will require innovative solutions that are unlikely to be fully addressed under existing regulations and existing technical solutions. In such circumstances, developments in cold regions may be most effectively advanced under a goal-based regulatory approach. It was with this goal-based approach in mind that the National Research Council Canada (NRC) initiated a research program aimed at both the engineering and human factors (i.e. ergonomics) problems associated with manoeuvring evacuation craft (i.e. lifeboats) in ice covered waters. Therefore, this paper explores the ergonomic and performance characteristics associated with habitability and piloting a lifeboat/TEMPSC in icy conditions. To direct focus on these two specific areas of interest, the first section of this paper addresses the usability/functionality of a commercially available lifeboat control system, while the second section examines habitability inside the lifeboat to ensure safe conditions exist until rescue services can be provided.

Based on the experience level of boat handling the coxswains used in this study, it is reasonable to conclude that individuals who rarely have the opportunity to drive a lifeboat would undoubtedly find primary task performance difficult even under the most benign conditions. Trial results identified that when navigating through pack ice environments that may be experienced by crews working the North Atlantic or polar regions, the coxswain’s and forward bow hatchway would need to be opened (compromising the watertight integrity of the boat). Opening the hatchways was necessary in order to see over the bow of the lifeboat to avoid hitting shards of ice that would potentially damage the boat’s hull. The results further indicate that both CO and CO2 concentrations would reach unacceptable levels if it were necessary to close the hatches during the evacuation. Environmental conditions such as freezing spray, rain, snow, or high waves as well as toxins or fire on the surface of the water would require that the hatches remain closed to protect the passengers and crew inside the lifeboat. SOLAS and IMO standards require that a lifeboat is equipped with enough compressed air to sustain the entire 20 person crew and engine for a minimum of 10 min, however, once the internal air tanks have been depleted, it is doubtful that the small fresh air ventilation ports would provide enough airflow to compensate for the rapid increase in CO2 noted in these trials. As this study only used three individuals inside the lifeboat, it is reasonable to assume that a fully loaded (20 people) life capsule’s interior air quality would become toxic in a much shorter time period than would be necessary for rescue crews to arrive. Furthermore, it was noted that estimated temperatures inside the lifeboat would be in excess of 30 °C within the first 60 min of waiting for rescue. Again this increase is based on the heat produced by the engine, electrical equipment, and the three coxswains in a relatively cool exterior climate. A temperature of 30 °C may at first seem like a blessing in a cold climate such as the Arctic; however, during abandonment, the evacuees are typically required to don warm clothing and preferably an immersion suit to protect them if for some reason they are exposed to the cold water. Placed in this context, 30 °C does not seem nearly as advantageous and may even induce heat stress. Without further study completed in different hull and fresh air intake designs, it is difficult to recommend a solution to the CO, CO2, and temperature concerns. A combination of open/closed hatchways may alleviate the all three issues, while inducing others such as water infiltration. Additionally, although beyond the scope of this study, heat stress combined with a continuously moving environment in which nearly all of the evacuees will have no visual reference may lead to a situation in which motion sickness becomes a considerable concern for many of the individuals waiting several days to be rescued. Although meeting both the IMO and SOLAS regulations as well as being used in several marine settings around the world, this commercially available lifeboat design rated between unacceptable and possibly dangerous in almost all of the critical aspects of manoeuvring the lifeboat to a safe position. As the primary focus discussed in this paper is directed at the piloting and habitability of the lifeboat, the results clearly indicate that this particular design falls well short of achieving its goals.