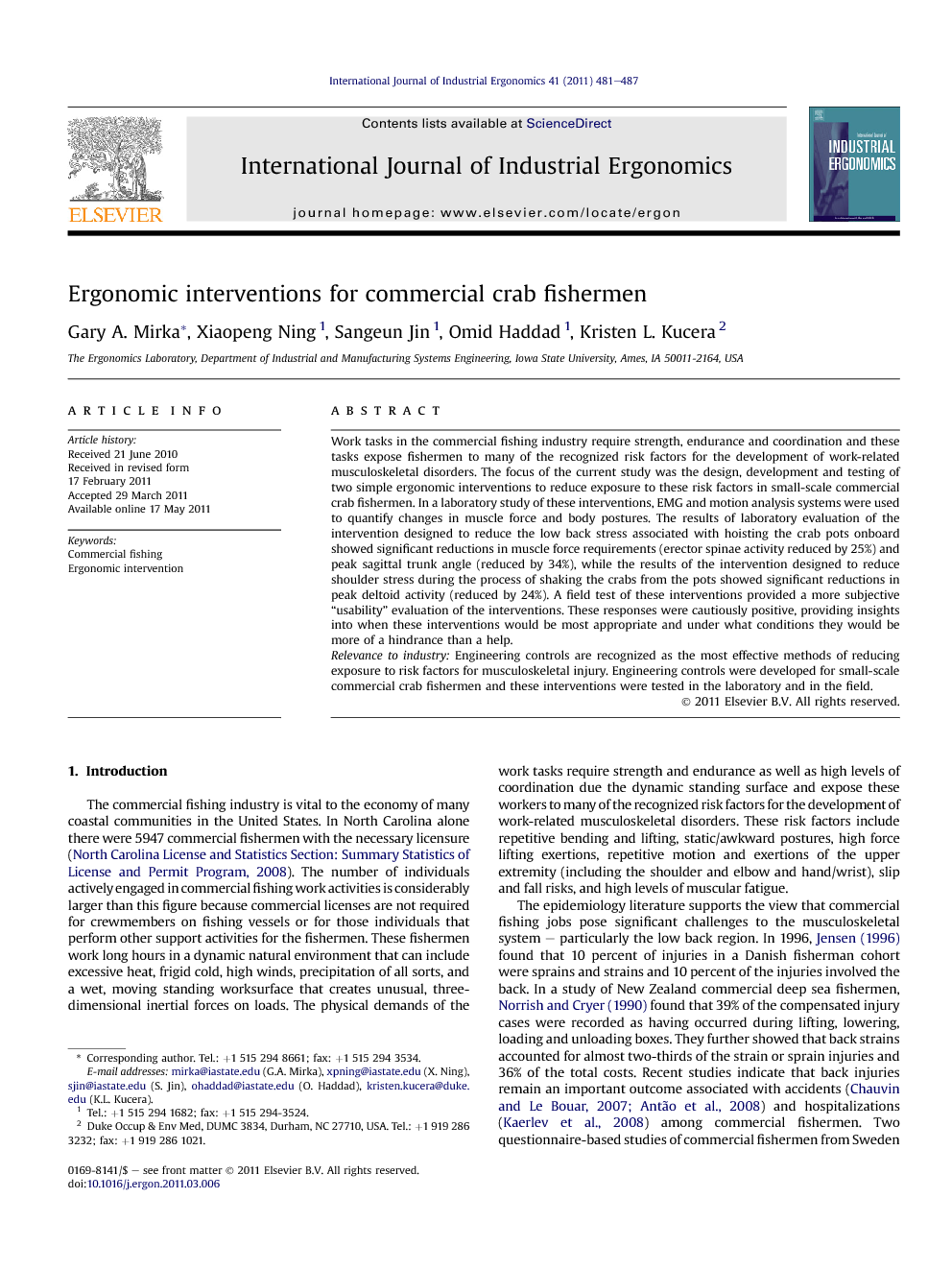 Work tasks in the commercial fishing industry require strength, endurance and coordination and these tasks expose fishermen to many of the recognized risk factors for the development of work-related musculoskeletal disorders. The focus of the current study was the design, development and testing of two simple ergonomic interventions to reduce exposure to these risk factors in small-scale commercial crab fishermen. In a laboratory study of these interventions, EMG and motion analysis systems were used to quantify changes in muscle force and body postures. The results of laboratory evaluation of the intervention designed to reduce the low back stress associated with hoisting the crab pots onboard showed significant reductions in muscle force requirements (erector spinae activity reduced by 25%) and peak sagittal trunk angle (reduced by 34%), while the results of the intervention designed to reduce shoulder stress during the process of shaking the crabs from the pots showed significant reductions in peak deltoid activity (reduced by 24%). A field test of these interventions provided a more subjective “usability” evaluation of the interventions. These responses were cautiously positive, providing insights into when these interventions would be most appropriate and under what conditions they would be more of a hindrance than a help.

This study demonstrated the effectiveness of two ergonomic engineering controls for the reduction of exposure to risk factors for musculoskeletal disorders in commercial crab fishing. Two ergonomic controls were tested in both the laboratory and the field. A ramp system was designed and built to reduce the awkward trunk postures required to lift the crab pots from the water. A boom and hook system was designed and built to eliminate the required lifting force during the process of shaking the crabs from these crab pots. In the laboratory both devices demonstrated significant reductions in the required muscle forces necessary to perform the tasks. In the field, both devices were viewed as positive improvements for select populations (e.g., an older fisherman fishing alone, straight-line crab fishing methods) and valuable insight with regard to further improvements to make these devices more universally useful was gained. Further investigation could provide more data relative to the cost-effectiveness of these and other interventions for these fishermen.