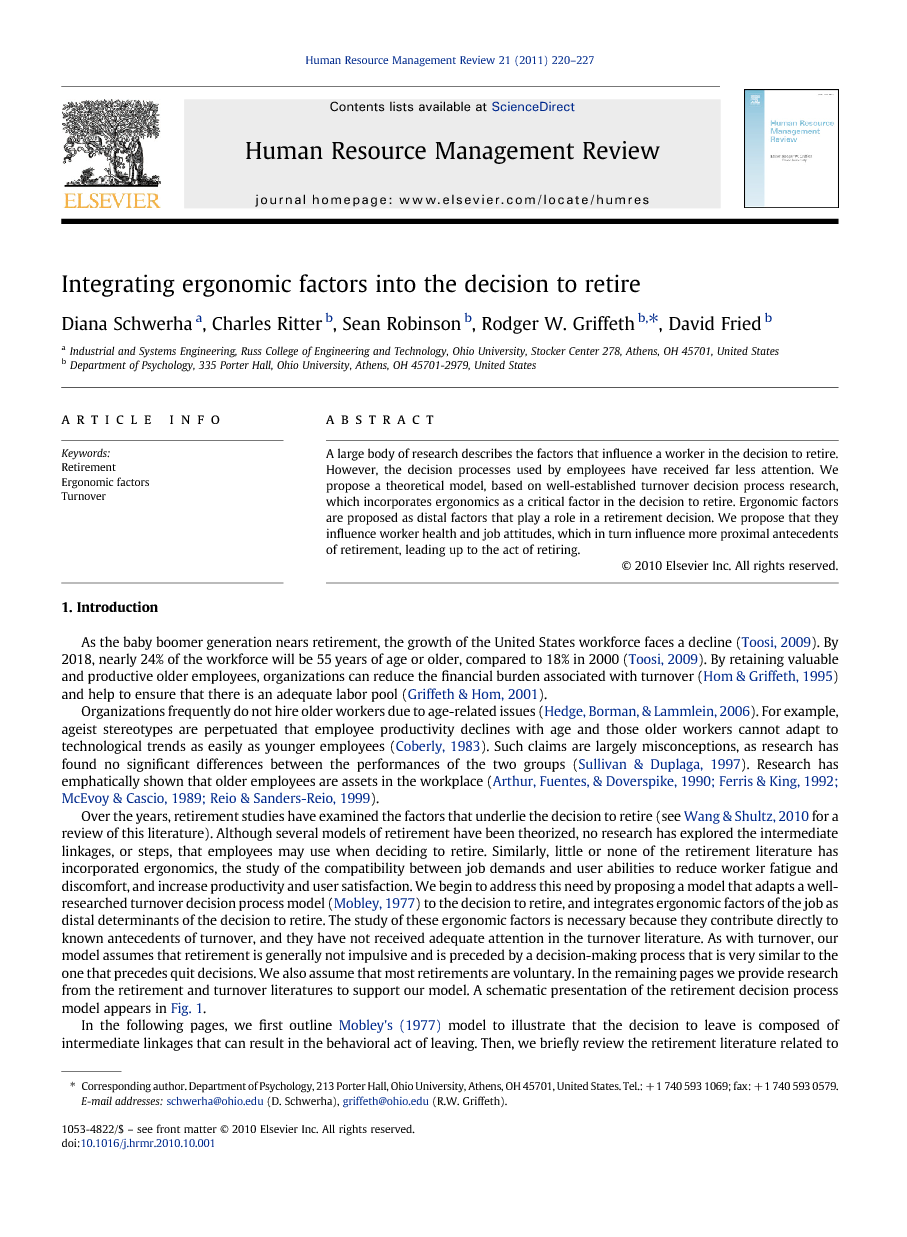 A large body of research describes the factors that influence a worker in the decision to retire. However, the decision processes used by employees have received far less attention. We propose a theoretical model, based on well-established turnover decision process research, which incorporates ergonomics as a critical factor in the decision to retire. Ergonomic factors are proposed as distal factors that play a role in a retirement decision. We propose that they influence worker health and job attitudes, which in turn influence more proximal antecedents of retirement, leading up to the act of retiring.

As the baby boomer generation nears retirement, the growth of the United States workforce faces a decline (Toosi, 2009). By 2018, nearly 24% of the workforce will be 55 years of age or older, compared to 18% in 2000 (Toosi, 2009). By retaining valuable and productive older employees, organizations can reduce the financial burden associated with turnover (Hom & Griffeth, 1995) and help to ensure that there is an adequate labor pool (Griffeth & Hom, 2001). Organizations frequently do not hire older workers due to age-related issues (Hedge, Borman, & Lammlein, 2006). For example, ageist stereotypes are perpetuated that employee productivity declines with age and those older workers cannot adapt to technological trends as easily as younger employees (Coberly, 1983). Such claims are largely misconceptions, as research has found no significant differences between the performances of the two groups (Sullivan & Duplaga, 1997). Research has emphatically shown that older employees are assets in the workplace (Arthur et al., 1990, Ferris and King, 1992, McEvoy and Cascio, 1989 and Reio and Sanders-Reio, 1999). Over the years, retirement studies have examined the factors that underlie the decision to retire (see Wang & Shultz, 2010 for a review of this literature). Although several models of retirement have been theorized, no research has explored the intermediate linkages, or steps, that employees may use when deciding to retire. Similarly, little or none of the retirement literature has incorporated ergonomics, the study of the compatibility between job demands and user abilities to reduce worker fatigue and discomfort, and increase productivity and user satisfaction. We begin to address this need by proposing a model that adapts a well-researched turnover decision process model (Mobley, 1977) to the decision to retire, and integrates ergonomic factors of the job as distal determinants of the decision to retire. The study of these ergonomic factors is necessary because they contribute directly to known antecedents of turnover, and they have not received adequate attention in the turnover literature. As with turnover, our model assumes that retirement is generally not impulsive and is preceded by a decision-making process that is very similar to the one that precedes quit decisions. We also assume that most retirements are voluntary. In the remaining pages we provide research from the retirement and turnover literatures to support our model. A schematic presentation of the retirement decision process model appears in Fig. 1.In the following pages, we first outline Mobley's (1977) model to illustrate that the decision to leave is composed of intermediate linkages that can result in the behavioral act of leaving. Then, we briefly review the retirement literature related to components of our model (note: this is a short snapshot of the retirement literature not intended to be exhaustive. There are much finer recent reviews of this literature. See Wang & Shultz, 2010 for an example of one.). Then, we describe our adaptation of this model to the decision to retire and present research propositions based on previous turnover and retirement research.

By proposing our intermediate linkages model of employee retirement, we hope to bridge the gap between the turnover and the retirement literatures. Further, by incorporating ergonomic factors into the decision to retire, our model introduces an idea that has received little attention. In presenting testable propositions, the present theoretical paper represents a first step in the research process. Because this is a theoretical model that needs to be tested with empirical data we next provide a few ideas for conducting such tests. Research using perceptual ergonomic factors (e.g., Vadlamani, Schwerha, and Griffeth's (2009) Ergonomic Factors Scale (EFS) — an evidence-based tool that will allow employers to improve ergonomic factors in hopes of extending an employee's working life 5 to 10 years.) with Structural Equation Modeling (SEM) represents an enticing idea for testing the full model. However, smaller scale research could test the various propositions in the model. This is a relatively simple conceptual model and it could be expanded by adding both additional mediators and moderators that could be related to work or non-work factors. For example, organizational support is related to organizational commitment (Allen, Shore, & Griffeth, 2003). Willingness to help older employees by changing their working conditions could thus moderate the relationship between negative ergonomic factors and job satisfaction. Other factors such as centrality of work and commitment to leisure activities (e.g., travel, family) might be moderators of the retirement decision (Kubicek, Korunka, Hoonakker, & Raymo, 2010). Schmidt and Lee (2008) verified that work centrality and commitment to leisure activities were unique predictors of retirement intentions where affective organizational commitment merely predicted turnover intentions. Subjective norms such as opinions of friends or family could be added as the model is developed. For reasons of complexity, we have also not included potential moderating effects of age and tenure within different stages of the model.