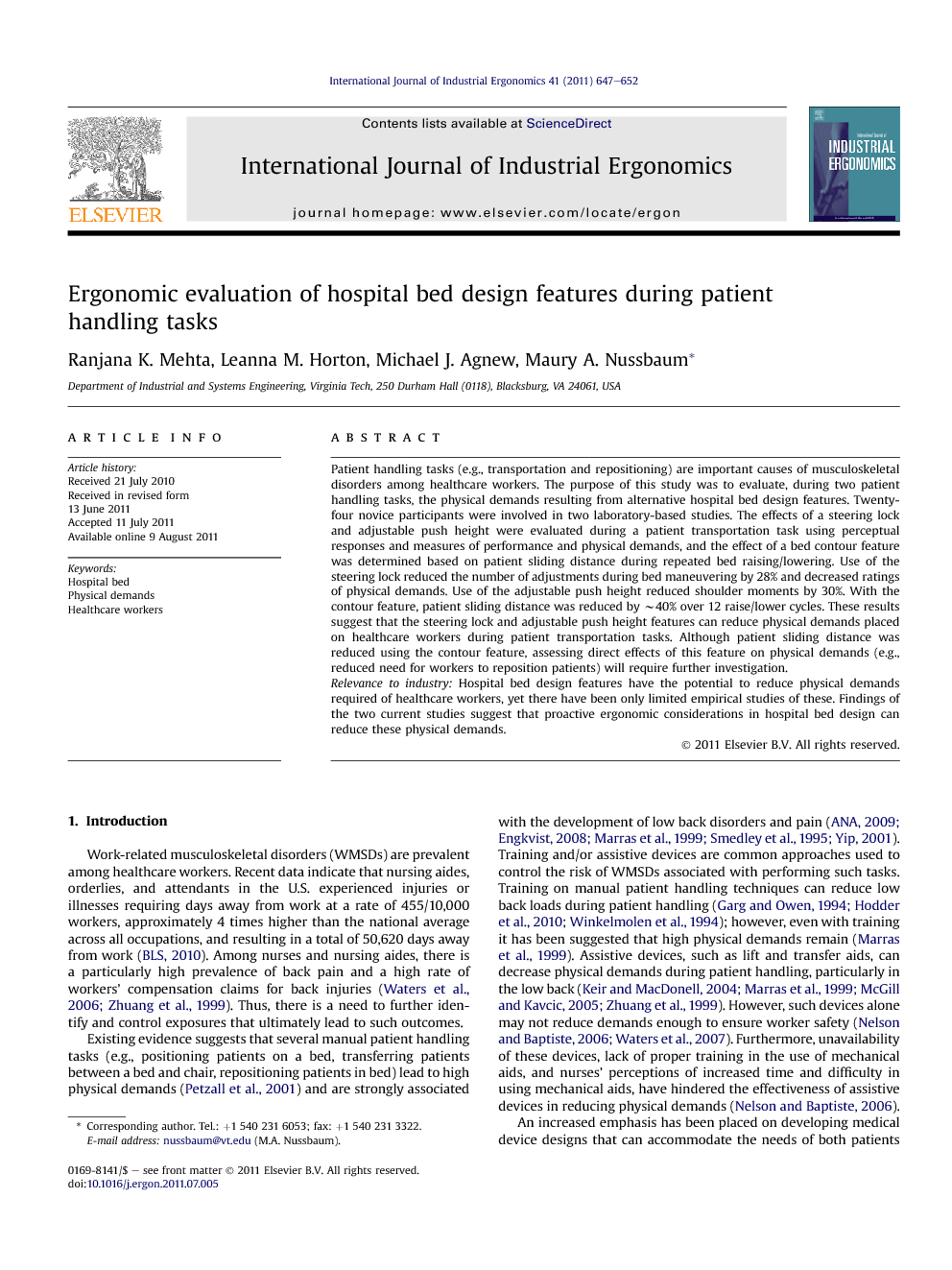 Patient handling tasks (e.g., transportation and repositioning) are important causes of musculoskeletal disorders among healthcare workers. The purpose of this study was to evaluate, during two patient handling tasks, the physical demands resulting from alternative hospital bed design features. Twenty-four novice participants were involved in two laboratory-based studies. The effects of a steering lock and adjustable push height were evaluated during a patient transportation task using perceptual responses and measures of performance and physical demands, and the effect of a bed contour feature was determined based on patient sliding distance during repeated bed raising/lowering. Use of the steering lock reduced the number of adjustments during bed maneuvering by 28% and decreased ratings of physical demands. Use of the adjustable push height reduced shoulder moments by 30%. With the contour feature, patient sliding distance was reduced by ∼40% over 12 raise/lower cycles. These results suggest that the steering lock and adjustable push height features can reduce physical demands placed on healthcare workers during patient transportation tasks. Although patient sliding distance was reduced using the contour feature, assessing direct effects of this feature on physical demands (e.g., reduced need for workers to reposition patients) will require further investigation.

Work-related musculoskeletal disorders (WMSDs) are prevalent among healthcare workers. Recent data indicate that nursing aides, orderlies, and attendants in the U.S. experienced injuries or illnesses requiring days away from work at a rate of 455/10,000 workers, approximately 4 times higher than the national average across all occupations, and resulting in a total of 50,620 days away from work (BLS, 2010). Among nurses and nursing aides, there is a particularly high prevalence of back pain and a high rate of workers’ compensation claims for back injuries (Waters et al., 2006 and Zhuang et al., 1999). Thus, there is a need to further identify and control exposures that ultimately lead to such outcomes. Existing evidence suggests that several manual patient handling tasks (e.g., positioning patients on a bed, transferring patients between a bed and chair, repositioning patients in bed) lead to high physical demands (Petzall et al., 2001) and are strongly associated with the development of low back disorders and pain (American Nurses Association, 2009, Engkvist, 2008, Marras et al., 1999, Smedley et al., 1995 and Yip, 2001). Training and/or assistive devices are common approaches used to control the risk of WMSDs associated with performing such tasks. Training on manual patient handling techniques can reduce low back loads during patient handling (Garg and Owen, 1994, Hodder et al., 2010 and Winkelmolen et al., 1994); however, even with training it has been suggested that high physical demands remain (Marras et al., 1999). Assistive devices, such as lift and transfer aids, can decrease physical demands during patient handling, particularly in the low back (Keir and MacDonell, 2004, Marras et al., 1999, McGill and Kavcic, 2005 and Zhuang et al., 1999). However, such devices alone may not reduce demands enough to ensure worker safety (Nelson and Baptiste, 2006 and Waters et al., 2007). Furthermore, unavailability of these devices, lack of proper training in the use of mechanical aids, and nurses’ perceptions of increased time and difficulty in using mechanical aids, have hindered the effectiveness of assistive devices in reducing physical demands (Nelson and Baptiste, 2006). An increased emphasis has been placed on developing medical device designs that can accommodate the needs of both patients and healthcare workers (Martin et al., 2008). In the context of ergonomics, a few studies have indicated that design features of hospital beds can reduce physical demands during hospital bed use and related activities. For example, hospital bed heights and brake pedal location can influence spinal loads during patient handling and transportation (De Looze et al., 1994 and Kim et al., 2008). Specifically, during in-bed patient transportation, perceived physical effort difficulty is substantially affected by wheel arrangements (Petzall and Petzall, 2003) and also by steering assistance features (i.e., a retractable 5th wheel and front caster locks) among midrange medical/surgical beds (Kim et al., 2008). Front caster steering locks are designed to minimize sideways drifting while pushing hospital beds, which can otherwise require readjustments to be made to the direction of the bed. When sideways drifting occurs, often the bed needs to be stopped and adjusted to the desired direction, resulting in high push/pull forces and asymmetrical spinal loading. Furthermore, when beds are stopped from moving to be adjusted, the initial start-up forces may be twice as much as in the sustained phase (Ciriello et al., 2001). These remedial actions (i.e. adjustments) to improve bed maneuverability increase physical demands (specifically low back spinal loads). Thus, a steering lock can potentially reduce the demands placed on workers and increase the efficiency with which they can maneuver beds. Of note, prior studies on steering locks focused mainly on transportation beds and it is unknown whether comparable effects will be found for other bed types with different masses. For example, Petzall and Petzall (2003) employed transportation beds with mass ∼94 kg, while Kim et al. (2008) evaluated beds up to 214 kg. Several studies have reported beneficial effects of handle heights on low back and shoulder loads during cart pushing and pulling (Hoozemans et al., 2004 and Resnick and Chaffin, 1995). Specifically, it was found that pushing carts with handle heights of 1.09 m resulted in lower spinal compressive forces compared to handle heights of 0.66 m and 1.52 m (Lee et al., 1991). However, it remains to be determined if adjustable handle heights in hospital beds can reduce shoulder and spinal loads during patient transportation. Though adopted and marketed by manufacturers, several other design features also remain to be formally evaluated in terms of physical demands. One such feature involves an adjustable contour, which enables patients or healthcare workers to easily configure the bed in different positions (e.g., sitting, knee-raising, etc). A contour feature can reduce patient sliding (toward the bed foot) while beds are raised/lowered during the course of day, and this in turn can minimize the need to reposition patients in bed. As repositioning patients is associated with high spinal compressive forces (Marras et al., 1999) and is considered to be a high-risk task for injuries (Badger, 1981), the use of a contour feature can potentially reduce the demands and risks placed on healthcare workers. The aim of this study was to assess the effectiveness, from an ergonomics perspective, of a steering assistance feature (i.e., front caster lock), an adjustable push height feature, and a bed contour feature at reducing both directly measurable and perceived task-related physical demands. Fig. 1 illustrates the patient handling tasks, related risk factors, and study measures used to evaluate the hospital bed design features. Two commercially-available “Medical/Surgical” hospital beds, from different North American hospital bed manufacturers, were used without modification to quantify the effects of these design features. A combination of objective and subjective measures was employed to assess physical demands associated with the design features of interest. It was hypothesized: (1) the use of a steering lock will reduce the number of adjustments made by users in a patient transportation task and result in lower perceptions of physical demands, (2) an adjustable push height will result in lower shoulder and torso moments generated during initial bed movement, and (3) a contour feature will reduce patient sliding during repeated bed raising/lowering.

Hospital bed design features have the potential to alleviate physical demands placed on healthcare workers, yet there have been only limited empirical studies of these features. In the patient transportation study, the use of a steering lock reduced the number of adjustments and decreased perceived physical demands during bed maneuvering. Additionally, the adjustable push height reduced shoulder moments during an in-room bed start-up task. In the bed contour study, the contour feature reduced patient sliding distance with repeated bed raising/lowering, which can potentially reduce the demands placed on healthcare workers to reposition them. Results of the two studies suggest that proactive ergonomic considerations in hospital bed design can reduce physical demands placed on healthcare workers.