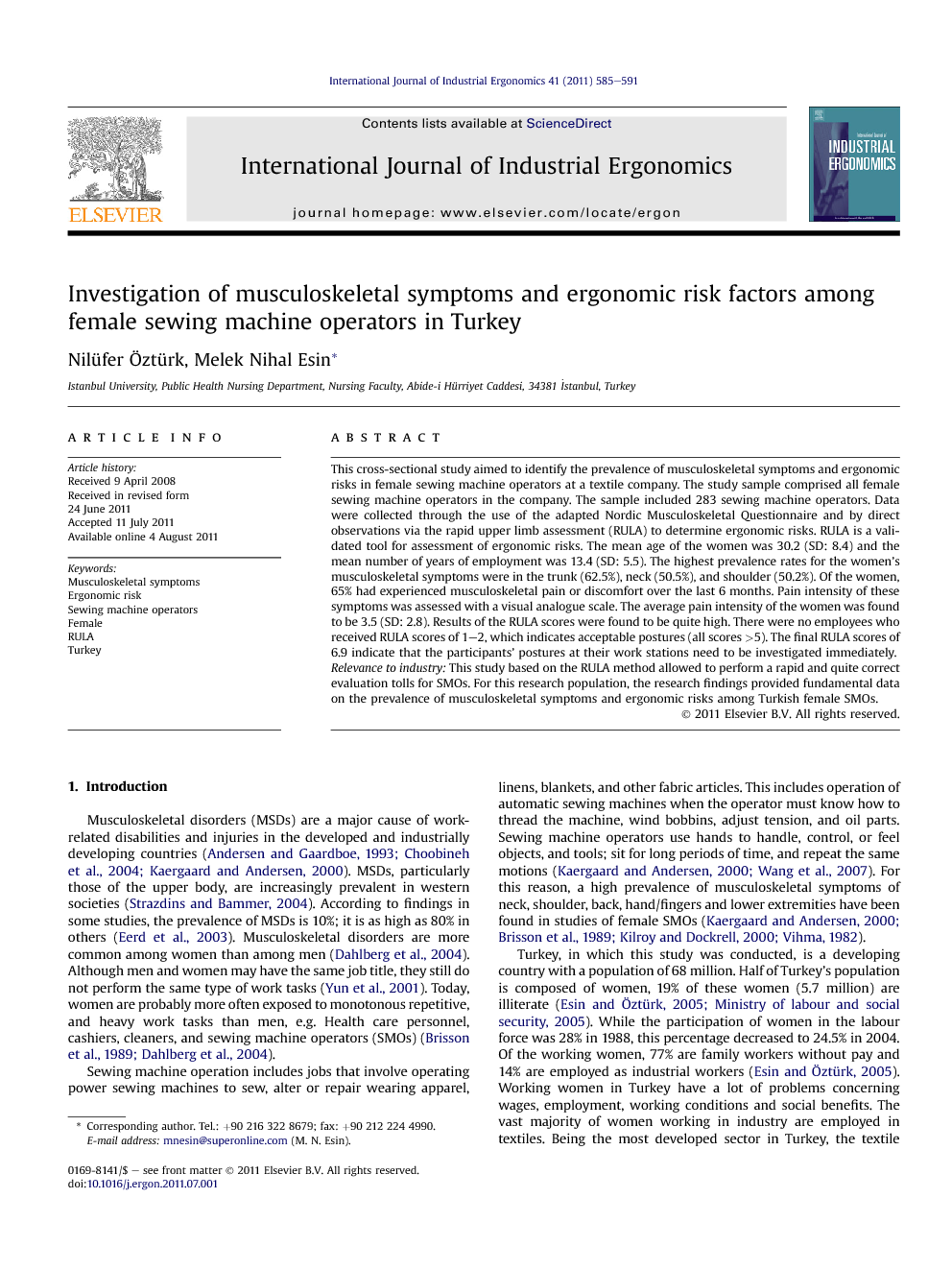 This cross-sectional study aimed to identify the prevalence of musculoskeletal symptoms and ergonomic risks in female sewing machine operators at a textile company. The study sample comprised all female sewing machine operators in the company. The sample included 283 sewing machine operators. Data were collected through the use of the adapted Nordic Musculoskeletal Questionnaire and by direct observations via the rapid upper limb assessment (RULA) to determine ergonomic risks. RULA is a validated tool for assessment of ergonomic risks. The mean age of the women was 30.2 (SD: 8.4) and the mean number of years of employment was 13.4 (SD: 5.5). The highest prevalence rates for the women’s musculoskeletal symptoms were in the trunk (62.5%), neck (50.5%), and shoulder (50.2%). Of the women, 65% had experienced musculoskeletal pain or discomfort over the last 6 months. Pain intensity of these symptoms was assessed with a visual analogue scale. The average pain intensity of the women was found to be 3.5 (SD: 2.8). Results of the RULA scores were found to be quite high. There were no employees who received RULA scores of 1–2, which indicates acceptable postures (all scores >5). The final RULA scores of 6.9 indicate that the participants’ postures at their work stations need to be investigated immediately.

Musculoskeletal disorders (MSDs) are a major cause of work-related disabilities and injuries in the developed and industrially developing countries (Andersen and Gaardboe, 1993, Choobineh et al., 2004 and Kaergaard and Andersen, 2000). MSDs, particularly those of the upper body, are increasingly prevalent in western societies (Strazdins and Bammer, 2004). According to findings in some studies, the prevalence of MSDs is 10%; it is as high as 80% in others (Eerd et al., 2003). Musculoskeletal disorders are more common among women than among men (Dahlberg et al., 2004). Although men and women may have the same job title, they still do not perform the same type of work tasks (Yun et al., 2001). Today, women are probably more often exposed to monotonous repetitive, and heavy work tasks than men, e.g. Health care personnel, cashiers, cleaners, and sewing machine operators (SMOs) (Brisson et al., 1989 and Dahlberg et al., 2004). Sewing machine operation includes jobs that involve operating power sewing machines to sew, alter or repair wearing apparel, linens, blankets, and other fabric articles. This includes operation of automatic sewing machines when the operator must know how to thread the machine, wind bobbins, adjust tension, and oil parts. Sewing machine operators use hands to handle, control, or feel objects, and tools; sit for long periods of time, and repeat the same motions (Kaergaard and Andersen, 2000 and Wang et al., 2007). For this reason, a high prevalence of musculoskeletal symptoms of neck, shoulder, back, hand/fingers and lower extremities have been found in studies of female SMOs (Kaergaard and Andersen, 2000, Brisson et al., 1989, Kilroy and Dockrell, 2000 and Vihma, 1982). Turkey, in which this study was conducted, is a developing country with a population of 68 million. Half of Turkey’s population is composed of women, 19% of these women (5.7 million) are illiterate (Esin and Öztürk, 2005 and Ministry of labour and social security, 2005). While the participation of women in the labour force was 28% in 1988, this percentage decreased to 24.5% in 2004. Of the working women, 77% are family workers without pay and 14% are employed as industrial workers (Esin and Öztürk, 2005). Working women in Turkey have a lot of problems concerning wages, employment, working conditions and social benefits. The vast majority of women working in industry are employed in textiles. Being the most developed sector in Turkey, the textile industry has a key role in its economy. There are approximately 4–5 million registered employees in the textiles industry in Turkey. However, the actual number is estimated to be 7–8 million, together with the unregistered workers. Of these employees, 10.9% are women and most of these women work as SMOs. Some studies place, MSD prevalence between 32% and 60% for all employees. It is predicted that this percentage is higher among female employees (Açık et al., 2004, Bilgütay et al., 2004, Çivitci et al., 2004 and Tüzün et al., 2004). However, research with working women is not sufficient. In particular, there is almost no information about MSD prevalence in working women. Also, there are insufficient studies which have used reliable ergonomic risk assessment methods of risk prevention. The findings from the studies to be conducted into this issue will make it possible for those providing occupational health services such as occupational health nurses and occupational physicians to learn about ergonomic risk assessment methods. The study was conducted on female SMOs, who are assumed to display higher MSD prevalence. The aim of this cross-sectional study was: 1)To determine MSD prevalence among female SMOs in Turkey using a modified version of Nordic Musculoskeletal Questionnaire (NMQ), 2)To examine the level of ergonomic workplace risk factors by using the Rapid Upper Limb Assessment (RULA), 3)To investigate the relationship between MSDs and demographic factors, work characteristics, and RULA scores.

Although the effect of etiological mechanisms on causing MSDs is still poorly understood, studies have provided evidence that environmental factors and personal factors have an effect on the occurrence of MSDs. We confirmed some of these relationships in our study. In addition the RULA method for the determination of ergonomic risks before the emergence of MSDs was established as quite reliable and easy to use in this study. The women participating in this research were found to have a high level of both MSDs and ergonomic risks. These findings can be used to guide MSD prevention efforts for garment workers in Turkey.