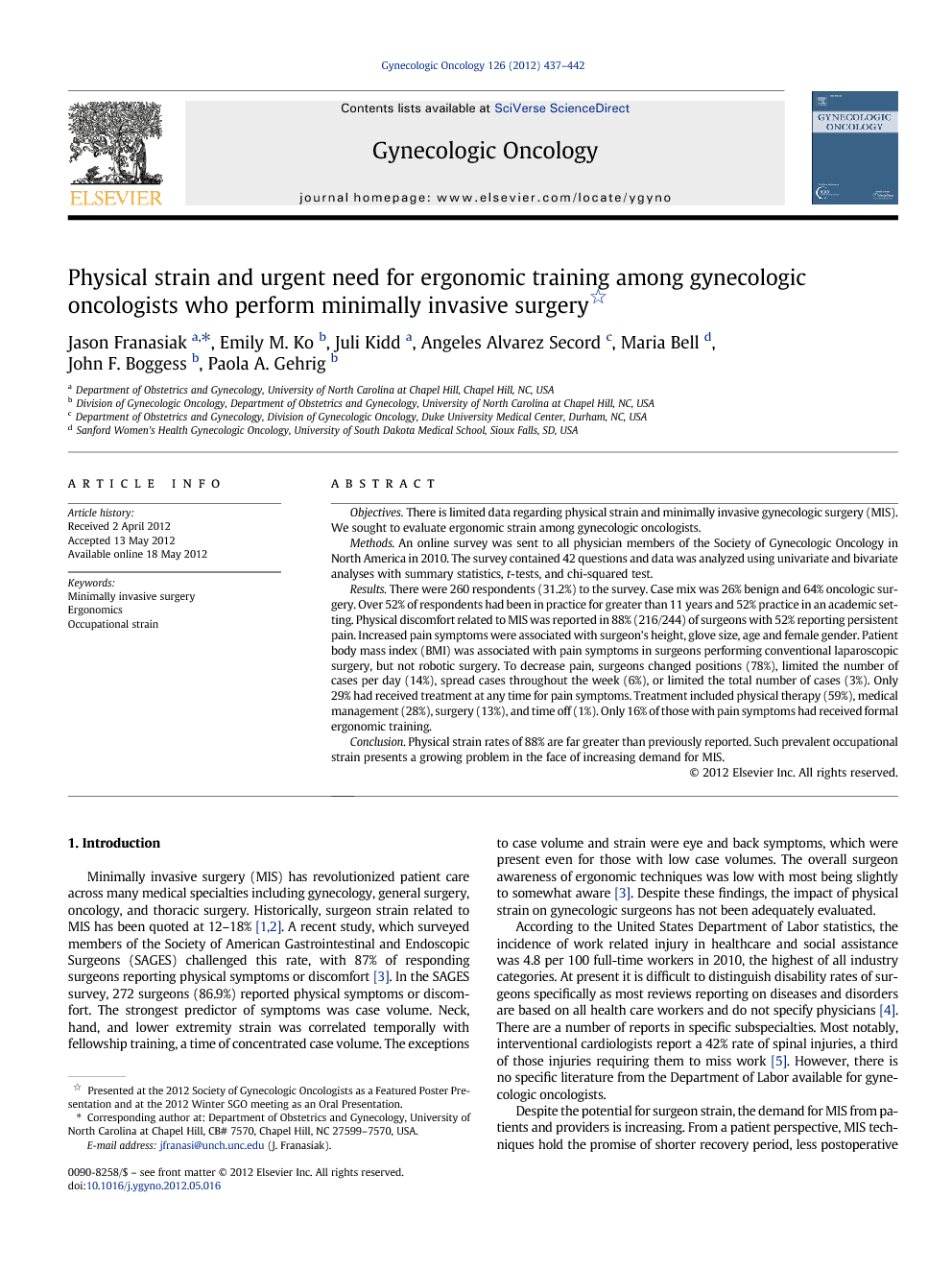 Objectives There is limited data regarding physical strain and minimally invasive gynecologic surgery (MIS). We sought to evaluate ergonomic strain among gynecologic oncologists. Methods An online survey was sent to all physician members of the Society of Gynecologic Oncology in North America in 2010. The survey contained 42 questions and data was analyzed using univariate and bivariate analyses with summary statistics, t-tests, and chi-squared test. Results There were 260 respondents (31.2%) to the survey. Case mix was 26% benign and 64% oncologic surgery. Over 52% of respondents had been in practice for greater than 11 years and 52% practice in an academic setting. Physical discomfort related to MIS was reported in 88% (216/244) of surgeons with 52% reporting persistent pain. Increased pain symptoms were associated with surgeon's height, glove size, age and female gender. Patient body mass index (BMI) was associated with pain symptoms in surgeons performing conventional laparoscopic surgery, but not robotic surgery. To decrease pain, surgeons changed positions (78%), limited the number of cases per day (14%), spread cases throughout the week (6%), or limited the total number of cases (3%). Only 29% had received treatment at any time for pain symptoms. Treatment included physical therapy (59%), medical management (28%), surgery (13%), and time off (1%). Only 16% of those with pain symptoms had received formal ergonomic training. Conclusion Physical strain rates of 88% are far greater than previously reported. Such prevalent occupational strain presents a growing problem in the face of increasing demand for MIS.

Minimally invasive surgery (MIS) has revolutionized patient care across many medical specialties including gynecology, general surgery, oncology, and thoracic surgery. Historically, surgeon strain related to MIS has been quoted at 12–18% [1] and [2]. A recent study, which surveyed members of the Society of American Gastrointestinal and Endoscopic Surgeons (SAGES) challenged this rate, with 87% of responding surgeons reporting physical symptoms or discomfort [3]. In the SAGES survey, 272 surgeons (86.9%) reported physical symptoms or discomfort. The strongest predictor of symptoms was case volume. Neck, hand, and lower extremity strain was correlated temporally with fellowship training, a time of concentrated case volume. The exceptions to case volume and strain were eye and back symptoms, which were present even for those with low case volumes. The overall surgeon awareness of ergonomic techniques was low with most being slightly to somewhat aware [3]. Despite these findings, the impact of physical strain on gynecologic surgeons has not been adequately evaluated. According to the United States Department of Labor statistics, the incidence of work related injury in healthcare and social assistance was 4.8 per 100 full-time workers in 2010, the highest of all industry categories. At present it is difficult to distinguish disability rates of surgeons specifically as most reviews reporting on diseases and disorders are based on all health care workers and do not specify physicians [4]. There are a number of reports in specific subspecialties. Most notably, interventional cardiologists report a 42% rate of spinal injuries, a third of those injuries requiring them to miss work [5]. However, there is no specific literature from the Department of Labor available for gynecologic oncologists. Despite the potential for surgeon strain, the demand for MIS from patients and providers is increasing. From a patient perspective, MIS techniques hold the promise of shorter recovery period, less postoperative pain, and potentially fewer operative complications [6] and [7]. These improvements allow patients and their caregivers to return to their pre-operative level of functioning in a shorter period of time [8]. Prospective data from the Gynecologic Oncology Group (GOG) LAP-2 trial showed that there are benefits from MIS in the immediate post-operative period [7]. Additionally, in the face of the obesity epidemic, there is a perception that MIS techniques may be particularly beneficial in this medically compromised patient population, which will only serve to further increase demand. Given this trend of increasing MIS volume in gynecologic oncology, with some reports showing a four-fold increase in case volume, and reports in other surgical disciplines of significant physical discomfort, there is a need for information related to strain and work related injuries in gynecologic oncologists [9]. While there is widely held belief that MIS causes greater strain on surgeons than open surgery, there is no data specific to gynecologic surgery, which encompasses a large volume of MIS operative cases in the United States. For this reason we sought to provide information about occupational injury incurred while performing minimally invasive gynecologic surgery in hopes of providing a forum to decrease the incidence of ergonomic strain in the future.

Physical strain rates of 88% are far greater than previously reported. Such prevalent occupational strain presents a growing problem in the face of increasing demand for MIS.