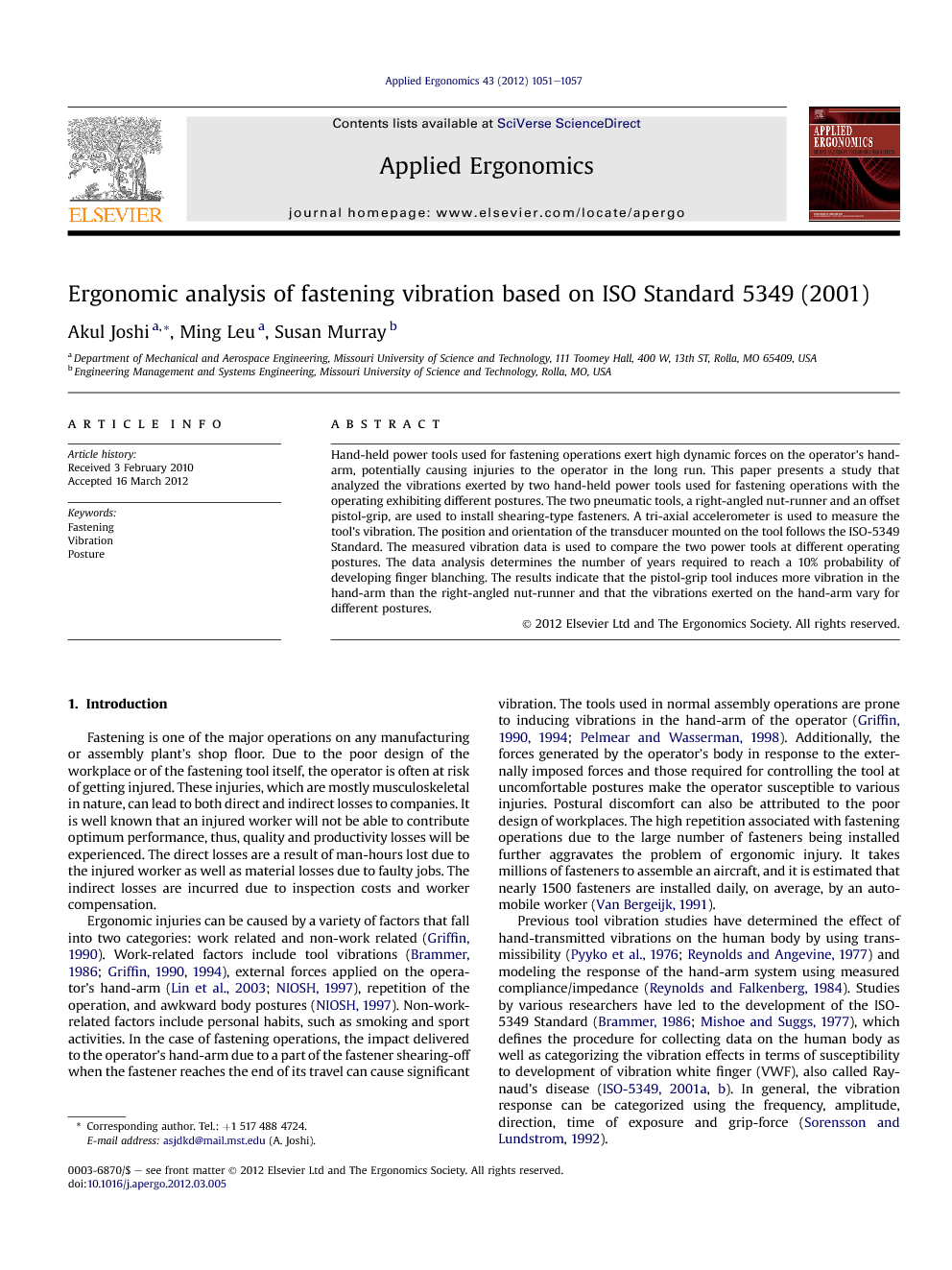 Hand-held power tools used for fastening operations exert high dynamic forces on the operator's hand-arm, potentially causing injuries to the operator in the long run. This paper presents a study that analyzed the vibrations exerted by two hand-held power tools used for fastening operations with the operating exhibiting different postures. The two pneumatic tools, a right-angled nut-runner and an offset pistol-grip, are used to install shearing-type fasteners. A tri-axial accelerometer is used to measure the tool's vibration. The position and orientation of the transducer mounted on the tool follows the ISO-5349 Standard. The measured vibration data is used to compare the two power tools at different operating postures. The data analysis determines the number of years required to reach a 10% probability of developing finger blanching. The results indicate that the pistol-grip tool induces more vibration in the hand-arm than the right-angled nut-runner and that the vibrations exerted on the hand-arm vary for different postures.

Fastening is one of the major operations on any manufacturing or assembly plant's shop floor. Due to the poor design of the workplace or of the fastening tool itself, the operator is often at risk of getting injured. These injuries, which are mostly musculoskeletal in nature, can lead to both direct and indirect losses to companies. It is well known that an injured worker will not be able to contribute optimum performance, thus, quality and productivity losses will be experienced. The direct losses are a result of man-hours lost due to the injured worker as well as material losses due to faulty jobs. The indirect losses are incurred due to inspection costs and worker compensation. Ergonomic injuries can be caused by a variety of factors that fall into two categories: work related and non-work related (Griffin, 1990). Work-related factors include tool vibrations (Brammer, 1986; Griffin, 1990, 1994), external forces applied on the operator's hand-arm (Lin et al., 2003; NIOSH, 1997), repetition of the operation, and awkward body postures (NIOSH, 1997). Non-work-related factors include personal habits, such as smoking and sport activities. In the case of fastening operations, the impact delivered to the operator's hand-arm due to a part of the fastener shearing-off when the fastener reaches the end of its travel can cause significant vibration. The tools used in normal assembly operations are prone to inducing vibrations in the hand-arm of the operator (Griffin, 1990, 1994; Pelmear and Wasserman, 1998). Additionally, the forces generated by the operator's body in response to the externally imposed forces and those required for controlling the tool at uncomfortable postures make the operator susceptible to various injuries. Postural discomfort can also be attributed to the poor design of workplaces. The high repetition associated with fastening operations due to the large number of fasteners being installed further aggravates the problem of ergonomic injury. It takes millions of fasteners to assemble an aircraft, and it is estimated that nearly 1500 fasteners are installed daily, on average, by an automobile worker (Van Bergeijk, 1991). Previous tool vibration studies have determined the effect of hand-transmitted vibrations on the human body by using transmissibility (Pyyko et al., 1976; Reynolds and Angevine, 1977) and modeling the response of the hand-arm system using measured compliance/impedance (Reynolds and Falkenberg, 1984). Studies by various researchers have led to the development of the ISO-5349 Standard (Brammer, 1986; Mishoe and Suggs, 1977), which defines the procedure for collecting data on the human body as well as categorizing the vibration effects in terms of susceptibility to development of vibration white finger (VWF), also called Raynaud's disease (ISO-5349, 2001a, b). In general, the vibration response can be categorized using the frequency, amplitude, direction, time of exposure and grip-force (Sorensson and Lundstrom, 1992). Vibrations transmitted to the hand-arm caused by the use of power tools in fastening operations have been studied before. However, these studies were mostly limited to high-impact operations using tools such as impact wrenches (Bovenzi et al., 1997) and rivet-guns (Burdof and Monster, 1991; Dandanell and Engstrom, 1986; Jorgensen and Muthukurappan, 2005; Kattel and Fernandez, 1999). Typically, these tools have high vibration inputs of about 12 m/s2 in daily exposure (Burdof and Monster, 1991). However, to our knowledge there has not been any study that analyzed the vibration effects of power tools used for fastening common types of fasteners such as the ones used in this study. There is no vibration data available for an ergonomic analysis of such fasteners as lock nuts, lock bolts and hi-lock bolts used in the aerospace industry. The present paper describes an investigation of the ergonomic effects of using power tools for fastening operations commonly used in aircraft assembly. The paper describes the experiment for measuring vibration and the analysis used to determine the number of years taken to develop a 10% probability of finger blanching, following the ISO-5349 Standard. The amounts of hand-transmitted vibrations at different postures are measured and compared.