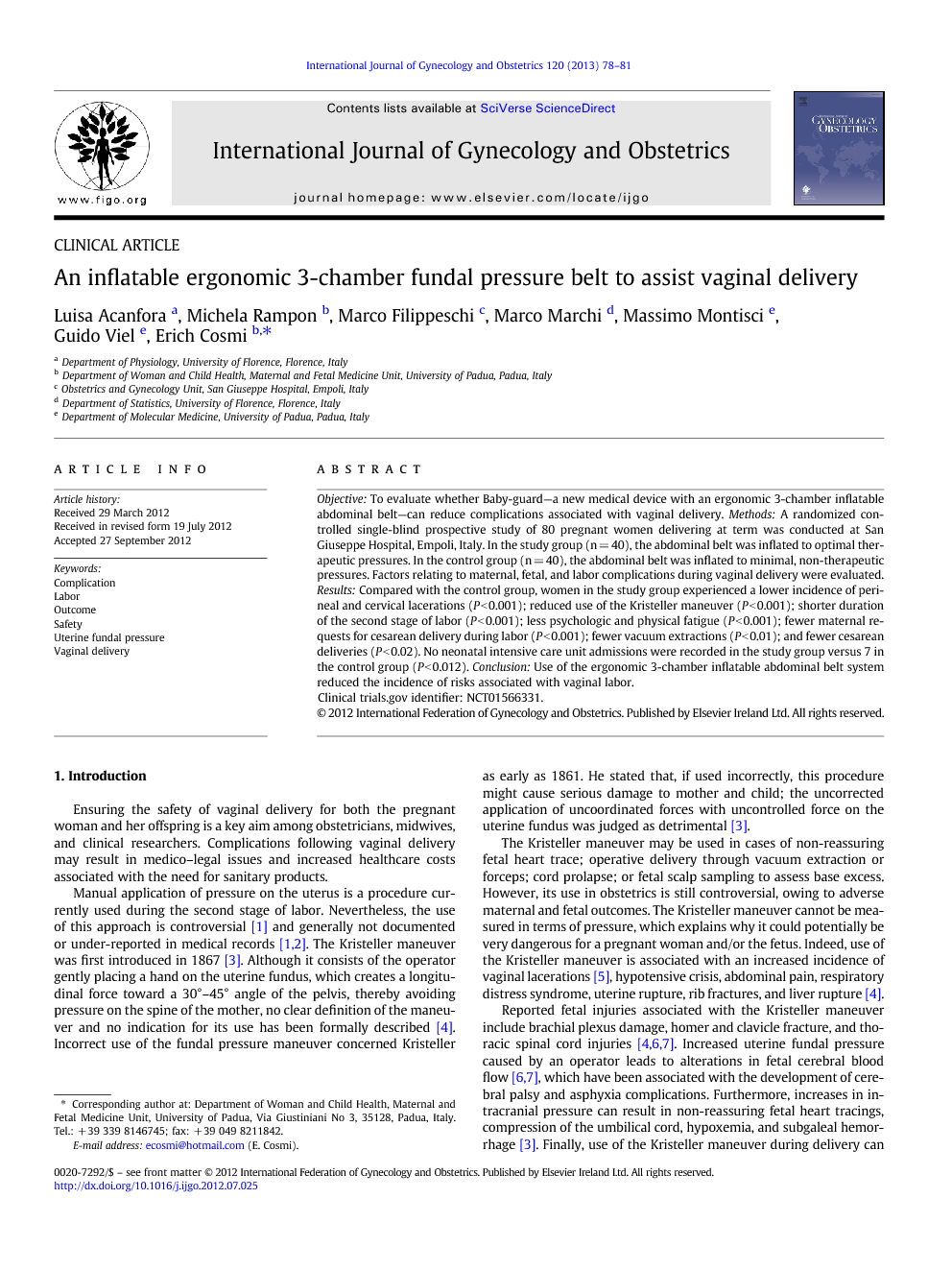 Ensuring the safety of vaginal delivery for both the pregnant woman and her offspring is a key aim among obstetricians, midwives, and clinical researchers. Complications following vaginal delivery may result in medico–legal issues and increased healthcare costs associated with the need for sanitary products. Manual application of pressure on the uterus is a procedure currently used during the second stage of labor. Nevertheless, the use of this approach is controversial [1] and generally not documented or under-reported in medical records [1] and [2]. The Kristeller maneuver was first introduced in 1867 [3]. Although it consists of the operator gently placing a hand on the uterine fundus, which creates a longitudinal force toward a 30°–45° angle of the pelvis, thereby avoiding pressure on the spine of the mother, no clear definition of the maneuver and no indication for its use has been formally described [4]. Incorrect use of the fundal pressure maneuver concerned Kristeller as early as 1861. He stated that, if used incorrectly, this procedure might cause serious damage to mother and child; the uncorrected application of uncoordinated forces with uncontrolled force on the uterine fundus was judged as detrimental [3]. The Kristeller maneuver may be used in cases of non-reassuring fetal heart trace; operative delivery through vacuum extraction or forceps; cord prolapse; or fetal scalp sampling to assess base excess. However, its use in obstetrics is still controversial, owing to adverse maternal and fetal outcomes. The Kristeller maneuver cannot be measured in terms of pressure, which explains why it could potentially be very dangerous for a pregnant woman and/or the fetus. Indeed, use of the Kristeller maneuver is associated with an increased incidence of vaginal lacerations [5], hypotensive crisis, abdominal pain, respiratory distress syndrome, uterine rupture, rib fractures, and liver rupture [4]. Reported fetal injuries associated with the Kristeller maneuver include brachial plexus damage, homer and clavicle fracture, and thoracic spinal cord injuries [4], [6] and [7]. Increased uterine fundal pressure caused by an operator leads to alterations in fetal cerebral blood flow [6] and [7], which have been associated with the development of cerebral palsy and asphyxia complications. Furthermore, increases in intracranial pressure can result in non-reassuring fetal heart tracings, compression of the umbilical cord, hypoxemia, and subgaleal hemorrhage [3]. Finally, use of the Kristeller maneuver during delivery can promote shoulder dystocia [8] and [9], particularly when associated with vacuum or forceps extraction procedures. Given the potential limitations of the Kristeller maneuver, it seems clear that the development of a novel method to modulate uterine fundal pressure could be of help during labor [10] and [11]. The Baby-guard system (Cabel, Pistoia, Italy) is a new medical device engineered after studies of biomechanics and biophysics, following obstetric semiotics. Through its ergonomic 3-chamber inflatable abdominal belt, the Baby-guard system applies pressure on the uterine fundus during the second stage of labor toward the pelvic outlet. The aim of the present study was, therefore, to determine whether use of the Baby-guard system improves maternal and fetal outcomes during vaginal delivery.