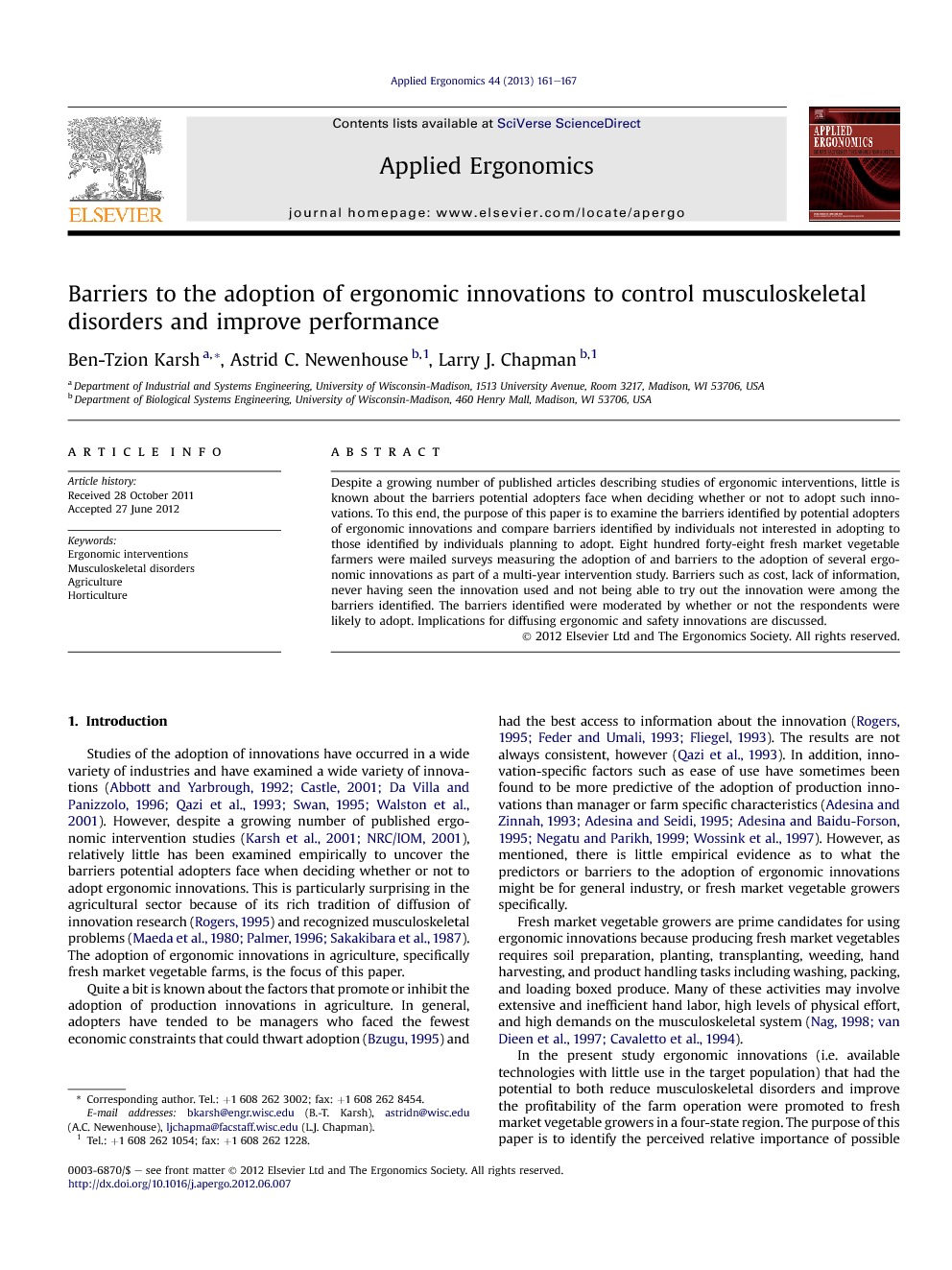 Studies of the adoption of innovations have occurred in a wide variety of industries and have examined a wide variety of innovations (Abbott and Yarbrough, 1992, Castle, 2001, Da Villa and Panizzolo, 1996, Qazi et al., 1993, Swan, 1995 and Walston et al., 2001). However, despite a growing number of published ergonomic intervention studies (Karsh et al., 2001 and National Research Council and Institute of Medcine, 2001), relatively little has been examined empirically to uncover the barriers potential adopters face when deciding whether or not to adopt ergonomic innovations. This is particularly surprising in the agricultural sector because of its rich tradition of diffusion of innovation research (Rogers, 1995) and recognized musculoskeletal problems (Maeda et al., 1980, Palmer, 1996 and Sakakibara et al., 1987). The adoption of ergonomic innovations in agriculture, specifically fresh market vegetable farms, is the focus of this paper. Quite a bit is known about the factors that promote or inhibit the adoption of production innovations in agriculture. In general, adopters have tended to be managers who faced the fewest economic constraints that could thwart adoption (Bzugu, 1995) and had the best access to information about the innovation (Rogers, 1995, Feder and Umali, 1993 and Fliegel, 1993). The results are not always consistent, however (Qazi et al., 1993). In addition, innovation-specific factors such as ease of use have sometimes been found to be more predictive of the adoption of production innovations than manager or farm specific characteristics (Adesina and Zinnah, 1993, Adesina and Seidi, 1995, Adesina and Baidu-Forson, 1995, Negatu and Parikh, 1999 and Wossink et al., 1997). However, as mentioned, there is little empirical evidence as to what the predictors or barriers to the adoption of ergonomic innovations might be for general industry, or fresh market vegetable growers specifically. Fresh market vegetable growers are prime candidates for using ergonomic innovations because producing fresh market vegetables requires soil preparation, planting, transplanting, weeding, hand harvesting, and product handling tasks including washing, packing, and loading boxed produce. Many of these activities may involve extensive and inefficient hand labor, high levels of physical effort, and high demands on the musculoskeletal system (Nag, 1998, van Dieen et al., 1997 and Cavaletto et al., 1994). In the present study ergonomic innovations (i.e. available technologies with little use in the target population) that had the potential to both reduce musculoskeletal disorders and improve the profitability of the farm operation were promoted to fresh market vegetable growers in a four-state region. The purpose of this paper is to identify the perceived relative importance of possible barriers to the adoption of five ergonomic innovations. Farmers who reported being unlikely to adopt were believed to be in the awareness stage, persuasion stage, or decision stage, while those reporting that they were planning to adopt were in the persuasion or decision stage (Rogers, 1995). Those two groups were likely to have different barriers preventing them from having adopted the innovation, because as Rogers (1995) points out, the informational needs of individuals at the different stages are different. It was hypothesized that the barriers identified by farmers who intended to adopt an innovation in the future would be different from those identified by farmers who stated they did not intend to adopt the innovation in the near future.