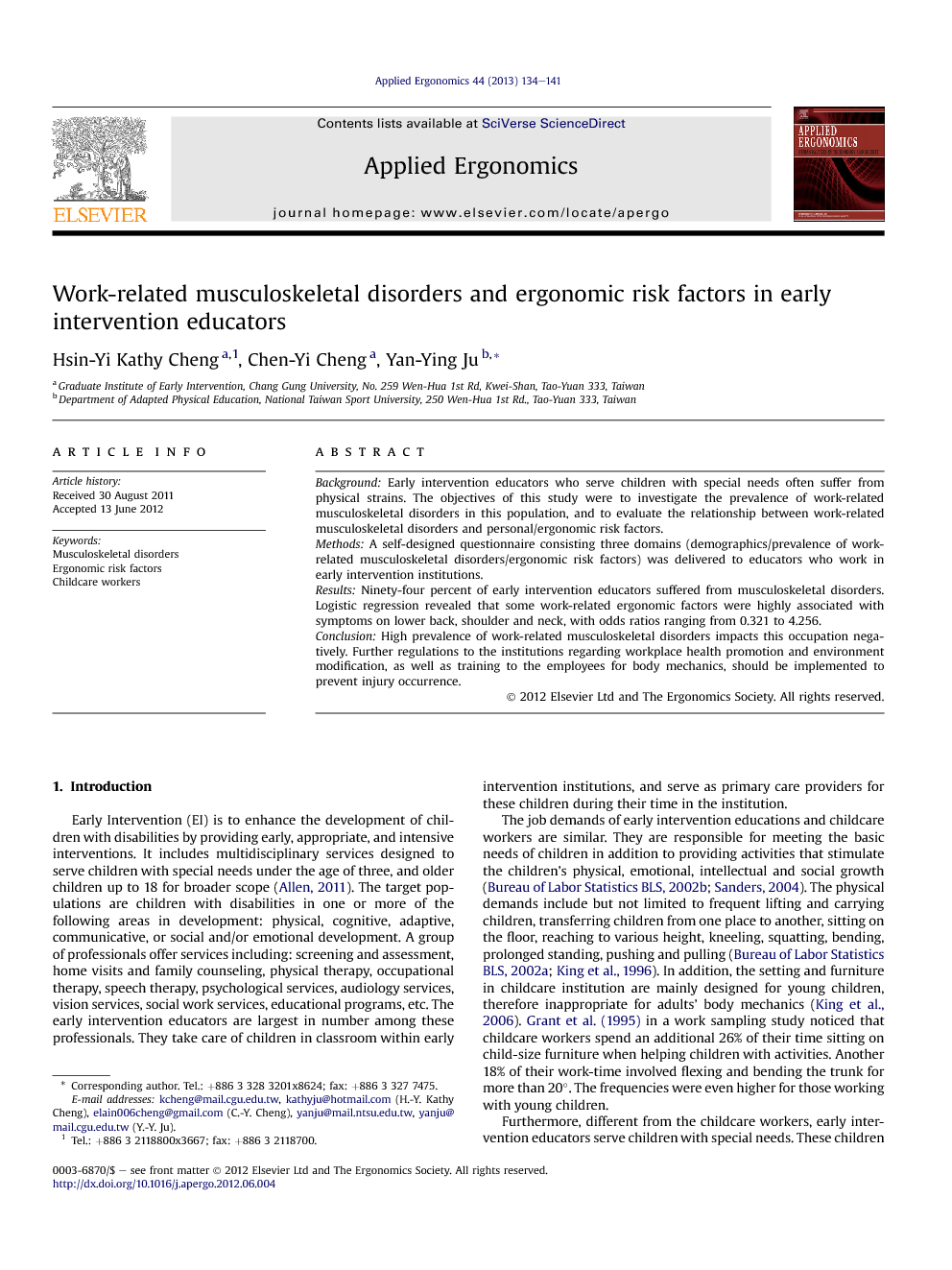 Early Intervention (EI) is to enhance the development of children with disabilities by providing early, appropriate, and intensive interventions. It includes multidisciplinary services designed to serve children with special needs under the age of three, and older children up to 18 for broader scope (Allen, 2011). The target populations are children with disabilities in one or more of the following areas in development: physical, cognitive, adaptive, communicative, or social and/or emotional development. A group of professionals offer services including: screening and assessment, home visits and family counseling, physical therapy, occupational therapy, speech therapy, psychological services, audiology services, vision services, social work services, educational programs, etc. The early intervention educators are largest in number among these professionals. They take care of children in classroom within early intervention institutions, and serve as primary care providers for these children during their time in the institution. The job demands of early intervention educations and childcare workers are similar. They are responsible for meeting the basic needs of children in addition to providing activities that stimulate the children's physical, emotional, intellectual and social growth (Bureau of Labor Statistics BLS, 2002b; Sanders, 2004). The physical demands include but not limited to frequent lifting and carrying children, transferring children from one place to another, sitting on the floor, reaching to various height, kneeling, squatting, bending, prolonged standing, pushing and pulling (Bureau of Labor Statistics BLS, 2002a; King et al., 1996). In addition, the setting and furniture in childcare institution are mainly designed for young children, therefore inappropriate for adults' body mechanics (King et al., 2006). Grant et al. (1995) in a work sampling study noticed that childcare workers spend an additional 26% of their time sitting on child-size furniture when helping children with activities. Another 18% of their work-time involved flexing and bending the trunk for more than 20°. The frequencies were even higher for those working with young children. Furthermore, different from the childcare workers, early intervention educators serve children with special needs. These children are delayed in development thus require much more assistance in daily routine. First, they are more likely to be obese than their typically developing peers before age 3, and this risk gradually increases between 3 and 5 years of age (Emerson, 2009). Second, many of them exhibit abnormal muscle tone. Taking care of children with abnormal muscle tone demands greater physical effort when carrying, diaper changing, feeding, positioning, and stretching. Furthermore, some of them need help donning and doffing of assistive devices such as ankle-foot orthosis or lower extremity brace, and require a lot more assistance in self-mobility. These factors lead early intervention educators to a higher chance of acquiring work-related musculoskeletal disorders. Work-related musculoskeletal disorders (WMSDs), defined as a subset of musculoskeletal disorders (MSDs) that arise out of occupational exposures, may lead to work restriction, work-time loss, or consequently cause work leave (Forde et al., 2002). They have been reported among other health care professionals (Ando et al., 2000; Darragh et al., 2009; Ju et al., 2011; Owen, 1994; Pompeii et al., 2009). Investigations on WMSDs in nursing staff reported a prevalence rate of 70–90% (Ando et al., 2000; Smith et al., 2004; Trinkoff et al., 2002). Among the listed disorders, prevalence of low back pain was the highest, followed by neck, shoulder and extremity pain. However, there is a paucity of literature on the prevalence of WMSDs in childcare workers, such as early intervention educators. Grant et al. (1995) investigated a small sample (n = 22) of childcare workers and reported 78% of musculoskeletal pain or discomfort. On the contrary, Bureau of Labor Statistics (BLS) (2002b) reported an injury rate of only 2.6% among childcare workers. The wide discrepancy might originated from a number of reasons, such as taking different cut point of WMSD severity for data inclusion (Sanders, 2004). To date, most of the literature regarding childcare workers reported the relation between musculoskeletal symptoms and injury biomechanics (Brown and Gerberich, 1993; Gratz et al., 2002; King et al., 2006; Kumagai et al., 1998; Muto et al., 2006; Owen, 1994). Low back pain was the most frequently reported disorders (Gratz et al., 2002; King et al., 2006; Muto et al., 2006), and the main reason was associated with lifting children. However, no specific attention was paid to the prevalence of WMSDs in early intervention educators considering the potential ergonomic risk factors. Therefore, the purposes of this study were to survey the prevalence of WMSDs in early intervention educators, and to investigate the relationships of WMSDs with their personal and institutional data and occupational ergonomics, and to indentify whether these variables served as the contributing or predicting factors to WMSDs. The authors hypothesized that the occurrence of WMSDs would have significant impacts on WMSD-related consequences such as causing sick leaves, considering job change and affecting work performance.

High prevalence of work-related musculoskeletal disorders impacts this occupation negatively. Further regulations to the institutions regarding workplace health promotion and environment modification, as well as training to the employees for body mechanics, should be implemented to prevent injury occurrence.