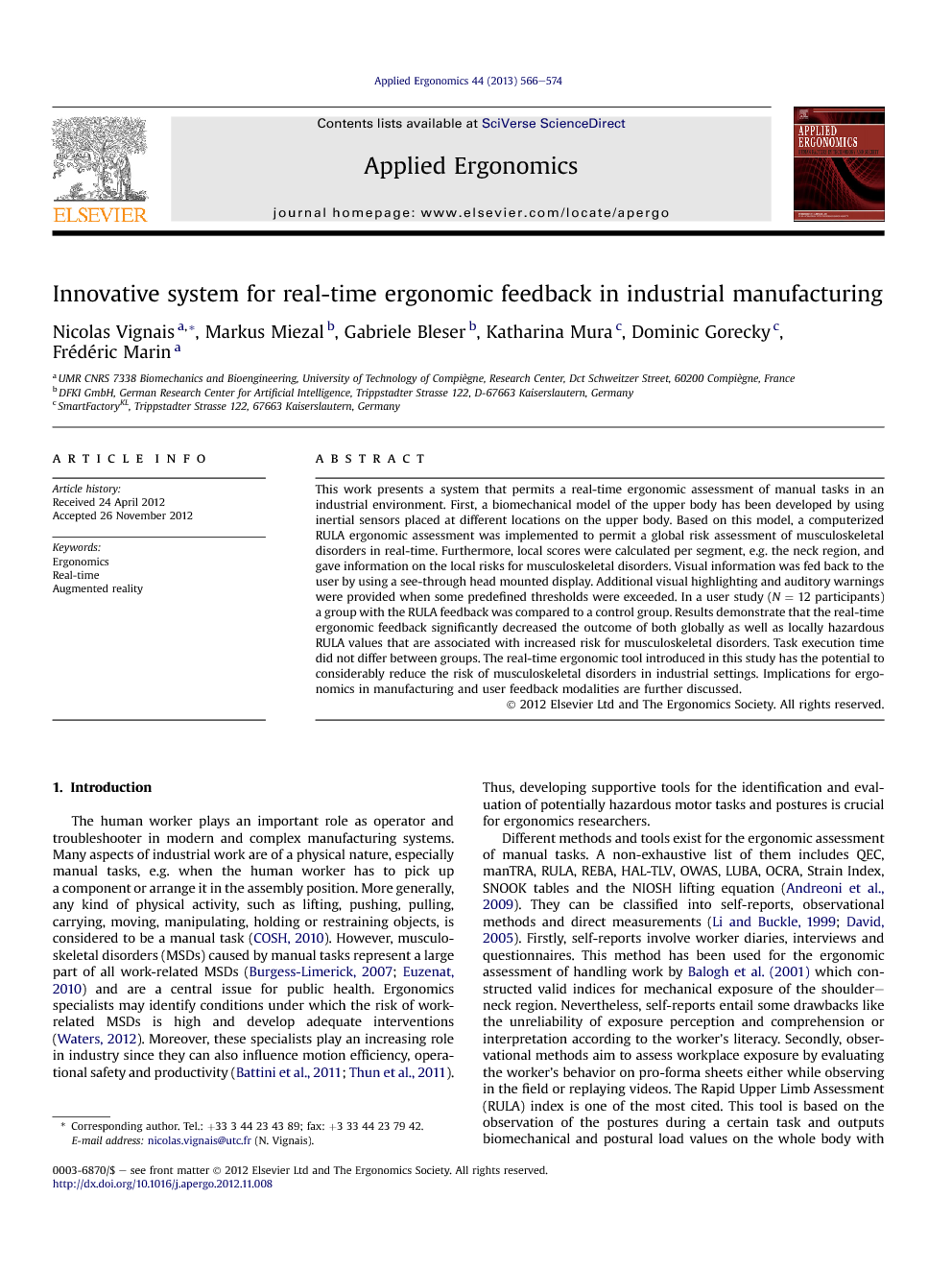 This work presents a system that permits a real-time ergonomic assessment of manual tasks in an industrial environment. First, a biomechanical model of the upper body has been developed by using inertial sensors placed at different locations on the upper body. Based on this model, a computerized RULA ergonomic assessment was implemented to permit a global risk assessment of musculoskeletal disorders in real-time. Furthermore, local scores were calculated per segment, e.g. the neck region, and gave information on the local risks for musculoskeletal disorders. Visual information was fed back to the user by using a see-through head mounted display. Additional visual highlighting and auditory warnings were provided when some predefined thresholds were exceeded. In a user study (N = 12 participants) a group with the RULA feedback was compared to a control group. Results demonstrate that the real-time ergonomic feedback significantly decreased the outcome of both globally as well as locally hazardous RULA values that are associated with increased risk for musculoskeletal disorders. Task execution time did not differ between groups. The real-time ergonomic tool introduced in this study has the potential to considerably reduce the risk of musculoskeletal disorders in industrial settings. Implications for ergonomics in manufacturing and user feedback modalities are further discussed.

The human worker plays an important role as operator and troubleshooter in modern and complex manufacturing systems. Many aspects of industrial work are of a physical nature, especially manual tasks, e.g. when the human worker has to pick up a component or arrange it in the assembly position. More generally, any kind of physical activity, such as lifting, pushing, pulling, carrying, moving, manipulating, holding or restraining objects, is considered to be a manual task (COSH, 2010). However, musculoskeletal disorders (MSDs) caused by manual tasks represent a large part of all work-related MSDs (Burgess-Limerick, 2007; Euzenat, 2010) and are a central issue for public health. Ergonomics specialists may identify conditions under which the risk of work-related MSDs is high and develop adequate interventions (Waters, 2012). Moreover, these specialists play an increasing role in industry since they can also influence motion efficiency, operational safety and productivity (Battini et al., 2011; Thun et al., 2011). Thus, developing supportive tools for the identification and evaluation of potentially hazardous motor tasks and postures is crucial for ergonomics researchers. Different methods and tools exist for the ergonomic assessment of manual tasks. A non-exhaustive list of them includes QEC, manTRA, RULA, REBA, HAL-TLV, OWAS, LUBA, OCRA, Strain Index, SNOOK tables and the NIOSH lifting equation (Andreoni et al., 2009). They can be classified into self-reports, observational methods and direct measurements (Li and Buckle, 1999; David, 2005). Firstly, self-reports involve worker diaries, interviews and questionnaires. This method has been used for the ergonomic assessment of handling work by Balogh et al. (2001) which constructed valid indices for mechanical exposure of the shoulder–neck region. Nevertheless, self-reports entail some drawbacks like the unreliability of exposure perception and comprehension or interpretation according to the worker's literacy. Secondly, observational methods aim to assess workplace exposure by evaluating the worker's behavior on pro-forma sheets either while observing in the field or replaying videos. The Rapid Upper Limb Assessment (RULA) index is one of the most cited. This tool is based on the observation of the postures during a certain task and outputs biomechanical and postural load values on the whole body with particular attention to the neck, trunk and upper limbs (McAtamney and Corlett, 1993). Observational methods based on videotaped work sequences analyze different kinds of manual tasks with specific software (Yen and Radwin, 1995; Chang et al., 2010; Radwin, 2011). Observational methods are affordable and practical for use in a wide range of professional situations (David, 2005). However, the scoring system may be questionable according to limited original epidemiological data. Video-based observational methods are also time consuming. Direct methods, in contrast, measure the risk of exposure in real-time by using sensors directly attached to the worker's body. Some of these methods have been employed to study upper limbs (Radwin and Lin, 1993; Freivalds et al., 2000; Bernmark and Wiktorin, 2002). Nevertheless, all these methods require a complex and cost-intensive hardware setup and a lot of effort to analyze and interpret recorded data in real-time (David, 2005). As a consequence, the ergonomic evaluation of the directly assessed behavior has to be performed offline. Yet, postural evaluation that can be carried out in real-time provides benefits in practice (Mullineaux et al., 2012). If the system provides the worker with information concerning his current ergonomic behavior, then postures could be modified immediately. Furthermore, in the long run, associations between certain postures and their hazardousness could be learned. In order to receive the immediate feedback, Augmented Reality (AR) technology can be used during the actual work execution (Udani et al., 2012). Recent developments in sensor technology offer potential for regular industrial use in contrast to other tracking devices, such as range cameras or magnetic sensors, that are more effective in virtual environments (Ray and Teizer, 2012; Jayaram et al., 2006). For instance, an inertial measurement unit (IMUs) is a small-sized, inexpensive and low-power device suitable for monitoring the kinematics of a segment in real-time (Breen et al., 2009). If several inertial measurement units are connected, biomechanical models can be developed to capture a wide range of movements (Roetenberg et al., 2009). The aim of this study is to introduce an innovative and practical system for ergonomic assessment of a worker's activity in real-time. The worker's movements are recorded by using a lightweight sensor network composed of synchronized inertial measurements units (IMUs) and goniometers linked to an upper body biomechanical model. In order to perform the ergonomic evaluation in real-time, the RULA index is continuously computed from this biomechanical model. The RULA assessment is simultaneously fed back to the user via a see-through head-mounted display (STHMD). A user study was conducted in order to reveal the influence of the proposed ergonomic feedback on workers' motions during manual task execution.

This study presented an innovative system permitting real-time ergonomic assessment and feedback in an industrial environment. Based on a biomechanical model of the upper body and parameter estimation from body-worn IMU and goniometer data, RULA score computations have been implemented in order to assess the risk of exposure to MSDs in real-time during the movement. This new tool permitted global ergonomic evaluation, as well as calculating the risk of MSDs per articulation or segment. These global and local scores were fed back to the user in the form of auditory and visual warnings, respectively, in the case of hazardous postures. This real-time tool has been tested through a user study in which ergonomic variables have been compared between a group receiving real-time feedback (WR) and a control (WOR) group. Results demonstrated that the real-time ergonomic feedback significantly decreased the risk of MSDs at global and segmental levels. The real-time ergonomic tool presented in this study could be used to directly reduce the risk of MSDs in industry and to support and optimize the long-term performance of workers.