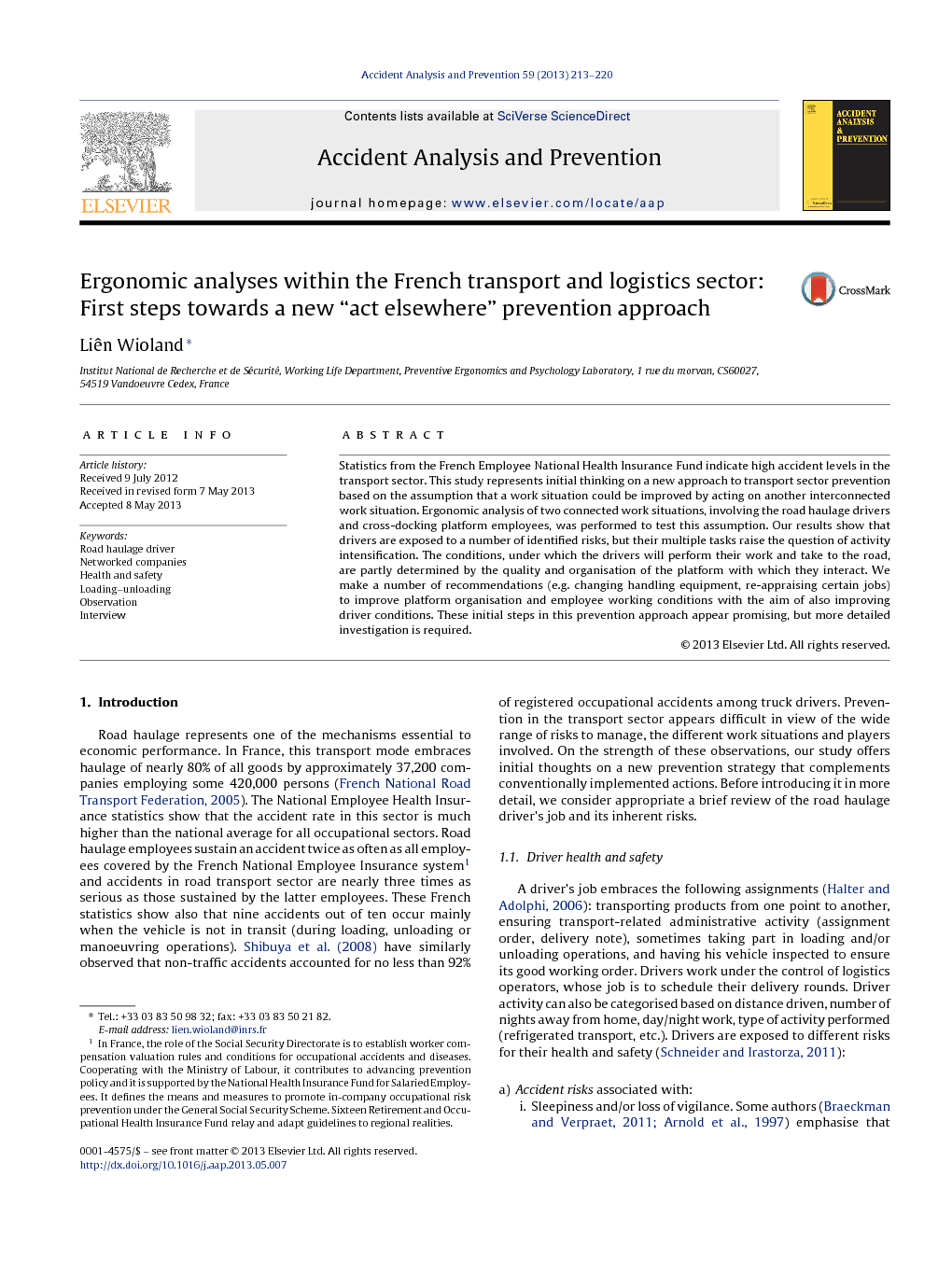 Statistics from the French Employee National Health Insurance Fund indicate high accident levels in the transport sector. This study represents initial thinking on a new approach to transport sector prevention based on the assumption that a work situation could be improved by acting on another interconnected work situation. Ergonomic analysis of two connected work situations, involving the road haulage drivers and cross-docking platform employees, was performed to test this assumption. Our results show that drivers are exposed to a number of identified risks, but their multiple tasks raise the question of activity intensification. The conditions, under which the drivers will perform their work and take to the road, are partly determined by the quality and organisation of the platform with which they interact. We make a number of recommendations (e.g. changing handling equipment, re-appraising certain jobs) to improve platform organisation and employee working conditions with the aim of also improving driver conditions. These initial steps in this prevention approach appear promising, but more detailed investigation is required.

Road haulage represents one of the mechanisms essential to economic performance. In France, this transport mode embraces haulage of nearly 80% of all goods by approximately 37,200 companies employing some 420,000 persons (French National Road Transport Federation, 2005). The National Employee Health Insurance statistics show that the accident rate in this sector is much higher than the national average for all occupational sectors. Road haulage employees sustain an accident twice as often as all employees covered by the French National Employee Insurance system1 and accidents in road transport sector are nearly three times as serious as those sustained by the latter employees. These French statistics show also that nine accidents out of ten occur mainly when the vehicle is not in transit (during loading, unloading or manoeuvring operations). Shibuya et al. (2008) have similarly observed that non-traffic accidents accounted for no less than 92% of registered occupational accidents among truck drivers. Prevention in the transport sector appears difficult in view of the wide range of risks to manage, the different work situations and players involved. On the strength of these observations, our study offers initial thoughts on a new prevention strategy that complements conventionally implemented actions. Before introducing it in more detail, we consider appropriate a brief review of the road haulage driver's job and its inherent risks. 1.1. Driver health and safety A driver's job embraces the following assignments (Halter and Adolphi, 2006): transporting products from one point to another, ensuring transport-related administrative activity (assignment order, delivery note), sometimes taking part in loading and/or unloading operations, and having his vehicle inspected to ensure its good working order. Drivers work under the control of logistics operators, whose job is to schedule their delivery rounds. Driver activity can also be categorised based on distance driven, number of nights away from home, day/night work, type of activity performed (refrigerated transport, etc.). Drivers are exposed to different risks for their health and safety (Schneider and Irastorza, 2011): a) Accident risks associated with: i. Sleepiness and/or loss of vigilance. Some authors (Braeckman and Verpraet, 2011 and Arnold et al., 1997) emphasise that sleepiness affects the drivers’ performance and safety. Studies have shown that accidents linked to reduced vigilance or falling asleep at the wheel represented 1/4 of accidents in Denmark (Shibuya et al., 2008 and Shibuya et al., 2010) and 1/3 of fatal accidents in the United States (Schulz, 1998). Moreover, these data would be widely under-estimated (Wylie et al., 1996, Klauer et al., 2006, Brock et al., 2005 and Gander et al., 2006) due to the difficulty in acquiring information on the cause of these types of accident. Sleepiness and/or loss-of-vigilance phenomena may be accentuated, when there is accumulated tiredness following physical effort during handling operations, changes of rhythm and/or irregular hours (work very early in the morning or very late in the evening). Surveys on the subject show that drivers acknowledge being tired (Wyckoff, 1979 and McCart et al., 2000). Baulk and Fletcher (2012) have suggested that more and better quality sleep is enjoyed at home rather than in the driver's truck. This risk therefore appears greater for drivers who spend multiple nights away from home. ii. Interactions with other drivers on the road, who may also cause accidents (Hakkanen and Summala, 2001 and Beanland et al., 2013). b) Physical risks involving exposure to the vibrations generated by the vehicle, prompting appearance of back pain and lumbar spinal disorders ( Bovenzi and Hulshof, 1999 and Thierry et al., 2008). c) Risks of developing musculoskeletal disorders during both handling operations performed when loading/unloading ( Thierry et al., 2008 and Schneider and Irastorza, 2011) and multiple manoeuvres around vehicles (including frequent climbing up and down from the vehicle cab). Allard et al. (1993) indicate that 45% of drivers questioned, who performed handling operations, complained of pain in the back, shoulder (26%) and ankle (24%), unlike those who did not perform this type of task. d) Psychosocial risks related to several factors: driving stress, feeling of solitude and dealing with hazards alone (Bourdarias, 2000), driver irregular work hours ( Hamelin, 2000 and Apostolopoulos et al., 2012) or even night work (Ulh and Marqueze, 2011) driver personal factors (life hygiene, smoking etc.) and risks of attack associated with type of goods transported. e) Risks of mental overload associated with regularly dealing with hazards: vehicle breakdowns, incidents on the road, constraints or incidents at clients, etc. ( Bourdarias, 2000 and Makishita and Matsunaga, 2008) 1.2. First steps towards a new prevention approach Our premise is that goods transit through a network of different companies starting with the supplier and ending with the final customer. We refer to different components and players of the supply chain, which can be other transport contractors or companies, different types of platform (crossdocking- or storage-type), warehouses, packaging or component assembly enterprises. These companies attempt to group together and set up more or less formal links in relation to needs (sub-contracting, collaboration, cooperation, subsidiaries, etc.). They are organised in networks of interconnected entities, each with its own specific structure and constraints (delivery times, traceability, quality, etc.). Some of the activities of these companies are dependent on the entities located upstream and downstream (Rorive, 2003, Mariotti, 2005, Jayaram and Xu, 2011 and Roh and Min, 2011). Our approach is based on the assumption that a work situation belonging to a network could also be improved by acting through another work situation also belonging to the same network. This is called an “act elsewhere” approach. Operationalising this assumption in the transport sector involves imagining that working conditions and driver health and safety could be improved by acting on the work situation (and employees) with which the drivers are required to interact (e.g. the customers they deliver to) (Fig. 1a and b). This approach is markedly different to the ergonomic approach usually implemented, which focuses on establishing a diagnosis and making recommendations specific to a “unique” work situation, defined both in time and geographically.

This study provides initial steps in new thinking on prevention strategy for companies organised in a network. We have tested this approach for the first time in the French transport and logistics sector. This work focused on the operator “in real-life working situation”, and used the “environmental situation” of the task as an experimental paradigm. Therefore, all the variables cannot be controlled as in a laboratory experiment, but the results based on observations are close to the reality of the workplace. In conclusion, our initial results are encouraging, but it is too early to generalise our findings. They show that working conditions of a category of road transport sector employees (in this case drivers) can broadly depend on the organisation and efficiency of other categories of employees (customers) with whom they interact. This prevention approach appears promising and forms a basis for action with multiple advantages. More specifically, it should enable: • Implementation of prevention measures designed for one work situation through beneficial action on another work situation. The advantage of this approach is that we can act on work situations, in which employees are not “directly” accessible, • Multiplication of prevention measure effects to encompass several work situations through implementation of recommendations for a single work situation. The effects involve different types of company, in particular small and medium haulage companies, of which there are many in the goods transport sector that do not necessarily have the resources to invest in prevention. The approach is promising, but it remains to be studied in greater depth, for example it would be interesting to study this phenomenon at other nodes in the supply chain. Furthermore, the method will need to be extended to other activity sectors, if results continue to be relevant. Nevertheless, we are already aware that certain difficulties will arise in relation to implementing the method and we are currently considering how the approach can be simplified to make it more accessible to prevention specialists.